Baker’s yeast vs brewer’s yeast is an age-old question that keeps popping up among the discourse between bakers and brewers alike. Even though both are products of a one-celled fungus, Saccharomyces cerevisiae, the question arises whenever there’s a discussion about nutritional supplements, recipes, baking, and brewing.

While there are similarities between the two, there are also enough factors that differentiate them from each other. We shall learn their characteristics and differences in this complete guide.

What Are the Differences Between Baker’s Yeast and Brewer’s Yeast?

What Is Baker’s Yeast Best For?

Baker’s yeast is best used in the baking industry; this is why it is sometimes known as bread yeast or baking yeast. Saccharomyces cerevisiae, popularly known as baker’s yeast, feeds on sugars to gain energy. In the process of feeding on sugar, they end up producing alcohol and carbon dioxide.

The process described above is called fermentation and forms the backbone of both baking as well as the brewing industry.

In the case of baker’s yeast, the alcohol generated dries out and evaporates to transform into a gaseous product. This, along with the carbon dioxide bubbles that get trapped in the dough, creates a lift that makes the dough rise, giving bread and pastry products their characteristic appearance.

The alcohol has another use for baking. It helps impart a wonderful aroma and flavor to the yeast-leavened bread along with other acids produced during the process of fermentation.

Baker’s yeast is available across grocery outlets in various different forms. These include:

This consists of a mass of live yeast cells that are dehydrated to a large extent with the use of heat. This produces a mass of dead cells surrounding some live and active yeast cells. To make active dry yeast usable, it must be dissolved using a liquid that is relatively warm.

The process, called proofing, peels off the dead outer layer of the cells and activates the living inner layer, rendering the product usable. Many yeast manufacturers consider proofing to be a redundant process and suggest active dry yeast be added directly to dry ingredients.

However, it is still a good practice to ensure that the yeast is alive and thus, active, before using it to bake anything. This is especially true if the yeast is sourced from a sub-optimal location or hasn’t been in use for a while. 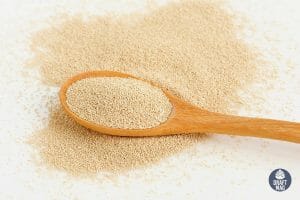 This is another type of dry yeast that is sometimes referred to as bread machine yeast. This does not need any proofing or activation process as the fine powdery substance can be seamlessly mixed in with dry ingredients. However, some bakers still prefer to activate instant yeast to ensure an even distribution across the dough.

However, it is important to note that the reverse of it is also true, wherein you will need to use 25 percent more active dry yeast as a substitute if the recipe mentions the amount of instant yeast to be used. Instant yeast and active dry yeast are both dry products and can be located next to dry baking ingredients like baking powder and flour in a grocery outlet.

This is often referred to as cake yeast or compressed yeast. Fresh yeast is called fresh because it consists solely of living cells that have not been dehydrated by any method. The finished product is a block of crumbly, soft, solid mass that must be dissolved while using it. Fresh yeast is also quite perishable and must be refrigerated whenever not in use.

It is quite a rare product available only at a few grocery outlets under the refrigerated section of the store. However, despite its rarity, fresh yeast is often the product of choice for professional bakers. Even though this is furiously debated, many bakers claim that using active yeast lends the bread a stronger and more distinct flavor, which is highly desirable. Practically, fresh yeast is often considered a yeast for special occasions and to be used only for holidays and festivals where the volume of baking is higher.

This is because baking more frequently uses up the available fresh yeast faster as their shelf lives are significantly lesser, especially compared to active dry yeast or instant yeast. When substituting fresh yeast for other types of yeasts, its quantity must be halved, and the other way around is true as well — the quantity of other dry yeasts must be doubled.

What Is Brewer’s Yeast Best For?

Brewer’s yeast is best for making fermented alcoholic beverages like wine or beer since it is made from the same unicellular fungus S.cerevisiae. Other than its obvious usage, it has also been cultivated for years as a nutritional supplement.

Unlike baker’s yeast, brewer’s yeast is rich in several nutrients, especially chromium, B-complex vitamins, protein, selenium, and other essential minerals in trace amounts that help in the maintenance of normal blood sugar levels in humans.

One more difference between brewer’s yeast and baker’s yeast, torula yeast, or nutritional yeast, is the fact that it’s bitter as it is a rich source of chromium.

As discussed earlier, brewer’s yeast, unlike other forms of yeast, is a rich source of several nutrients. This has several positive implications on human health. Some of the common benefits are discussed below:

Brewer’s yeast contains an array of B-complex groups of vitamins including B1 – thiamine, B2 – riboflavin, B3 – niacin, B5 – pantothenic acid, B6 – pyridoxine, B7 or H – biotin, and B9 – folic acid.

These vitamins help break down proteins, fats, and carbohydrates that are instrumental in supplying the body with energy. They also help keep the liver, mouth, eyes, hair, and skin healthy, maintain the muscles required to facilitate digestion, and support the normal functioning of the nervous system. It is worth noting that brewer’s yeast does not contain the essential vitamin B12 otherwise found in dairy products and meat.

People suffering from diabetes fall into two categories. Either their bodies cannot use the insulin – a hormone that helps process starch, sugar and other food types into energy — it makes or their bodies do not produce sufficient or any insulin whatsoever.

This results in either extremely high or low amounts of sugar in the patient’s bloodstream. Studies suggest that brewer’s yeast is rich in chromium, which may help regulate blood sugar levels, improve glucose tolerance, and even reduce blood sugar levels when required. This reduces the amount of insulin the body needs and helps counter diabetic symptoms.

However, researchers are yet to ascertain the component of baker’s yeast that helps regulate the blood cholesterol level of the human body.

Brewer’s yeast has several uses in maintaining ideal body weight. It is considered a rich source of protein and thus acts as an energy booster. Moreover, some studies have also attempted to establish the fat-reducing properties of baker’s yeast.

When consumed in conjunction with a well-balanced diet and regular physical activity, brewer’s yeast can be quite helpful in reaching and maintaining the ideal body weight.

Another study linked it to a lowered risk of skin cancer. And finally, it has also been found to improve skin quality as it fights against symptoms like acne.

Brewer’s yeast is available in several different forms including liquid, tablet, flakes and powder forms. It will depend on your intended usage – whether you are looking to brew an alcoholic beverage or using it as a health supplement – which one you end up choosing.

We have had a comprehensive account of brewer’s and baker’s yeast. Let us summarize our takeaways:

Ultimately, knowing the differences between these types of yeasts and their individual properties will guide you towards making the right choice. How you wish to use these yeasts will depend on your intended usage, so go ahead and bake that bread or brew that beer!