Dry beer is a brew with negligible or no sugar; it has nothing to do with the wetness or water quantity. Though dry beers were once founded at a Japanese brewery, many dry beers are now available across the USA, Canada, and Europe. 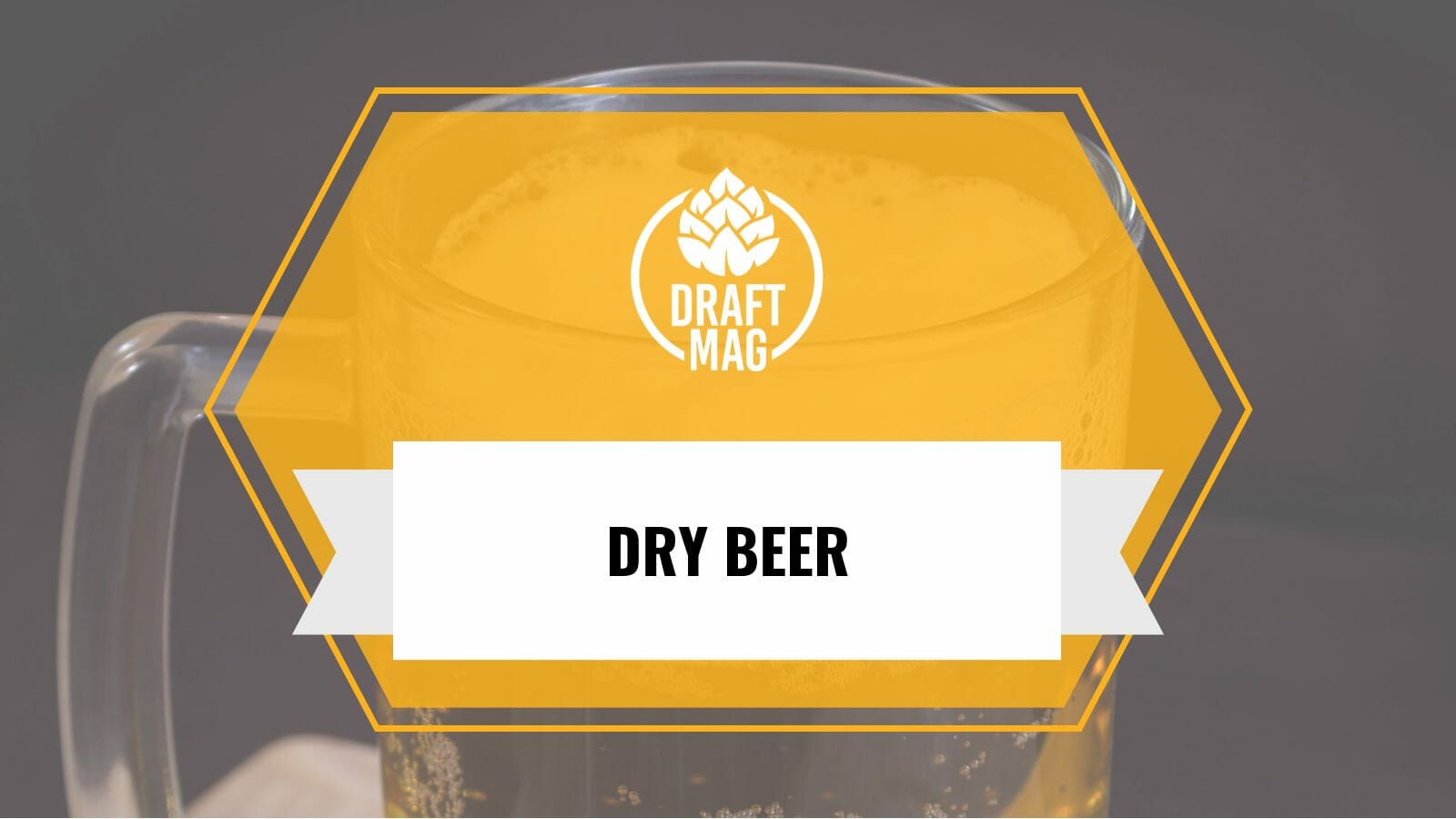 All alcohol lovers have tried strong dry spirits, but did you know that there are now many dry beers available in the market as well? In this complete guide, we discover everything there is to know about dry beers.

What Does Dry Beer Mean?

Dry beers are beers with little or no residual sugars — a new concept in the beer industry. Therefore, it makes sense that the word dry in this context is the opposite of sweet and does not refer to the dryness or wetness level of the beer.

But because beer’s dryness has such a big impact on its flavor, it is crucial to understand what a dry beer represents. The sweetness and bitterness levels fluctuate as the beer’s sugar content is adjusted, altering the overall flavor character. Even if they are bitter, most beers have some sweetness remaining from the grain malts used to brew beer.

Dry beers have a very clean finish despite having high levels of bitterness and low amounts of sugar since they never leave an aftertaste on the tongue. Most dry beers are crisp and refreshing and tend to have high carbonation levels to sustain these exclusive characteristics.

The French were the first to use the term “dry alcohol.” This was mainly done to distinguish and describe fine wine with little to no added sugar content. To indicate which wines or champagnes contained less sugar, they were labeled as dry to indicate their premium quality.

Before that, most alcohols were on the sweeter side, but wine collectors and aficionados disliked this added sweetness, so they sought an exclusive method to identify dry spirits. Later, this categorizing term started to be used for all alcohols like whisky, gins, and vodkas.

It is rumored that many alcohol producers add extra sugar to alcohol to boost sales. Dryness in this context merely denotes a lack of sugar, which can apply to alcoholic and non-alcoholic beverages. 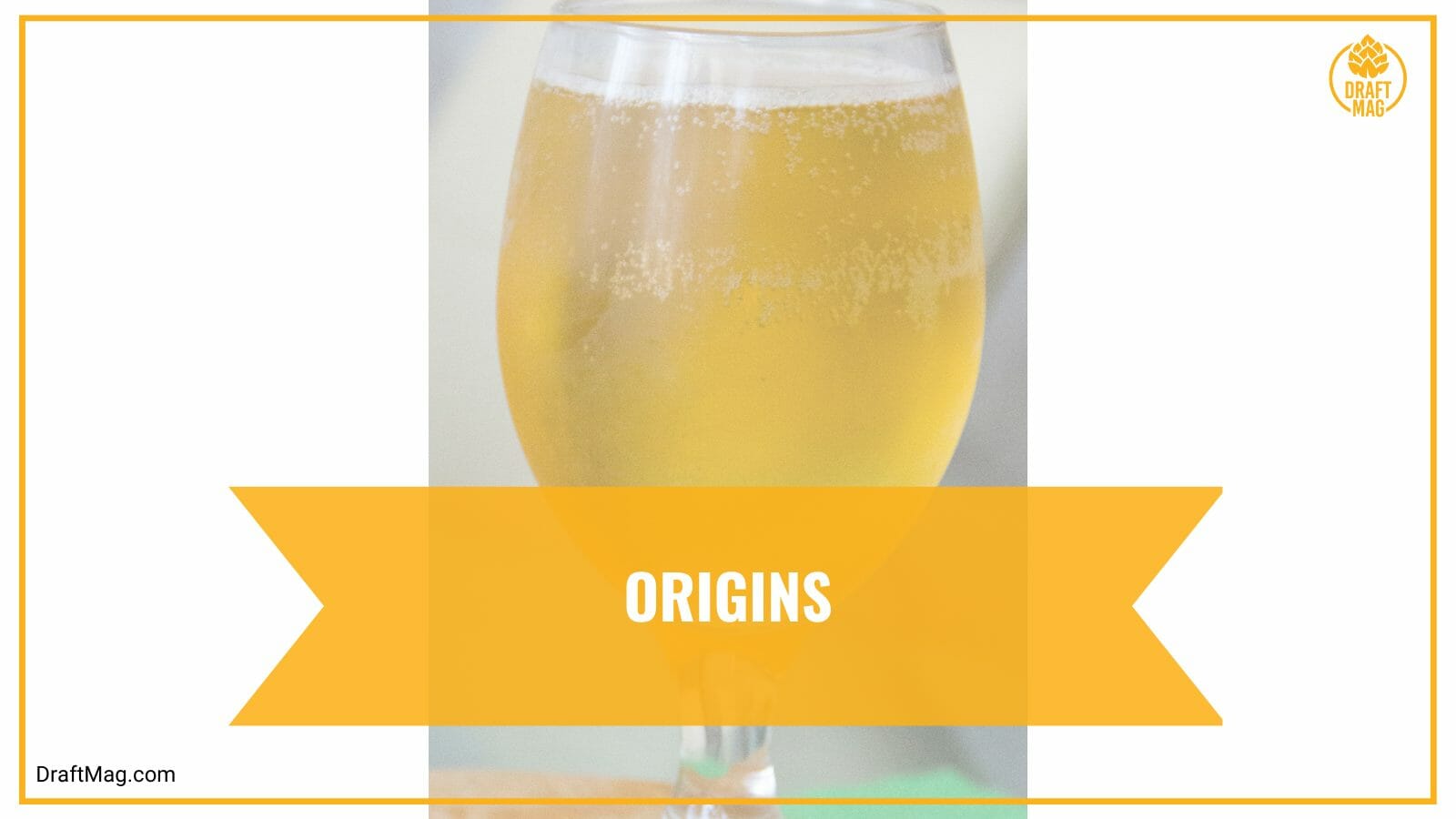 Late in the 1980s, even beer jumped on the trend of being divided into dry and non-dry varieties. According to historical records, Japan is where the Asahi Super Dry, the first certified dry beer, was created. This new beer category has added a whole new dimension to the beer industry.

This beer became an instant hit in the market, eventually accounting for 40 percent of the Japanese beer market. It quickly became a sensation and was shipped internationally due to its high alcohol content and distinctive dry flavor.

It became accessible across all of Europe and America. However, these places soon realized the new wave of dry beer and started producing their own brands of dry and super dry varieties.

– Are All Dry Beers Dry-hopped?

No, not all dry beers are essentially dry-hopped. Dry beers are not subject to any set rules and can be hopped any way the brewers like. Although many dry beers use the dry hopping procedure to add an extra layer of flavor or aroma, it is not a compulsion.

The process of using hops after fermentation to enhance their aroma is known as “dry hopping” or “ice hopping,” and there is a strong and prevalent misconception among many beer lovers that all dry beers are essentially dry-hopped. This is not necessarily true.

No, dry beers are not necessarily high on ABV just because they are low on sweetness. Dry beers can range in alcohol content (ABV) from under 5 percent to over 10 percent. This totally depends on the brewers and the alcohol’s flavor.

The Asahi Dry beer does not have a very high alcohol content — only 5 percent. This clearly indicates that dry beers are not necessarily high-alcoholic beers. Corona Extra, Hahn Super Dry, and other typical lager beers like Bud Light all have an alcohol content between 4.5 and 4.6 percent. So, dry beers have the same average alcohol content as other regular beers.

This can come as a surprise to many beer advocates, given that the proportion of sugar to yeast in any beer directly affects its alcohol content. The higher the ABV, the more the sugar and yeast are broken down and destroyed during fermentation.

In order to appeal to a wider audience, most well-known companies strive to manufacture dry beers with an ABV between 4 and 8 percent. This makes the beer much easier to drink, and the number of consumers tends to increase.

Beers that are super and extra dry differ somewhat from regular dry beers. They are produced through brewing and fermentation in such a way that there is no remaining sugar content. However, these beers have a very strong flavor and typically have a higher amount of bitterness.

What Are the Best Dry Beers?

The best dry beers in the market are Asahi Super Dry, Sapporo Dry beer, Torpedo Extra IPA from Sierra Nevada Brewing, and Liberty Ale from Anchor Brewing. These beers can easily be found in your local liquor store if you want to try them out today.

Since they were first introduced, there have been numerous advancements and inventions for dry and super-dry beers. Here are a few international brands of dry beer that you must drink to form an opinion about this brew style. 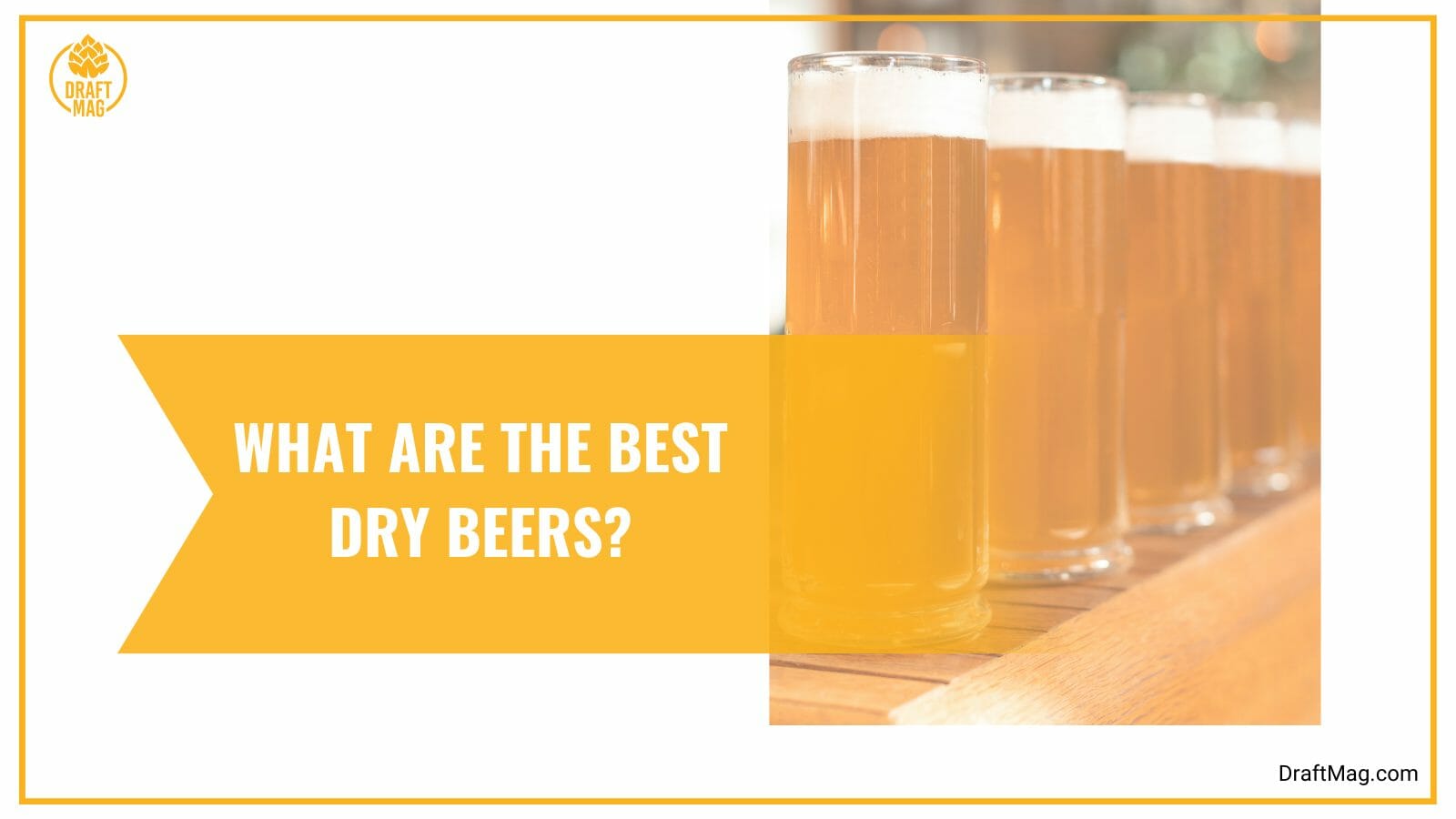 Dry beers represent a very extreme taste since most of them tend to be very bitter due to the lack of sugar, so the reception is mixed among beer lovers. Try out a few of the beers on this list before deciding whether or not these exceptionally bitter and low-sugar beers are suitable for your taste.

Japan was the first country to invent dry beer, and they have continued to be the forerunners in developing multiple new varieties of this beer. Here are some options to consider.

When Japan came up with its own dry beer varieties, the USA was not far behind. Many American brewers took inspiration and created their own craft beer styles of dry beer. Here are some popular dry beers you must try. 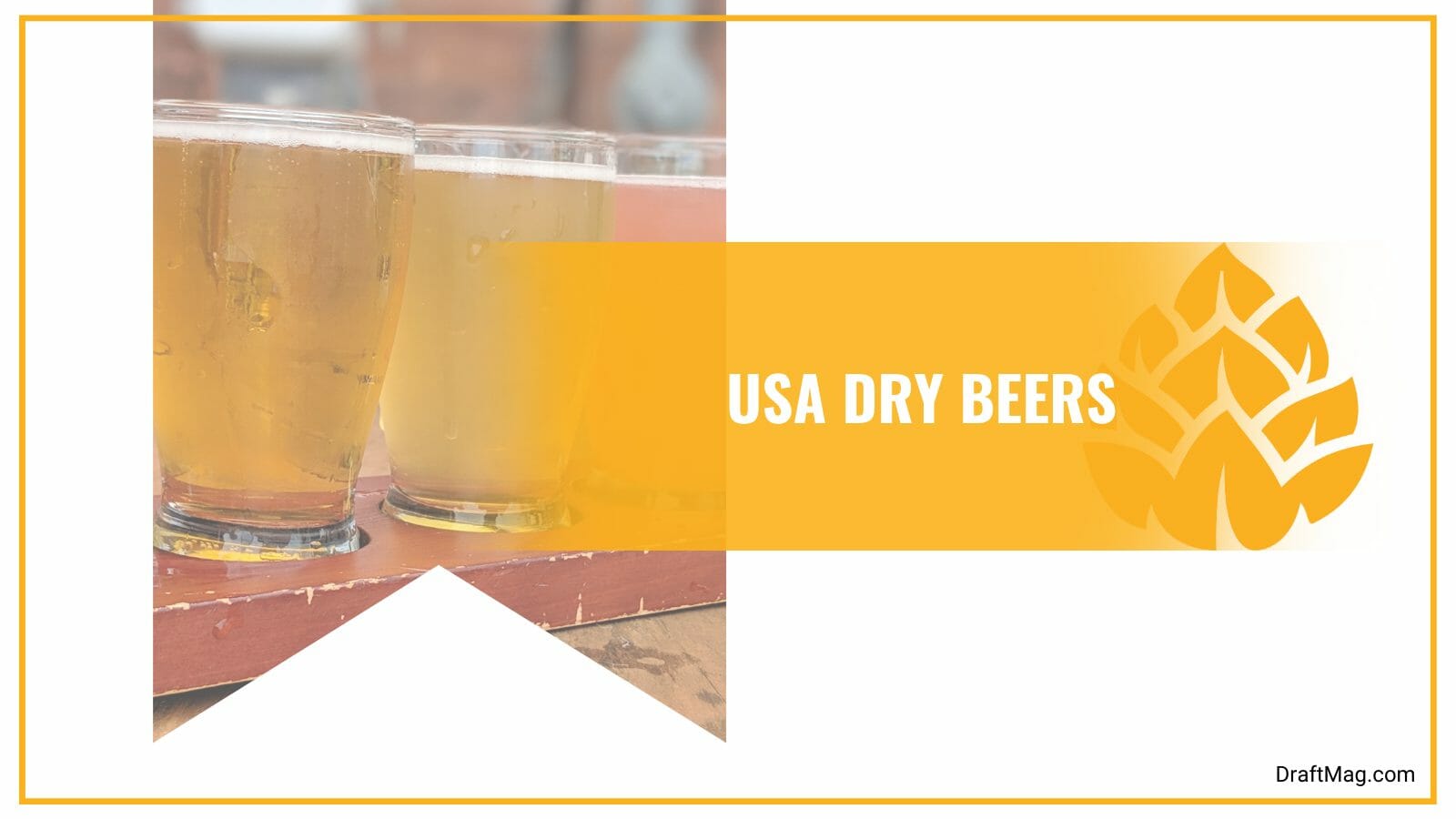 Yes, dry beers can be said to be more healthy than other types of beers. Many dry beer brands advertise their dry beer as being low in calories and carbs to appeal to the health-conscious market or become popular as diet-friendly.

This is actually true; since the amount of sugar is relatively low, the carb and calorie levels also go down considerably. So dry beers are an excellent choice if you’re a beer lover who wants to count your calories even while you consume your favorite beer.

The average amount of nutritional value in a pint of regular beer is 0.31 ounces (9 grams) of carbohydrates (335 milliliters, approx). This amount drops significantly for dry beers, with an average of 0.07 ounces (2 grams) for every 12 ounces, or around one pint (355 milliliters) of beer.

Any standard beer typically includes 115 calories or more, compared to only 85 to 87 calories for any regular dry or super dry beer. These details can significantly impact your daily calorie count for health-related reasons while allowing you to enjoy your beer.

As we have seen from the guide above, dry beers are a fairly new creation that was borne from the creativity and innovation of beer brewers. Here is a quick recap for you before you try a bottle or two of this sugarless beer.

If you are an experimenter with beers and want to get the full taste of dry beer, we recommend you try out all the beers mentioned above to see if they suit your taste palate. So what are you waiting for; grab a bottle of dry beer from the closest liquor store and give it a try today!