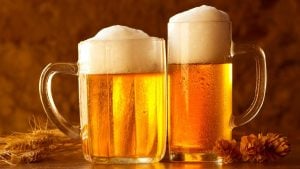 The gose vs sour debate is a whole other spectrum of discussions and opinions, but if we have to put it in simple words it would be: all goses are sours but not all sours are goses. While sour beers use wild yeast like lactobacillus (a type of sour beer bacteria), which produces a tart-like flavor, gose beers contain salt and coriander which gives the gose its salinity.

Let’s break through all this jargon with this complete guide.

Here is a comparison table for a quick look at these two beers.

What Is the Difference Between Gose vs Sour?

The main difference between gose and sour beers is that sour beers use wild yeast strains while gose beers use salt and coriander in their flavors. Gose beers are produced with the “kettle sour” method instead of longer mixed culture fermentations.

For gose beers, yeast or bacteria (lactobacillus) is introduced to the wort, then sterilized by boiling before fermentation. This is a widely preferred technique as it is easy to brew, can be controlled, and lowers the risk of contaminating the brewery.

The sour notes in this beer are also very basic and simple, less complicated as well as fruity. Traditional gose is spontaneously fermented and also less expensive, taking only a few days to age.

On the other hand, traditional sours are made using a variety of processes. These beers can be cooled or even open-fermented, thereby picking bacteria from the atmosphere, lending it its unique sour-tasting notes.

Another way to produce sour beers is by adding fruit and re-fermenting the beer with wild yeast from the fruits. This is a fairly uncontrollable method, and the beer is stored or aged in wooden barrels (or wine barrels) due to its long aging process to get its distinct sour, musty flavors.

Brewers manipulate the process of making sour beers either by varying the ingredients in the base beer, altering fermentation temperatures, deciding to add brett in primary or secondary fermentation, varying how the bacteria is introduced (manually or naturally), mixing batches or Barrel-aging. It truly is a game of permutation and combination.

What Is a Sour Beer?

Sour beer or sour ale is a beer that is acidic on purpose and sour to taste. While other varieties of beer use controlled strains of yeast in the fermentation process, the sour flavor is a result of a unique brewing process that uses wild yeast and bacteria. 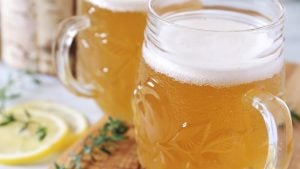 The first sour beers were invented in Belgium. Moving back in time to somewhere around 4000 BC, almost all beers were sour beers. The exact quantities of ingredients were still a question mark, and the beer-making process was basically a try-and-test mode.

The fermentation process produced a certain type of bacteria called lactobacillus (sour milk bacteria), which was the prime cause for the beer’s sour flavor.

With technological advancement, sour beers went downhill and a newer, fresher form of beer took its place. Sour beers are usually aged in wooden vessels instead of metal ones as it allows the bacteria to grow on them naturally.

As mentioned above, sour beers are fermented, either fully or partly, using a wild yeast strain called Brettanomyces (brett), which basically grows on fruit skins. Sour beer brewers embrace this while traditional winemakers go to extreme extents to avoid this wild bacteria.

Brett, on the other hand, helps break sugar into alcohol and carbon dioxide by imparting a wide range of esters and phenols, producing earthy, fruity or musty flavors depending on the strain used. These rustic flavors go a long way in giving sour beers their character and aromas. The brewers refer to this as ‘funk.’

Sour basically stands for the acidity level of a beer, which are acids that wild bacteria such as Pediococcus and Lactobacillus create. Once introduced into the beer, these bacteria feed on the leftovers and, over time, create lactic acid and even acetic acid (vinegar) in some cases.

Most of these beers are not made in a sterile environment. The worts are cooled outdoors where these bacteria and wild strains are introduced on purpose.

Sour beers have a vinegar-esque aroma and a remarkable tartness that overpower food flavors in general. Pairing food with sour beer needs to be done well to fully enjoy the beer.

With that being said, some of the possible food pairings with sour beers are the following: tangy cheeses like goat cheese, mussels, other seafood topped with lemon, omelets or other dishes like creamy pasta, cured pork or salty meats. Duck saltimbocca is also a brilliant option of food pairing with sour beers to bring out the tartness of the drink.

Types of Sours: Variety, Flavors and Some Beer Options

What Is a Gose Beer?

Gose beer is a bright, light and lively beer with a brisk and tart flavor profile.

It is a german sour beer that is fruity with interesting flavors, encompassing ingredients like barley, wheat, coriander and salt. Gose beer has a strain of lactobacillus and top-fermenting ale yeast, which gives it a unique fruity yet sour taste. 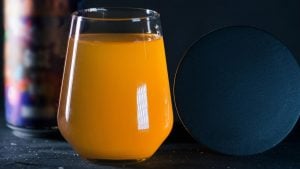 Gose beer originated in a small mining town in Germany hundreds of years ago. Eventually, due to WWII and the Cold War, gose beer started disappearing. Most of the gose beers in the market have some flavor of fruits to create a balance with the sourness. Aside from that, this beer is quite refreshing, which is what makes it such a popular summer drink.

The most basic characteristics of gose beer or gose ale are medium to light sourness, fruitiness, lemony flavors with a kick of fresh, bread-like aroma. It is not usually hoppy, and the salt adds a clean sea breeze to it. A gose ale should typically be crisp and refreshing as a summer cooler.

In Germany, gose beer like Berliner Weisse is paired on the side with a dash of raspberry or woodruff syrup. Some of the gose beers can also be paired with goat cheese and seafood such as shrimp or scallop ceviche with mango salsa on the side.

This salty summer beer generally goes with everything under the sun. It can also be paired well with grilled food and spicy barbeques. It is a perfect beer for a beach day, barbecue or a normal sunny day on your couch.

Gose Beers To Try This Summer

If you are a homebrewer who is looking to dive into the world of sour beers, it is best to experiment with small batches to understand the combinations that lead to your desired product. It is also best to accept that with sour beers, while all the above variables can be controlled, there is always room for unpredictability thanks to the element of nature. 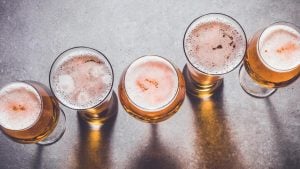 If you get into the depths of gose vs sour beer types, the science beneath it is slightly complicated. If you are a homebrewer, however, you could come up with your own unique and flavorful German sour beer with enough practice and a better understanding of the different yeast strains.

While sour ale requires a dose of wild yeast, gose beer uses lactobacillus with a pinch of salt and coriander for its unique fruity flavors. Every brewer has his own style of brewing. It depends on each one’s choice of fruit pairings for added flavors.