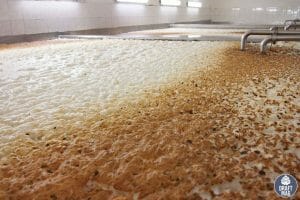 If you find yourself asking, “what is krausen?” you’re probably new to homebrewing. Every beermaker knows how annoying it is to have your kitchen a complete mess because of this, especially if it leads to a blowout.

But krausen isn’t all bad and can provide some benefits for your beer. Let’s take a closer look at this homebrewing concept and how you can control it.

Krausen is the foamy head of yeast formed at the peak of fermentation. The foamy head indicates that your beer is fermenting, and once it falls, you know that the process is complete and you can now keg the beer.

Aside from the definition given above, krausen can also describe the process of adding measured amounts of beer that have reached the highest peak of fermentation to one that is already fully fermented. This is a process for carbonating beer naturally.

Homebrewers usually use krausen as a noun, as the rocky head of yeast. The word is derived from the German word for “curly.”

Krausen is pronounced “krow-zen.” It’s easy to pronounce, although beer enthusiasts usually make a mistake since the word is German.

– What Is Krausen Made of?

Krausen is made up of live and dead yeast cells since you pitch yeast to ferment your beer. This is mixed with proteins and the compounds in the beer. Krausen usually builds up pretty quickly, especially when reaching the peak of fermentation. You will also notice that it sticks to the sides and roof of your fermenter.

If your yeast is not very active, you will notice that there is only a thin layer of krausen in the fermenter. On the other hand, the krausen can be too much and cause a blowout because of excess yeast.

– Pros and Cons of Krausen

Homebrewers have mixed feelings about Krausen, and while it has its benefits to your beermaking process, there are a couple of things that might upset you.

– Can You Rack Beer with Krausen High?

Yes, you can rack beer with high krausen, but you might not want to. If there is still krausen, it’s a sign that the beer has not finished the fermentation process. You can finish fermenting in about five days, but unless you need the beer urgently, it’s recommended to leave it for 14 days to ferment fully.

This way, the yeast will ferment the beer completely and condition it. You’ll end up with a clean beer with better flavor and a few off-tasting notes. Also, if you are racking with krausen present, you should use a fermenter with a spigot at the bottom.

– Does Krausen Go Away?

Yes, krausen will eventually go away; it’s just a matter of when. In some cases, the krausen will crash within a few days, and if your final gravity is good, you can bottle your beer. But on the other hand, krausen can stay on the beer for many weeks.

If your case is the latter, you should check the gravity with a hydrometer. Depending on the recipe, the krausen can remain even after achieving fermentation.

Also, the krausen might have died down, but it still appears like it is high. The krausen is caked on your fermenter, especially with a glass carboy. It will be stuck there and won’t drop until all the yeast is done.

– How Much Krausen Is Normal?

This depends on the type of beer you’re making. Different factors determine how much krausen you have in beer, which includes:

– Should I Remove Krausen?

This is a matter of your personal brewing preferences — some people don’t like it and remove it, especially since it can fall back into the beer and add a bitter taste, but others leave it since it’s simply yeast working.

If you decide to remove krausen, keep in mind that it gets rid of your yeast. This can cause your beer not to ferment fully. Also, opening your beer up to remove the krausen introduces the brew to oxygen, exposing it to off-flavors.

– Lots of Krausen but No Airlock Activity 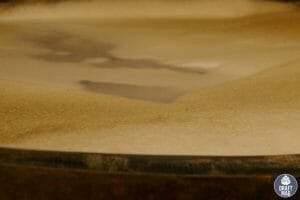 If you’re seeing krausen, your beer is fermenting anyway, and if you notice that there is no activity in your airlock, there is a leak somewhere in the fermenter or carboy. It would be best to consider replacing the airlock or closing the lid.

If none of this work, you might need a new fermenter.

– What Makes a Beer More Likely to Overflow?

Beer is more likely to overflow when it is a high gravity brew. High gravity beers produce a higher alcohol content, so you need more active yeast to make as much alcohol as possible. Since krausen happens because of the yeast interacting with sugars, high-ABV beers overflow.

An out-of-season beer is also more likely to cause a blowout than one that’s not. Some beers are ideal for fermentation in the winter, while others are better for the summer. For instance, if you’re fermenting a lager in the summer, you’ll need to do so vigorously, which can lead to a blowout.

Ales are better suited for summer while lagers are best for winter. If you ferment an ale during winter, you’ll also need to do so with more yeast. It’s essential to check the temperature needs of the beer before brewing it.

Keep in mind that although all beers are supposed to have a krausen, not all of them overflow and cause a mess while you’re homebrewing.

When making beer, you will pitch your yeast in the wort. At the right temperature, you should see some bubbles within a day. After this, the bubbles will be replaced with krausen, which shows that your beer is now being fermented.

But if you notice that the krausen has sunk into the beer, this doesn’t necessarily mean that the fermentation has stopped working. Before racking your beer, you should always take a gravity reading anyway. Here are some tips to keep in mind.

– Be Patient With Your Krausen

It would be best to be patient with your krausen because this shows that you have a live yeast converting the sugars into alcohol. The krausen indicates that the yeast is most active, but the entire fermentation process can take one week.

Even if you’re seeing krausen, you should be patient and wait for the fermentation time to be complete. Don’t jump to conclusions and quickly rack the beer just because you can see the development of krausen.

– The Burp Before the Krausen

If you watch the fermentation process, you will notice something fascinating. The bubbles caused by pitching yeast will burst, which means that the gasses are being released. After this, the krausen will begin to develop, so don’t panic if you notice this happening.

How long the bubble takes to burst depends on the beer recipe and the yeast you’re using. It can happen 12 hours after you pitched the yeast, while the krausen will develop 24 hours later. This is the minimum time, and the process can take longer. As long as you put the right temperature and conditions for fermentation, be patient with the krausen.

– Waiting for the Krausen To Crash

Whenever the krausen has crashed, it’s a sign that the fermentation is most likely complete. But it would be best if you were sure before bottling your beer, or you’ll end up with undone beer. You can check the gravity reading with a hydrometer, an essential part of your beermaking kit.

– Watch for the Blowout

Sometimes, krausen can lead to a blowout, which is when the beer is too active and causes too much foam in the fermentation tank. It can block the airlock and lead to high pressure inside the tank.

Once this happens, your entire fermentation tank can blow out entirely because of a leak or damage to the device. It would be best if you are brewing in a place where it is easy to clean, or you’ll spend a longer time cleaning than drinking your beer.

If there’s a terrible blowout where the fermentation tank gives out, you’ll have to clean up and start the brewing process again. This is the main reason why brewers don’t like krausen.

How To Avoid Krausen Blowouts

Although blowouts can happen, you don’t have to deal with them every time you make beer. There are different ways to reduce the risk, but the three easy ways are temperature control, purchasing a blowoff tube, and using the right vessel size.

Fermentation is all in the wort’s temperature, so this is one recommended way to prevent a blowout of krausen. When you ferment the standard five-gallon wort, the temperature increases by 10 and 15 degrees.

It’s important to note that krausen builds up faster when the wort becomes warmer. So if you don’t reduce the temperature at this point, you’ll end up with a blowout. You can also look for different ways to cool off the wort by placing the vessel in a bucket of water with ice or brewing in a place with a thermostat and air conditioning.

– Use a Blowoff Tube To Prevent Fermentation Overflow

If you’re using a traditional airlock to ferment your beer, you’re at a much higher risk than using a blowoff tube instead. When a krausen builds up quickly, it can block the airlock and stop air from coming out. This will enhance the pressure in the carboy until the airlock pops off.

The blowoff tube is attached to the top of the carboy and leads to another vessel, which passes the extra krausen through. You can get rid of the krausen that you’re going to throw away anyway and reduce the pressure on your fermenter.

Always avoid overfilling your vessel, even if you have so much wort and don’t want to let the extra go. If not, you’ll end up with no beer at all. The standard carboy is between 6 and 6.5 gallons, and you should fill it up to 5 gallons.

This will leave headspace for the krausen to develop. If you notice that you’re making more beer lately, you should buy a larger vessel instead of trying to manage the one that you’re using. By leaving about 1.5 gallons of space in the vessel, you can prevent a blowout.

If you’ve been wary about krausen in your beermaking process, you don’t need to be. It’s simply a normal process and won’t cause a mess if you monitor it correctly. Here is the rundown of what krausen is.

The next time you’re making beer, look out for the krausen and prevent a mess in your kitchen!