Pepper in beer might sound a little bizarre and spicy, but it is actually a common practice among some enthusiasts. Adding peppers to different varieties of beer has become quite the rage in the beer industry. 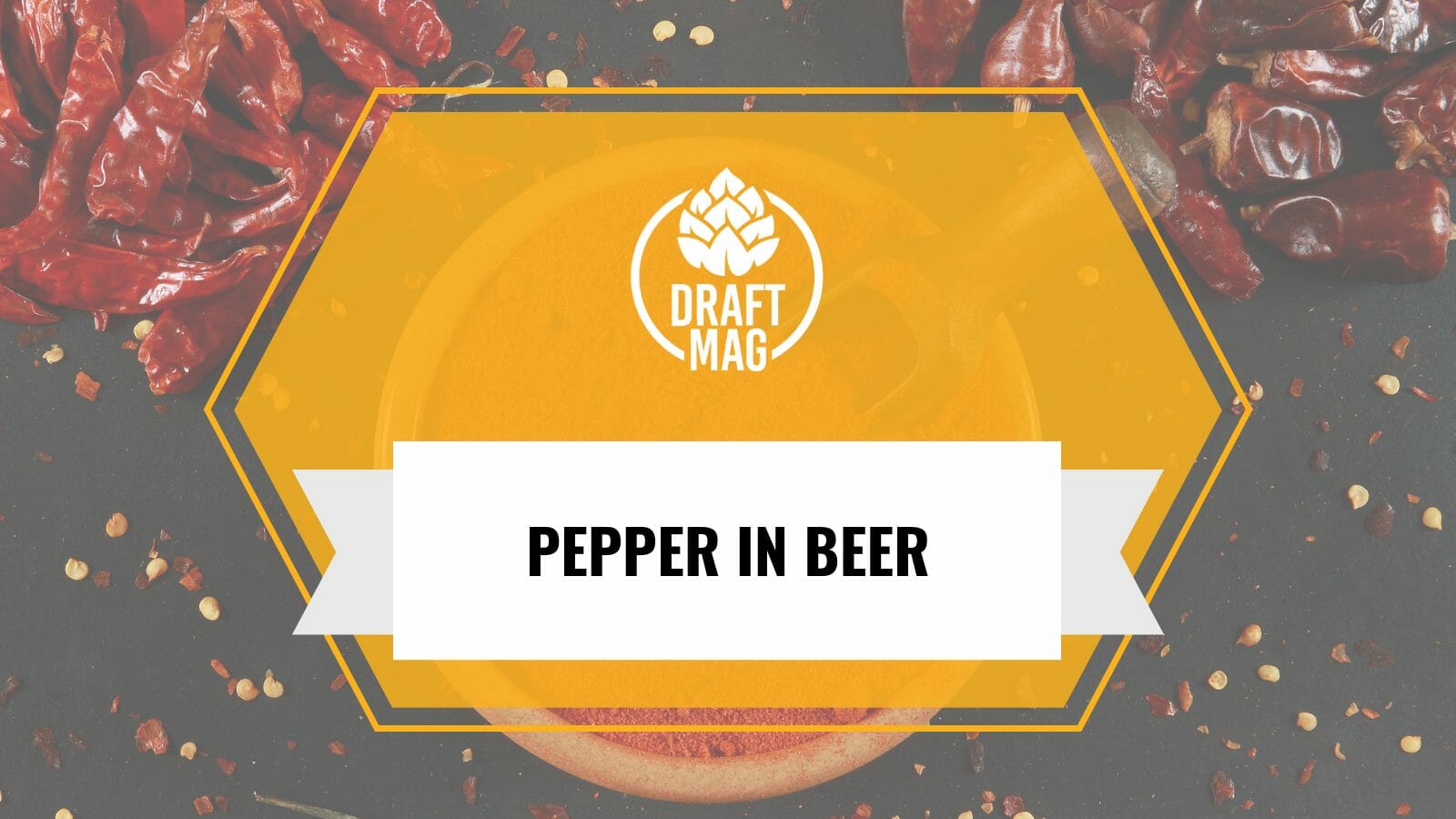 Since most beers are cold and refreshing, adding pepper to them actually makes a great balance of cool and spicy flavors and aromas. If you want to know how and why many brewers are now using spicy peppers in beer, read on to find out.

Why Do People Put Pepper in Their Beers?

Pepper brings about a spicy complexity to beers, and another reason why hot and spicy peppers work well with beer is that the peppers complement the phenols produced by yeast and form a great balance of flavors.

So be it peppercorns or chilies, present-day craft brewers have started experimenting with a lot of spicy ingredients in their beers. They also help enhance the taste of the phenols and help in adding more layers of flavor to the beer.

This is probably why saisons are commonly associated with spicy pepper-infused beers. Saison beers are naturally spicy; hence, adding a layer of pepper enhances the taste even further.

The new age of beer experiments has allowed a lot of people to add many different kinds of ingredients to beers and create their own new flavors and tastes. Among them, adding pepper has become quite a rage in this industry because it seems to have brought about an extra punch to the regular coldness, bitterness, and sweetness of most beers. 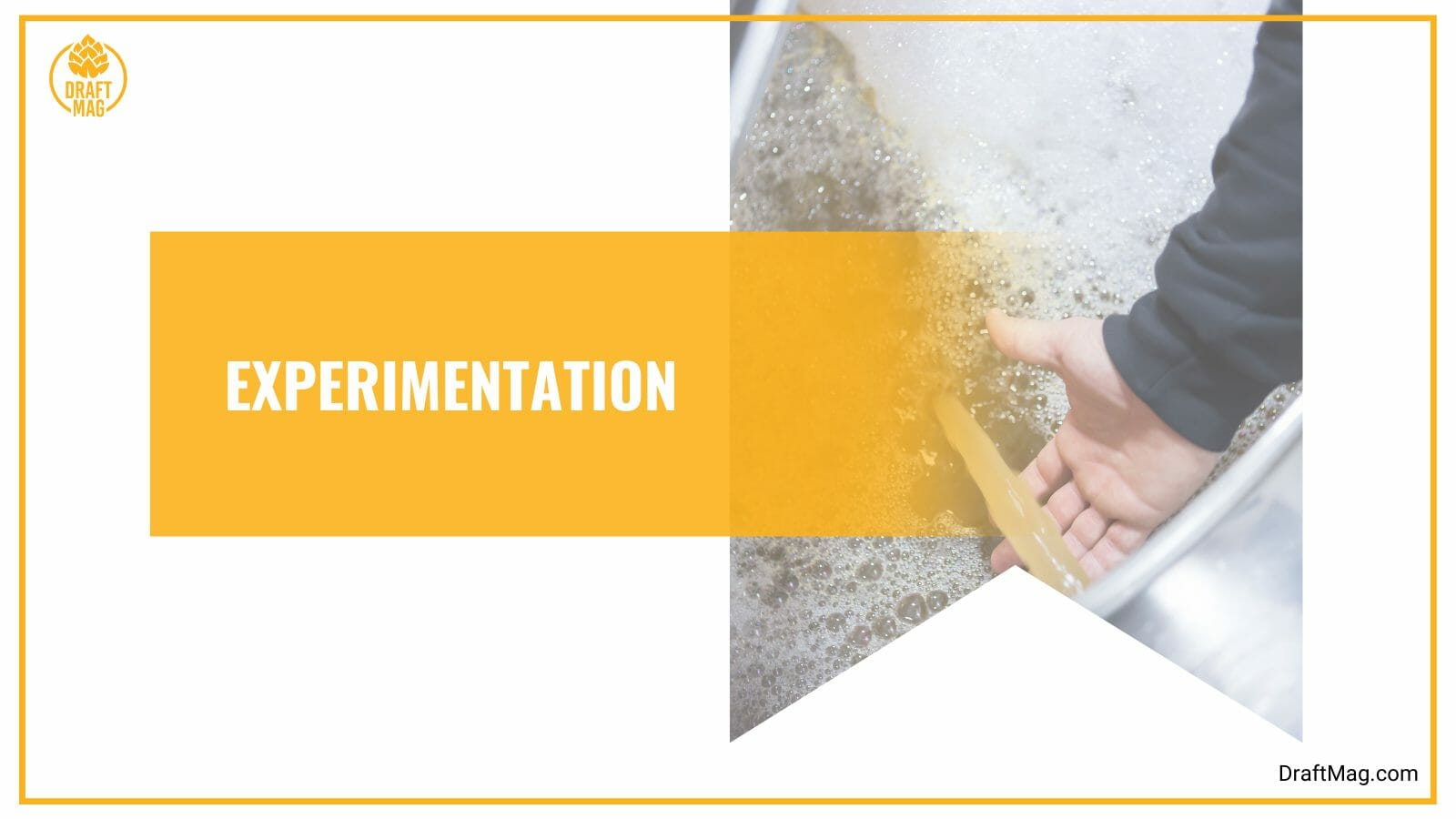 As pepper is a fine culinary addition to many recipes, this ingredient has also set foot in the craft beer world. But at present, there are many different kinds of peppercorns in the market, with different levels of intensity providing enough for experiments with all kinds of beers.

Depending on the level of spiciness the brewer desires, the pepper is either added 10 minutes before the wort boil is over or after the wort is cooled down. When brewers just want the aroma and less of the taste, it is better to let the pepper not boil to cut down on its spiciness. When pepper is cooked, the spiciness increases significantly.

How To Brew Your Own Spicy Pepper-infused Beer

Has all the talk about the tasty and spicy beer got you wondering if you can brew your own batch at home? Yes, you can. Like other beer styles, pepper beer can also be made at home. There are many easy recipes out there, but here we have listed a beginner’s recipe to help you start.

– Prepare the Ingredients You Need for the Brew

Here is the list of ingredients you will need as well as the quantity of each. 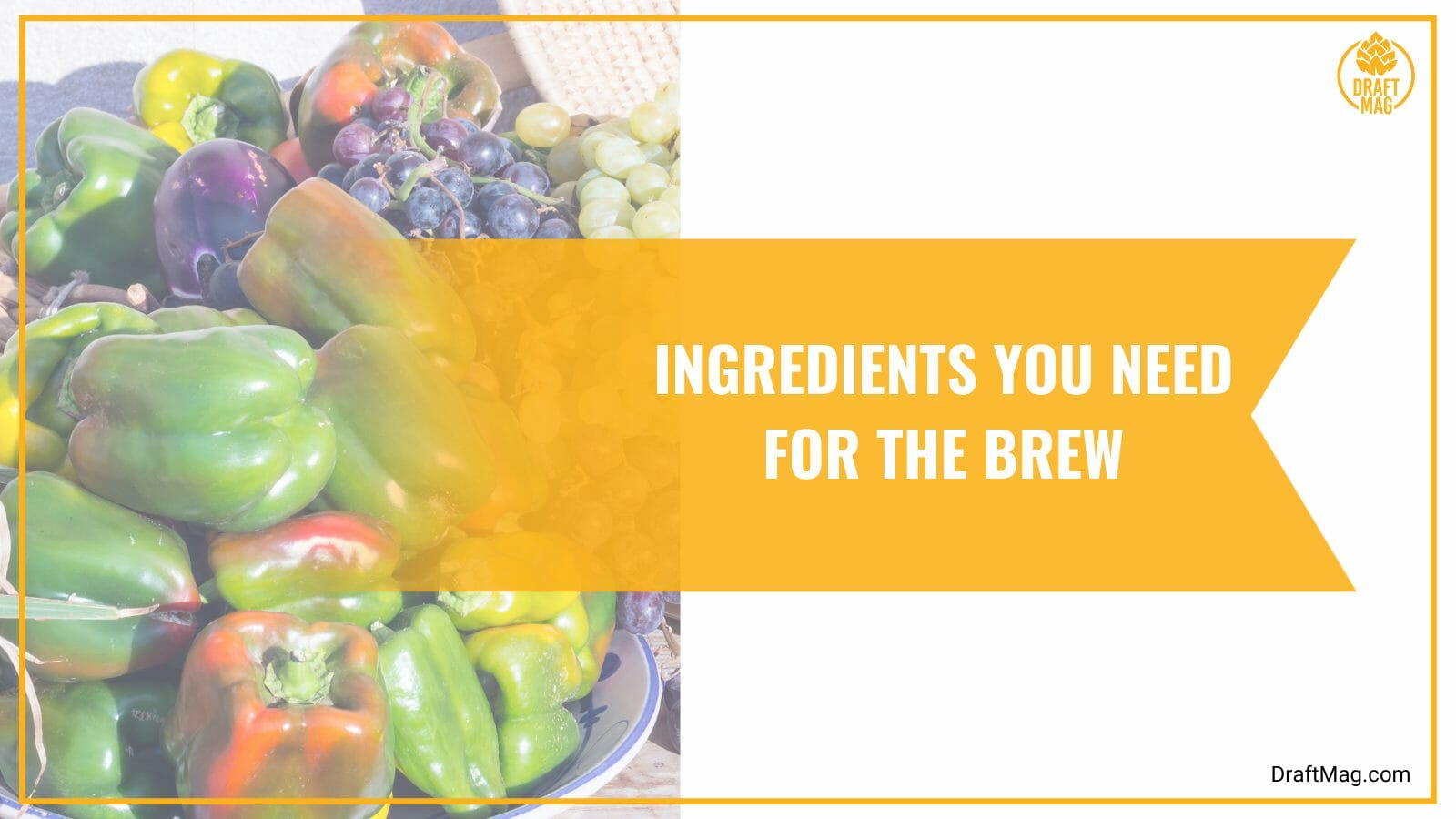 – Proceed With the Brewing Process

We have simplified the steps below for a better understanding.

What Are the Types of Peppers Used in Beers? 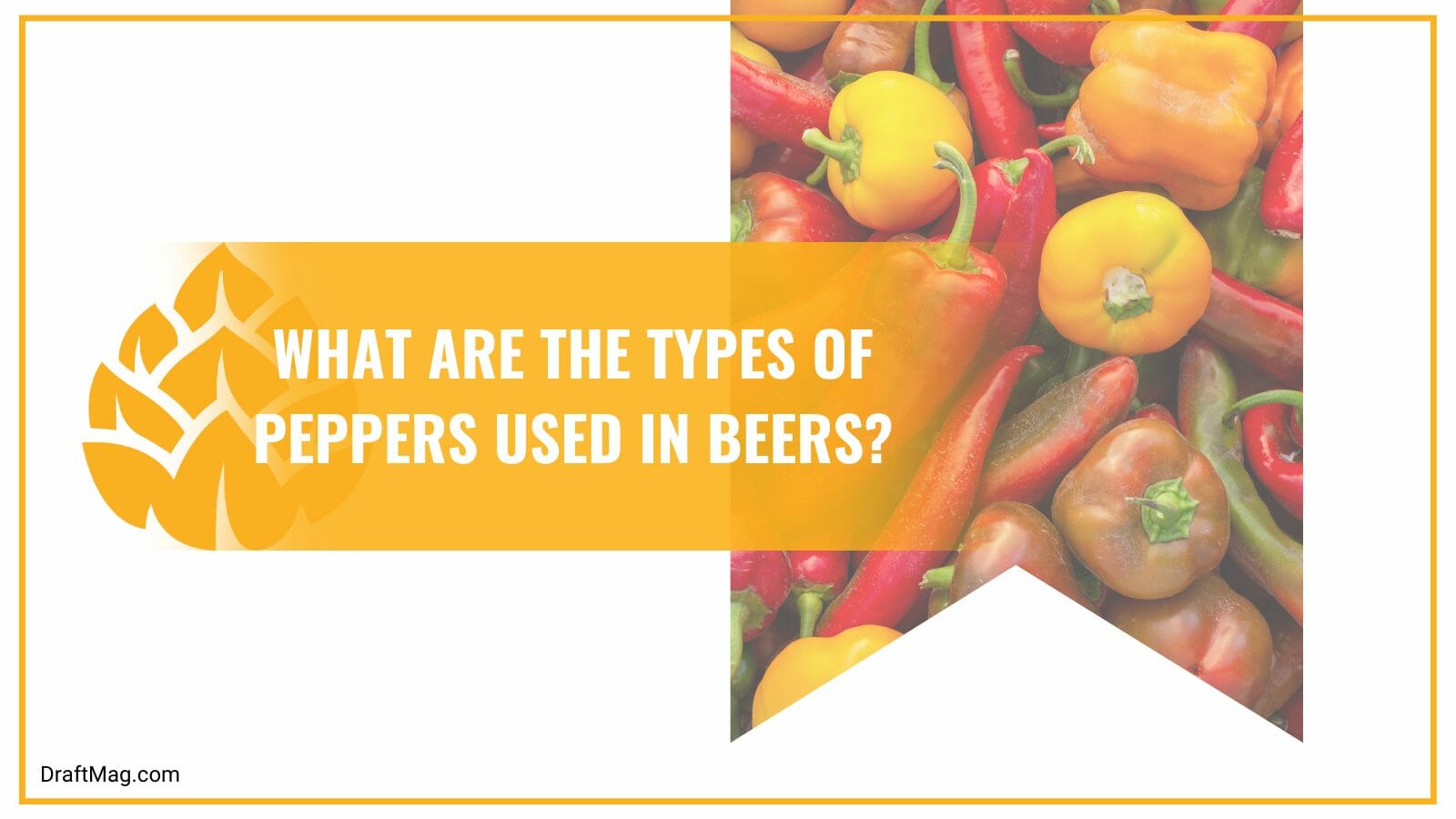 Here are a few options you can use.

The unripe berries extracted from the Piper nigrum vine are called black peppercorns. They are dried and cooked before being added to recipes, be it beer or food. When cooked, the taste and smell of the black peppers are enhanced even further and will bring about new citrus and floral essence to the dish or beverage.

They are also used in combination with other peppercorns like green, red and white. But adding them together can lead to a very spicy drink, mostly found in saisons or triples. Most brewers mostly use black pepper in beer if they want it less spicy.

White peppercorns are the ripe berries of the same Piper nigrum vine that black peppers come from. After these berries are ripe, they are dried and then cooked. After that, the outside black coat is removed and only the white inside portion is used. This becomes the white peppercorn. This peppercorn is more on the herbal side of flavors and the level of spiciness is also quite low. 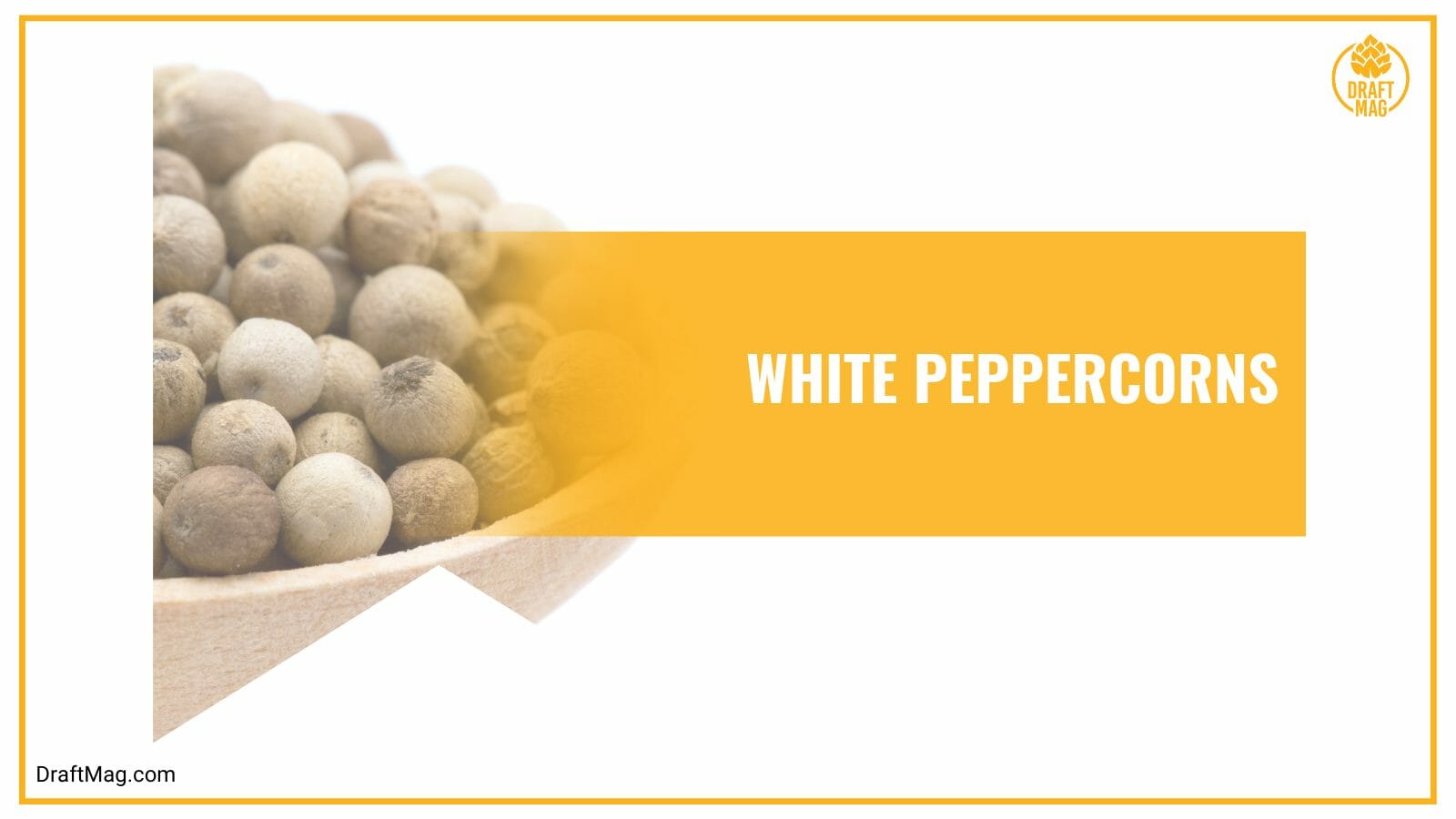 When brewers want a peppery flavor yet want to make it less spicy, white peppercorns are the best addition. This pepper is mainly used to brew strong Belgian ale and barley wines. It works especially well with barley wines because its sweetness is balanced out by the spiciness and forms a very rich flavor.

The green peppercorn is also the unripe and uncooked berry from the Piper nigrum vine. They are a very similar version of the black and white peppercorns. The green peppers’ spice level is even lower than the white one; hence the heat is very restrained.

Since this is a raw green pepper, it has an almost jalapeno and serrano-like flavor. These peppers are low on spice and high on earthen and rustic flavors and aromas. Thus, they work very well with Saison beers.

Since most saisons are already spicy, the green peppercorn becomes a complementary addition with only a mild hint of spice. Even some experimental lager beers use this to enhance their light flavor profile.

The pink peppercorns are very similar in size and taste to black and white peppercorns. However, these peppers do not originate from the same Piper nigrum vine. They actually come from the cashew family of plants, which gives them a beautiful flavor profile. They have an earthen and floral spicy smell and sweet citrus taste. 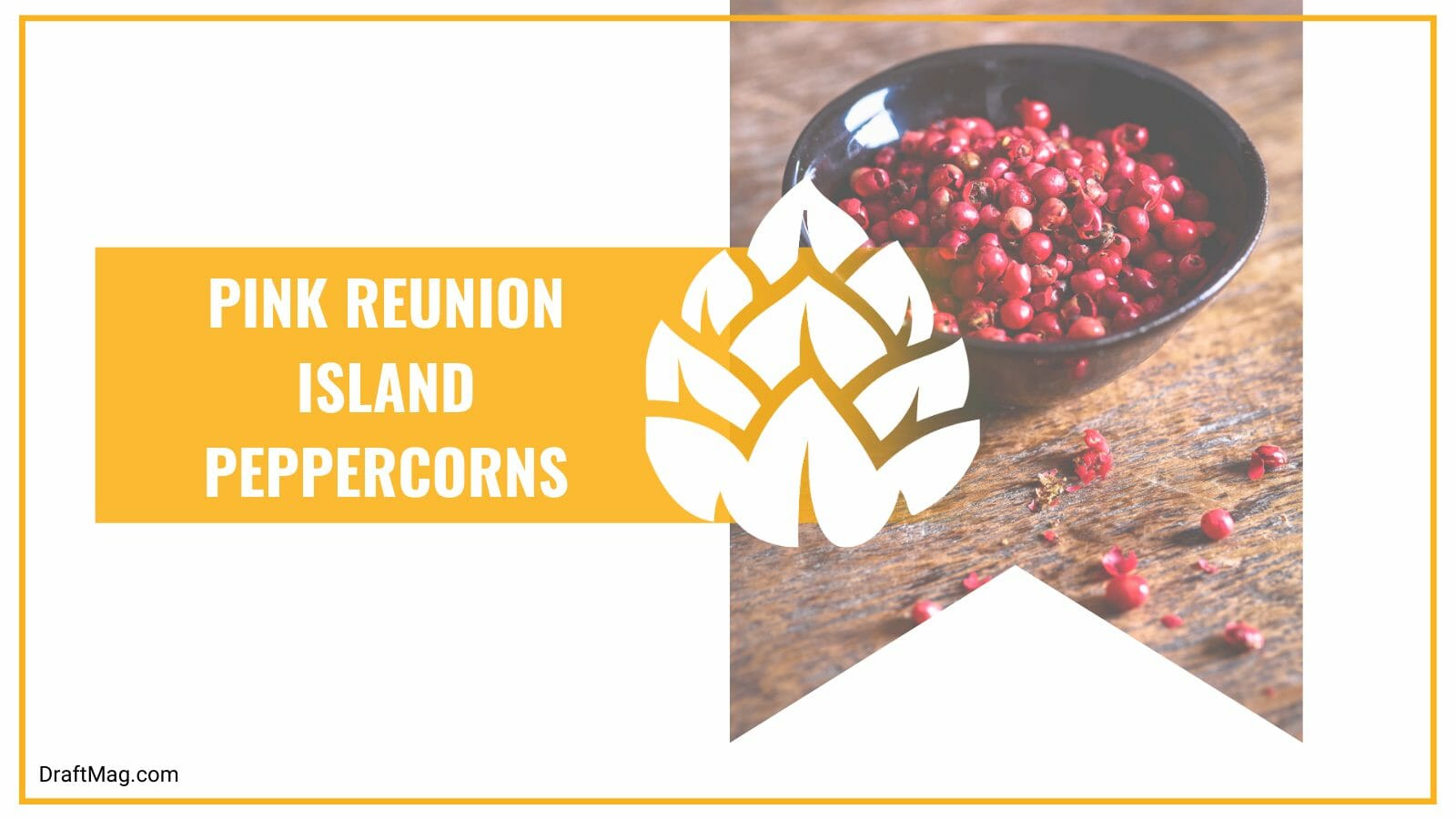 The essence and aroma of this peppercorn are quite unique. They also have a very vibrant pink color, which is very exclusive for a pepper. Since they belong to the cashew family, it is advisable for people allergic to cashew not to consume pink peppercorn beer.

Brewers tend to add this pepper in various kinds of light-bodied beers like pilsners, Belgian ales, saisons, Belgian pale ales, etc. Additionally, many expert brewers and beer advocates have realized that this pepper works very well with Amarillo and Citra hops. The flavors of these hops are enhanced even further by the pink peppers and are mostly used to brew India pale ales and regular pale ales. Even some English Pilsners are brewed with this pepper variety in some breweries.

Jalapeno is one of the most common types of peppers that are very often used in numerous food recipes. They offer a strong heat, and the seeds are removed and added to many craft beers. Some brewers add it during the boil to increase the heat level, while some add it after cooling the wort to get a mild aroma of the jalapenos. Jalapenos work well with witbiers.

Anaheim pepper adds a spicy aroma to a beer without much heat. This pepper is very low on the spice level. Hence, it can be used to flavor any light-bodied beer. 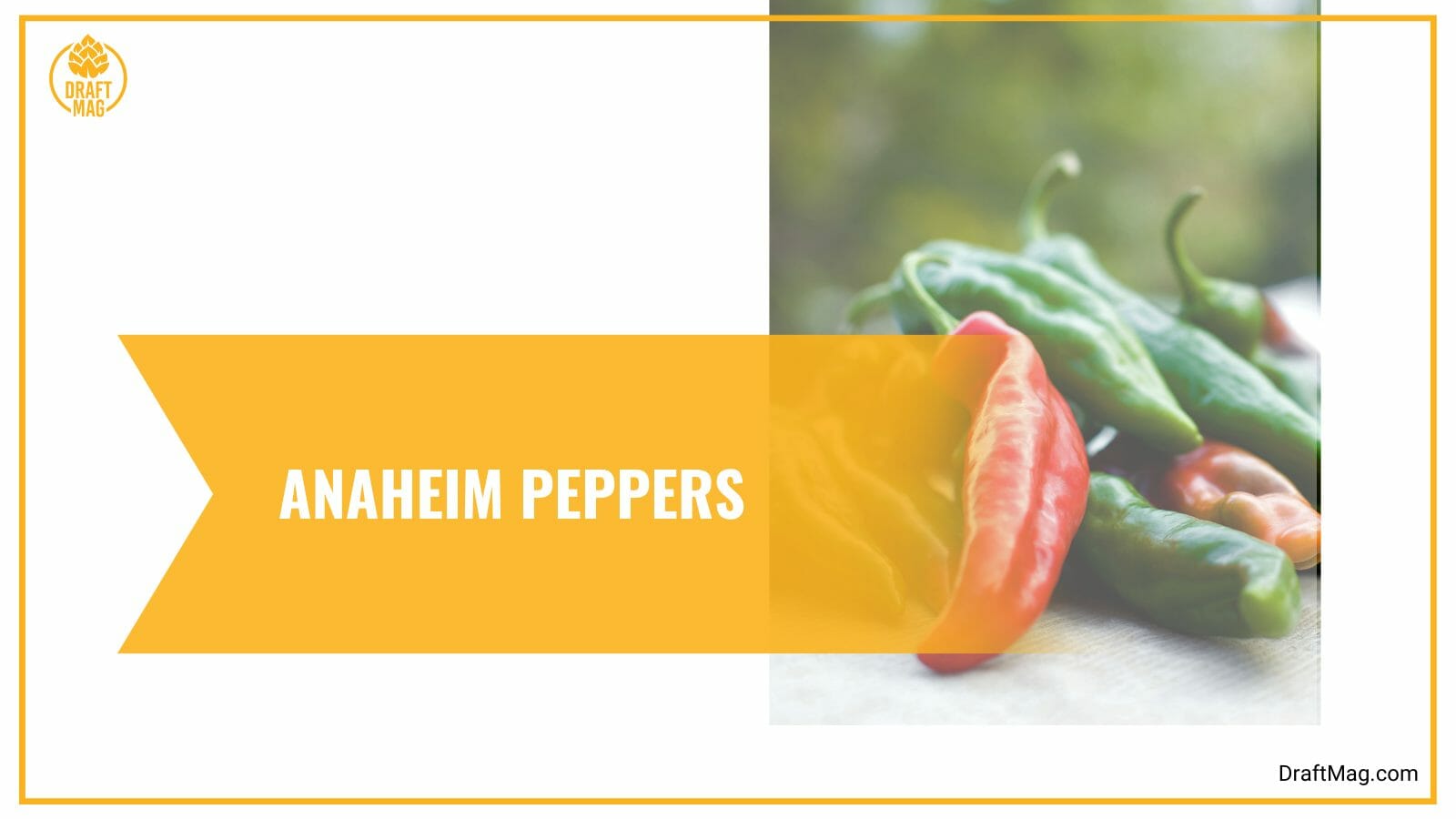 This is the best fit for people who want to smell the spicy effects but do not want to taste the heat.

Are you looking forward to trying one of these spicy and exciting beers after learning all about the depths of its flavors? Here are a few spicy beer options from across America that you must try.

This is a light porter beer with an ABV of 5.9 percent. This beer is dark in color and has notes of coffee, roasted malts, vanilla, and dark cocoa flavors. In addition, they also have a very subtle aroma and flavor from the chipotle peppers they use. The pepper adds a little kick to the dark flavors and balances out the smoky taste.

This is a very classic combination of flavors in the Lips of Faith beer. They combine the chocolate, cinnamon, and pepper flavors for a sweet, bitter, and spicy flavor profile and have become an instant hit in the beer market. 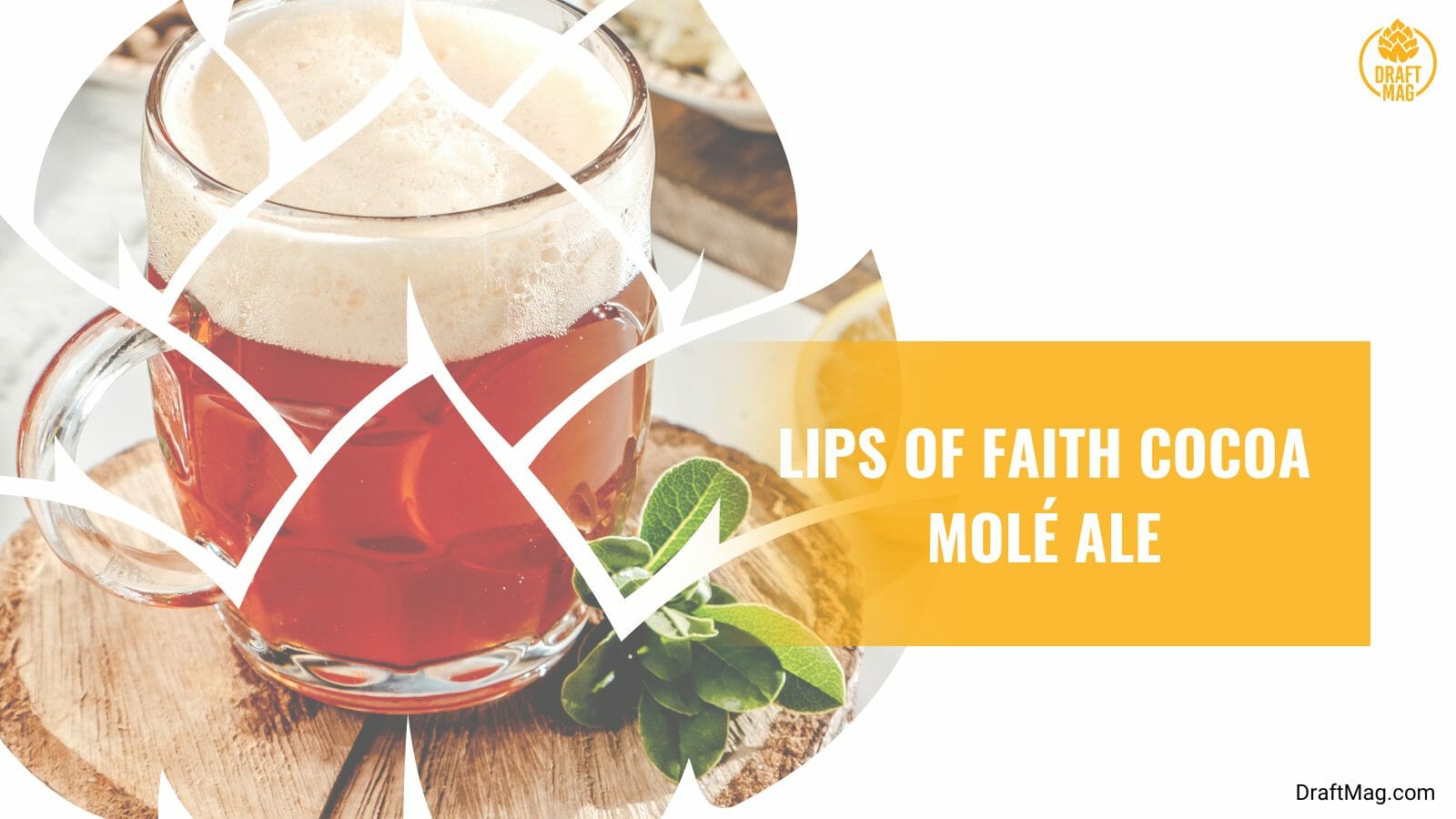 This is also called chili beer because they use both chill and pepper to brew it. It is a strong stout beer, hence the flavors of the dense chocolate are well-balanced with the spiciness and none of the tastes become aggressive.

– Ghost Face Killah Is Made by the Twisted Pine Brewing Co, Boulder, Colorado

This beer is one of the spiciest beers you will ever come across. It uses six different varieties of chili pepper in the brewing process. This beer is only 4.5 percent in alcohol level, which enhances the heat even further.

This beer does not directly use pepper but uses the famous Siracha pepper sauce in the brew. This beer has a very savory taste with an ABV of 5.7 percent. 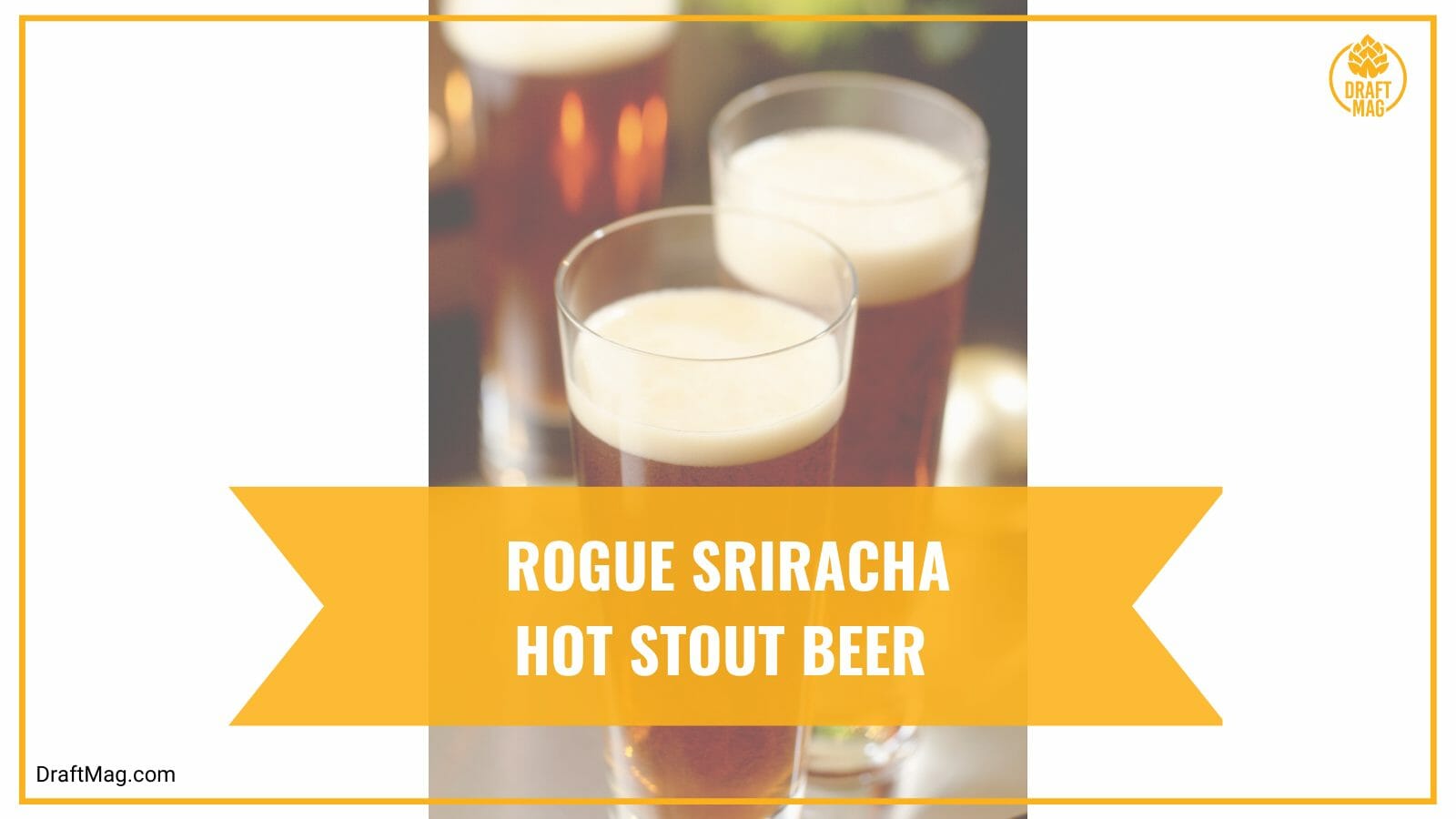 Some other beers with pepper include juniper beer, rosemary beer, spearmint beers and tangerine beers.

Here is a quick recap of everything you need to know about peppers in beer.

Adding peppers to your homebrew is nothing complicated. Any homebrewer can do it, so if you want to try it out, go ahead and use the recipe mentioned above.