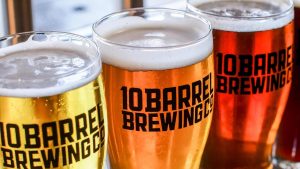 Beer color is the first thing you will notice when drinking a glass of beer.

It’s feasible to make the perfect color combination for a particular hue by learning which ingredients and brewing procedures are responsible for the color of a beer.

You can find Color Flavor Wheels that will help you find the beer color based on the hops, malt, and yeast used. In this article, we’ll walk you through different aspects of beer coloring and the factors that determine the color of a beer.

What Color Is Beer?

The color of beer is transparent pale yellow to a dark brown – nearly black opaque tint when viewed with the naked eye. These colors can give you some clues about how it will taste.

You can expect coffee, chocolate, and darker overtones if a beer is dark because it contains roasted malts. A medium-gold beer brewed with barley or wheat may have some bready aromas, whereas a reddish beer is more likely to be malt-driven, with some fruity or nutty overtones. A light-colored beer will have more vibrant qualities, such as citrus, acidity, pepperiness, sharpness, tropical fruit flavors, and so forth.

Color is a vital aspect of our food and drink experiences, and beer is no different. The color of the beer is the first thing a potential beer drinker notices when it is poured into a clear glass. Color typically evokes subconscious expectations about the forthcoming taste experience.

What Are the Factors Affecting the Color of Beer?

The color of the beer is affected by various aspects in the chemistry of its manufacture and additives.

Let’s look into some of the factors that determine the color of a beer:

One of the most crucial coloring components in the beer is grain. All beers are red at their most basic chemical level. 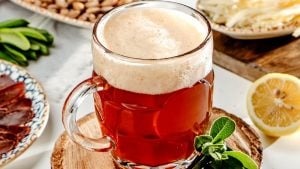 So the fact that most beers aren’t red colored beer – they are generally golden or brown – should tell you something: there’s something extremely essential going on at the molecular level that causes beer to change color.

This is because beer is created from grain starches.

Grain is stained by a pigment known as melanin, which imparts a rust-red color to the beer and is hence the most crucial coloring factor. To change this natural hue, you will have to run a series of chemical procedures.

Dark malts may give your beer a dark color. Beers made with light malts often develop a deeper hue as the color builds up, resulting in a darker colorful brew.

During the process, the pH of water plays an important role; the more the pH, the darker the hue.

Furthermore, the longer the mash stays in contact with the grains, the darker the brew will be. Some brewers maintain the water at the exact temperature while others alter it. After the brewing process, you may see the difference in beer color clarity and limpidity.

As a result of this heat, various flavors and fragrances will emerge. It’s also linked to a darkening of the beer color. In a nutshell, the longer the boiling period of a beer, the darker the beer.

On the other hand, caramelization entails boiling sugar till it disintegrates. Grains grown in the fields do not contain sugars. Therefore you must first heat the grain starch to convert it to sugar.

After that, brewers increase the temperature even further to break down these sugars that just started to develop. This imparts a caramel flavor to the end product. The beer flavor can range from burnt sugar to toffee. The longer the caramelization, the darker it becomes.

There will always be visible color changes in aged beers. Time is color, is a popular phrase in the brewing community. As time passes, suspended substances in beer, such as yeast and polyphenols, settle to the base of the bottle or can.

This implies that the beer will mirror less light, giving the impression of a darker beer. As a result, simply aging the beer will darken it over time. Beers grow less bitter as the isomerized alpha acids that cause bitterness break down over time, allowing the malts to take center stage.

A very acidic combination causes beer to appear paler than usual. Even the chemical composition of water can have an impact. Meanwhile, as pH levels fall, the color of the beer is likely to lighten slightly.

This is primarily caused by the loss of color by some molecules in fermenting beer. The pH levels in beer color follow the natural law here. Hence the denser the pH, the darker the color of the beer.

Boiling is the second most essential component that affects the color of the beer. Boiling duration varies depending on the brand of beer and the preparation. Extract brewers recommend boiling for only an hour. The protein in malt extract coagulates in 10 minutes.

The wort gravity is another essential aspect in determining the color of a beer. The color of the beer will be affected by boiling the wort to a specified temperature.

How To Determine the Color of Beer

You can determine the color of beer using these methods:

The Standard Reference Method (SRM) scale helps determine the color of beer. In this method, the light of a specific wavelength passes through one centimeter of beer. After that, the amount of light that the beer absorbs is calculated.

Porters and stouts have diverse shades of brown, red, and dark brown in general, and they range from 20 to 40 on the SRM scale.

You can determine the color of a beer by comparing it to a color chart. The Lovibond scale, invented by Joseph Williams Lovibond, is the oldest and most widely used technique for determining beer color.

Brewers frequently use this beer color scale to show wort color while utilizing the SRM scale to select the final product.

The color sensation of each individual is a significant disadvantage of the Lovibond approach. Lovibond himself compared wort samples using glass plates colored in the traditional beer hues.

You may also use the equations below:

The EBC color scale, created by the European Brewing Convention and the Institute of Brewing, is a widely accepted method for grading the color of beers, caramel solutions, malts, and other similar-colored liquids. Here the light colored beers have a lower numeric value similar to the SRM scale.

You can also quickly convert one value to another by using the equations below:

It ranges from 2 to 27 SMR units, with lagers and yellower pale worts at the low end and the amber of dark worts, caramels, and beers at the high end.

Whether you are doing it in a lab or at home, determining the color of the beer isn’t challenging.

If you are interested in the exact hue of your beer, try these steps:

While using this method, you will only get reliable results in natural light. The beer will be brighter if you use other artificial light sources, for example, a flashlight.

In this situation, you may use the Lovibond scale to determine the color of your beer. Also, the subjectivity of your eyes will influence the outcome, as not everyone perceives color in the same way.

If you wish to specify the numerical color value on the SRM color chart, you will need cuvettes, a spectrophotometer, and a computer with the appropriate software.

What Are the Colors of Different Beer Styles?

The colors of different beer styles depend on their SRM value. Blondie beers, citrus combos, pilsners, and sour beers all have light SRM colors, ranging from 2 to 11.

You will find red and orange colored beer like amber ales, IPA beer color ranging from orange to amber, and other lagers in the 11 to 20 range. However, after 20, you’ll find dark beers.

Beer coloring is a hot topic for beer enthusiasts and craft brewers alike and generates a lot of debate, but in the end, it is all about the experience. 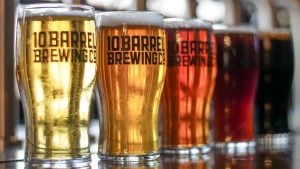 A brilliant golden beer may conjure up images of summer days spent in beer gardens, while a reddish-black beer with a thick brown head may bring back memories of malty roasted tastes and sitting in front of a raging fireplace.

Here are the important points we have learned in this article:

There are, however, variations in style depending on the brand and recipe. As a result, beer color is all about probabilities and expectations. To truly comprehend how the beer tastes, you must do more than admire its color – you must open it and drink it!