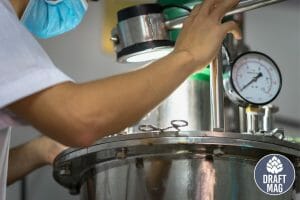 Pressure fermentation is a technique for making beer, and if you cherish those evenings you spend with a glass of beer in your hand, then there is a huge possibility that you have already heard about it, and why wouldn’t you? It has been a buzzword in the homebrewing community for a long time, and you will see almost everyone talking about pressure fermentation both online and offline.

If you’re curious about what this method really is, then you’ve come to the right place! In this article, we’ll be having an in-depth look at what pressure fermentation really is.

Traditional fermentation refers to the procedure where yeast converts wort’s glucose to ethyl alcohol and carbon dioxide (CO2). Fermentation is a chemical process widely used in the brewing industry as beer receives its alcoholic elements and tangy flavor through fermentation.

Throughout the fermenting under pressure process, CO2 keeps getting produced and creates more pressure in the vessel. With the high pressure and high temperatures inside the vessel, pressure fermentation occurs.

We already know the definition of pressure fermentation and how it takes place. Let’s now discuss the various techniques of fermenting beer under pressure at home.

You will need two instruments for this procedure, and the first one is a suitable vessel where pressure fermentation will occur.

Vessels made of plastic or glass will not work; you will need a vessel or a keg that can endure enough pressure for the process. There are different kegs from different brands, such as Fermzilla or Cornelius kegs. Other brands are available in the market and they are also helpful, but you must carefully read the keg label where its capacity is described before buying it. 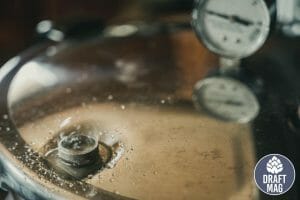 After procuring the perfect keg, you will be ready for your beer to ferment under pressure when you get a spunding valve. Getting a spunding valve will assist you in adjusting your desired pressure as it’s a valve that modulates the pressure in the fermenter. Adjusting the carbonation is also possible with this tool.

The spunding valve must be attached to the keg to keep it pressurized and manage the CO2 release.

When fermentation starts in the keg, close up the spunding valve as long as the fermenter is reaching your desired pressure. When you are done with adjusting the pressure, CO2 begins to be released, increasing pressure in the fermenter.

Remember that most pressure durable kegs contain a PRV (Pressure Relief Valve), but regulating pressure is the task of the spunding valve. The PRV should only be used for defense.

Doing this process will ensure that pressure fermentation works to produce delicious beer.

You don’t need as much pressure because yeasts die or their stem cells are reduced as unhealthy yeast causes unhealthy pressurized fermentation. So it’s wise to start with comparatively lower pressures and increase the pressure gradually.

Choose the correct pressure considering yeast growth along with your keg’s capacity. Bear in mind that different kinds of yeast respond to varying levels of force.

Lagers and Ales are the two best yeasts that will bring the best results after being fermented under pressure.

As mentioned earlier, not all yeasts perform well under pressure, so choosing the right kinds of yeast is necessary for a successful outcome. You can select ale and lager yeasts as both are useful under pressure, but these yeasts have their differences.

Fermenting lager under pressure demands a higher temperature that speed up fermentation. Producing clean lagers in the quickest possible time can happen by fermenting under pressure.

On the other hand, ales demand lower pressure to ferment fast and attenuate perfectly, as it’s sensitive towards increased pressure. Pressure fermentation assists hoppy ales like IPAs to hold the hoppy flavor by not being eliminated by CO2 production.

Benefits of Fermenting Under Pressure

We discussed the definitions and procedure of pressurized fermentation above. Now, we will talk about the benefits of fermenting under pressure, which will help us understand its popularity among homebrewers.

When you choose pressurized fermentation, you can ferment at a warmer temperature without the usual off-flavors of byproducts. In fermentation procedures, the production of different byproducts is normal, which adds an unwanted aroma to the beer.

For instance, ester is generated in fermentation that creates fruity flavors in beer that is unexpected, but pressure fermentation suppresses the chance of producing byproducts like ester and their flavors due to its suppression of S2 production.

Oxidation denotes changes in a chemical substance because of the addition of oxygen that is able to enter during the normal fermentation procedure, but the fermenter we use during pressurized fermentation becomes sealed after pressurizing, reducing the chance of oxygen entering the vessel.

In addition, because your fermentation vessel’s headspace is full of CO2, you remove oxygen, making your beer last longer. Oxygen-free fermentation leads to higher-quality beer, which is another significant advantage of pressure fermentation for home brewers. Ensuring the usage of top-notch quality products can be secured this way.

This is one of the vital advantages of pressure fermentation. During fermenting under pressure, fermenting happens at higher temperatures than average, resulting in faster fermentation that saves the brewer’s time.

Fermenting under pressure allows the beer to be utterly carbonated in the fermenter naturally using a spunding valve. This also means you are getting free CO2 from your yeast, and your desired carbonation level will be ready faster, which means you can have your beer carbonated just after the fermentation process. You are free from the hassle of carbonating it later, and it saves you money along with time and energy.

As you are fermenting with higher temperatures, complete attenuation has a far better chance of being reached faster. Beers like New England IPA and wheat beers have volatile ingredients that can make a huge difference in a pressurized fermentation.

Fermentation under pressure is less vigorous, resulting in comparably small krausen, the foam we find at the top of the beer. So you can enjoy a lower headspace than usual and ferment more beer at once from the same fermentation vessel.

Hops are the dried cones that are used in brewing to give a distinct taste, aroma and flavor to the beer. Another benefit of pressure fermentation is that it takes place in an air-tight system that saves the aroma and flavor of hops that you could lose during traditional fermentation.

Thus, we can make sure that the beer has a better taste. Pressure fermentation tends to lead to an improvement in hoppy beers for many people. Take note that as we are all different people and our taste buds are different, there is no guarantee that everyone will be fond of the flavor that the beer fermented under pressure offers.

Despite having so many positive sides, pressure fermentation also has some disadvantages. Before you use this process for brewing your beer at home, you should first be familiar with these disadvantages.

Using a massive amount of pressure can stress your yeast, which can result in below-par fermentation. Overpressure causes lower yeast growth, and yeast cannot convert as much glucose as needed, which causes under attenuated beer.

To refine beer production, you have to keep the fermentation pressure between 10 to 15 PSI, any more than that and you will be in trouble.

To perform pressure fermentation, you will require some extra equipment like a spunding valve for controlling pressure, viable kegs, hoses, a CO2 tank, and some more elements that will cost you money.

Dry hopping is the process that is done to add flavor to the beer at the very last stage, but this is difficult to do with beer fermented under pressure. As beer is already carbonated after undergoing pressure fermentation, dry hopping generates a volcano when mixed with it because dry hops add more nucleations with the liquid. With this in mind, be very careful when dry hopping after pressurized fermentation.

Dry hopping is a regular task while you are carrying out traditional fermentation, but it becomes a critical problem when brewing takes place under pressure. When you try to add the hops to beer fermenting under pressure, something like a volcanic eruption happens, similar to when we put mentos in Coca-Cola or Pepsi Cola.

It’s not an enjoyable experience, so it’s better to avoid such incidents and follow a few steps you can take to eliminate the hassles of dry hopping under pressure.

Here are three methods you can follow to add dry hops to your pressurized brew safely.

Repeat this process a few times more as this will remove all the stress. Now open the fermenter and add the hops rapidly before closing it again.

Another way to dry hop is to fill a bag with hops and a magnet, then bind the bag. Keep the bag inside the keg or fermenter, then place a second magnet outside the keg, making sure the two magnets are touching each other.

The hop bag has to stay above the wort level, and at the moment of dry hopping, withdraw the outside magnet, and the bag will ingress the wort. This way, dry hopping is possible while dealing with pressure fermentation.

There is another way to dry hop safely, but you will need two fermenters or kegs for this. Place your dry hops into the sealed second fermenter, then transfer the beer of the first fermenter to it. 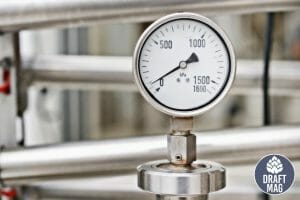 This article hopefully provided you with essential insights into pressurized fermentation. Disadvantages are present, but the benefits of this fermentation outnumber them, so when you want to produce delicious beer in the fastest way and enjoy the bonus of adding carbonation to the liquid without risk of oxidation, under pressure brewing is a good option to try.

With all these in mind, of course you can still choose to go with the conventional fermentation, but pressure fermentation has been proven to be a crucial and helpful tool for home brewers worldwide.