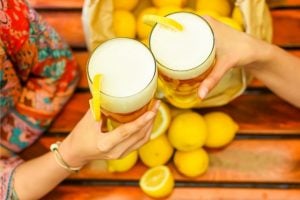 Lemon in beer that enhances its taste or a glass full of beer with ice cubes and lather at the top: Which one would you choose? Most beer lovers prefer a glass of chilled beer with a tinge of lemon and the company of friends!

This article will unfurl everything there is to know about putting lemon in beer: Its health benefits, how it affects your beer’s taste, and what alternatives you have. Keep reading!

The History Behind Mixing Beer and Lemon

The culinary world is vast and every recipe has a history. Some dishes and drinks were prepared accidentally while some were carved with a clever formula. As far as drinks are concerned, there are infinite permutations and combinations you can try.

The history of beer and lime dates back to a sultry afternoon in June 1992 in Munich, Germany. 13,000 cyclists stopped over a tavern and demanded beer.

The server noticed the beer stock running out and decided to mix lime/lime soda with beer to quench their thirst, and the rest is history. A new light beverage came into being that energized the cyclists without even impacting their health.

Why Put Lime in Beer?

You might be wondering why people offer beer with lemon or put lime in beer. The answer is hidden in lemon’s multiple health benefits and taste-enhancing ability.

– It Contains a Lot of Vitamin C

Citrus fruits, such as lemons and oranges, are high in vitamin C — a powerful antioxidant protecting cells from free radical damage. Did you know that bone production, connective tissue healing, and gum health all require vitamin C?

– It Enhances the Skin Texture

Vitamin C found in lemons also aids in the prevention of wrinkles, dry skin from aging, and sun damage. Moreover, it also catalyzes the production of collagen, which is vital for skin health.

Along with being a powerhouse of vitamin C, lemon is also rich in antioxidants. Research says that these two nutrients are good for your heart and help avoid heart disease and stroke.

Also, some of the fibers in lemon help neutralize several risk factors associated with heart disease.

– Aid in the Prevention of Kidney Stones

Lemon juice’s citric acid avoids kidney stones caused by calcium oxalate buildup, and the excess fluid from the water keeps you hydrated and washes out any possible kidney stones.

Moreover, a touch of lime juice can naturally remove all the toxins inside your liver. Lemon’s acidity stimulates nerves in the digestive tract and liver, promoting proper digestion and bowel functions. Excessive alcohol use can cause liver damage, which lemon juice helps to do away with!

Besides the plethora of benefits that lime and beer together offer, the combination is also well-known for its taste. It’s considered moderate alcohol consumption and is even endorsed by physicians.

CAUTION: Too much beer can cause severe health problems–liver disease, weight gain, and even cancer–especially when you’re undergoing treatment in whatever way or form!

From cooking to preparing cocktails, beer is a versatile product with a global fan base. If you’re a cocktail lover, there’s an entire list of drinks you can prepare within minutes.

However, mixing lemon and beer is primordial, and the combination has been served as a drink for decades. Besides the obvious health benefits you can expect from adding lemon to beer, here are a few other logical reasons to do so:

Generally, beer is consumed directly from the bottle and is seldom served in a glass. There’s a high chance that dust may accumulate on the bottles since they’re stored in dark and dust-laden warehouses. In these situations, bartenders sanitize the bottle top with a lemon wedge.

Lime reduces the intense taste of beer and makes it mild. Brewers utilized steel beer cans back in the day, which occasionally led to a metallic beer flavor.

Adding citrus to beer in cans helped improve the taste of beer. Some claim that lemon also masks the skunk beer flavor that develops when the beer is exposed to sunlight.

The bitterness of the beer is softened by the citrus flavor, making it more flavorful to drink. Also, lemon and beer together make a fantastic duo that delights mellow drink lovers.

A popular notion is that bartenders put lemon in beer as part of a marketing plan. Since most individuals associate citrus with beaches, the sea, the sun, and relaxing times, a lime-laden beer appears unique and appealing.

Serving beer with lemon is fascinating, and the presentation looks pretty cool too. This has a positive psychological effect on beer lovers.

Can You Mix Lime With Every Beer?

Lime with beer is indeed enjoyable and has a delightful taste. But did you know that not every type of beer is suitable for adding lemon? Only light flavored beer should be mixed with lemon juice or lime. It’s recommended that you do not mix lemon with dark and hard beer.

Caution: Do not expose the lemon and beer mixture to sunlight! Also, refrain from mixing the two under sunlight. Consuming such beer can lead to Phytophotodermatitis, popularly known as the “lime disease.” This happens due to the chemical reaction of furocoumarin — a lime compound — with sunlight. 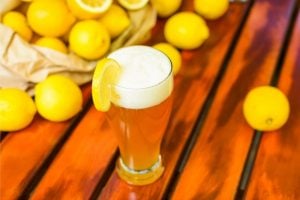 Furocoumarin is a chemical compound found in lemons that causes an adverse reaction on coming in contact with UV rays. Note that it’s not the drink per se but the reaction of lime, certain types of beer and sunlight that poses a serious threat.

Phytophotodermatitis causes skin reactions and irritation. Note that the reaction can be mild, moderate, or severe. The worst-case scenario is when you develop rashes, redness, brown marks, or blisters. These generally can be seen either within minutes or 24 hours of consuming the drink.

– How Much Time Does It Take To Recover From Phytophotodermatitis?

So, next time you decide to add lime to your favorite beer brand, find out whether that beer brand is lemon-compatible and follow all the precautionary measures strictly.

How to Mix Lemon and Beer?

Preparing a lemon beer isn’t rocket science and doesn’t require more than just a few attempts to master. Start by selecting your favorite beer, and then choose any one of the following techniques.

This first technique mixes beer and lemonade: Take a look at the process and the specific ratio of the ingredients!

It can be pilsener, wheat, lager, or a light beer served very cold. Shandy — a famous summer drink that combines pale lager beer and lemonade — takes advantage of this match.

Prepare a lemonade with or without gas, but it should be fresh. Some people serve it with lemon slush, which makes a delicious combination.

Of course, adding lemon to your glass right before drinking is an easy method to ensure that the lime in your beer tastes as fresh as possible. This also ensures that it does not lose its fizz.

Slowly build up the foam; don’t produce too much, but refrain from making the panache without it too. Remember: A good drink needs two fingers of foam to keep the beer from rusting and losing its flavor.

Including four parts of lemon for every six parts of beer is perhaps the best ratio to go for, but you can always improvise as per your personal preference. Moreover, you can also add ice on the top.

Bartenders add citrus to beer with perfection — they know the exact proportion of lemon to add. However, you won’t find bartenders everywhere, so this is where our technique 2 comes into the picture!

Cut an entire lemon into wedges. Make sure it’s not thicker than the beer bottle’s diameter. This will make it difficult for you to insert the wedges on the bottleneck. You can also wipe the top surface with lemon as it sanitizes the bottle top. You’re now ready to enjoy your chilled beer.

In case you want your beer to have a strong citrus taste, push the lemon wedge inside the bottle. Next, lock the bottleneck with your thumb and turn the bottle upside down. To get the perfect citrus-infused beer, repeat this process by adding more lemon juice (as per your taste).

And if you’re someone who doesn’t prefer lemon wedges in their drinks, add fresh lime juice directly to your beer!

What Else Can You Put In Beer?

Putting lemon in beer is a classic way to serve chilled beer. The combination tastes incredible and benefits both your physical and mental well-being!

In addition to using lemon, there are four typical ways you can prepare a glassful of refreshing beer. These techniques are old but still common in modern bars and restaurants.

So, here are four other ingredients that you can mix your beer with:

An awkward combination indeed, but salt makes beer crispier in taste. It surfaces the exact taste and flavor of the beer. Moreover, a bartender will know exactly how to mix these elements in proper proportion to bring out the real taste.

Soda is perhaps the most common thing to pour into beer. Remember that, the harder the beer, the less soda you need to add to balance the taste.

The ratio you use depends on the flavor you want. A 1:1 or 2:3 ratio is probably the best. The margarita mix lightens the bitter taste of beer and allows you to customize your flavors. 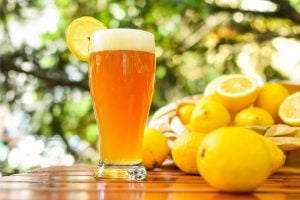 A lot of people add a lot of fruits to their beers. While berries such as blueberries and raspberries are the most common fruit additives, citrus fruits, such as lemon, are still the most attractive option.

A citrus slice not only disinfects the bottleneck but also improves the beer’s flavor and appearance. However, only light, lager beers can be served with lemon. Having learned the health benefits of adding lemon to beer, all you now need to do is pick a technique you like, zero in on the proportion of lemon, and gift yourself a lemon beer!