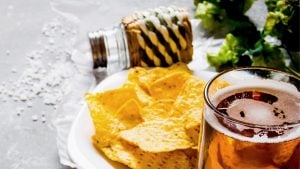 You can add salt to beer to change things up, and this is only one of the many ways. While beer cocktails are a popular practice, it’s pretty common to add diverse food to your beer. There must be a good reason why this practice has become very popular among beer enthusiasts and even beginners.

This complete guide would dive into the world of adding salt to your beer and why people do it.

Why Do People Put Salt in Beer?

People put salt in beer to improve the taste, make it foamier, win a bet, increase your alcohol intake for the night or because they saw their parents or grandparents do it. There are different reasons why people enjoy putting salt in beer, and if you try it, you might end up enjoying it too.

– Acts as a Cocktail Hack

Adding plain old salt to your beer makes a good cocktail hack if you can’t make or aren’t in the mood for a standard cocktail. The mix of salt in beer would bring out the true taste of what you’re drinking, making even the plainest and cheapest beer taste more delicious.

Sometimes, adding table salt to your beer would improve the aroma and give off lemon or lime. Despite this, the result you get would differ from beer to beer.

Although adding other foods like lime or lemon tastes great too, putting salt in your beer would give you a makeshift cocktail. Keep in mind that you’ll notice the difference in the taste more if you’re drinking a mildly flavored beer. So, when next you’re going to the bar, you can order one of the milder flavors and add a pinch of salt.

There’s no doubt that adding salt in your beer translates to more bubbles in it. So, if you want your beer to have a large and foamy head, then you can just add a pinch of salt to it. This is caused by the interaction of salt with the carbon dioxide bubbles in your beer, leading to large volcano foam.

Keep in mind that this won’t make your beer taste fizzier and they would also disappear quickly. But, you can enjoy the large foamy head on your improved beer.

Before adding salt to your beer, you should drink a third of the cup first so that you don’t make a mess. Also, if you want a naturally foamy beer, then you can go for high malt beers.

When you put a pinch of salt in your beer, it doesn’t only increase the bubbles but it makes the drink more flat. The gas in the beer is released as foam, which means you have a less gassy beer whenever you add salt. Drinking gassy beer can cause you to produce a lot of gas afterwards and even lead to alcohol bloating, but you can avoid this by adding salt.

Keep in mind that while this seems alluring, you would also end up drinking flat beer. The upside here is, the beer might taste flat, but the flavor is positively different, leaving you with a brand new makeshift cocktail. You can reduce the gas in your beer in other ways like tipping the glass at 45 degrees when pouring.

Many people also say that drinking salt with their beer allows them to consume more beer than normal. So, if you’re looking to drink a lot more than usual in one night, you should go to the bar with your salt or ask the bartender to add some for you.

This is related to the increase in bubbles and reduction of gas in beer. Since you make your beer flatter, you can drink more of it without getting affected by the gas. At the same time, adding salt to your beer would also give you a better mouthful with each sip. 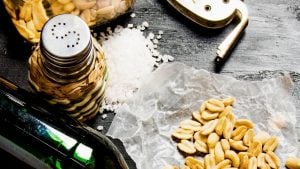 Aside from these reasons, family tradition is a popular answer people give when you ask them why they add salt in their beer. Grandparents are widely known for salting their beers all the time, but this is probably because beer brewed back in the day lacked flavor.

Also, brewers used to add salt to their beer a lot until the licensing laws changed. This caused them to make profit, as sodium made the drinkers thirsty. So, the grandparents might be used to drinking saltier beer than what they make today.

How To Salt Your Beer Properly

There’s no special process involved in salting beer, as long as you know not to dump a truckload of salt in it. When salting your beer, you should start with choosing the right kind of beer to use.

Strong-flavored beers like stout, porter or Indian pale ale won’t go well with salt, and you might not notice the difference. Instead, you should stick to wheat beers, lagers and pale ale.

You can start with adding only a pinch of salt to the top of your beer and tasting it. Over time, you would figure out how salty you like your beer. You can also decide to line the rim of the mug, can or glass with salt to avoid foaming.

It’s best to get started with normal table salt before moving on to bolder beer salts.

Is Salt Used in the Brewing Process?

Yes, some brewers add salt to the beer during the making process to produce salted beer. However, do not expect these beers to actually taste salty. The addition of salt would only round up the flavor and make it stand out.

Mostly artisan brewers or companies trying experimental flavors would be found adding salt to your beer during brewing. Other brewers use Himalayan pink salt rather than standard salt.

By simply checking the ingredients used to make your beer, you can figure out if salt was added and how it interacts with the other flavors. Salt usually goes well with eclectic ingredients to round them up and create a fantastic taste.

One of the most popular beers with a tight connection to salt is the Gose beer, which was initially brewed in the thirteenth century. The beer originates from Goslar in Germany, and is known for being intentionally salty. The brewers combine salt with lemon and herbal for a distinctive flavor. Nowadays, bartenders add a dash of salt when serving Mexican beers too.

So, clearly, there’s nothing new about adding salt to beer. The only difference is that the salt here is added during the brewing process, and not adding table salt to your pint of beer at the bar.

Does Salting Your Beer Make You Drunk Quicker or Not?

Yes, probably the best part about salting your beer is how it makes you drunk quicker, but at the same time protects you from a hangover, which most people get after overindulging in sweet alcohol.

When you drink too much alcohol, your sodium levels drop and your body becomes dehydrated. This is what leads to having a hangover the next morning. But, it seems possible to reduce the hangover effects by consuming some sodium chloride (salt) while drinking beer.

The Effect of Salt in Beer

Putting salt in your beer is also said to reduce the dehydration caused by drinking alcohol, the same way those working in hot places or people during warm months take salt tablets.

On the other hand, when you consume a large amount of sodium with your beer, your body will absorb alcohol more quickly. So, you get drunk quicker. Combine this with the fact that salting your beer encourages you to drink more, and you’re in for a wild experience.

This works by enlarging the duodenal sphincter, which is an opening under your stomach. Then, the alcohol passes through there and into the small intestine faster than normal, and then your blood absorbs it.

While this works to get drunk quicker, taking a lot of salt might mean you won’t be able to do much about the impending hangover. It’s unclear how much salt you need to add for beer to make you drunk quicker, but you can start with a pinch and figure out what works for you best.

In some cases, adding salt to beer is not talking about the normal table salt that you can also add to your food. Instead, it refers to beer salts, which would undoubtedly change the flavor of your beer. Beer salts are specifically designed to make your mild beers taste more flavorful.

They usually come in different flavors, with lime and lemon being the widespread options. This type of beer would give your beer a sour and tangy flavor, similar to when you add a slice of lime or lemon to your beer or cocktail.

Asides from these popular flavor profiles, there are other ingredients that can be added. Some popular flavors include orange, hot lime, and more, mostly citrus flavors, depending on the producer. And sometimes, beer salts are flavorless.

This salt is mostly found in Mexico and different places in Central and South America. Beer salt feels coarser than normal table salt and it is also more specific in its flavor. If you’ve been using regular salt in your beer for a while, you might want to change things up with beer salt.

Should You Put Salt in Your Beer? 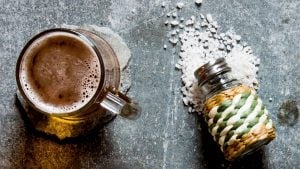 Now that you know all the wonders putting salt in your beer can do for you, you shouldn’t hesitate to try something new. After all, if everyone is doing it, there must be a good reason for it, and that’s mostly how it makes your beer taste a good kind of different.

Keep in mind that you should start small when salting your beer, from pinches to dashes and then to flavored beer salts. And if you start with a pinch of salt and don’t like the taste, you can simply never do it again.