In this complete guide, we’ll cover the details of the waterfall drinking game and its rules. As you enjoy this exciting game, it’s important to always remember to drink responsibly.

What Are the Waterfall Rules?

The Waterfall game rules involve spreading out the cards in a circle surrounding an empty beer glass. All the cards should be touching, and the dealer starts the game by randomly taking a card. Other players will then take turns flipping the cards, which have different specified actions.

The waterfall game combines drinking and playing cards to create a sense of festivity and fun. It is a perfect game for groups of friends looking to add some excitement to their night out drinking. This game aims to make you have fun while you enjoy one drink or two, or maybe even get drunk.

Eachcard on the table has a corresponding action, and the actions usually range from taking a drink, picking someone in the group to drink, or everyone having to take a swig. Like several other similar games, there is no actual point scoring system in this game; it’s just for fun! However, there might be differences in the good rules based on your region.

Also, the game is relaxed and casual, allowing you to personalize it to your taste. However, it is best to use the standard rules if you are playing the game for the first time. Each instruction is set to make one or more people in the group take a sip of their drink. Get ready for the fun!

Waterfall is one of the simplest DIY drinking card games out there because you can create a game of your own. These are the important things you need to play the game:

That’s all it takes to play this cheap and fun game!

– Setting up the Game

The waterfall setup is straightforward; there’s no simpler one out there. Once you have everything you need to start the game, you are ready to go. Follow these simple steps:

It is best to choose something light for this game because you may have to sip your drink throughout the game. There is also the risk of drinking too fast as the game progresses, so it’s in everyone’s best interests to go with less heavy drinks. Therefore, you should go for something like:

Waterfall Rules for an Exciting Game

As mentioned earlier, the rules are flexible because they may differ for each region. Regarding what the playing cards do, fives, sevens and eights have the most flexible interpretations. Unlike similar drinking card games, there is no communal cup of punishment in the Waterfall game. Furthermore, there’s the freedom to use non-alcoholic beers in case you are a non-drinker.

You are free to set preferred House Rules with your friends; you can make it as flexible as possible. However, some set rules have been passed from generation to generation. Here, we will discuss the actions contained in each card. Consider this the waterfall card game cheat sheet.

– When You Flip a Two

You can choose another player to drink two sips of beer if you draw a two from the deck of cards. Given how the game is designed, there’s nothing wrong with making someone take two sips. They will probably be relieved to only take that little, given how outlandish the game can become.

– When You Flip a Three

If you draw three from the deck of cards, you take three sips of your drink. With this in mind, you can also draw a three without worrying.

– When You Flip a Four

If you draw a four when it’s your turn, all the ladies in the game will drink. If you’re all ladies, then everyone drinks up!

– When You Flip a Five

In this case, you are given the power to make a rule. When you make the rules, every player must abide by your rule. Any player who breaks your rule will take one sip of their beer. This is a fun part of this drinking game.

Some of the funny rules you can implement for this game include:

– When You Flip a Six

This is the opposite of drawing a four. If you draw a six from the deck, all the guys in the game will drink.

– When You Flip a Seven

– When You Flip an Eight

If you choose an eight from the cards, you will select a playmate among the other players. The mate you choose will drink at any time you also do. Even if you go after your mate during the game, they will still have to drink again because you will too.

– When You Flip a Nine

– When You Flip a Ten

Any player who draws a ten will pick a random category and start by giving an example. Moving clockwise, every player will take turns to name new things within that category. The player that repeats an already mentioned word or fails to say a word must take a drink.

Some examples of categories you can choose are:

– When You Flip a Jack

“Jack Goes Back!” Every player takes a drink when you draw a Jack in waterfall.

– When You Flip a Queen

Questions Time! If you draw a queen, you will turn to another player and you can ask any question you want. That player must respond by asking the next player another question of their choice. This will continue until one player fails to respond with a question or they take too much time responding to the question.

To make this more fun, you can distract your friends by making funny faces and making them break character. You can make your question as ridiculous as possible to make them laugh and take too much time.

Remember that you can’t repeat a question. You also cannot ask someone who asked you a question. Doing these will also disqualify you and make you drink.

– When You Flip a King

– When You Flip an Ace

This is likely where you can get drunk, especially if you use alcoholic beer. Everyone has a different level of beer remaining in their bottle, can or glass. Therefore, a player can finish their beer faster than others while some people keep sipping. For this reason, you should have reinforcements on your hand as you never know when someone will chug a whole beer in front of you.

This drinking cards game is an exciting party starter and a great way to have fun with your friends. You can even go ahead to print out the waterfall rules to help each player remember what the cards entail.

Waterfall is the king of all drinking games; an excellent way to start an evening with some friends or break out in the middle of a party. We’ve discussed the rules of the game and how to play it; let’s summarize some of the things we mentioned. 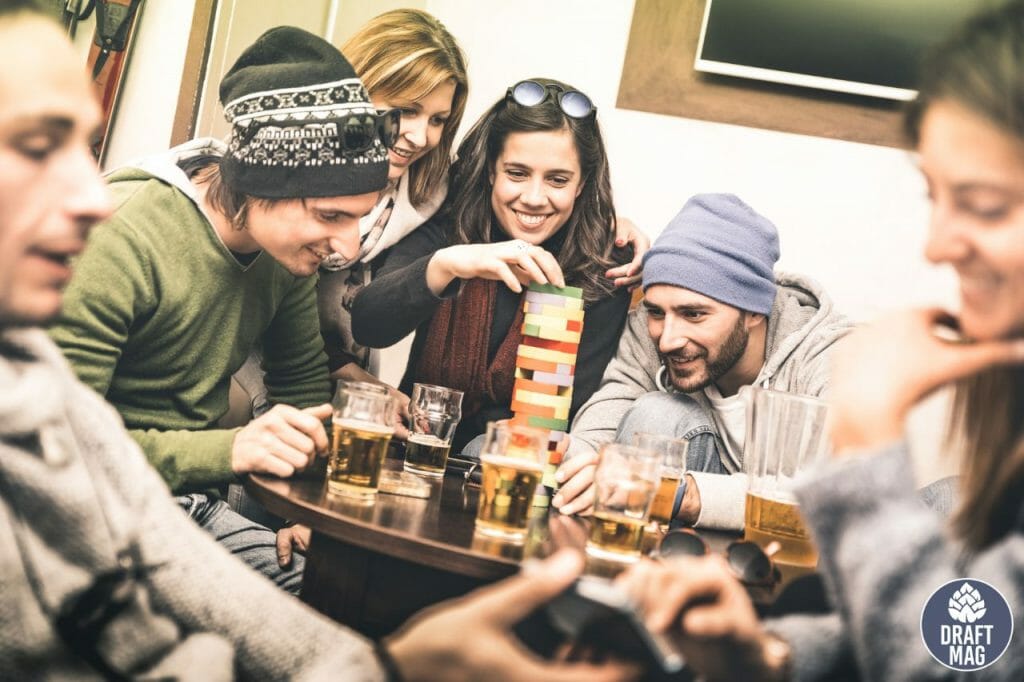 So there you have it; read through the rules discussed in this article and get used to the game’s peculiarities, then you can set out to have fun with your friends and play Waterfall. Always remember to drink responsibly!