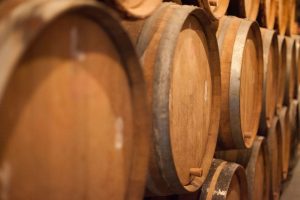 Barrel aging beer isn’t a new concept in the brewing industry. It’s an ancient practice and has been used for many years to get the desired flavor out of beer. But how to barrel age beer? Which barrel is the best for aging beer? What should be the duration for barreling beer?

These questions can confuse anyone, particularly new brewers. So, here you’ll find answers to all your queries related to aging beers in barrels.

What Is Barrel Aging Beer?

Barrel aging beer is defined as a process during which beer is kept in wooden barrels for some time. This process of storing beer in barrels for a specified duration aims to impart flavor from the wood to the beer. Different types of barrels give a different flavor to the beer.

The barrels are mostly made up of wood, especially oak wood barrels. Oak wood barrels are a popular choice due to the variety of flavors they add to beer. Apart from oak barrels, other woods used for making barrels include ash, poplar, cedar, pine, etc.

How to Barrel Age Beer?

The procedure to barrel age your beer is given below:

Finding the right barrel for barrel aging beer is the most challenging part of the whole procedure. You can get the barrel from a micro distiller or local craft brewery. However, local craft breweries hardly ever sell their barrels. Still, they will provide you a barrel if they have a barrel program in which they receive orders for barrels abundantly, so it’s worth trying.

While choosing the perfect barrel, you must acknowledge its size. The size of the barrel matters in barrelling beer, so you have to choose wisely. Some pros and cons of small and large barrels are given below:

– Prepare Barrel for Being Filled With Beer

For aging beer in barrels, you’ll need to prepare your barrel for filling with beer. For this, make a hole at the bottom of your barrel. Close the hole with a stainless-steel nail. The purpose of this is to make the barrel ready for sampling during barrel aging beer.

If you need to have a sample during the process, you can remove this nail, take the sample, and close it again. To close the barrel again, sanitize the nail or replace it with a new one to avoid contamination in your beer.

You should never keep a sanitized and clean barrel empty for long periods. The best practice is to fill it with beer within 28-48 hours.

What Is the Process for Barrel Aging Beer at Home? 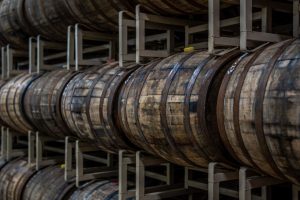 The process for homebrew barrel aging is similar to that used on the commercial scale in most ways. But in the case of a home brewery, you have more options for barrels. These include:

The DIY barrel aging allows you to make your own barrel for aging beer. After you’ve selected the barrel, the next steps of sanitizing, cleaning, and storing are similar to that of commercial-scale brewing. In contrast to commercial brewing, barrel aging homebrew allows you to age less beer at a time — but it will be your own!

What Happens During Barrel Aging Beer?

The storage period of the beer in the barrel causes changes from beer to beer due to alterations in temperature and humidity. As time passes, the beer is gently filtered by the wood of the barrels. Some of the beer will also evaporate during storage.

At the same time, the wood of the barrel gives a unique flavor to the beer. It’s because of the compounds such as vanillin and tannins extracted from wood while aging beer in barrels. The cumulative effect of barrel aging beer is that the finished beer has more flavor and a unique color.

What To Consider While Barrel Aging Beer?

To get the desired results from barrelling beer, here are a few things that you should consider:

Longer aging periods don’t promise better beer flavor. Sometimes beers get the flavor you want in two months, but you may have to wait longer in other cases. To ensure that you don’t age the beer for longer periods, frequently check the beer.

Unlike other beer-making techniques, barrels in barrel aging impart flavor to your beer. In other methods, things used for storage or fermentation don’t give any characteristics to the beer. So, you should treat the barrel as an ingredient and choose it carefully. If you select wood barrels, you should know which wood will give which flavors to your beer.

Which Beer Styles Are Excellent for Barrel Aging?

Some beers are excellent for barrel aging, and these include:

Beers having a minimum of 8-9 percent ABV are excellent for barrel aging. There are many reasons why they are better suited for barrel aging than those with a lower ABV. These include:

– Beers Having a Sour Taste

Sour beers usually have an alcohol content of less than 8-9 percent, but they can benefit from barrel aging just as well. In fact, the microbes that you use during the process decrease the pH of the beer. The reduced pH leads to the inhibition of the harmful bacteria’s growth that affects a beer’s flavor during aging.

Thus, sour beers are suitable for barrel aging, even for longer periods.

Which Beer Styles Are Not Suitable for Barrel Aging?

The beer styles that are not suitable for barrel aging include:

Hoppy beers include IPAs, DIPAs, and Pale Ales. These beers have a higher hops content and are not suitable for barrel aging due to the following reason:

Lower ABV beer styles are not suitable for barrel aging because:

What To Do for Maintenance and Care of Oak Barrels for Aging?

If you’re aging beer in oak barrels frequently, then maintenance becomes a must. The health and, consequently, the flavor of your beer will depend upon how you maintain and store your barrel.

The best place to store oak barrels is anywhere the sunlight isn’t direct and the temperature is constant.

How Long Does It Take to Age Beer in Oak Barrels?

There isn’t any fixed time duration for oak aging beer. For this, you should trust your taste buds. If you feel that your beer has attained the flavor you wanted, you can remove it from the barrel. 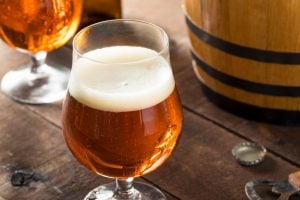 Barrel aging beer is a simple process if you do it the right way. After reading this detailed guide, you must have noted the major aspects of aging beers in barrels. These include:

With this comprehensive guide in mind, you can expertly barrel age beer even if you’re not a professional. Just remember these things and if you feel the need for professionals’ help at any point, go for that. No matter how easy it seems, always follow the exact procedure for not affecting the final goal: your beer’s overall flavor!

How to Measure Alcohol Content Without Original Gravity: A Clear Guide