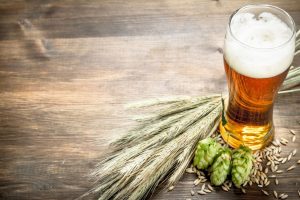 Double dry-hopping hasn’t been technically defined by the brewing community. What it means, though, is the addition of hops post the fermentation process on two different days. The first addition happens one week before kegging and the second dose comes in four days before kegging. What does it do, you may wonder? Well, it adds a burst of hops flavor increasing the complexity of the beer. Let’s look further into what is double dry-hopping in the brewing industry.

What Is Double Dry-Hopping in Brewing: Everything You Need To Know

DDH is most prominent in IPAs. These days breweries are building their brands with the label “double dry-hopping” on them. With all the hype that is surrounding DDH, and with people willing to pay almost double the price for a four-pack, the world wants to understand whether this is the newest dominant style.

Hops are added in different cycles in the brewing process to extract flavors and different aromas from them. This helps define the levels of bitterness and sweetness a beer is going to carry. Brewers keep adding hops and malts until they get their desired IBU profile to match their style guide and to cater to specific taste buds. If the brewer wants to create more hop flavor, he simply increases the hop quantity from the base recipe.

Technically speaking, hops added to the wort at the end of fermentation will convert fewer alpha acids to iso-alpha acids, which thereby leads the beer to retain more aromas causing the citrusy, herbal, or grassy notes. On the other hand, dry-hopping is adding dry hop pellets to the brew on secondary fermentation or after the wort is cashed. By adding hops after the boil, the essential oils are not completely extracted therefore passing only the aromatics to the final brew, leaving the bitterness behind.

The choice depends on the brewer and his beer goal. Double dry-hopping is a tad bit longer process than dry-hopping. But the results are much different and louder than any other beer out there. If you are the type of homebrewer who prefers louder aromas, then you must decide the quantity and method of adding hops to maximize the aroma output.

Just know that, in the last decade, the number of American breweries and homebrewers has tripled, and the production of IPAs has doubled. But what are the different results you can get with single dry-hopping vs double dry-hopping?

Let’s try and get to this in the simplest possible way. Making a simple beer is as easy as cooking. Just follow the instructions, be precise about the measurements, and voila, you have a beer. A simple beer has one malt and one hop. Technically, this is known as a SMASH (single malt and single hop) beer. This we call an ale or a lager.

Dry-hopping Techniques: What the Experts Recommend

In a study by Oregon state university where a comparison of single-stage and two-stage dry-hopping regimes was done, it was inferred that greater hop aroma potential in a beer can be achieved by multiple, low-dose dry hop additions as opposed to single additions at higher rates. The former yielded higher aroma attributes and were preferred more over traditional beers.

Time and temperature play an important role in the brewing process. Depending on when the hops are added, the right combinations of aromas and flavors are yielded.

In dry-hopping, since the hops aren’t boiled off, the brewer can get as much flavor possible into the final beer. Some commercial beers that are dry-hopped include Youngs Special Ale, Anchor Liberty, and Sam Adams Pale Ale.

The only thing dry-hopping doesn’t add to the beer is bitterness. To acquire bitterness, the brewer needs to add hops before the wort is boiled. But in dry-hopping, the process is the opposite. While dry-hopping gives an explosion of flavors, it lacks the beer of a subtle bitterness, which many consumers do not prefer.

– Which Hops To Use in a Dry-hopped Beer: Hops for Double Dry-hopping 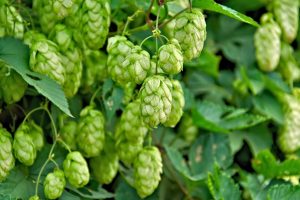 An important part of dry-hopping is to select the type of hops. It is best to use a hop variety that has flavor or aroma. Some other varieties include Willamette, Cascade, Crystal, Hallertau, and Tettnanger. One of the best parts of homebrewing is the scope for experimenting. There is no fixed recipe, and there is ample time to explore different combinations. Some homebrewers also prefer Centennial and Chinook.

– When Is It Best To Dry Hop? The Timing Matters

Once the hop variety is decided, you need to decide on the time it needs to be added, either in the primary or the secondary fermenter or in the keg. The secondary fermenter is the best place to add dry-hopping, according to experts. Being said so, because the beer is fermented and the CO2 conversion is almost done too. Which means the aromas of the hops won’t be scrubbed off.

The other option of dry-hopping is in the keg. Here it is advised to use a muslin cloth to avoid clogging of hops into the glass.

– What Form Should the Hops Be Used In?

The choice has been made, the time of addition has been decided. Now you need to decide what form the hops to use in. The options are pellets, plugs, or loose. Plugs are primarily used for dry-hopping. Loose hops are easy to stuff through a carboy neck but need to be weighed. Pellet hops are the easiest to use, they are easily transferable and can be bagged.

– What Hop Quantity Can You Use?

A normal measurement for dry-hopping is 28-56 grams for a five-gallon batch. The quantity depends entirely on your goal for the beer. If you want a slight hop aroma, 14 grams should be enough. If you want a pungent flavor, then maybe over 100 grams. If your hop has higher essential oil content, you may want to use a small quantity of it to avoid excess aroma. Because let’s face it, too much is too bad sometimes.

My advice is to simply experiment a few times first and decide what works best for you.

In this section, discover what are the most common techniques to perform dry-hopping!

This technique isn’t the ideal method, but it is a quick way to determine the aroma of the beer. Take a pale ale and add some pellet hops in your French press. Press the plunger and pour the beer. You should get a good idea of what these hops will contribute to the final brew.

Hops are added to a tea strainer or a hop bag and put into the keg.

This is a device that hooks to your tap line. You can push beer directly through the sample of hops. The beer comes in direct contact with the hops and gathers subtle aromas on its way.

A pale ale is traditionally a single malt single hop beer. But there is some distinctness in a double-hopped pale ale. For starters, it looks yellowish, with a creamy head and excellent lacing.  The smell varies from being a juicy blend of mango, peach, pineapple, and spruce alongside sweet breadiness. The taste swings between mango and pineapple, with a herbal green character, soft bitterness, and little malt character. Overall, most people experience an incredible drinking mouthfeel of the double dry-hopped pale ale. 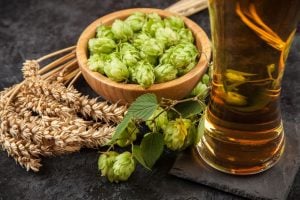 To sum it all up, double dry-hopping simply means using twice as many hops as you would normally use for a beer.

Double dry-hopping is a debatable topic. Many even believe it is a marketing gimmick to increase sales. What I believe is the science that goes behind the technique. I would encourage you to ramp up your brew the next time you are experimenting in your house and side with what suits you the best.