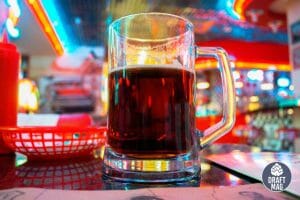 Bass Ale is an important keg in the history of English beers. If you are looking for a centuries-old ale that is edgy, delicious and lives up to its name to this day, then the search ends for you here. As you read this expert-curated review, find out why Bass Ale is considered one of the best and is available worldwide, even in your local pub.

Here is a complete review of the characteristics that make Bass Ale the great brew that it is.

An ancient recipe produces a proper English Pale Ale which has the appearance of a chestnut brown body with a distinctive cream-colored head. A delight to the eyes, this smooth ale slips down the glass and pours like a dream.

The first thing that hits you is the sweet aroma that hints at caramel, mostly with a bit of raisin and dried fruits. A light hoppy and floral aroma prepares your senses for the upcoming sip.

The moment you take a sip, a slight sweetness hits the tip of your palate, and you feel the weight of the full-bodied Bass Pale Ale. Smooth as butter, the sweetness of the pale ale slowly gets mingled with the fruity flavor, creating a truly refreshing mouthfeel. The refreshing feel is what makes this ale so easy to drink. The Bass Ale ABV stands at 5.1 percent.

Consistently balanced flavor is what continues throughout when you taste the ale for the first time. A sweetness that is well balanced with a light hoppy flavor makes for that delicious taste which is why this ale is so well known. The clean malty flavor profile is accompanied by a hint of fruity and floral notes that make drinking this ale a pleasurable activity.

A classic English pale ale is best paired with cheese that is aged well and gamey meat for that well-rounded experience. Ale is easily paired with most lunch and dinner items to provide that rich, indulging meal you are always looking forward to.

Poultry and game meat: Food items that include any kind of meat and poultry pair extremely well with ale. There are numerous dishes that can be included on the menu, including burgers, chicken wings, spicy fried chicken, Mexican food dishes, Asian dishes, any kinds of fried food, pizza, steaks, dishes containing nuts, etc. Be assured that the ale will elevate your dinner and lunch so that you enjoy every bit of your meal.

Hard aged cheese: Ale pairs excellently with cheese that is hard aged like Parmesan, Manchego, Asiago, Cotija, and many more. The salty cheese complements the malty flavor of the ale like a match made in heaven.

Usually, a classic English pale ale is something you can count on to match almost any flavor profile. However, since the ale is a bit sweet, spicy and salty foods pair with it the best, thereby rendering a very well-balanced meal.

Bass Ale is a typical English Pale ale brewed strictly as per the centuries-old original recipe developed by the Bass Brewery since its foundation in 1777. This ale soon developed its classic recipe that stays intact to this day. The main ingredients that help develop the rich, delicious flavor are imparted by selected malts, aromatic hops, and water.

The quality of the water used in brewing this fine ale must be the best. There are certain standards that are maintained while selecting water for this English pale ale. Since water makes up most of the body of the ale, it is important to select only the specified water for the process.

The water selected has to be rich in essential salts and the mineral percentage needs to be quite high. This is because the water helps in controlling the flavor profile, making it bitter or sweeter as per choice. Also, the water renders the smoothness of this full-bodied ale, allowing it to be consumed quite easily.

There are certain standards when it comes to selecting the best water.

Bass Ale uses two strains of yeast that have been traditionally used in brewing fine ale. The strains are used to impart a nutty and complex flavor to the ale with a characteristic chestnut brown hue. Ale style of beer requires top fermentation and the yeast commonly used for that is Saccharomyces cerevisiae, also known as Ale Yeast. This yeast dates to almost 3000 years and, in all probability, is the first yeast to be used for the process of fermentation.

Top fermentation is basically the rising up of the yeast used by consuming the sugars present, producing alcohol and carbonation. The temperatures required for the top fermentation process are usually hotter compared to bottom fermentation requiring lager beer. The preferred temperatures are between 50-70 degrees Fahrenheit.

Ale yeasts are quite common as it produces huge beer styles, one of which is the classic English pale ale category. Fermentation gives rise to a clear and crisp ale that is a pleasure to drink.

Hops is responsible for imparting the dry and bitter aftertaste of Bass Ale that lingers on along with the fruity and floral flavors. The female hops plant produces flowers that are conical in shape and gives the ale its characteristic taste. The main thing responsible are the acids and oils present in the hop flowers, or else the beer would taste too sweet because of the malt.

Mostly added in the boiling stage, hops are a major component of all beers, particularly full-bodied English ales. Hops provide the following characteristics to Bass Ale:

Also known as Brewer’s preferred grain, Barley Malt is barley that has been soaked long enough in the water to germinate. The reason behind this is to develop enough starch required for fermentation. Although a less celebrated step in brewing, malting is one of the most important.

Pale ale such as Bass Ale requires subjecting the barley grains to low temperatures. Temperature decides the color the ale takes once the fermentation process is complete. The natural sugars formed help impart the following attributes to this full-bodied pale ale.

Want to know how Bass Ale gets its characteristic color? Also known as adjunct grains, corn is added along with barley grains for the malting process. The addition of corn makes the ale lighter in color.

Bass Ale gets its characteristic light chestnut brown color by the addition of corn along with barley malt. Apart from imparting its characteristic color, corn is also used to add a sweet smoothness to the ale and add some lightness to heavy-bodied English ales.

It is estimated that a serving of 500 milliliters of original Bass Ale contains:

Founded in 1777 by William Bass in Staffordshire, England, Bass Brewery soon became a one of its kind English brewery. In particular, it gained substantial laurels for producing the premier British Bass Pale Ale. Within a century, Bass Brewery added more stars with the title of the largest brewery in the world, easily producing over a million barrels of beer. Exports started soon after under the “signature red triangle,” the first trademark to be filed under The Trade Mark Registration Act of 1875 of the United Kingdom.

In the 19th century, the Bass brewery was exporting its product all over the world through the port city of Hull. And even though times have changed significantly, Bass Ale is still enjoyed by beer connoisseurs worldwide.

The 20th Century was a difficult time for the beer industry. Even then, Bass managed to be featured as one of the original FT30 companies on the London Stock Exchange due to its widespread popularity and business proliferation. The brewery didn’t face any Bass beer shortage. Over the next five decades, they managed to sustain their market dominance in the UK and could even buy out several British breweries.

Things changed substantially by the 21st Century, as out of many, only Bass and one other brewery survived. Changing times led to change in ideas and Bass Breweries was sold to a Belgian Brewery called Interbrew, which later came to be known as Anheuser-Busch InBev in June 2000.

The original Bass Pale Ale remains a brew of the Interbrew breweries, even though many other beer types were lost to another brewery. Although it passed hands, this typical English pale ale has remained true to its original form.

To this day, Bass Ale has managed to retain the same signature edge, thanks to the preservation of the original recipe which is still followed religiously. A winner of the gold medal in the Ale category of the Brewing Industry International Awards in 1987, Bass Ale has continued to win hearts worldwide with its signature flavor and smooth mouthfeel.

An ale for everyone, Bass Ale is well-balanced in taste and as smooth as it gets, a fine ale that is luxurious in mouthfeel, and one of the best-known English Pale Ales. If you are wondering “Where can I buy Bass Ale”, the Bass ale website is your best bet for authentic cans and bottles.

The best thing about Bass Ale is that it is easily found all over the world, even right at your local pub. Thus, if you want a taste of this historic ale, visit your nearest pub today!