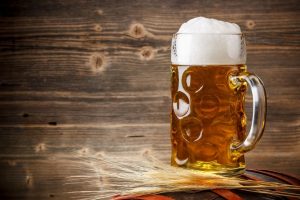 Our Rolling Rock Review investigates the taste, type, and facts about the American lager. The beer started successfully as a high-end brew for the working class in the late 1940s but soon went rolling through many changes in companies.

The easily drinkable beer has changed over the years and we are here to review what it tastes like now and whether you should consider trying a Rolling Rock beer or not.

What Is Rolling Rock?

Rolling Rock extra pale is an American lager-adjunct pale beer. The Rolling Rock alcohol content is low at 4.4 percent. The light beer forms a fine white head when poured into a beer glass. The first brewery of the Rolling Rock beer was located in Latrobe, Pennsylvania that was established as a family-owned business in 1939.

At present, the beer is manufactured by the giant beer company Anheuser-Busch InBev. With a blend of hops and the finest malted barley, the beer has a very distinctive taste and is light on the tongue. Rolling Rock is available in glass bottles of (12 oz.) and small cans (7 oz.). The remarkable green painted bottles make the beer stand out from typical brown or black beer glass bottles.

What Are the Ingredients in Rolling Rock?

In this section, you will discover the true flavors of Rolling Rock, and you’ll learn to appreciate its looks!

The beer has a light hops aroma that feels pleasant. The flavors feel very light on the tongue, almost ethereal. The sweetness is evident with each sip while the bitterness from hop characters is lacking. This carbonated beer has a slight hop tang to it but mostly tastes like sweetened soft water.

Apart from the iconic green bottle packaging, the Rolling Rock has a pale straw color when poured into a beer glass. It ends with a fine white foam head. The texture looks very light and almost transparent which explains the watery flavor of the beer. The beer gets a golden yellow color from brewing it at a low temperature.

The brewing technique is an ancient one that provides the beer its unique taste and color.

Rolling Rock extra pale has a moderate calorie count, so health-conscious consumers can hardly find better alternatives. The Rolling Rock alcohol content is at 4.4 percent, which is quite low compared to other regular beers and makes it easy to drink more than one bottle.

A 12 fl oz bottle of the beer contains:

The alcohol percentage in PBR is a little higher than the Rolling Rock but still comparable. Overall, both the beers are easy to drink but PBR has a taste personality and sweetness that Rolling Rock doesn’t.

Here’s a side by side comparison of Rolling Rock Extra Pale and Pabst Blue Ribbon:

Rolling Rock Review on the Internet 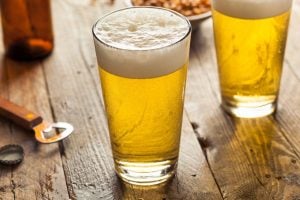 The majority of reviewers on the internet have mentioned how the original taste of the Rolling Rock is very different from what is manufactured and available in the market at present. The light lager beer once tasted unique and different from the average American lager but after it had been acquired by Anheuser-Busch InBev, the flavor and personality no longer exist.

Many drinkers suggest that the lightness of the Rolling Rock Extra Pale beer makes it easy and almost necessary to grab more drinks in order to feel the taste. As more bottles get finished easily, the brand also benefits from more sales. However, the drastic change in taste in the general public has made the Rolling Rock Extra Pale beer gradually lose its popularity among consumers and get criticized.

What Does 33 Mean on Rolling Rock Beer?

The Rolling Rock and the number 33 mystery is an interesting one. Most people on the internet have come up with their own theories related to the number 33 that is written on each bottle of Rolling Rock beer. The former CEO of Latrobe Brewing suggested how the number 33 could refer to the word count of the beer’s original pledge of quality but the exact reason is still unknown.

The official website of Rolling Rock states the different theories that people came up with:

Does Rolling Rock Get You Drunk?

Getting drunk by drinking Rolling Rock beer will require time and too many bottles. Since the alcohol content in the beer is limited to only 4.4 percent, quite low compared to most lagers, and for easy drinking, you’d need to drink many bottles to get drunk.

What Beer Is Comparable To Rolling Rock?

There are plenty of light lager beers available in the market that are comparable to the Rolling Rock Extra Pale, including popular options like Bud Light, Coors Light, Miller Lite, and Keystone.

Where Is Rolling Rock Beer Manufactured?

Since Anheuser-Busch InBev took over the beer brand in 2006, the Rolling Rock brewery is currently located in Newark, New Jersey.

The Rolling Rock is a better and healthy option for health-conscious drinkers as it contains low alcohol that translates into low calories as well. Despite the fact that Rolling Rock’s flavor profile can be disappointing to some, the good side of the sweetened water-like beer is its easy-drinking characteristics with a refreshing taste. Other variants of the Rolling Rock may not offer the same health benefits. 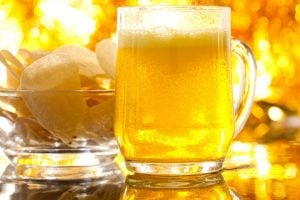 For consumers who need a refreshing, light, and sweet beer to sip on a sunny day or while spending time with friends, the Rocking Roll fits right into those moments with its low alcohol percentage, calories, and taste profile. The original taste of the Rolling Rock Extra Pale beer may not be present in new brewing but it is still a refreshing and easy drink for all.