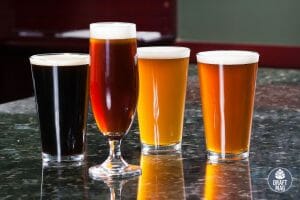 Best Australian beers include everything from commercially produced lagers to specially hand-crafted beers. The Sunshine State is home to some of the hidden gems in the beer industry. Australian love for beer makes them one of the leading beer consumers in the world. Here are the top Australian beer brands that are passionately consumed nationwide.

Here is the list of the best Australian beers you can try when out and about in the country down under!

Coopers Brewery Original Pale tops the chart of the best Australian beers due to several reasons. It is one of the cheapest and most refreshing beers in Australia.  The beer pours golden and hazy in a glass with a generous foam layer. According to Cooper Brewery, their traditional brewing method is the reason behind the distinctive and fine cloudy appearance of their beers.

Original Pale Ale showcases a well-balanced malt and floral aroma. You can notice malt sweetness with little fruit and floral notes. A mild bitterness lingers through the end, but it is not too intense to bother you. This beer is free from preservatives and additives.

Coopers Original Pale Ale is available in a 375 milliliter can, 750 milliliter bottle and 440 milliliters limited edition can.

Popularly known as VB in Australia, Victoria Bitter is one of Australia’s best-selling beers. Brewed by Carlton & United Breweries, Ltd., this beer has become a staple drink of Aussies to beat a hot sunny day. It pours clear, orange-golden in a glass. You can notice a thin head due to carbonation, but there is no foaming.

This full-flavored beer is naturally bitter with subtle malty and grassy notes — thanks to iconic “Pride of Ringwood” hops from Victoria and Tasmania. Despite noticeable bitterness, it is a smooth, crisp, and highly refreshing beer. Such a feature makes it a suitable beverage for the harsh Australian climate. It is available in both cans and bottles of 375 milliliters.

James Boag’s Premium Lager is one of the most popular Australian beers, both locally and internationally. This smooth and subtle lager strikes a perfect balance between malt and hop. Established in 1881, the rich heritage, world-class brewing skills, and magic of pure Tasmanian water reflects in every can of James Boag’s premium lager.

The beer pours bright pale straw in a glass, and is a full-bodied beer with a fruity front palate. The dry and crisp finish will leave you wanting another sip. Overall, it is a perfectly balanced Australian premium lager. Interestingly, the brewery claims that Premium lager is 99.9 percent sugar-free on average.

Carlton Draught is widely marketed as brewery-fresh beer. This refreshing, full-flavored lager features in the top three best Australian beers. Almost every brewery in Victoria and popular breweries across the nation serve this beer on tap.

This beer is clear, dark-golden in color, with a thick head that shows low retention. It is neither hop nor malt-forward beer. Instead, it is a perfectly balanced, light lager that showcases light bitterness with a pleasant fruity aroma. The finish is crisp and dry.

All such premium features come at a very reasonable price. Carlton Draught is available in 375 milliliter cans and bottles, 750 milliliter bottles, as well as on draught throughout Australia.

Little Creatures is credited with introducing the Pale Ale style to Australia. Over time, it has established itself as one of the most loved Pale Ale in the country thanks to the dedicated use of imported American Variety hops (Cascade and Chinook) and specialty malts (Pale, Caramel, and Munich).

It is a hop-driven beer that bursts with bright flavors and aroma. Malt sweetness with crisp grapefruit or passionfruit notes comes first, followed by a delicate bitterness that lingers through the end. Overall, this full-bodied beer is highly refreshing and crisp. Additionally, this beer is free from additives and preservatives.

First brewed in 1991, this mid-strength lager from Queensland is highly adored nationwide.  While it is one of the best-selling beers in Australia, there is no international distributor of this beer. This beer uses Gloden cluster hops, the finest Australian malts, and the brewery’s trademark yeast.

As a result, this beer has a well-balanced, smooth flavor and body. It is bright, sunny, and golden in color both inside and outside. The tasting notes include the delicate bitterness of hops with a backbone of malt sweetness. Overall, it is a very light and highly refreshing lager beer.

XXXX Gold is available in both bottles and cans of 375 milliliters. 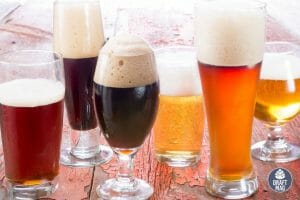 Founded in 1860, Toohey Brewery still produces some of the finest brews in Sydney. Tooheys Old Ale is the first and the oldest beer in the brewery. This old-fashioned, dark mild ale is surprisingly refreshing. Over the years, it has replaced the English ales in Australia.

Old Ale pours very dark brown with a thick, foamy white head. It showcases a rich malt profile with subtle notes of coffee and chocolate. Some may notice a fruity aroma with subtle caramel notes.

Hahn Super Dry is another refreshing and low-carb beer loved by Australians. The main reason for this drink brewed by Hahn Brewing Co. Pvt. Ltd. is its unmistakable crisp and dry taste. Moreover, it is 99.9 percent sugar-free beer with no added preservatives. With a low-calorie count of 99, it is preferred by health watchers.

This beer pours clear, golden yellow in a glass with a thick white head that leaves behind good lacing. Like typical Australian lagers, this beer also showcases very light hop aromas with subtle malt sweetness. Overall, this well-balanced beer is highly refreshing and ends with a crisp finish.

Hahn Super Dry is available in both 375 milliliter cans and 330-milliliter bottles.

Foster’s Lager is a commercially produced, world-renowned Australian beer. It has several production units located in different countries. Although not loved by Aussies as much as other beers on this list, this beer is popular in the UK and US due to its clean taste.

Brewed by Foster Group Limited, the color of this beer is bright golden. It shows good carbonation with a medium foamy head. Both malt and hop aroma and flavor are not too prominent, but grainy, malt sweetness can be felt with hints of hop bitterness. The finish is clean, crisp, and dry.

Foster’s Lager is widely available in 375 milliliter bottles and cans.

Malt sweetness dominates the front palate, which ends in a pleasantly bitter, refreshing, and dry finish. It is available in both 375 milliliter bottles and cans.

Brewed by BentSpoke Brewing Company, this cranking IPA shines like a bright orange both in terms of color and flavor. It showcases the bright aroma and flavor of American-variety hops — Centennial, Citra, Cascade, and Simcoe.

The nose is full of citrusy (orange) aroma with hints of resinous pine. The perfectly balanced caramel malts build a smooth profile that ends with a delicious bitterness.

This award-winning craft beer from Balter Brewing Company is big, bold, and fully hopped. It bursts with tropical, floral aroma and flavor that hits the taste buds in the right pleasure zone. Although a hop-forward beer, it is not overwhelmingly bitter. It is a well-balanced, easy-to-drink beer.

Brewed by Your Mates Brewing Company, this beer ranked 3rd in Australia in the 2021 GABS Hottest 100. This light to medium-bodied fruity and highly drinkable pale ale is a beach favorite. The aromatics of passionfruit, mango, and pineapple build the fruity palate. Overall, it is refreshing and easy to drink craft beer.

Originally crafted to compete in Awards shows, G.O.A.T. became a favorite among beer lovers. Its signature opaque appearance paired with bursting juicy flavors makes it a chart-topper. The extra haziness and aromatics result from the late addition of El Dorado, Mosaic, and Amarillo hops.

Brewed by Capital Brewing Co., it is another popular beer that is refreshing, easy to drink, and extra pale with maximum flavors. It is brewed from premium quality hops, namely Azzaca and Amarillo hops. It makes the palate burst with powerful and fragrant stone and tropical fruits. Additionally, it is lighter on the palate with no compromise on flavors with light malt.

This is a hop-driven beer from Ballistic Beer Co loaded with flavors, making it extremely refreshing and easy to drink. Bright tropical fruits, namely mango, pineapple, and passionfruit, offer fruity characteristics and aromas. Overall, it is a well-balanced beer with low bitterness.

Brewed by Capital Brewing Co., this is a highly sessionable and clean beer. It is brewed from Saaz and Hallertau (European noble hop varieties) and New Zealand’s Dr. Rudi. It showcases a perfect blend of underlying spiciness with some floral and piney notes. The malt gives it a rich sweetness which is perfectly balanced by the clean finish and light bitterness.

Australian beers are known for their delicious taste, variety, and value for money, and this review featured some of the top beers in Australia. According to trends and as evident from our review, Aussies are in love with premium lagers and Pale Ales, so here are some key takeaways from this review: 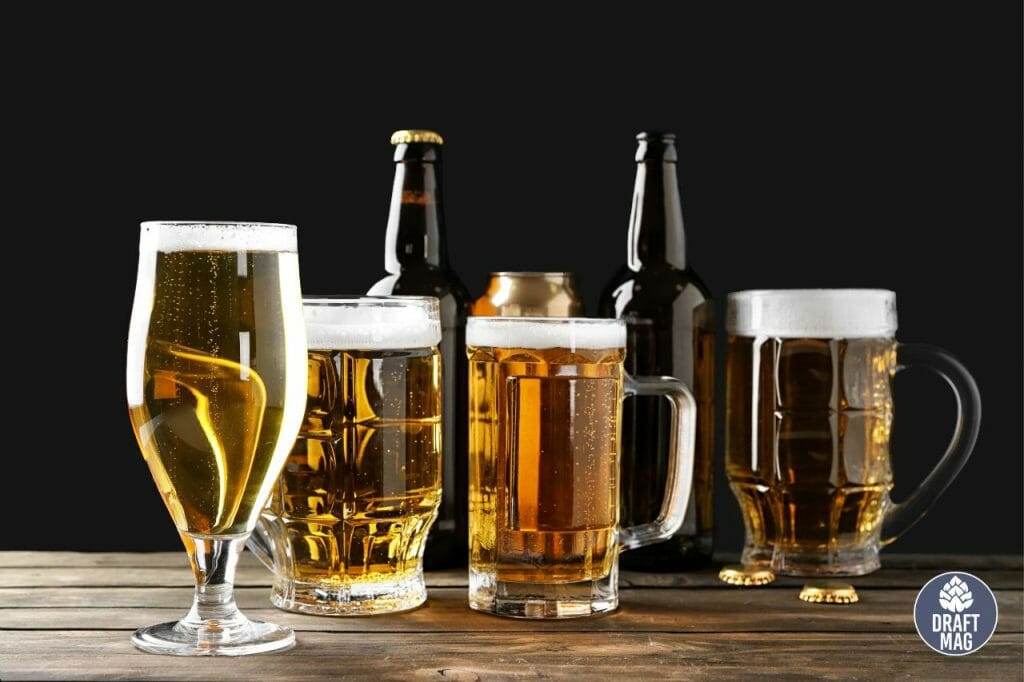 Aussies are avid beer drinkers, so accordingly, the top Australian beers are brewed to suit different palates, the sunny Australian climate, and health watchers. Pick one or two pints from our list and experience the freshness of Australian beers yourself!