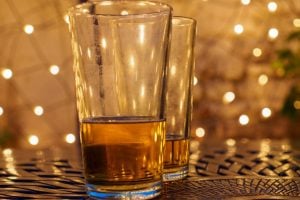 No one should have to suffer through the bitter, heavy and boring taste of flat beer.  However, there’s good news; you can turn the beer around into something delicious. This guide focuses on what to do if your beer tastes flat, how to avoid it, and how to recarbonate it.

Here are some of the flat beer questions we’ll answer:

What Is a Flat Beer? Does It Contain Less Alcohol?

Flat beer is a type of beer that is non carbonated or otherwise conditioned. It has the same amount of alcohol as normal beers, but is lighter in taste and can be consumed without carbonation. Flattened beer is usually served with no head and has little or no carbon dioxide in it. It can also be referred to as an uncarbonated beer.

When Can You Conclude That a Beer Is Flat? Haunch or Evidence

Beer is said to be flat when there’s not enough carbon dioxide (CO2) in it. CO2 leaves the beer when it is stored in warm places or under hot conditions. Sometimes it can happen after a short period, but the most common cause is when the beer has been in warm storage for too long.

When a beer is said to be flat, it no longer has gas in it. The CO2 that sustains the bubbles can escape through the opening up of tiny holes that are created during fermentation processes. To identify whether your beer is flat or not, look for these signs:

What Does an Uncarbonated Beer Taste Like? Sour, Heavy, or Both?

While most beer lovers hate drinking uncarbonated beer due to its flattened taste, some beer lovers prefer drinking uncarbonated beer because it tastes different from the usual sparkling drinks. It has a subtle bitterness that lingers on your tongue for a good while after the drink is finished. Carbonation makes the beer bubbly and light, and sometimes it is so fizzy that you can’t taste it in full. This is however not the case when you enjoy a beer with no carbonation.

How To Keep The Beer From Going Flat: Its Causes and How To Avoid It

Beer, both home brewed and bottled, can lose its carbonation and go flat, even during production. Here are some common causes:

How To Carbonate a Home Brewed Beer in A Keg: The Two Fastest Ways

Before carbonating your beer in a keg, ensure you have the following equipment:

The force carbonation process utilizes pressurized CO2 gotten from the gas cylinder. To carbonate the beer, simply set the keg of beer at a cold temperature. The low temperature lets the carbon dioxide efficiently diffuse into the beer.

After setting the temperature and the carbonation rate, set the CO2 regulator to the pressure as the temperature. Your beer will carbonate within five to ten days instead of two to four weeks.

– Method 2. Adding PSI Into the Keg of Beer

For a faster result than the force carbonation method, you can simply add thirty to forty carbon dioxide PSI in the cold keg. Next, thoroughly rock or shake the keg to make it diffuse faster. Carbonation process lasts within 12 hours to three days depending on how much you shake the keg and how cold the temperature is.

After successfully carbonating the beer, reduce the CO2 regulator pressure to the serving point to release excess CO2. Make sure you leave the beer for one hour before consuming it.

How To Carbonate Beer in a Bottle: Two Foolproof Methods 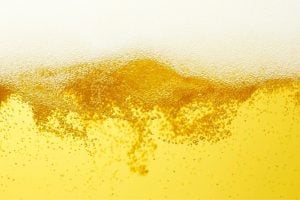 If you’ve bought your beer in bottles, all hope is not lost. Here are some surefire ways to recarbonate bottled beer:

The first method is by adding priming or fermenting sugar in your beer with these simple steps to fix flat beer in a bottle. First empty the bottle of its contents and clean up the bottle. Next, place about two tablespoons of sugar in the bottom of the bottle and shake it up well before refilling with beer.

Replace the cap on your bottle and then rinse it with hot water to cool down its temperature (this makes sure that condensations don’t form in the bottle).

The second method can be achieved by shaking or rolling your beer bottle. This will work if your beer is cold enough and if you are patient enough. If it doesn’t work, try using warm water or hot tap water to heat the CO2 bubbles within your beer before shaking them again.

What Makes a Carbonated Beer Different From an Uncarbonated One?

Beer is a fermented beverage, and it goes through a process called carbonation to make it fizzy and bubbly. When yeast fermentation takes place, it produces ethanol and carbon dioxide as two of its byproducts. Carbon dioxide bubbles are then released into the headspace of the bottle or can and create pressure at this point.

Can a Glass of Flat Beer Make You Sick? Just a Myth?

Such belief stems from the fact that flat beers are not carbonated enough to cause bubbles in the drink. Since flat beer doesn’t contain gas, it can’t cause bubbles like other beverages. Drinking flat beer may taste dull in the mouth. Its dull taste may cause an uncomfortable feeling in the stomach.

Pros and Cons of Uncarbonated Beer 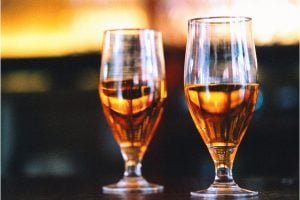 At this point, we’ve discussed flat or non-carbonated beer and how to carbonate beer  extensively. Here is a walkthrough of all that you have learned about flat beer.

Whether you are taking a home-brewed beer or a store-gotten beer, you may not like the taste of a flat beer. Thankfully, you can recarbonate your beer within a few seconds or minutes. All you need to do is follow the written instructions or recarbonate your beer. Get ready for a refreshing taste.