The German beer mug name is traditionally called a stein, but it has other names which may refer to the volume of beer that it can hold. Some of these mugs go as far back as the 14th Century at the height of the bubonic plague that ravished much of Europe, North Africa and Asia. 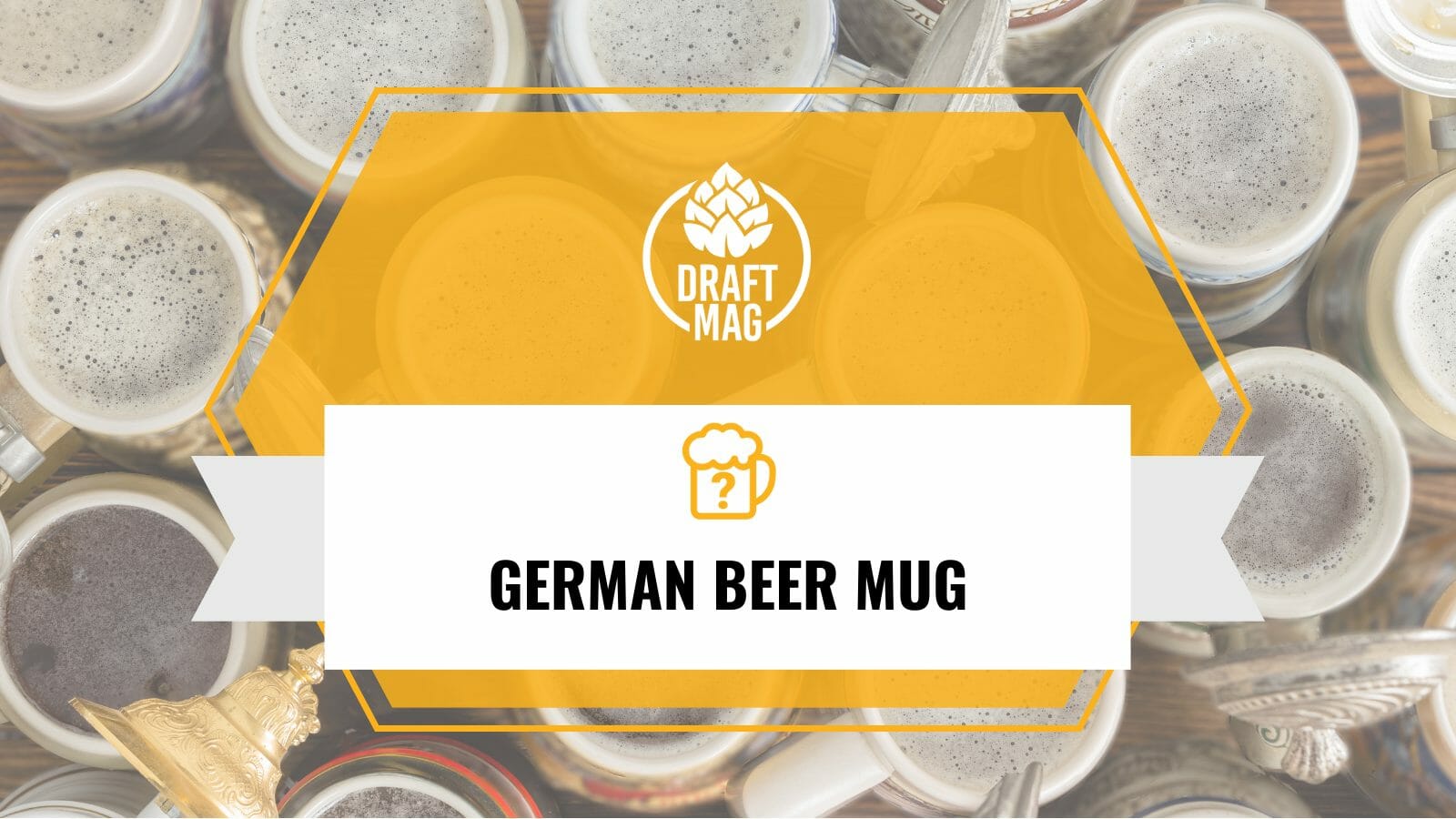 Today, it has become a souvenir or collectible that can be traded for other valuable items. This article will discuss a brief history of the mugs, their various names, types and the volumes of beer they can contain.

What Is the Name of the German Beer Mug?

The name of the German beer mug is generally referred to as a stein, which is the German word for stone. This is because the mugs used to be made of stoneware such as earthenware, ceramics, porcelain and creamware when it was first invented.

However, steins can also be made of different materials such as pewter, silver, crystals, glass or even wood.

– Pints in a Stein

How many pints a stein can hold depends on the beer stein size. For example, a typical ceramic beer stein mug should be able to hold 2 pints of beer. 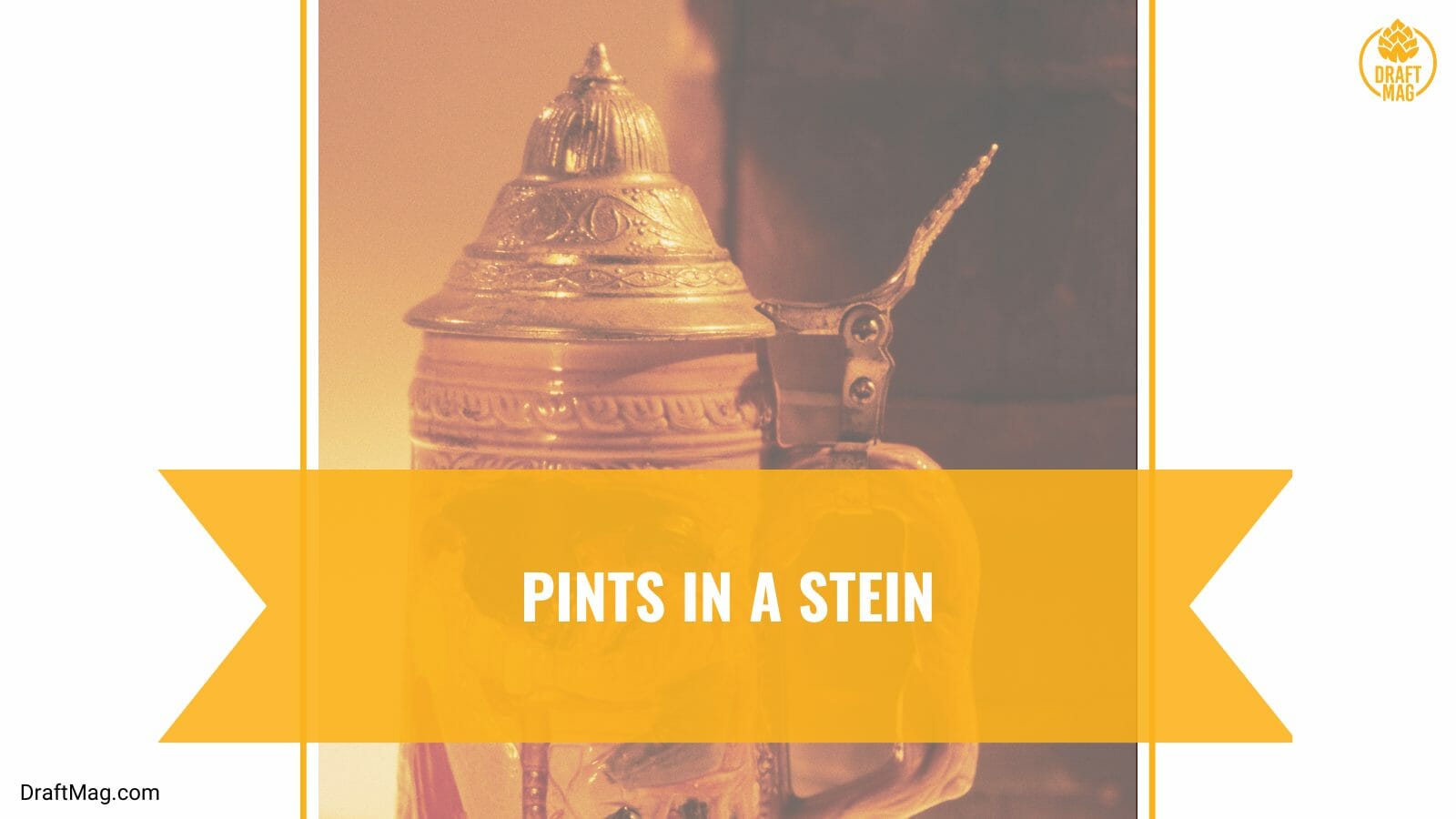 An Oktoberfest beer stein with a lid can also hold up to 2 pints. However, some Mettlach steins or stoneware German beer mugs can hold over 3 pints of alcohol.

Various regions in Germany refer to beer mugs with different names, though all of the names convey similar meanings. Here are a few ways of referring to German mugs:

– Difference Between German Mug and Stein

Interestingly, other sources maintain that there is a difference between German mugs and Steins. According to them the mugs, known in German as bierkrug, holds less beer than steins and are less robust with none to only a few designs. 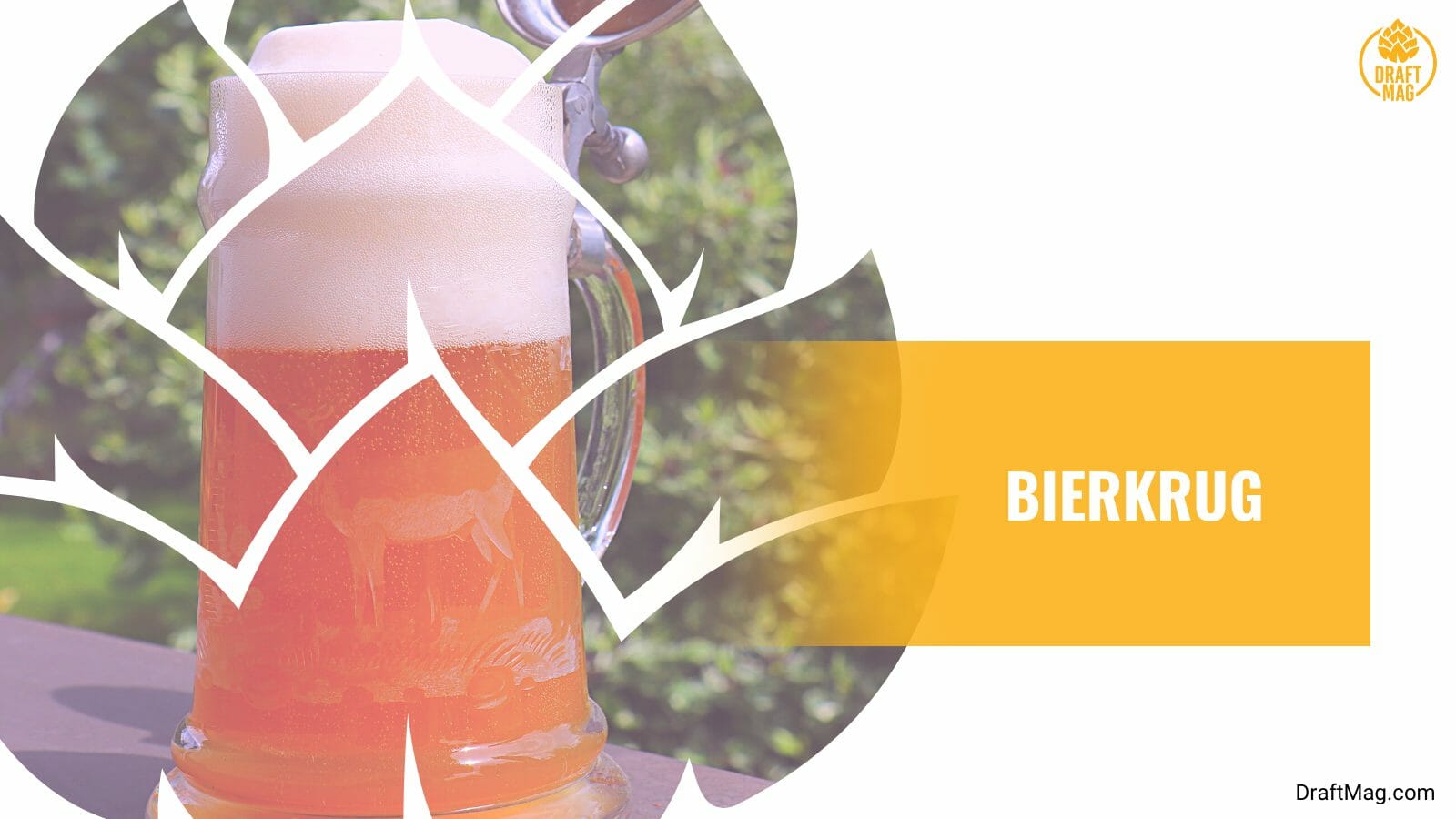 German Mugs can hold between 0.5 Liters to 1 Liter of beer. On the other hand, Steins also referred to as Oktoberfest steins are stronger, larger, have more intricate designs and can hold drinks between 0.25 and 2 Liters.

However, given that many sources believe German beer mugs are the same as beer steins, we will go with that. Thus, these words will be used interchangeably in the next paragraphs.

The popular story behind the production of lidded beer steins is that they were made during the Black Death with lids attached to prevent fleas from falling into the beers. According to them, the plague was spread by the fleas, thus covering the beers helped in curtailing the disease.

However, some sources doubt the veracity of this story because according to them, the belief in those days was that the plague spread through miasmas which were unpleasant aromas or vapors. Whatever the reason for making beer steins, one thing is for sure: beer steins became popular at the beginning of the Renaissance era.

At the time, steins were made of stoneware, hence their name which means stone. Scholars say that the first materials used in making these mugs were earthenware and wood. However, these materials were porous and couldn’t store beer for long. Also, they were difficult to clean and became putrid with prolonged use. 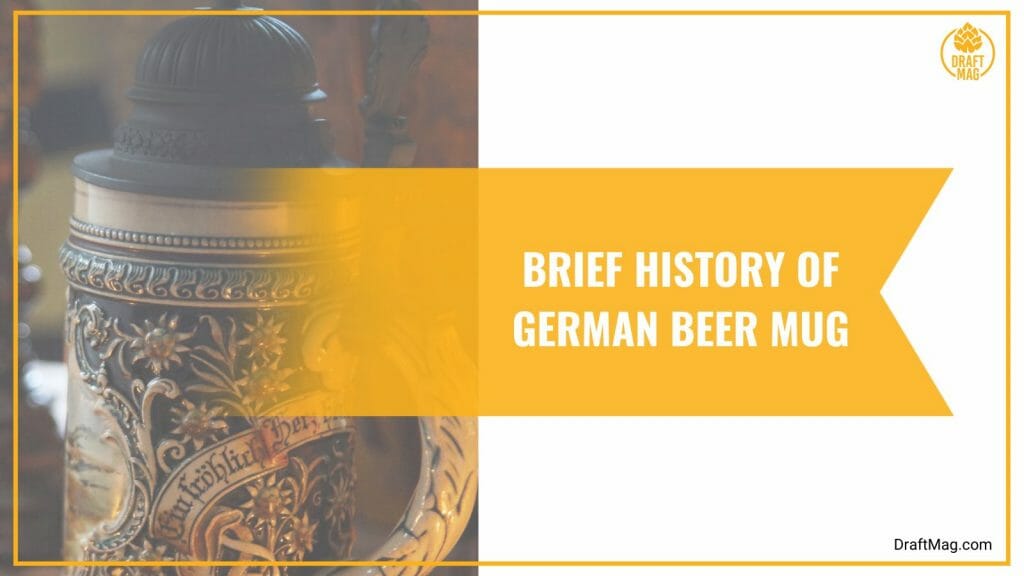 Soon, pewter was introduced to help with the problems posed by wood and earthenware, but there was a problem. It was expensive and came with pewter lids that only the rich could afford, thus the lower-class citizens of German society had to make do with clay and wood. As the years went by, other materials were used to make beer steins including ceramics, porcelain, glass and crystals. Today, German beer steins are mostly made of porcelain or ceramics and are still used to consume beer, especially during Oktoberfest.

These mugs that are used during Oktoberfest are called maßkrug and can hold up to 1 liter of beer. Humpen is another popular mug at Oktoberfest due to its size and strength, and this type of mug translates to “tankard” in English.

What Are the Kinds of German Beer Steins?

The different kinds of German beer steins include wooden/carved steins, regimental steins, ivory steins, Mettlach steins, glass-blown beer steins, and character steins. These are the various kinds of beer steins and each has its own unique characteristics that set it apart from others.

Interestingly, these steins are unique to certain periods and cultures. Here are some of the most prominent types:

These German mugs are carved from wood with complex hand painted designs that are reminiscent of the old Germanic people of Scandinavia. The large German beer steins usually feature detailed reliefs of battle scenes alongside sophisticated patterns that are enchanting. 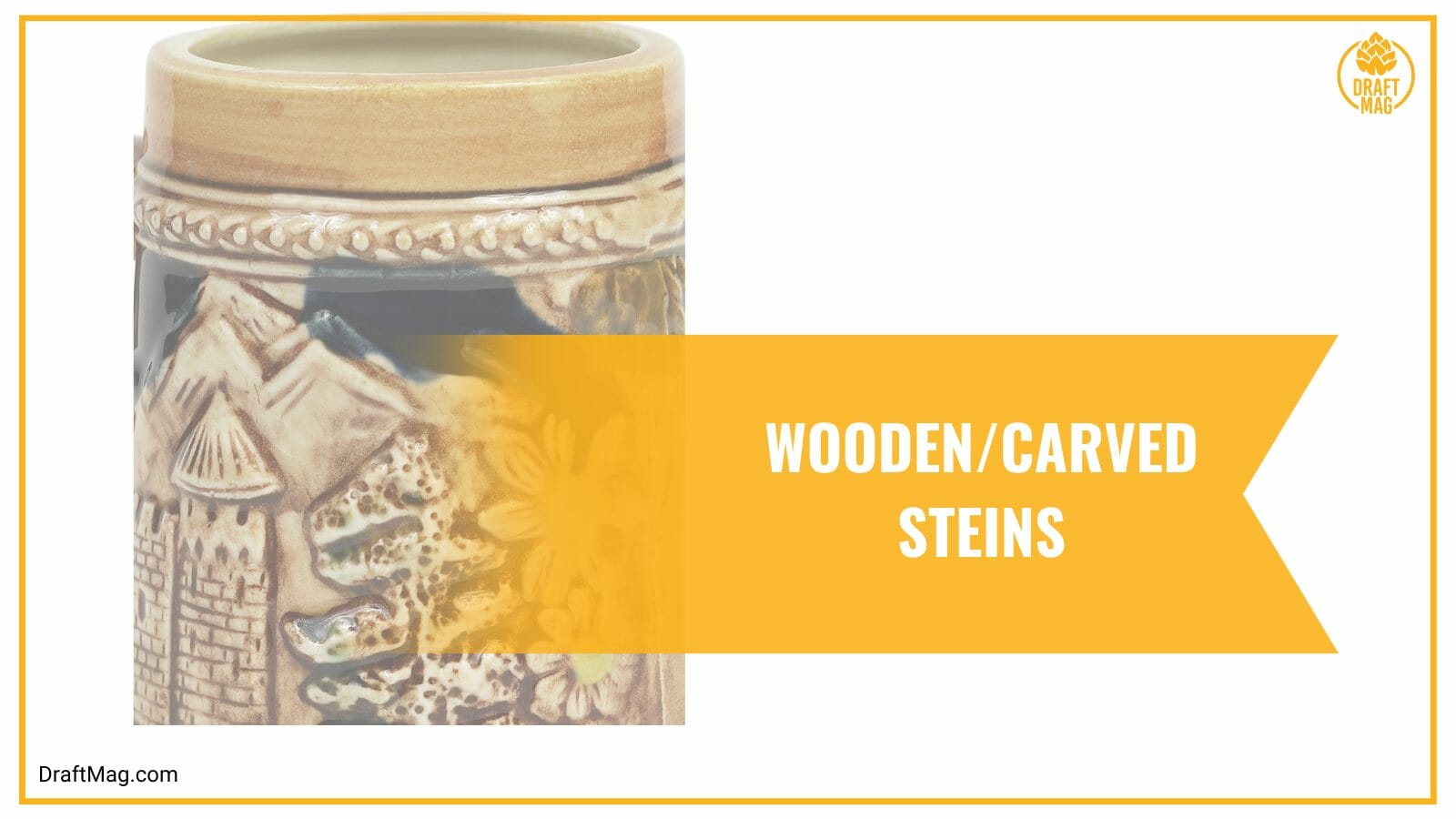 It took days and sometimes months to finish a carved stein, so they are quite expensive due to the painstaking process. However, others are made by machines that come at a cheaper price.

Regimental steins were used to commemorate events on the battlefield and were usually handed over to soldiers as a “thank you” gift in the German military. These steins were designed with the name of the soldier, their rank, and their accomplishments. The Germans started producing the regimental steins between 1890 and 1914 when young men around 18 to 21 years had to undergo military training. It was common, at the time, to purchase some memorabilia that would remind them of their time in training and members of their units.

Many soldiers preferred German beer steins because they had all the names of the soldiers in their unit written on them, hence the name “Regimental Steins.” These mugs are hand-crafted mostly from stone or earthenware and become a family property that is handed from one generation to the next. However, modern-day regimental steins are made from porcelain and by machines which are able to mimic vintage designs so well that it is difficult to differentiate them.

These steins were designed from ivory and are among the rarest beer mugs due to several laws banning the use of ivory. The material is derived from the tusks of elephants which are mostly hunted and killed for them.

A few surviving ivory steins feature intricate designs that are comparable to Greek and Roman sculptures. However, it is advisable to check the legal status of an ivory stein before using it, so you don’t fall foul of the law.

They are called Mettlach steins because they come from the municipality of Mettlach in the state of Saarland. The company famous for producing these German mugs is the Villeroy & Boch factory, which has been in business since the 19th Century.

For years it was at the forefront of producing distinctive beer mugs with inlay lids which became the standard for beer stein producers across Europe. Mettlach steins come in different sizes, designs, shapes and colors. 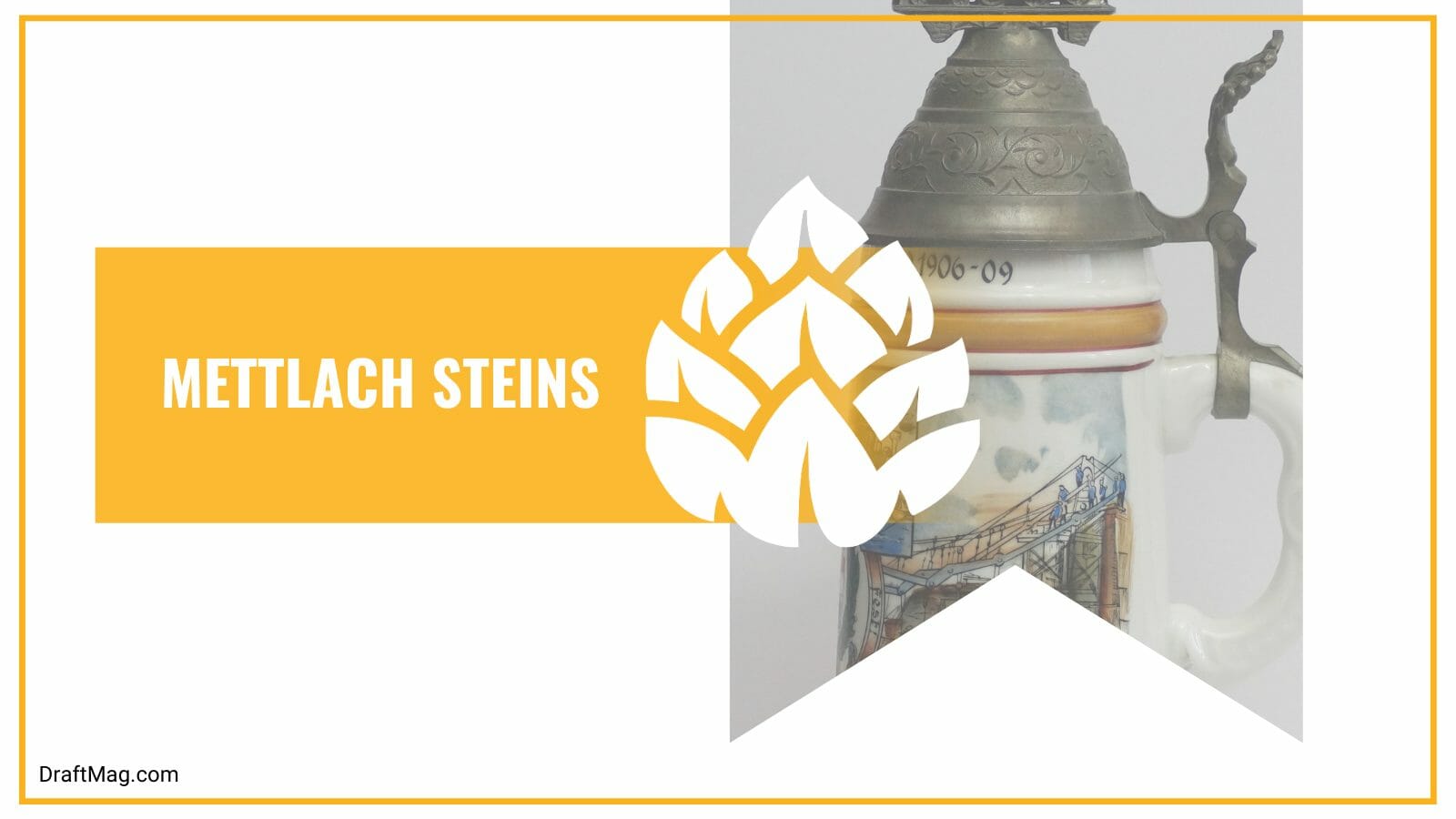 Many collectors like to keep a Mettlach Stein because they are well-marked and easily identifiable as well as have original designs and are marketable. They also play their original role, which is to keep beer fresh and tasty while the patrons take their time to enjoy each sip of a tasty ale.

The types of Mettlach steins include Hourglass, Tavern, Bavarian, Hofbrau, Chalice, Traditional, Potbelly, Smokestack, Barrel and Lodge. Mettlach Steins can store between 0.3 Liters to 7 Liters of beer and the largest Mettlach stands at a whopping 12 inches.

The famous beer boot is an example of a glass-blown stein. The beer boot tradition started in the military where recruits were made to drink about a liter of beer from real boots. Today, many people fancy drinking beers from beer boots just for fun or to keep the glass beer stein as a memento.

Character steins are mostly made from ceramics and porcelain and can be shaped into any character that the designer wants. These characters typically represent ideas, symbols, memories, or emotions and stein designers often use animals as their stein characters to convey these messages. For example, a fox stein will probably represent cunningness or trickery while a dog may represent loyalty. Character steins are among the most artistic German beer steins due to their vast array of shapes.

These German steins come in different sizes ranging from 8.5 inches to 12 inches and their volume is between 0.75 liters to 1.2 liters. They are perfect gifts for stein collectors or beer connoisseurs who love to drink from German mugs. Most collectors also prefer to use them as personalized beer steins.

We’ve looked at the various names and types of German beer mugs and the amount of alcohol each can hold. Here is a summary of all that we’ve read:

German beer steins are made of various materials including pewter, earthenware, and glass, and some even come with lids to keep flies and other contaminants out.