Draught beer, otherwise called draft beer, displays notable distinctiveness from other types of beer in terms of storage and serving mechanism. This craft beer is generally regarded as an ideal means of showcasing the splendor of brewing. 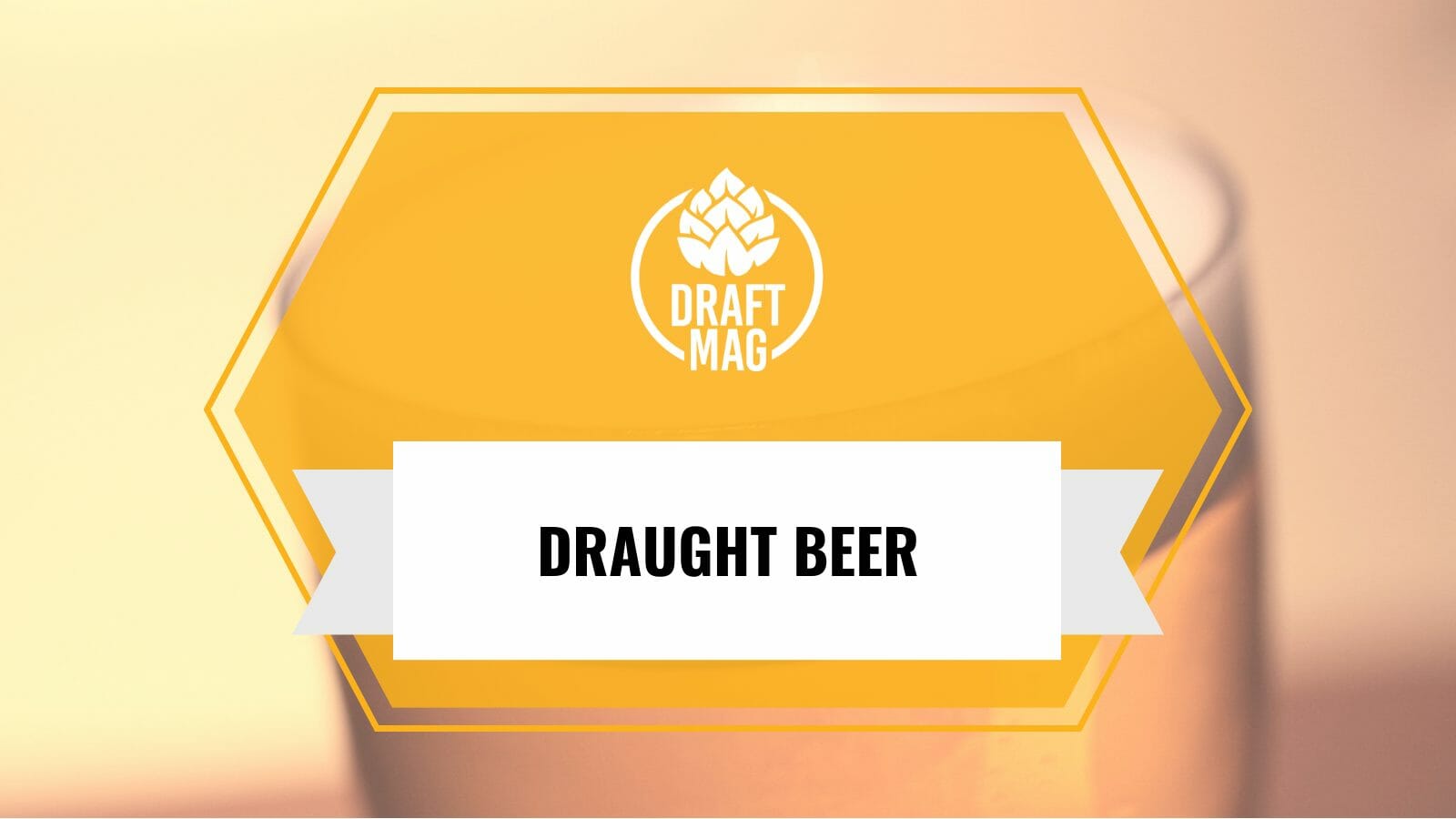 As a result, it has long been marked as one of the finest options for beer lovers due to its crisp taste and the enthralling foamy head that always invites drinking contemplations.

Grab a cold one and continue reading this complete guide as we examine everything you need to know about this unique brew.

What Does Draught Beer Mean?

Draught beer is a beer stored in kegs and served directly from taps through a pressurized mechanism. To a large extent, the term draught beer has stirred a lot of confusion because it applies to so many diverse beer storing and serving techniques in the brewing industry.

Historically, draught beer is stored and served from a traditional cask or large container. More recently, the terms refer to a specific beer style presented in bottles or cans, but historians generally oppose this application and consider it misleading.

In the early days, brewers carried and served beer from casks directly to customers. The term has evolved since, with draught now denoting a way of preparing and storing beer and serving and consuming it. Likewise, the term draught beer has drawn supporters and detractors for each beer-holding and serving concept or application. To crown all this, note that the most historically accurate definition of draught beer is served directly from a cask without pressurization and active yeast.

Several people often wonder if there are differences between draft beer and draught beer. The only difference we can tell you is the spelling of their words. 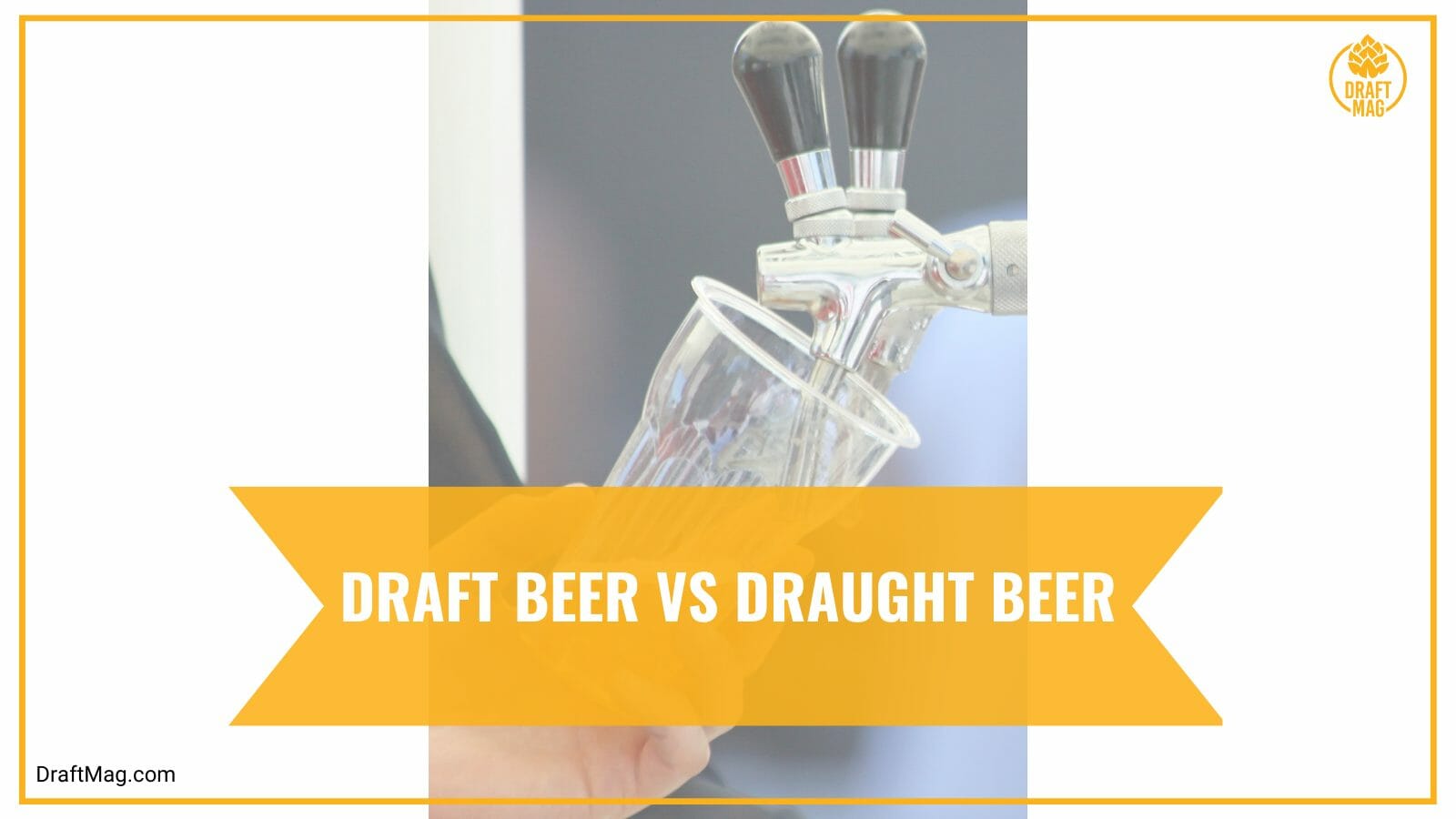 In other cases, drinkers expect canned or bottled beer tastes to resemble that of keg beer. This is because these bottled beers are often labeled as such even though they did not come directly from a keg, misleading most drinkers. Moreover, some bottled beers come with nitrogen inserts that cause carbonation after opening the bottle. That way, the bottled beer becomes smooth and pours with a thick head, somehow simulating the keg beer.

As the name suggests, keg beer is stored in stainless steel containers and undergoes filtration and pasteurization, which are not usually carried out with cask beer. More specifically, cask beer, also called real ale or cask-conditioned beer, is a beer that undergoes secondary fermentation in containers or barrels. 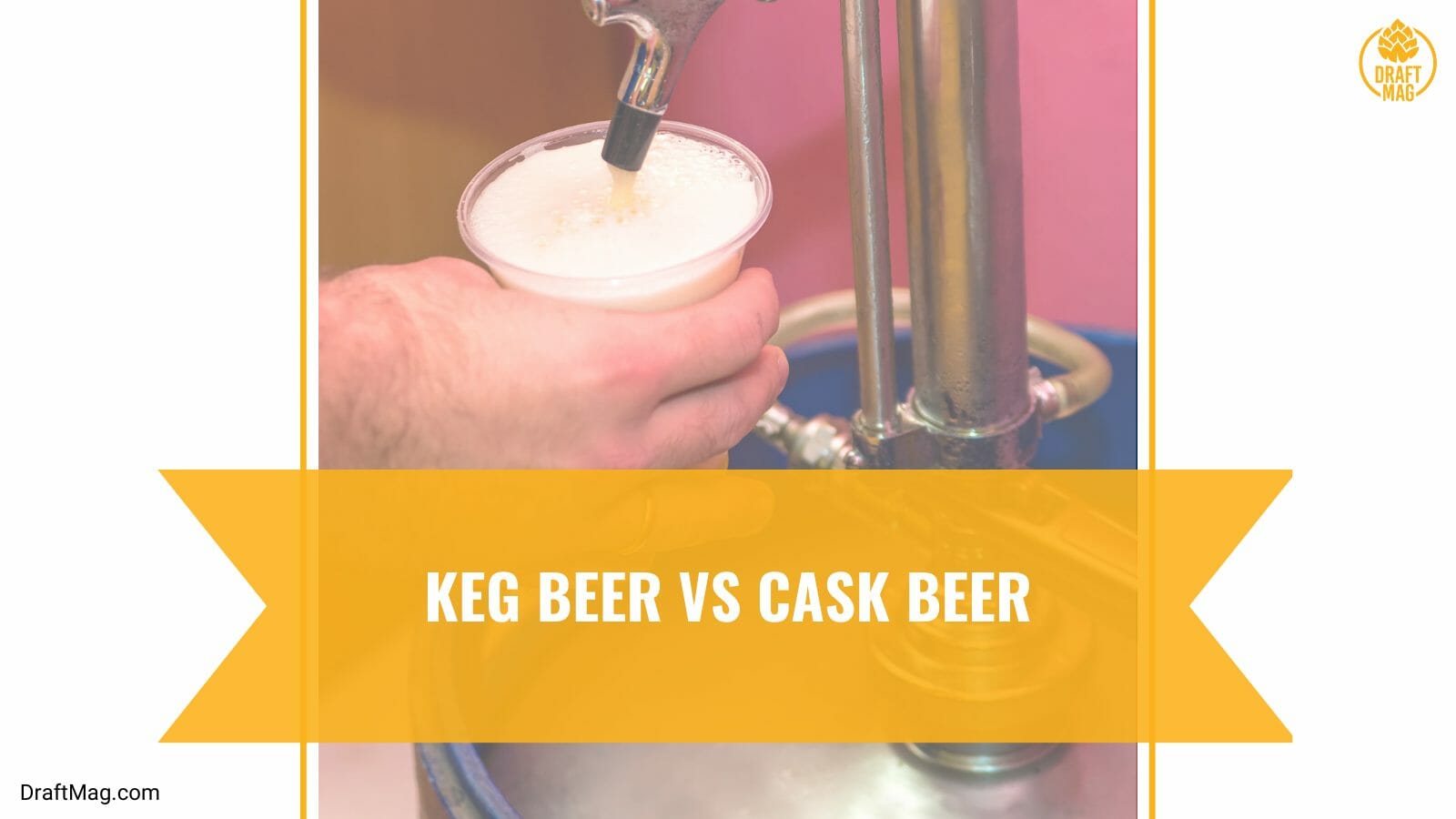 As such, brewers of cask ale do not interfere with the brewing process, and it is usually dispensed directly from the cask by hand pump or by gravity. Concisely, the main distinction between real and keg ale is that brewers do not filter the real ale, and the yeast remains present in the container from which the server dispenses the ale. Most times, a drab secondary fermentation process continues into the drinking container on the way to the consumer due to the yeast in the cask ale. Thus, this allows the beer to retain its natural carbonation.

That way, real ale is served without extraneous carbon dioxide, but the server must ensure the yeast at the bottom is not poured alongside the beer while dispensing the ale. On the flip side, keg beer loses its natural carbon dioxide during filtration, so the brewer must artificially re-carbonate the filtered beer, making the beer very turbid or gassy.

If you’ve ever been to a draught beer industry, then you’ll agree that this beer has certain advantages and disadvantages. Check them out below:

Most drinkers enjoy the satisfying glimpse of freshness they derive when drinking draft brew. Once a keg feeds the tap, the beer remains fresh for only two days, but most busy bars exhaust countless barrels before sundown. You’ll find that the taps or fixtures keep running without restraint since they have to serve various beer rounds in minutes. 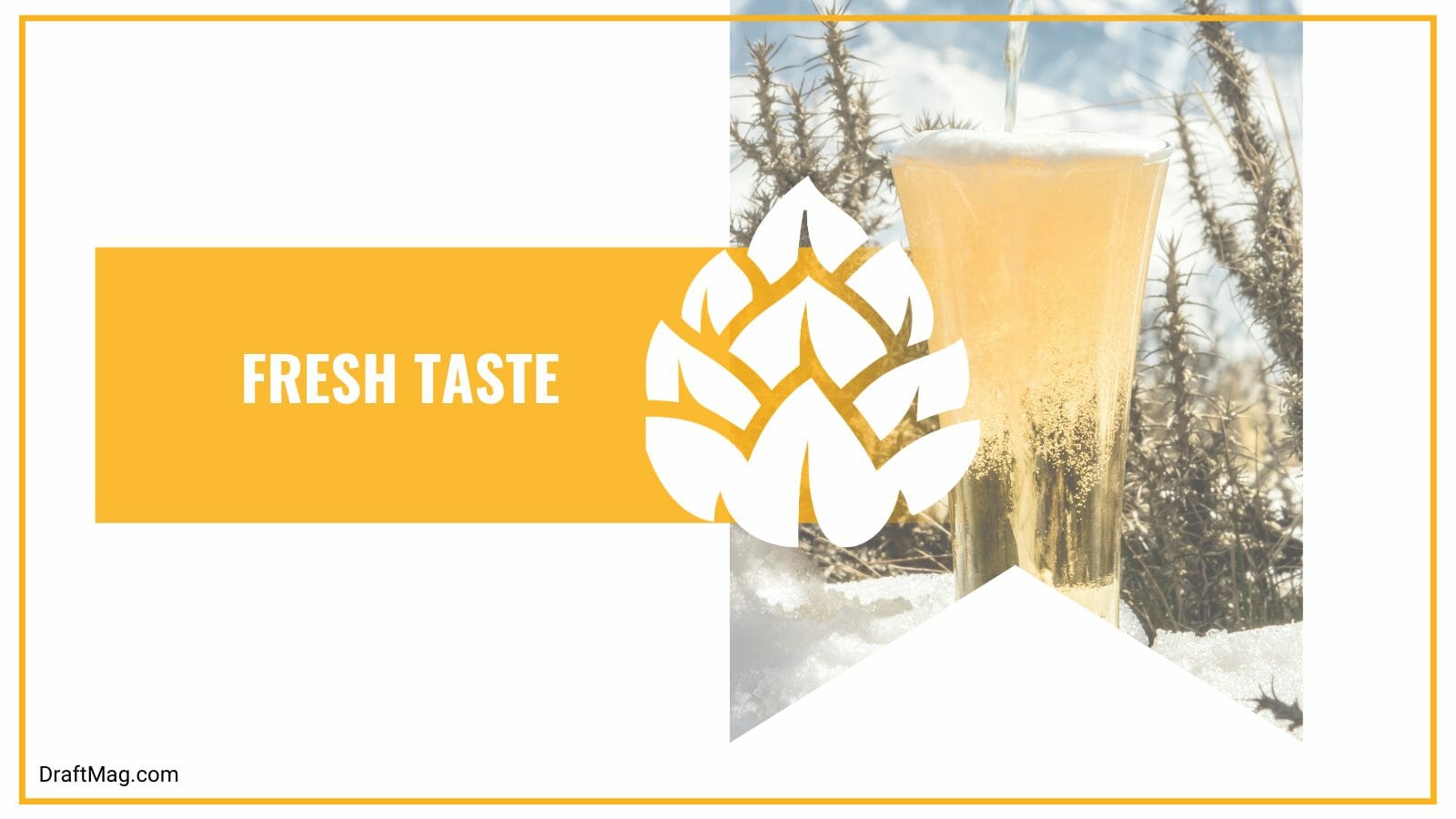 Therefore, you are more likely to drink a freshly brewed beer if you drop by these bars. So draft tap options in quality brewpubs are often fresher than the can or bottle options that might have been stored for a while. Nevertheless, this doesn’t imply that other beer varieties are not good offerings.

– Immunity Against Temperature and Light

Draught brews are often immune to the degrading effects of light and temperature since the keg or barrels are stored in dark and cool places away from sun leakage. Kegs offer suitable means of transporting draught beer as they minimize exposure to sunlight, which helps increase the overall shelf life of the brew.

Different brew styles, including those in bottles, have ideal serving temperatures and pressure points. Draught beer taps allow expert bar owners to adjust the pressure fixed on each keg. 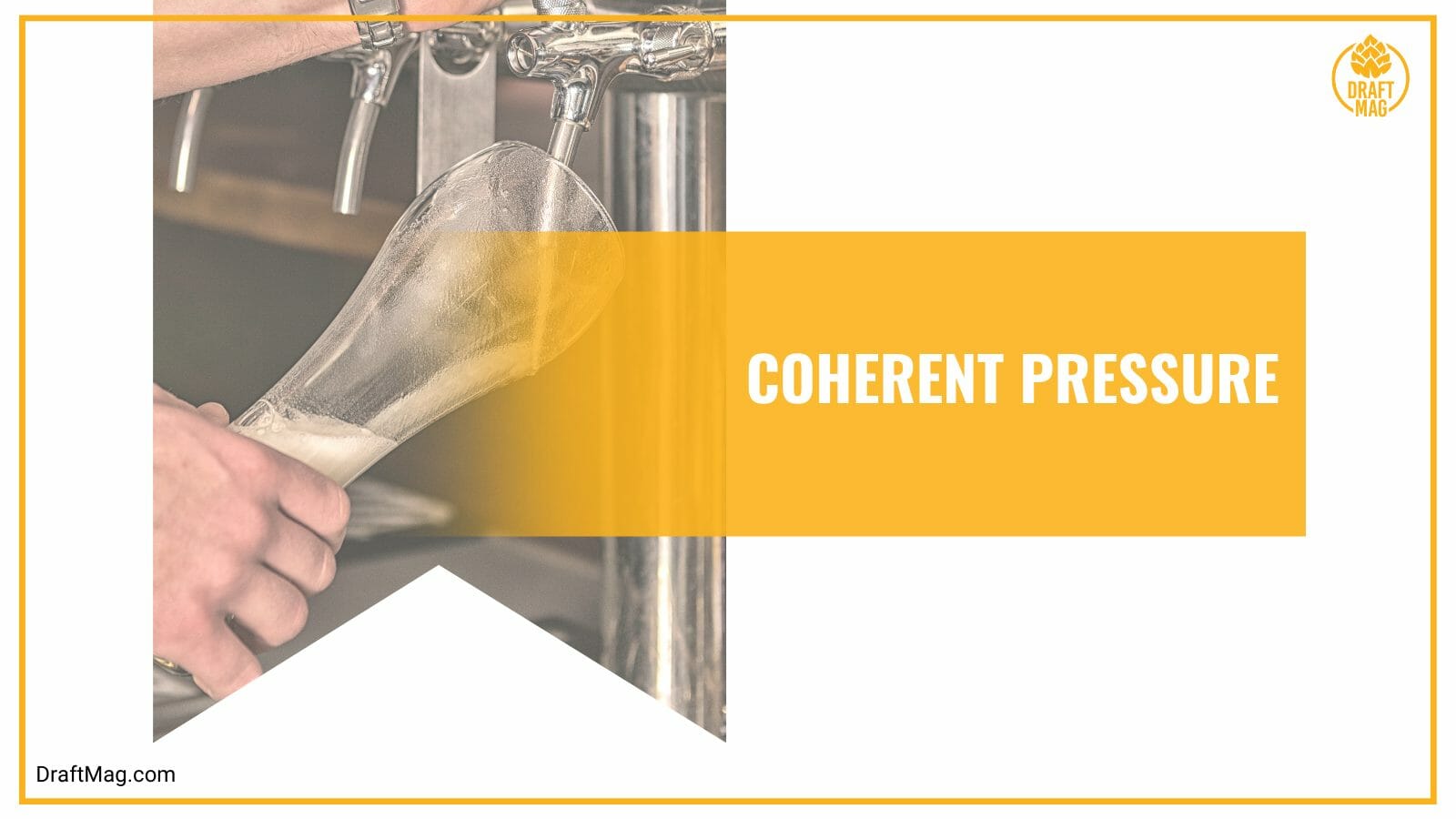 Thus, they can easily modify the overall mouthfeel, fizziness, texture, and bubbles to make a satisfying drink.

This is the main disadvantage of draught beer. Over time, most tap lines have blockages such as ice, kink, or grime. For this reason, not maintaining the beer tap lines can add impurities to your brew.

Aside from this, dispensing the beer at a frosty temperature through warm beer lines might create excessive foam than you would like.

The main reason is that the temperature shift allows carbon dioxide to escape from the suspension and form more foam than necessary. On the other hand, serving it too warm can affect the appearance and taste of the beer. Expert brewers suggest dispensing flavorful draught beer varieties at mildly warm temperatures to allow the drinker to savor and appreciate the flavor to the hilt.

In the meantime, it remains essential to control or cool down the temperature of draught beer kegs before serving. Moreover, kegs are large liquid containers, so they take quite some time for the temperature to subside to the optimal temperature. Frequently, the brewer waits until the beer cools down to about 37 to 46 degrees Fahrenheit. Keep in mind that placing the beer keg in a refrigerator set at the proper temperature for 24 hours is best to hasten the cooling process.

In the early days, beer makers transported and served beers directly from barrels before the innovation of the beer engine in 1785. The term draught is an ancient English word that originated from Dragan, which means “to pull or carry.” As the story goes, the medieval monks were one of the first groups of individuals to store beers in containers. 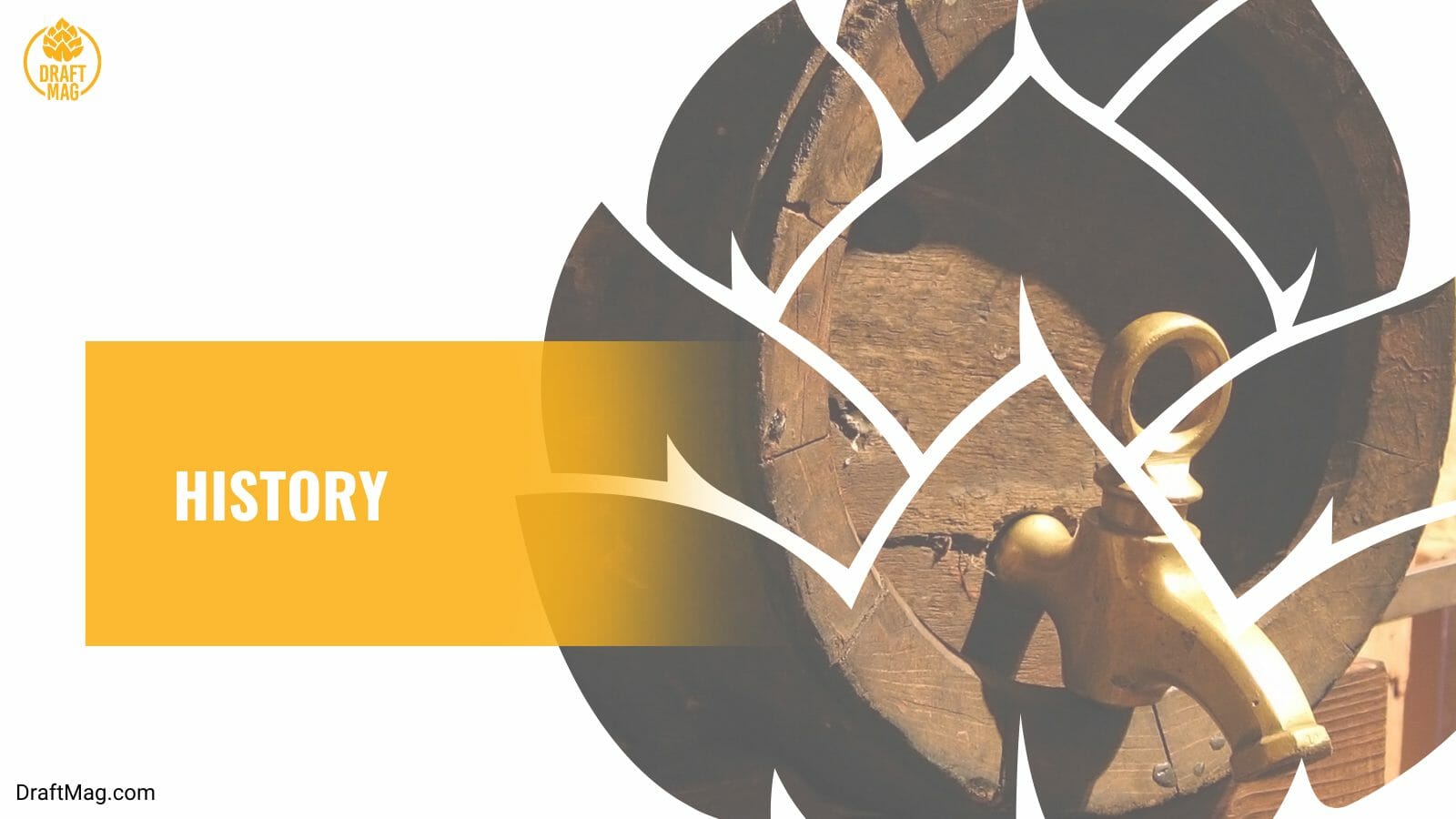 Moving forward, in the early 20th century, beer makers started serving draught beer from pressurized containers. Soon after, this invention rolled out to various bars in Europe and the rest of the world. Some drinkers did not immediately welcome the concept of dispensing beers through pressurized systems because often, the beer loses flavor so the shelf life could be increased. Also, at some point, many beer lovers rejected keg beer because the yeast in the beer gets rendered inactive during serving, thus giving up the flavor.

Keg beer uses artificial carbon dioxide to pressurize the beer, so after the gas disperses, the flavor is lost. More recently, draught beer is almost exclusively used to describe beer served with the pressurized system in contrast to the traditional cask beer. At the same time, most conventional drinkers maintain that draught beer is stored and served from a cask, not from pressurized containers.

– Why is Draught Beer Price More Affordable Than Bottled and Canned Beer?

Generally, draft beers are less expensive than bottled or canned beer because of the much lower packaging cost, which is why more people opt for this beer option. Bottled beer comprises a glass bottle, cap, and label, while canned beer utilizes a metallic container with a label.

All these cost drivers contribute to the higher cost of bottled and canned beer compared to draught beer. In fact, you can choose to make your draught beer at home at a cheap price and to your preferred taste.

– Which is Stronger: Draft Beer or Normal Beer?

Normal beer is stronger because draft beer is usually less intense than most other beer varieties. The alcohol content determines the strength of your beer, so to know how strong your beer is, check the details of the alcohol content otherwise expressed as ABV.

ABV is a percentage figure that denotes the alcohol parts there are per hundred parts of the drink. Sometimes, the draft and bottled or canned beers of a brand have a different ABV. Another critical factor that determines the strength of beer is your drinking habit. Besides, many attest that downing beer rapidly hastens intoxication.

– Does Draught Beer Have Higher Carbonation?

No; in most cases, draft beers have lesser carbonation, and this is because before dispensing the beer, the brew runs along the tap lines and into the glass. So during this journey, some carbon dioxide escape, making the beer smoother and less fizzy.

Draught beer is a specially served beer that maximizes the drinking experience with its balanced fizziness and flavorful character. We discussed the vital features of this unique brew. Here are the essential points we mentioned:

Stop by a quality bar today and order a chilled round of draught beer to enjoy this fizzy brew that will keep you coming back for more!