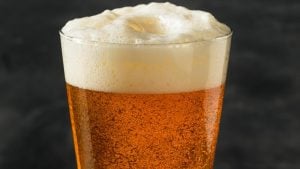 Homebrewers usually look out for a good golden ale recipe when the summer months become hotter and they need a crisp and refreshing beer. However, golden ale is a perfect beer for all seasons and occasions.

Used interchangeably with blonde ale, golden ale is pretty easy to make, with straightforward recipes that any homebrewer can get the hang of. Keep reading our complete guide to know how to make golden ale in your home.

How to Make Golden Ale

It’s pretty straightforward to make this type of beer once you have the golden ale yeast, malt and hops that you need to get it done. Our recipes will include the malt bill, the list of the different malts or grains you need, and the yeast. It will also have a hops schedule, which outlines the hops you will put in the beer when making it, and the time you will add it.

You can make your delicious golden ale and leave it to ferment using only these three components.

When making a British blonde ale, the highlights are the English ingredients. While Maris Otter is the real star, it needs to be combined with other grains to prevent an overly biscuity ale. You can also add flaked corn and sugar to your beer, but avoid using crystal malts.

English hops are also used in this recipe, and they are usually citrus-forward. You can also add some German varieties to give spicy and floral hints. All the added hops should provide a combination of bitterness, flavor and aroma.

Yeast is not very important in homebrewing British blonde ale, but it should still be used. Avoid using those with high esters, settle for neutral yeasts instead.

When brewing your American blonde ale, priority should be placed on the base grain while keeping the specialty grain at a minimum. You can also add light crystal malts and flaked wheat for proper head retention.

When selecting your American-style golden ale hops, you are open to two hop varieties focused on flavor and aroma, as this beer isn’t meant to be bitter. It would be best to dry hop the beer to improve the scent. If you’re experienced with homebrewing, you can play around with different hop varieties, but beginners can follow our schedule.

As for the yeast, you need one with moderate fruity esters and low-temperature fermenting to achieve the light and clean taste of American-style golden ale.

What Is a Golden Ale?

Golden ale is an easy-drinking beer with no dominating hop or malt characteristics and is an appealing visual experience. It is fermented with ale or lager yeast and can have spices, honey and fruit added for diverse tastes.

The golden ale gets its name from its straw yellow to golden color, depending on whether you make the British or American style. It has the exact origin of the English ale, German Kolsch and other mild types of beer.

Before the 1700s, most beers were dark brown to black, with no such thing as pale ales or lighter beers. It wasn’t until after the 18th century that pale ale emerged and was seen as an umbrella over different kinds of similar beers like IPAs and English Bitter.

Although golden ale can be traced to the 1700s and 1800s, American golden ale has only been around for a short time. It emerged in the 1970s and is also called the American blonde ale. This beer has low alcohol content and an easy hop schedule, perfect for drinking throughout the day without getting wasted.

The color of this beer ranges from light yellow to deep gold with a medium white head. It should also have good head retention and a clear appearance if appropriately made.

American blonde ale features a light, sweet, malty scent with notes of bread and caramel. It also has a moderate hop aroma, with various fruity, floral and spicy tastes.

The beer has a smooth mouthfeel without feeling heavy on the tongue. It is a pretty light beer with medium to high carbonation and body.

When you drink the American blonde ale, you can taste flavors of malty sweetness with hints of toast, wheat, bread and biscuit. You will also taste low caramel flavors, although this isn’t always the case. Fruity esters are welcome, but they should be low, and as for the hop flavor, it should be light and unaggressive. The beer has low to medium bitterness and a dry to sweet finish.

British golden ale is pretty similar to the American style, but there are some noticeable differences. For one, this British-style ale is hop-forward but is still pretty drinkable. The drinkable and refreshing beer tastes excellent during warm weather and can be drunk all day long.

This style of beer features British roots that beer enthusiasts will be able to identify. It is also called British blonde ale, golden bitter, summer ale and summer bitter.

The color range for British blonde ale is straw to golden with brilliant clarity. As for the head, it is white but low because of the low carbonation level.

The hop aroma of the British-style golden ale is moderately low to high. With various English hops, you can enjoy floral, earthy and herbal scents. You can add American hops with citrus flavors, and there are also hints of malt, caramel and fruity aromas.

The British blonde ale is a light to medium-bodied beer with low carbonation. Although it is a light beer, stronger versions can feel warmer.

British-style golden ale features a low malt character with hints of bread and biscuits. Unlike the American style, there is pronounced hop bitterness set at medium-high. The citrus hop flavor is standard in this ale, with low esters and a dry finish. There are no caramel notes in this beer.

What About Belgian-style Golden Ales? 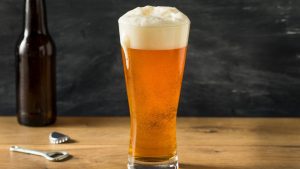 Belgian style golden ales are strong, with complex fruity notes and pretty high alcohol content. They are made with a special kind of Belgian yeast and cannot be drunk casually throughout the day. Belgian golden ale beer styles are usually seen as golden ale, but they aren’t exactly under the same umbrella.

In contrast, the American and British styles are bright, light and low-ABV, so you can enjoy these drinks casually and down one or two glasses whenever the weather is too hot. The typical golden ales are perfect when hanging out with friends, getting outdoor work done, lounging on the beach, and more.

Both American and British style golden ale can be paired with similar food. The latter goes well with smoked food, summer salads and pasta, or you can go the extra mile with delicious paella. 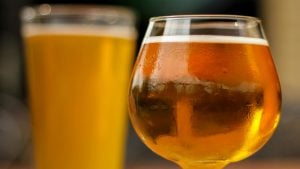 Novice and experienced homebrewers will quickly get the hang of making golden ale, and it’s always fun to experiment with the different styles and flavors.

With this complete recipe guide, you can start making a delicious batch of golden ale for you, your friends and your family.