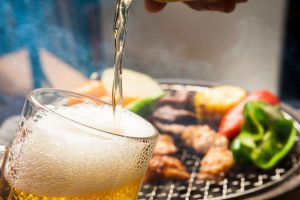 Beer brine is the new cooking trend. If you know a thing or two about cooking, you will probably also know that brine is an important cooking ingredient, especially for meat. But what if we told you that you could experiment with regular brine by adding your favorite brew to it? So, here is a comprehensive guide on making and using beer brine for your next recipe.

A brine is a solution of salt in water in which the concentration of the former usually remains very high. Brine is used to marinate meat, fish, and sometimes even vegetables. Depending on the type and size of the meat, you could be required to soak it in the brine for about 30 minutes to a few days.

A beer brine, on the other hand, is a similar salt-water solution to marinate your cooking ingredients with the added flavor of the beer.

How Does a Beer Brine Help in Cooking?

Beer brine is used to enhance both the texture and taste of food. If this is the first time you are reading about beer brines, then it’s obvious for you to wonder why it is essential and, if at all, it makes a difference.

So, here are three benefits of using beer brine to marinate your ingredients:

When you cook a slice of meat at a high temperature, its natural moisture content will evaporate. This can leave the meat dry and hard after being cooked. However, if you brine the meat, the solution will seep deep into its layers and help it absorb more liquid.

In this way, even when its natural moisture evaporates during cooking, the additional liquids that it absorbs from the brine will keep it tender and juicy.

When you marinate a slice of meat, a fair portion of the marination solution seeps deep enough to leave behind a permanent flavor. Similarly, a beer brine will enter your meat and implant your brew’s authentic taste and flavor into it. The flavor of beer mingled with the original taste of your recipe will produce a better-tasting, delicious dish that has a hint of your favorite beer.

– Adding a Hint of Beer

When you use regular brine, you first need to soak the meat into the solution to soften it up and then marinade it separately for the flavors to seep in. However, with a beer brine, you get the benefits of both marinating and brining with a single liquid.

It means that soaking the meat in a beer brine will not only make it tender and juicy but will also season it with the beer’s flavors at the same time.

How To Make a Basic Beer Brine

Before we head over to some popular beer brine recipes, let’s discuss how you can make a basic beer brine at home.

Now that you know the ingredients needed to make beer brine, here is the easiest method to make it:

That’s all that you need to do to make a basic beer brine at home that will go with almost every recipe. Unless you have added any extra herbs for flavors, you can also store the unused beer brine in your refrigerator for the next meal.

Best Types of Beers for a Beer Brine 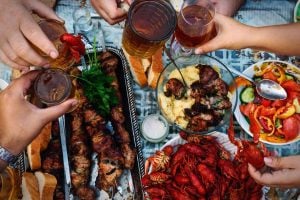 If you are a little lost on choosing the best types of beer that will be suitable for your recipe, then here is a little aid.

It is believed that beers that are maltier and have more yeast content are likely to flavor your ingredients better than light beer. Here are some types of beers that you can use for your next meal.

Now when it comes to IPAs, you have to be a little careful. We recommend that you only pick the light and fruity IPAs. They work best with lean meats like chicken and fish. If the IPA’s alcohol content is too high, it might make your recipe bitter.

By now, we are sure that you have a fair knowledge about beer brine and preparing a basic beer brine that works with almost every recipe.

But if you plan to make your meal a little special, your brining too needs to stand out. So here are a few popular beer brine recipes to go with different types of common meat.

Now the basic beer brine recipe remains the same for every recipe, but here are a few tips to make your prepare your beer brine for chicken:

If you are preparing to cook a pork delicacy, then a beer brine pork will definitely help accentuate the recipe’s flavors.

Here are a few tips for brining the pork meat perfectly with your homemade beer brine:

Meat isn’t the only thing you can use beer brine. It is also popularly used for a variety of fish and seafood items.

So here are a few things you need to remember when brining your fish or seafood with a beer brine:

Nothing makes a turkey juicier and flavorful than a well-prepared beer brine. Here are a few things you need to ensure while brining your turkey. 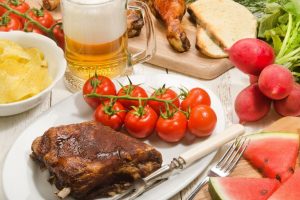 Using a beer brine to season your recipe ingredients is a great way to add exotic flavors to your food and enhance its overall quality. The best part about beer brines is that you can experiment and add as many flavors as you want to impart each of your recipes a unique touch that no one can imitate.