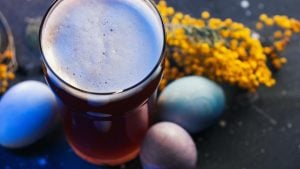 Egg in a beer:

Does this phrase make you cringe a little, or do you find it fascinating?

There are two types of people in this world, those who like to put eggs in their beer, and the others who don’t.

This is one practice that goes back over a hundred years and is still practiced by some brewers, so it is definitely a thing. Continue reading to find out how this fascinating concept started and if it’s really safe to be drinking eggs with our beer.

Why Do People Drink Beer With Eggs?

There are some weird reasons and some legitimate ones as to why people drink beer with eggs mixed in them, including health benefits and tradition. This custom started a long time ago, but there are many more reasons why people still follow this tradition.

Here are the top 10 reasons why and how people drink the egg and beer combination:

Eggs are a great source of protein.

Keeping this in mind, people thought why not make beer a starter drink for the day?

This curiosity resulted in the egg in a beer combination.

During the Great Depression, a fairly rough and dark phase in time, people would line up for bread and to crack eggs in their beer to get their share of nutrition for the day. Eggs and beer were more easily available than meat.

In Chile, eggs and beer are considered part of dessert. It is called Malta Con Huevo, which is precisely a mixture of dark malt beer, sugar and cracked eggs.

This is mostly a myth. Back in the days, people believed that eggs in beer could cure hangovers because eggs are a good source of protein, which they thought would reduce the rate of hangovers the next day. There is a belief that the nutrition from an egg keeps the hangover at bay the next day, but the very small amount of nutrition actually does nothing.

Always remember, an uncooked egg gives only half the protein than a cooked egg does. Your best bet to avoid a hangover is to drink a glass of water for every glass of beer you had. A 1:1 ratio will only help you straighten up better the next day.

Remember the movie “Cocktail” where Tom Cruise watches his boss fix a drink by adding raw eggs and tomato juice to beer?

It’s like a bloody mary minus vodka plus beer.

People these days are more willing to try anything that’s new or peppy or sounds offbeat, including trying eggs in beer.

In Vietnam, they crack hundreds of eggs in beers, coffees and colas. One such cafe that does this is the Giang Café, whose owner grew up drinking these recipes and decided to continue the tradition.

Egg and alcohol were a pretty usual combination back in the days. This drink was often consumed by soldiers on the battlefield, and they called it Fallujah Omelet, which meant eggs topped in jager bombs. This was considered a social lubricant.

The street name for raw egg in a beer is “egg burp.” Folks would drink this on an empty stomach for a streetside burping competition.

West County White Ale is a beer fermented with raw egg whites. A bunch of homebrewers would crack dozens of eggs in their wort to ferment beer. This is something you can try as well.

Raw Egg in Beer: A Brief History Into This Practice

The practice of putting eggs in beer dates back to the 17th century, when the idea of beer with egg was pretty famous in England. The reason people did it back then was pretty much because of its perceived medicinal purposes. They added whipped eggs, spices, cream and sugar to beer to make a thin, custard-like dish to treat flu and colds. People believed eggs and beer combined helped an ill and sick body.

In Macbeth, Lady Macbeth makes a dish called posset, which is a mixture of egg and beer, and uses it to drug the guards outside Duncan’s home. People back then used this recipe for a boost in libido, to cure flus, etc. but apart from its medicinal purposes, beer with egg yolk helped the particles in beer settle down.

The brewing process back then wasn’t as polished as it is today. Their beer would usually come out extra cloudy and adding an egg in the beer helped reduce its cloudiness.

In America, this came to be known as “flips,” which are basically any form of alcohol mixed with egg, sugar and hot water. Be it wine, whiskey, beer or rum, it is always called flip. Making flips is common even today with many brewers, especially during the winter months.

Miners Breakfast: The Famous Drink From the 19th Century

In the 19th century, miner’s breakfast (a widely popular drink) made rounds throughout the east coast. This only meant one thing – raw egg in beer – but instead of one egg, it was two eggs cracked in a beer served with a 30ml whiskey shot.

This is also called the Irish breakfast and is still available across the country. In mining towns around northeastern Pennsylvania, bars would open as early as 5 a.m. to serve miner’s breakfast. The miners would line up and first gulp a shot of whiskey followed by chugging an egg with beer mixture.

How To Add an Egg to a Beer

If you have been wanting to try drinking beer with an egg, the recipe is pretty simple:

The yolk won’t dissolve into the beer. Instead, it will swirl a little and settle at the bottom of the glass.

How to drink this you ask?

Well, drink your beer just like you would usually do.

When you reach the end of the glass, give it a nice big swirl and gulp both the remaining beer and the yolk in one go. You can bite into the yolk or take it in slowly, if you are not a fan of gulping it. This will make the beer taste just a little sweeter.

Now that we know the generic recipe for a raw egg in a beer, let’s move to something even more bizarre in the world of beer.

Have you ever heard of a beer that can act as an aphrodisiac? 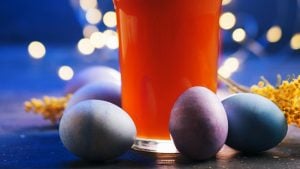 The Jamaican Guinness Stout with raw egg in it is one such drink that is considered an aphrodisiac in some parts of Africa and the Caribbean. Eggs are high in Zinc, which helps in producing testosterone, while the Iron in dark beers helps in increasing red blood cells.

This essentially improves your blood circulation, thereby acting as an aphrodisiac and increasing the libido. Some researchers in Italy state that a pint a day also reduces your chances of having a heart attack by 31 percent, keeping you healthier and fitter.

Place Guinness stout in a blender and add sweetened condensed milk to it. Crack one raw egg in a bowl and beat it, then add the egg to the blender with the stout and blend the ingredients well. Pour the drink into a large jug and add cinnamon and nutmeg. Give it one swift stir and refrigerate to serve chilled.

This drink is well-known for its notorious nature. Pretty common among men, it is known to increase libido in men who seek vigor.

Is Cracking an Egg in a Beer Safe? Know All the Risks

There have been no major side effects related to drinking beer with eggs. Raw eggs are known to cause gastrointestinal problems called salmonella (a harmful bacteria), but while salmonella can be dangerous, the likelihood of you catching it is pretty rare.

The current craze of mixing eggs and alcohol has caused some worry among doctors. Some doctors in the UK advise greatly against this combination being consumed by senior citizens facing danger from salmonella. Raw eggs in the olden days were used to make classics like whiskey sour, which was considered a safe drink, but now everyone wants to add everything everywhere.

There is another belief that lemon or lime juice in a cocktail can instantly kill salmonella, but the cocktail should be pretty strong in nature. This brings us back to beer and eggs — beer is not considered a hard liquor, which is why eggs in beer pose some health concerns.

Pregnant women are totally advised against drinking eggs with beer (or even beer in the first place). Raw egg whites also have a protein called avidin, which slowly blocks the absorption of biotin, so it is best to drink eggs in beer in a moderate quantity to avoid such a reaction.

Some people are generally allergic to eggs or egg products. They seem to have allergic reactions and skin irritations either because of the yolk, the white or the egg as a whole. Such people should avoid drinking beer with eggs to stay within their safety limits.

As long as the eggs are properly refrigerated and you don’t allow bits of the shell to fall into your beer, adding an egg to your beer is not likely to harm you in any way. 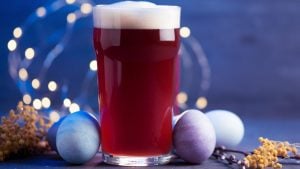 If you are planning to put an egg in your beer, you might as well try it out. After all, experimenting is good and this is a tried and tested recipe.

Whether it’s about the nutritional benefits, traditions carried forward from generations, or just to achieve a dare against a friend, it would still be fun. Who knows, you might even discover a new favorite for yourself!