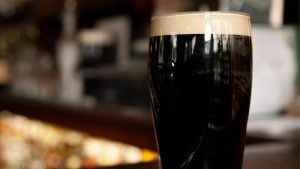 Learning a Schwarzbier recipe is a standard step for anyone who wants to go further in their homebrewing experience. After all, you’ll be attempting to replicate one of the oldest beer styles in the world.

Dark beers have never gone out of style, but the classic German-style Schwarzbier is hardly ever mentioned. If you’re curious about how to make it, keep on reading our complete recipe guide!

With these tips, you can now start making your Schwarzbier. You can decide to make up your recipe if you’re an experienced homebrewer, but it’s always better to follow one for your first time.

Follow the all-grain recipe below to make Schwarzbier beer.

Here is the recipe for extract brewers to follow.

Schwarzbier is a dark lager with medium to high bitterness and a light to medium body. It means black beer in German because of the color of the lager. This beer is considered the oldest continuously brewed style of beer in the world. The alcohol content of this beer is usually around 5 percent, and they tend to be refreshing and smooth.

The beer is usually made with malted barley combined with hints of toast, chocolate, nuts and caramel in its aroma and taste. It finishes crisp, dry and clean, with a subtle hop bitterness blended with the malty character.

The first written references to Schwarzbier are dated back to 1390 in Brunswick, but the actual origin of the lager is believed to be in Kulmbach, a place in southwestern Germany. This is because of the archeological evidence in the site, which points towards brewing the same type of beer since 800 BC.

Kulmbach, which still brews Schwarzbier today, is known as the birthplace of the style. This proves that this is the oldest active brewing center in the world. Kulmbach is also the place where monks first brewed the black beer.

Nowadays, black beer is popular all over the world and is even made by craft brewers in the United States.

When making your Schwarzbier, you should keep this style profile in mind so you can achieve the standard appearance, scent, mouthfeel and taste of the beer.

Schwarzbier has the appearance of black lager, ranging from deep copper to brown. The head is tan-colored with a creamy texture. 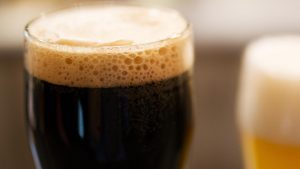 The powerful aroma you’ll get from Schwarzbier is the malt sweetness from the Munich malt backbone. The noble hop aroma gives you hints of toast or bread crust. You can also sense other aromas like caramel, toffee and nuts. There are no fruity esters or diacetyl in the aroma of this beer.

Schwarzbier features a medium-full body with a strong feeling on the palate. There’s slight alcohol warming, but it does not overshadow the malty taste. You will also feel moderate carbonation.

The highlight of the taste of this dark lager is the Munich malt used in brewing. The taste is similar to bread crust but becomes more complex with its nuttiness, toast, chocolate and caramel notes. It shouldn’t be dominated by the caramel or feature any roast character.

The beer is not considered bitter, so the hop bitterness should be barely noticeable with the malt as the dominant flavor. It finishes dry with some lingering bitterness seeping into the aftertaste.

There are a few things to keep in mind when brewing your dark lager. You need the right ingredients, especially with new recipes, if you want them to taste similar to German Schwarzbier.

The best base malts to use for a Schwarzbier recipe are Munich malts and Pilsner malts. You’ll also need specialty malts, but more on that later on. It’s essential to know how much each one should be in the brew.

If you’re going for a traditional recipe, the dominating malt should be the Munich, while the Pilsner and other malts make up the rest of the wort. The Munich malt also gives a nutty and toasty flavor and aroma, which is expected in Schwarzbier. The Pilsner malt provides the dry and crisp finish characteristic of lagers.

The specialty malts add other flavors like caramel and chocolate, but since they can’t be overwhelming, you can use only 10 percent of this in the total wort. You also need malts to add to the color since you’re trying to achieve a dark lager.

Hop bitterness should be present in your beer, but it shouldn’t dominate it. You can use German noble hops with a soft flavor and aroma, like Hallertau and Terrnang. These also provide just the right amount of bitterness. You can use American hops similar to the German ones to try something new.

The best yeast used to brew Schwarzbier is clean German lager yeast. It can be Bavarian Lager or Pilsen Lager yeast, too, depending on what you have access to. Regardless of what you use, it’s best to leave the beer to lager for two months before bottling and drinking.

You can enjoy drinking this dark beer with different types of food including barbecue, steak, rolls, spicy dishes, bratwurst, cabbage and dark chocolate. The beer goes particularly well with meat, whether smoked or roasted, especially those with fruity sauces. It also goes well with fruity and chocolate desserts.

If you enjoy eating cheese, the bold flavors of Schwarzbier go ideally with smoky cheeses such as Gouda or German Bruder Basil. You can bring the fruity flavors of the beer out by pairing it with creamy cheeses like Wensleydale.

As for serving, you should pour your Schwarzbier in a tulip glass, as the round shape of the cup holds in the aroma, allowing you to enjoy it while you drink. It also helps in creating and retaining the foamy head.

If you don’t have a tulip glass, you can also use a goblet or chalice. It should be served at 46 degrees Fahrenheit.

Schwarzbier should be stored at cooler temperatures and in a dark place. 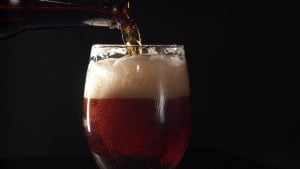 Fans of dark lagers will be excited to try making the Schwarzbier, although trying something new is great for any homebrewer!

You can give the oldest beer in Germany a go in the comfort of your kitchen.

Get your home brewing kit ready and try a delicious batch of Schwarzbier to drink in the next two months.