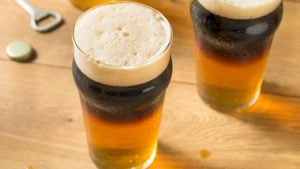 Half and half beer is what completes Saint Patrick’s day. The stunning appeal and remarkable taste of half and half beer combinations never fail to satisfy beer enthusiasts. If you don’t want to restrict this tasteful beer cocktail to special events, we have the perfect recipe for you.

Today, we will share a few tips on making the perfect glass of half and half beer at home.

What Is a Half and Half Beer?

A half and half beer is a combination of two different types of beer. The recipe usually consists of Guinness (Stout) and a pale ale – mixed.

Owing to the viscosity of the two alcoholic beverages, they do not blend right away. In fact, they layer up on top of each other. The distinct shade of the individual beers divides the cocktail into two distinct halves and that’s where it gets the name from.

– How Does It Taste?

The taste of this layered beer depends on the two constituent beers. That’s why a lot of people use Guinness for this recipe. Its perfectly sweet flavor with hints of chocolate makes the cocktail delicious. You can also adjust the strength of the drink by experimenting with the ales and stouts.

How To Make a Half and Half Beer at Home

Placing a spoon is optional, but it helps you add the second layer gradually without disturbing the first layer of pale ale. A lot of people also like to bend the spoon head to 90 degrees so that it perfectly fits inside the glass and stands perpendicular to the beer.

If you do not have a spoon at hand while pouring a half and half beer, here is what you can do to ensure that the first layer remains intact.

A lot of people find the spoon method a little tricky because:

If neither of these two methods work, you should try the beer layering tool method. 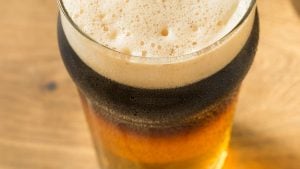 A beer layering tool consists of a hollow hemisphere with extended rims that go over the glass’s rim. The extensions help the tool sit steadily on the glass without external support. The cavity of the tool consists of several tiny holes which allow the beer to pass through it into the glass.

To be on the safer side, we recommend buying beer layering tools sets that come with a pint glass. The tool might not fit well with other types of glasses in different dimensions and shapes.

What Beer Can You Use ?

The beer you can use to make a Half and Half beer is Guinness. Being a stout beer, it’s light and effortlessly floats over other types of beer.

Here are a few more Guinness combinations you can experiment with:

– Tips in Choosing the Perfect Beer

When preparing a half and half beer, knowing the recipe alone will not help. You also need to know the possible combinations of beer that can be used to make the two alcoholic beverages layer above each other.

Hence, before choosing the perfect beer combination for a half and half, here are a few things you need to keep in mind:

– What Is Black and Tan Beer?

The Black and Tan is another name for half and half beer, which basically refers to the same recipe of mixing a pale ale with a stout to create a layered beer.

However, the name Black and Tan is not commonly used these days and is also considered offensive to the Irish people. Black and Tan was the name given to the Royal Irish Constabulary Reserve Force sent by Britain to Ireland to suppress Ireland’s Independence Movement in 1920-1921.

The name is still associated with the injustice meted out to the Irish by the oppressive British forces. Hence, if you are craving a black and tan in Ireland or an Irish bar, simply order a half and half beer.

– How Much Does a Beer Layering Tool Cost?

The beer layering tool costs $9 to $12. Although the tool itself doesn’t cost much, most brands pair it with a pint glass which adds to the cost. You will easily find these tools on Amazon and other online stores.

These layering tools are usually stainless and washable, making them last longer despite being dipped in beers all the time.

– Why Do Beers in a Half and Half Beer Do Not Mix?

The beers in a Half and Half Beer don’t mix because of simple physics. Generally, the bottom layer consists of pale ales, which have a higher molecular density than stouts like Guinness with low molecular density.

Owing to the difference in density, when the two layers meet, it’s difficult for the two layers to merge into each other. For the same reasons, you will see the top layer of Guinness effortlessly floating above the pale ale. 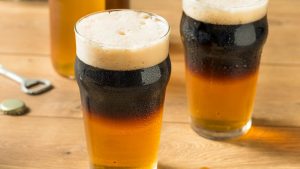 The best thing about beer is there is no limit to imagination and experiments. Half and half beer is one such experimental cocktail that is widely popular among beer lovers.

Let’s look back at the critical points of this article:

What makes this mix even more popular is the ease of creating the perfect beer cocktail right at home. All you need is the right ingredients and this comprehensive guide to pouring out the perfect half and half beer for yourself. Enjoy your little experiment!

Beers Like Blue Moon: Substitutes for This Fresh Summer Drink