Imperial IPA vs IPA is one of the common arguments among beer lovers. While they are both India Pale Ales, there’s no doubt that they are different in terms of styles, flavor, alcohol content, and recipe. Despite their differences, both beers will still give you the authentic ale flavor if you’re drinking the right one. Let’s take a deeper look at their differences below. 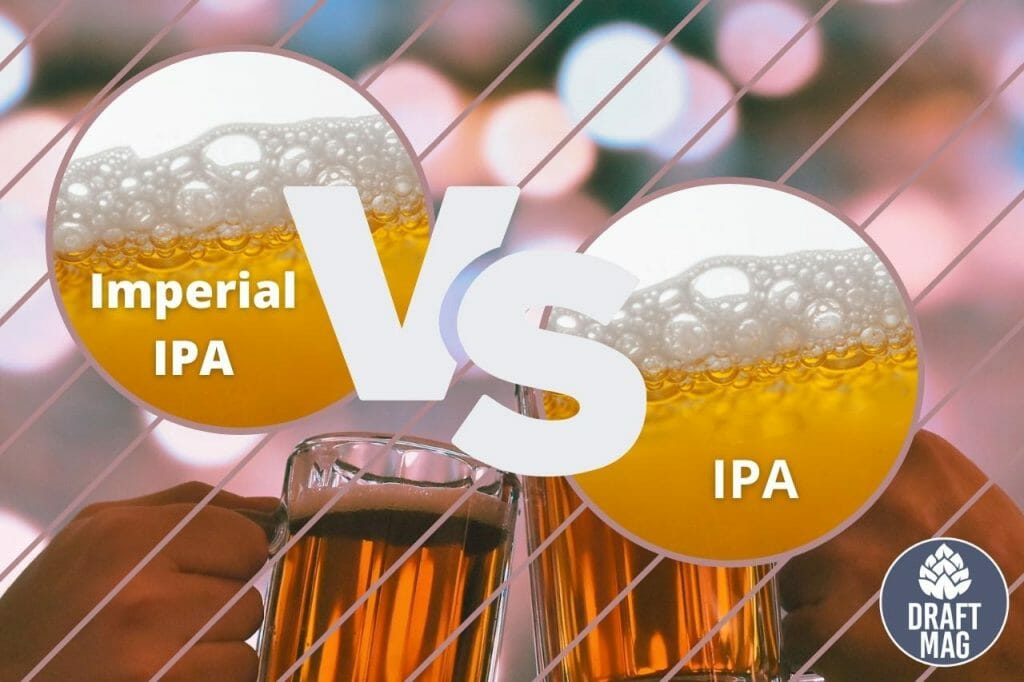 What Are the Differences Between Imperial IPA and IPA?

The main difference between imperial IPA and IPA is the ABV level. India Ales have an alcohol content between 6 and 7.5 percent. However, Imperial ones have ABVs higher than 7.5 percent, meaning more hops, malted grains, and bitter taste than IPAs in the recipe.

What Is an Imperial IPA Best For?

An imperial style of IPA is also a double India Pale Ale and can be easily defined as a bolder version of a regular one. It is stronger, more bitter, and hoppier than standard IPAs. They have a robust hop profile that features different tastings like citrus, earthy, and floral.

This tyle of IPA has a higher ABV, over 7.5 percent, and IBU, between 65 and 100. Plus, the double IPA has more body than the traditional ones. When brewed, imperial ones use a lot of hops for a more bitter flavor and malted grains for higher alcohol content. The double IPA recipe usually has more room for secondary aromas and flavors.

The imperial type of IPA has different sub-styles, which might have more intense and strong flavors and aromas. The main styles include an American double IPA and a New England IPA.

The Imperial style IPA beer came about as a need to brew intense and hoppier brews. It is not sure where the beer originates; there have been claims that the recipe was first brewed in Santa Rosa, CA, at the Russian River Brewing Company, in 1994.

This style focuses on bringing out the hoppy characteristics of a standard IPA. With the high alcohol content, the beer has a more intense and hoppy style. It’s a popular craft beer that you can find in different breweries.

This is also known as a double IPA, and this sub-style originates from the USA. The beer is made with American variety hopes and usually has flavor and aroma notes of citrus and pine. The beer has a high ABV and bitterness, and the hops are not harsh, only intense.

Another sub-style of the imperial style of pale ale is the NEIPA, a juicy or hazy IPA. These imperials have a solid flavor, a full mouthfeel, and a hazy body, but it still has the soft features expected from an IPA. The softness of the beer will become dull because of the high ABV and bitterness.

The hazy IPA is usually made with ale yeast, wheat, oats, and many hops. The wheat and oats give it a full mouthfeel and robust flavor. It is also brewed with adjuncts which make it hazier.

What Is an IPA Best For?

India Pale Ale can be seen as the middle ground between a standard pale ale and a double IPA. It is part of the hoppy beer variety and has a higher ABV than other pale ales. Since there are so many IPAs, this beer style is often confusing.

The history of the India Pale Ale is traced back to when beer was transported from England to India. To preserve the beer, hops were used, which resulted in IPAs. Even though there is few evidence that supports this story, there is little to prove against it.

It is also said that Bow Brewery in England was the first place to add hops to beer, although there is no evidence to support this.

Today, this IPA has become very popular in the United States and has different sub-styles. All IPA styles has distinct qualities, but the most important ingredient is the hops. The hops used to make an IPA depend on the region and style. There is even West Coast IPA, black IPA and triple IPA.

The American IPA is probably the most popular kind, with the main ingredient being a variety of American hops. It is also brewed with ale yeast and two-row malt. American one features a robust and bold hop aroma and a subtle malt flavor.

English IPAs are another sub-style with a more crisp taste than other IPAs. It is made with English hops, British pale malt, and ale yeast and usually has a fruity aroma. These beers are dry, floral, earthy, resinous, and usually bitter.

As for the session IPA, these are usually IPAs that focus on drinkability and have a lower ABV. The ABV doesn’t exceed five percent, making it easier to drink than the standard IPA. The session IPA uses fewer grains and has brighter hops. They are brewed with a variety of hops but minimal grain variations.

As shown in this imperial vs IPA review, the two ales are both of the same kind but have their differences. The main difference is that the imperial one has a higher ABV than the IPA and is hoppier, more bitter, and fuller.

The imperial pale type of ale is always a top choice if you’re looking for an IPA with more alcohol and hops. Both beer styles come in different types and flavors depending on who brewed them. You can also check out their unique sub-styles to get more flavors of IPAs, from fruity and floral to earthy and dry.