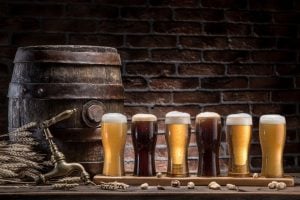 Craft beer vs draft beer: what are these two beers and how are they different? If you’ve wondered the same question, you’re not the only confused one. Draft and craft beer are two types of beer that have their own appeal. With the help of deep research, we’ll help you know the difference between draft and craft beer and whether one of them is better than the other.

What Is a Draft Beer?

Draft beer or draught beer is a type of beer that is stored in a cask or a keg and served through the sprout of a beer faucet or via a tap. Keg beer is a type of draft beer that is served from a pressurized keg. The tap can be pumped by hand or pressurized. Draft beers are made the same way as bottled beer. The term “Draft” originates from the old English term “dragan” which basically means to draw, drag, or pull.

– Draught vs. Draft: What’s the Difference?

Both the word “Draught” and “Draft” mean and refer to the same thing. The only difference is that one of the words is used in certain countries while the other is not. Countries like Ireland, the UK, Australia, and New Zealand use “Draught” while the people in Northern America call it “Draft” beer.

In 1970, the term “draught beer” only referred to the type of beer that was served under pressure. The method of artificial carbonation was introduced in the UK in 1936. Since then, the method gained popularity in Europe and was quickly adopted by the rest of the world. A group founded in 1971 started a movement to protect traditional brewing methods and beer through the “Campaign for real ale”.

The term “real ale” was coined by the same group in order to differentiate between two types of beers: Beer served under pressure and cask-served beer.

Draft or draught beer can be considered better and of a higher quality than other regular beers due to a number of reasons that include:

What Is Craft Beer?

Craft beer (also known as microbrew) refers to the kind of beer that is brewed by small (breweries that produce less than 6 million barrels annually) and independent breweries that specialize in the art of brewing. Craft beers are produced on a small scale in microbreweries with fewer batches each year when compared to large-scale beer productions from big brands. These unique craft beers have distinct and rich flavors that easily stand out. The overall taste, aroma, quality, and appearance of craft beers are different and sometimes even better.

Craft beers have 50 percent of traditional malt as their core ingredient. In regular or large-scale beer production, other adjuncts like wheat, oats, and barley are added instead. Since craft beer brewers focus on making beers with utmost effort and care, the beers always have a strong flavor, unlike regular beers that feel light and almost watery. One of the most popular craft beer styles is the IPA – India Pale Ale.

During the mid-1990s, widely available beers began to lose sales and were on the decline. This was due to the brewing and taste of the regular beers that didn’t appeal to beer-lovers anymore. The big brewers focused on maximizing profits and less on perfecting the taste and quality of beer that led to the downfall. In such a situation, home-based breweries came to light with strong and exotic flavors that the beer enthusiasts were desperately looking for.

What Is the Difference Between Craft Beer and Draft Beer?

Now that we know what craft and draft beer are, it’s easy to point out the similarities and differences between the two beer categories.

In terms of taste, craft beer definitely has an enhanced and richer flavor than regular beers. Craft beers also have more of a bite due to their alcohol percentage.

On the other hand, if you wonder about health benefits, light versions of regular beers are definitely healthier. Apart from increased demand among health-conscious consumers, light regular beers have a watery and bubbly texture. Craft beers have layers of flavors and are full-bodied, but also come with a higher calorie count.

Why Is Craft Beer So Strong?

Craft beers are available in high alcohol concentration, starting at 5 to 10 percent to up to 40 percent of alcohol. In fact, craft beers can get you drunk with just one or two drinks in comparison with regular beers that may require four to six glasses.

Does Draft Beer Have More Alcohol?

No, not necessarily. Draft beers usually do not have more alcohol content than craft beers or regular beers. The alcohol percentage on craft beer is high but draft beers are usually low on alcohol in comparison.

Why Is Draft Beer Worse?

Draft beer can be worse than regular beer when there is a bacterial infection that can cause headaches or bad health. If the keg lines of the draft beer are not properly cleaned, getting sick from drinking it won’t take you very long. Although tap beer offers a fresh and crispy taste for beer enthusiasts, drinking draft beer or from the tap may not always be the right thing to do. How can you solve this? Simple, choose a bar that follows stringent rules regarding hygiene. 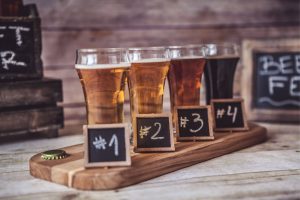 Craft beer and draft beer have their own specialties and uniqueness. The two types of beers have a greater advantage over regular canned or bottled beer. Here are the key points of what we’ve explored about craft and draft beers so far;

Both categories of beer go through their own unique brewing techniques. In a nutshell, draft and craft beer are mostly similar. Beer that is stored in a keg, kept away from sunlight, secured from oxygen, and poured directly into beer glass from beer tap can be considered a draft or draught beer. Craft beer is made by small and independent breweries that focus on flavors and artisanal beer. So, the choice mostly depends on what a beer enthusiast is looking for.