Tart vs sour is a different texture that many beer lovers might find themselves wondering what’s the difference and even definition. Both terms are used a lot of the time interchangeably because of their similarities, but many beer drinkers will tell you that they are different when you look closer. Although they are similar, there is a notable difference between sour and tart beverages and foods, including beer. In this guide, we will look at the main differences between tart and sour tastes. 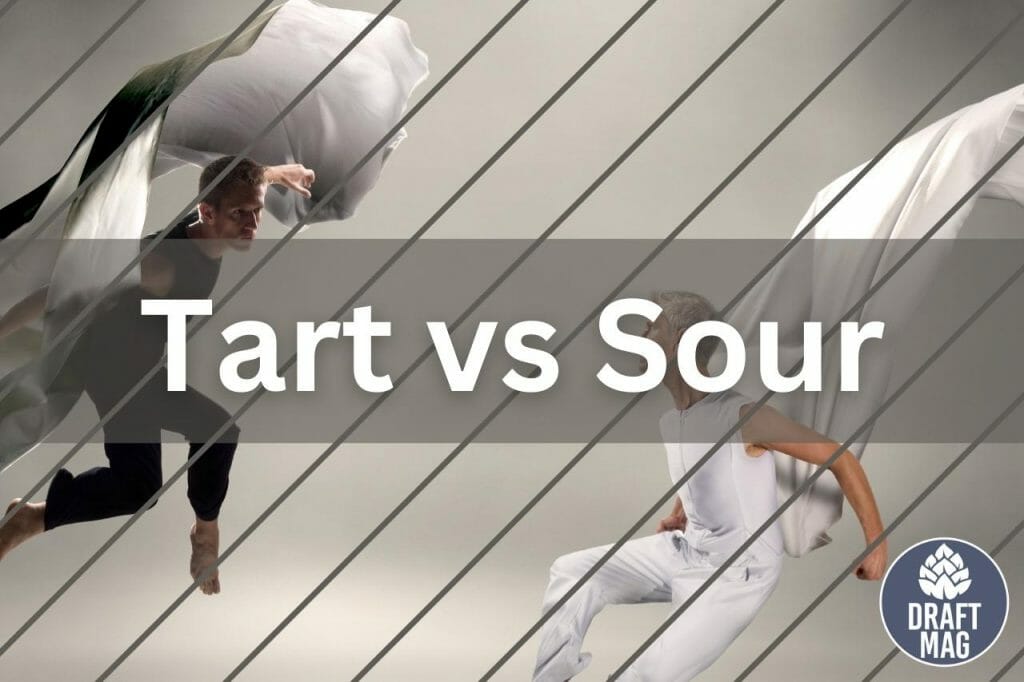 What Are the Differences Between Tart and Sour?

The main difference between tart and sour is that tart means a very sharp taste and mouthfeel that can be bittersweet, while sour is an acidic and strong taste shifting to bitterness. Tart has a mild intensity of acidity, while sour is more intense.

What Are the Characteristics of Tart?

The characteristics of tart are a taste that is sharp and acidic. Tart can be used to describe beverages like beer and is usually less acidic and a bit sweet. Additionally, you can describe tart as the flavor of adding sugar to something sour, like lemons.

Tart is a combination of the taste and mouthfeel when drinking alcohol. The taste will be sour and slightly bitter, while the mouthfeel of a tart beer will be dry and astringent. It will dry out the under front teeth. Tart can also be defined as mildly sour, but it fades quicker than a sour drink.

Tart beer offers acidic flavors; however, you can also use tart to describe the first punch you feel when you drink an acidic or sour beer.

The tart is not a savory feeling or unpleasant to the taste. It can even feel sweet, except that the flavor will be sharper than sweet, but not too tangy that it is considered sour. Tart has a dry and biting character in the beer, with a cleaner taste and residual sugar.

As for cheese, tart beers will pair well with cheesy and full-mouthed cheeses like the mascarpone, double-cream brie, or Burrata. You must keep in mind that it’s always best to go with sweet foods when having a tart beer, to bring out the notes of sugar they already have. This can also lessen the lactic and dry character.

Tart flavors are used to describe the lactic character of beers like a Berliner Weiss. The wheat-forward beer is dry, tart, and refreshing and will remind you of sweet apples and lemons.

Fruity ales can also be described as tart if they have a balance of sour and sweetness in their flavor, with a dry and astringent mouthfeel. These include beers with the flavor of berries and apples. Some American wild ales are categorized as tart, along with beers like Oud Bruin and Flanders Red.

Tart can be defined as sharp or bitter when it comes to beer, but it can also be a sharp taste. When something is tart, it is not usually bitter because of the slightly sweet flavors that are balanced with the sharp tanginess. The tart is not the same as any other taste because tart is milder and more drinkable.

What Are the Characteristics of Sour?

The characteristics of something sour are acidic, strong, and sharp. Sour beers usually taste and smell rancid because of fermentation and have a higher level of acidity than tart beer. This makes them feel rough and prickly against your palate when you drink.

The sour flavor can be used to describe lemons and vinegar or even beer and milk that has gone bad. When something is sour, you can recognize it in the flavor and the aroma because it will smell strong and sharp. In general, sour is a stronger flavor.

The taste of sour will linger for a longer time and tastes stronger than something that is less acidic. A sour flavor will enter into the aftertaste. Sour is prickly and slightly bitter and is not always pleasant to drink. Sour beer is often seen as an acquired taste.

Aside from the intense acidity, sour can also be used to describe beer that is spoiled or infected. When a beer tastes sour when it’s not supposed to be, it has gone bad. A spoiled beer shows unpleasant sour and funky characteristics and will be unpleasantly dry.

Try out fruity dressings on crispy green salads and smoked meats or pork with a fruit compote whenever you’re having a sour beer. These dry lambic beers are ideal for different kinds of intense flavors, so don’t hesitate to bring out the hot sauce. You may want to check out Indian curries and spicy Mexican food.

For the cheese pairing, try out funky and stinky cheeses like goat cheese and bleu, along with fresh fruits like berries. Mussels, salmon and other seafood will also go well with beers of this style. Sour beers go well with fruity desserts like a sorbet or a fruit soup.

Sour beers are those that have a more complex sourness in flavor and aroma. A good example of a sour beer is a Belgian Lambic, which tastes dry, cidery, and vinous, with a sour aftertaste. Other lambic beers are also sour, although some can be mildly sweet, which makes them tart.

A Gueze beer is another type of sour lambic, which blends old and young lambic together for a stronger and sourer taste. Another good example is the Gose beer, which is a warm fermented beer brewed with lactic fermentation. Gose beers have lemon sourness and a salty taste.

Beers can get sour after a while because of spoilage, particularly during the summer months. The yeast and bacteria in beer are more active at higher temperatures, which causes the beer to become spoilt and gives it a distinct tangy taste.

When a beer is spoiled, it gives off a strong sour and vinegary aroma that prickles the nose, and this will go into the flavor. The beer will have a flat, off-flavor, and dull taste if it is stale, while skunked beers have a stronger and more sour character.

Keep in mind that a spoiled beer being sour is not the same as a sour beer itself, which is brewed to taste that way. Sour beers are deliberately infected with other microflora, while spoiled beers have bacteria and yeast that are out of control. If your beer tastes sour when it’s not supposed to be, you should avoid drinking it.

When a beer is sour, it is one that has been fermented with acid-producing bacteria. Some of these bacteria include pediococcus, lactobacillus, and acetobacter. The bacteria will feed on the sugars in the beer and excrete organic acids, which makes the beer taste acidic and sour.

– Is Tangy the Same as Sour?

Tangy is not the same as sour, even if they are usually associated with each other. When you say tangy, the flavor is sharp but can also imply that the food or beverage is sweet, making it better as a tart taste synonym. But sour leans towards bitter instead. Tangy is the flavor of sweet lemon juice or the smell of sea air.

– Are There Similarities Between Tart and Sour?

The main similarity between tart and sour flavors is the acid, although the former has less acidity than the latter. Both will give you sharp flavors, too, with the intensity being different when you compare them. But, it’s understandable that both are confused about each other.

As covered in our article on tart vs sour, the two tastes are very similar and are often confused for each other when defining beer and wine, but they also have differences. The main difference is that tart combines a sour flavor with a dry and astringent mouthfeel, while sour is a basic taste of something sharp and highly acidic. Sour is a subset of the tart flavor.

If you have something tart, you might notice hints of sweetness along with the sharp, tangy flavor. But sour beverages usually lean towards bitterness, as they are sharp and acidic. Sour can also be used to describe spoiled or infected beer, which has yeast or bacteria that have gotten out of control.