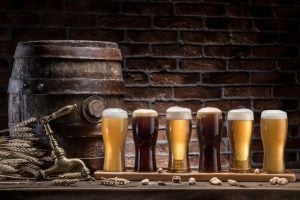 Craft beer vs domestic beer: if you are wondering which one to buy, this article gives you all the facts to make an informed decision.

Did you and your friends decide to have a pajama party, with beer of course? It is easy to throw a late-night party if you know what type of beer to get on the shelf. You should not waste time deciding on the type of beer to complete your party: we will make the right suggestion for you and your taste!

Some will say that it is just a beer. We will admit that, as long as there is a beer, then the party will never stop. However, these two beers are very different from each other. It might make or break your experience if you choose the wrong one.

– What Is Domestic Beer? 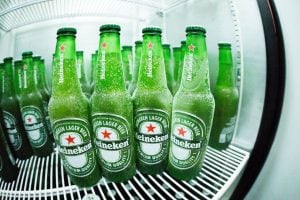 It is easier to define what craft beer is if you know exactly what domestic beer is. Some people call it a “regular beer,” and includes very common brands of beer such as Budweiser, Busch, Heineken and Corona, to name but a few. These are macro breweries that are mass producing beers using cheaper ingredients.

Every country might have its mass-produced beers, but with the term “domestic” we usually refer to American brands.

These domestic beers are bottled as fast as possible to reach the market. These large breweries are less likely to get premium ingredients for mass production, substituting them with lower grade malts, grains, and hops. To make it simple, domestic or regular beer is watery, pale, and low in alcohol by volume (ABV) or opposite of craft beer.

– What Is Craft Beer?

Now, let us talk about craft beer. For a beer to be called a craft beer, it should use traditional or local ingredients. These ingredients are yeast, grains, malts, and hops. Other ingredients can be added to the brew, but only for flavoring purposes. As soon the brewery adds something to lower down its cost, that brew can no longer be added to the line of craft beers.

Moreover, craft breweries only have a 6 million barrel limit every year. On the other hand, not all craft beer-producing breweries are microbreweries. So, what is the real difference between domestic and craft beer?

A craft beer takes the name of “special beer”: as such, it uses traditional recipes. The processes they are using are way back when humans first started to brew beers. This means craft beers are not mass-produced and use a strict recipe.

What Are the Major Differences Between Craft and Domestic Beers?

The obvious major differences between domestic and craft beer are taste, appearance, and the quantity produced. The following is a summary of how to easily distinguish between a regular and craft beer.

Appearance: Craft beer ranges from light shades of colors to darker shades depending on the ingredients. Also, it does not have a lot of carbonated bubbles, that is why you can easily see its clear appearance and notice its crisp taste. Domestic beers are just pale in color.

Taste: Another dividing factor is taste. As mentioned above, domestic beers use low-cost ingredients and lack a rich flavor. The reason is because of the strict competition between macro breweries. Each large brewery wants to offer the best and cheapest price possible. As a result, regular beer has a bland and plain taste. Oftentimes, it has a sour aftertaste because of the low-quality ingredients.

There are different varieties of grains used for craft beers such as rye, wheat, oat, barley, malt, and many more. The quality of taste is not only due to the ingredients but also the process involved in making a beer, which needs to be quick and replicable on a mass scale.

– Domestic vs Craft Beer: Which One Tastes Better?

Many avid beer drinkers will tell you that you are missing half of your life if you haven’t tasted a craft beer. Domestic beers are similar in flavor or have a monotone taste, and have to be served very cold to be appreciated. On the contrary, craft beers are peculiar in flavor and are served not very cold, between 50 to 55 degrees Fahrenheit, so you can distinguish the unique flavor.

These craft breweries are not mass producing billions of barrels per year. They are not after the quantity, but the quality of taste they produce for each batch. Producing non domestic beer takes time to ensure that the result is an unforgettable experience for the consumer.

– Is Craft Beer a Healthier Choice? 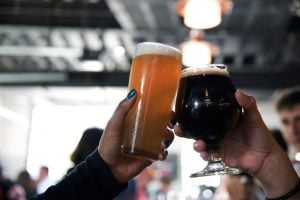 Most macro breweries nowadays produce low-calorie beers as they are very keen to jump into the bandwagon of healthier lifestyles. The truth is that it is just a little more than water.

On the contrary, craft beers are full-bodied beers, with different layers of flavors that tickle your tongue. That is why these beers have more calories than regular beer. But it doesn’t mean that domestic beer is a healthier choice. The nutritional profile of mass-produced beer does not match with craft beer.

The reason is because of its higher alcohol content. You will not be able to drink as much as you would with a regular domestic beer. Therefore, you automatically cut down on calories.

Another reason is that craft beer reduces the risk of heart disease and type 2 diabetes, according to published researches. Additives are bad for your health, and this is what you will find inside domestic beers to cut costs: is it really worth the risk, just to cut a few calories?

– A Tip for You: Always Read the Label!

It is good to carefully read the ingredients to know what’s in your beer. Most likely, additives are present in mass-produced beers, while craft beers are most of the time free from additives. If you are a health-conscious individual, reading the ingredients can help you come up with a good decision.

Another factor is the shelf life, a typical beer has a 6 months shelf life date, but longer means it has more additives. The alcohol content is also an important factor for many in choosing a beer. Normally, beer has 3 to 14 percent alcohol content.

– What About the Price?

A huge difference that you will surely notice is the price. When you compare craft beer vs domestic beer, craft beer is a bit costly than a regular one. It is because of the high-grade ingredients, longer brewing time, and labor-intensive process required for producing it.

Maybe you are thinking, “Is the cost worth it?” The answer is, definitely, YES! Domestic beer characteristics fall short when it comes to the flavor profile and nutritional advantages.

Furthermore, it will be much cheaper to produce your craft beer at home. There are hundreds of recipes that you can use to easily set up a home brewery. If you are planning to sell a craft beer, then it is better to buy ingredients in large quantities, as it is another way to cut the costs.

A Personalized and Interesting Approach to Selling

You will notice that each craft beer brand has a unique branding. Aside from that, it offers a lot of information on its label about its origin and the reason behind the creation of that specific flavor or brand of beer.

If you are thinking of buying a personalized gift, you might want to consider a craft beer. It is possible to find a specific flavor that the receiver loves. One of the main reasons why people choose to drink craft beer despite the price is because they feel that it is made just for them.

In the United States, there are many breweries. There is a huge chance of finding a craft brewery in your area. You can find breweries that can craft beer according to your taste and preference. It is surprising to find out that they can make your personalized favorite beer and see to what lengths they go to make it tasty for you. It is impossible to have this personalization with a domestic beer, as it is mass-produced.

Similar to wines, craft beers are a bit expensive because they are made to pair with a certain type of food. It is becoming popular to pair beer with a 3-course meal, just like you would do with a bottle of expensive wine. Therefore, you can level up your dining experience and make an unforgettable date out of it. The advancement in beer making, plus the traditional way of making beer, made it possible to create a unique taste suitable for any type of food.

The conclusion behind craft beer vs domestic beer comes down to its overall quality. The major factors that influence beer characteristics are ingredients and production methods. It all depends on your personal choice when it comes to taste, appearance, and price.

Craft beers focus on the uniqueness of taste and the quality of beer, while domestic beers focus on making sure that their products are affordable for the general public. 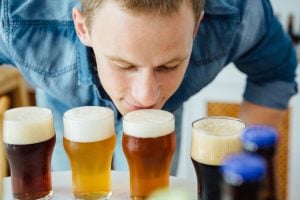 The regular beers lack a defined taste, while craft beers are bursting with flavors. Great flavors come with high-quality ingredients, and it directly affects the price and the number of calories.

Now that you know everything about craft and domestic beers, the choice is all yours. It is good to choose the type of beer according to time, occasion, and personal choice, so you will never go wrong. Additionally, take time to ask your friends and family about their personal choice.