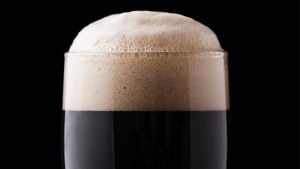 Guinness draught vs extra stout is the two most popular beer labels that often confuse people. There has been a continuous debate between beer enthusiasts regarding their strength, appearance, and taste.

Let’s understand the difference between Guinness extra stout and draught in detail.

What Are the Differences Between Guinness Extra Stout and Draught?

The main difference between Guinness Extra Stout and Guinness Draught is the brewing process (carbonation) that changes their resultant aroma and flavors. Although both Draught and Extra Stout are made from similar ingredients, Guinness has a more bitter taste, more robust flavor, and higher alcohol content, causing potential hangovers than Draught.

What Is Guinness Extra Stout Best For?

Guinness Extra Stout is best paired with savory dishes like baguettes with cheese dips and mashed potatoes to grilled meats. Decadent chocolates and oysters are also staples to go with this pint.

The Guinness extra stout is entirely a different pint compared to other Guinness innovations as it is made of the finest quality of Irish barley, malt, and hops.

The black-colored beer is visibly bubbly due to the carbonized content. It has a peculiar bittersweet taste that most beer experts call crisp and sharp. Guinness stout’s medium and balanced aroma has a full-bodied, rounded, and roast character flavor that may not be appreciated by all.

It has a distinctive palette of subtle fruity notes from the fermentation and roasted barley. The refreshing taste is highly characterized by a hint of caramel that lingers in your mouth. However, one may feel a dry finish at the end.

Guinness Extra Stout Alcohol percentage sis at 5.6 percent. Its ABV is higher than other Guinness variants, especially if we compare it with Draught. It translates as 109 calories from alcohol from every 12 ounces or 355 milliliters of a standard pint.

Higher alcohol content means more chance of intoxication. The upper version of Guinness original/stout is Foreign Extra Stout that has a higher ABV – 7.5

Looked upon as the oldest beer form globally, Guinness Extra Stout is a complex beer full of character. Regarded as the carbonated variety of the original Guinness Stout made in 1821, it is the one that is brewed with more hops for longer preservation.

The ‘XX’ stout beer has a sharp, crisp taste that gives you an entirely different experience. It has a typical black appearance with a frothy head. Keeping the classic recipe flavors intact, the various bottle styles and labels have changed with time. The beverage is still manufactured at Dublin’s St James’ gate brewery.

Guinness Draught is best for being paired with meat pies, smoked meat sandwiches, and bread with cheesy dips. This drink also works well with tarts and baked fruit pies.

Guinness Draught is made from four essential ingredients:

These are then carbonized with nitrogen to produce the sweet and velvety Draught beer that you enjoy.

The moment you pour the rich red ruby-colored Guinness draught into your glass, you will observe the stormy surge of the pint that’s not bubbly at all. The rich, creamy head seen on the top of the dark beer adds a pleasant silky texture.

A lovely aroma hints at the sweet malt scent that arrives first to complement the roasted barley base. The combination also has notes of coffee or chocolate.

Overall, Guinness draught taste has a perfectly well-adjusted flavor that blends the sweetness of the malt with the hoppy bitterness of roasted barley. Thus, the palate is creamy, smooth, and balanced.

The ABV of Guinness draught is 4.2 percent. The Draught has a low alcohol level content in comparison to stouts. This is why people enjoy more of this drink with less risk and potential hangovers. Moreover, the calorie count is only 78 in a standard pint (12 ounces / 355 milliliters) of Guinness draught.

The iconic pint was first introduced in 1959 to mark the celebration of 200 years of Guinness brewing by Arthur Guinness. The beverage is sold mostly in pubs and is available in a can.

Draught is easily recognizable by its stormy surge when poured. The beer has a distinguished ruby red hue and creamier-smooth texture. This is because the drink is carbonized with nitrogen gas and carbon dioxide.

This shift in the traditional carbonation brewing (that only used carbon dioxide) was a significant development in the company’s history to date. The new product developed combining carbon dioxide, and nitrogen gives the Draught beer a different texture, flavor and builds the “surge” characteristic. 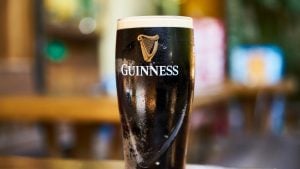 Both the products are made by the world-famous Irish brand, Guinness. The 300-year-old company founded in 1759 by Arthur Guinness in Dublin is primarily known for dry stout. Being Ireland’s oldest brand, it is counted best among dark beers with a unique creamy and smooth taste.

Health-conscious drinkers can consider it for its low-calorie count and calming effect. A pint of Guinness is tested to be rich in iron and antioxidants, adding to its good health features.

They were bottled and sold under different labels in about 150 countries worldwide. The popularity of the beer brand can be assessed by the fact that nearly 10 million glasses of Guinness are served every day all around the globe.

However, the two most marketable beverages – Guinness draught and Extra stout from Guinness, often leave hopheads confused as they look pretty similar but have a distinctive variance in terms of palate, aroma, alcohol content, and taste.

How To Pour a Guinness

To produce a consistent pint of Guinness every time, you need to follow these two-part pour steps for a perfect taste and visual presentation:

Pro tip: If you see the white froth in the glass after you have finished your drink, your pint of Guinness has been poured correctly.

– How Long Does a Can or Bottle of Guinness Be Kept in the Fridge?

Not only Guinness but any unopened beer can stay up to six to eight months in a refrigerator at the best quality. However, if stored at room temperature, the shelf life is reduced to four to six months.

– Is the ABV of All Variant of Guinness Beers Same in Every Country?

Not necessarily. The amounts of alcohol (permissible) limits differ from country to country. The company has confirmed the regulatory norms of every country, and hence they have to adjust their alcohol levels accordingly. Also, the ABV levels have to be adjusted as per the particular climate in the area.

– How Much Time Is Taken To Pour a Perfect Pour of Guinness Draught or Extra Stout?

Experts say that it usually takes about 119.5 seconds to pour a perfect glass of Guinness pint.

– Does a Canned Beer Taste as Good as Draught in a Pub?

No. Any canned beer will not taste as good as beer poured from a draught. Guinness draught is primarily served in a draft in a pub and is much thicker. The creamy head that you get from the tap is incomparable. Despite that, the canned packaging still does a good job. 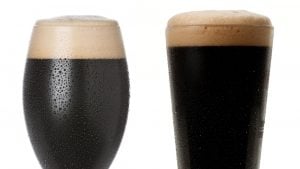 If you are not a regular boozer and not sure which beer to choose, we recommend you select Draught Guinness as it’s more enjoyable. You can take a few extra sips without any worries. On the other hand, if you like strong and high alcohol content lager, then Guinness Extra Stout should be your pick.