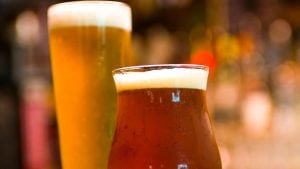 The pilsner vs lager debate isn’t easy to settle as these are popular beer types. Plus, many people get them confused since they have many similar characteristics.

Did you realize, though, that a pilsner is a specific sort of lager?

There are more types of beer than you may think, each with its distinct scents, tastes, and colors.

What Are the Differences Between a Pilsner and a Lager?

The main difference between a pilsner and a lager is their type: pilsner is a type of lager. However, because lagers are conditioned at a low temperature, not all lagers are pilsners. The yeast and the use of hops in pilsners are the main differences between the two.

Pilsner is best for pairing with fish, poultry, or roasted pork. German pilsners are paired best with Indian or Mexican foods and most Asian cuisines. Pilsners are also best for beef dishes, fish, and chips; plus, it goes well before a meal.

Pilsners in the Bohemian style aren’t the ideal choice for spicy dishes. Instead, they’re great with milder Thai and Indian meals, as well as most Chinese and Japanese dishes. Sushi is a fantastic alternative, however not much with German Pils. Don’t forget to select the appropriate beer glass for each variety to enhance your drinking experience.

Pilsner is a delightful, palate-cleansing, thirst-quenching beverage with many unique features. Keep reading to discover more about its characteristics.

Most pilsners contain between four to six percent alcohol by volume. 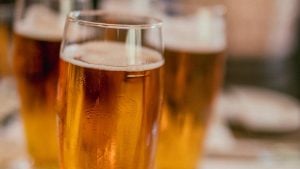 Hops with a hint of graininess can be present in the fragrance.

The taste is straightforward, with few grains and hop bittering and a crisp, refreshing finish. Pilsner Urquell is also popular among beer drinkers because of its creamy white head, powerful hop scent, natural carbonation, and somewhat buttery flavor.

The main ingredients in pilsner beers are pilsner malt and bottom-fermenting lager yeast. You just need some spicy hops and light-kilned malted barley to brew pilsner. This combination of ingredients results in a clean, straightforward beer.

Pilsner is a beer recognized for its light, golden appearance, and pleasant flavor. A pilsner’s head is thick and white, while the body of the pilsner is always straw-colored.

Here are some of the most popular Pilsner varieties:

Bohemian pilsner is more closely related to the roots of the “pilsner family” than any other. This style dates to 1842, with “pilsener” referring to a Czech appellation. Pilsners made in the Czech Republic are darker and have higher final gravity than those made in Germany.

Bohemian-style pilsner features a spicy hop flavor and a great, rich, nuanced maltiness. The malt flavor of the Bohemian pilsner is slightly sweet with a toasted, biscuit-like, bready malt taste. It helps balance the hop bitterness, resulting in a more balanced, well-rounded beer. Hop bitterness is medium and tastes low to medium-low.

Try the German mix if you want something with a little more body than a Czech pilsner. A German pilsner flows clean and bright, with a crisp cracker flavor that is somewhat bitter. The beer is lighter and thinner in color than its Czech equivalents, thanks to the German hops such as Hersbruck and Hallertau.

It has a malty sweetness, which comes through the fragrance and flavor. Hop bitterness is medium to high. The scent and flavor of noble hops are mild yet noticeable. The beer is straw-colored with superb clarity and a large, frothy white head. It has a “clean” flavor that’s more refined and steady than Bohemian pilsners.

American Pilsner is light-hopped, crisp, and full of character with aromas of nectar and citrus fruits. These beers, also known as American pale lager, were first made by German immigrants.

It developed a distinct sub-style by adapting pilsner recipes to include elements local to America, like North American hops and maize. These have a smoother flavor (often called “watered down”).

Pilsner is a light-hopped pale lager with a refreshing, crisp flavor. Pilsner beer has a long history that dates back to the British invention of the kilning procedure in the 18th century. It was first brewed in the Czech Republic, in the town of Pilsen (Plzen).

Pilsner-style lagers have a spicy taste due to this noble hop character.

This style of beer was popular among German immigrants, and it quickly spread throughout Europe, Germany, and the rest of the world.

The bottom-fermented brew with gently kilned malted barley and the average alcohol content is the most famous beer type.

What Is Lager Best For?

Lager is best for pairing with pizza, burgers, and standard fast food staples. They also go well with roasted chicken, Mexican cuisine, heavy chilis, beef stroganoff, and macaroni and cheese. In hindsight, lager beer is an excellent choice for many meal pairings.

Bocks are great with spicy dishes and chocolate desserts. American lagers are well-known for pairing with barbeque classics, while other well-known lagers pair well with food from their own countries.

Here are the features of lagers:

It has a reduced tolerance for alcohol and can ferment mebilose, a sugar that top-fermenting yeasts cannot ferment. The average pint of beer has roughly 4.5 percent alcohol, with most light lagers in bars being between four to six percent. 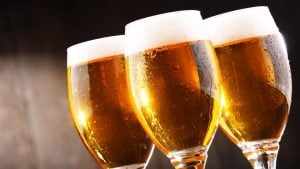 Lagers often have a mild, crisp flavor that is mellow and pleasant. They also have higher carbonation and are less bitter than ales.

With a reduced alcohol concentration, they tend to be considerably lighter and cleaner in appearance.

Lagers have a sweeter, smoother, and more refreshing flavor than ales. Other flavorings, like malts and hops, might be added.

All beers include the same ingredients: malt, water, hops, and yeast. Other components, including fruit flavorings and various grains, including wheat, have been added to create hundreds of distinct types.

Lager is brewed at low temperatures and is noted for its light and refreshing flavor, along with its light or dark brown color.

Lagers come in various hues, including amber, white, black, and dark brown. The color intensity is due to the grain used in the brewing process. The yeasts employed in its production determine its flavor.

The following are some lagers:

Amber is a word used in the United States to describe a variety of beers with varying colors. Amber beers are translucent when contrasted to lager beers. In the past, Ambers were thought to be associated with Pale Ales, but they gained their own identity in the twentieth century.

Amber lagers have a medium body and a toasted or caramel-like malt flavor. The bitterness of hops can range from very mild to quite strong. Brewers may generate enhanced tastes by using decoction mash and dry-hopping. These beers are sweet and sharp at the same time, thanks to a unique hop combination. They employ colored malt, which gives them a unique flavor.

Pale lager is a light-colored, golden beer with a well-attenuated body and noble hop bitterness. Dry, clean-tasting, lean, and crisp are characteristics of pale lagers (due to acidity from the forced carbonation). The flavors may be delicate, with no traditional beer ingredient overpowering the others.

Noble hops have a variety of hop characters (bitterness, flavor, and fragrance) ranging from minimal to dry-bitterness. Water, Pilsner malt, and noble hops are the key ingredients, while some brewers use adjuncts such as rice or corn to lighten the beer’s body.

Bock is a rich, strong beer that dates back hundreds of years to the Einbeck region of Germany. Bock is a bottom-fermenting lager that requires months of lagering (cold storage) to level out the bitterness.

In general, bock beer is stronger than lager, with a rich malt taste and dark amber to brown tint. Hop bitterness can be robust enough to balance, but it shouldn’t overpower the malt flavor, which is why most beers are relatively lightly hopped.

Lager is a cold-brew beer style, which can be light or dark in color. Lager is classified as a cold brew beer since it is conditioned at low temperatures. Since the yeast ferments at the bottom of the storage container, the fermentation in lager is known as bottom fermentation.

Though it’s a remarkably varied bunch, the bottom-fermented procedures used to brew it result in a crisp, pleasant beer. Other well-known beers, such as Busch Lite, Budweiser, Coors, PBR, and Miller Genuine Draft, are lagers.

Ales and lagers are the two most common types of beer. The difference is due to the yeast utilized during the fermentation process. Lager is the most popular beer style in the world. 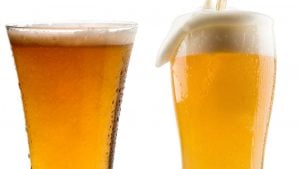 Each beer style has its own set of advantages and disadvantages. It’s up to you to decide which beer you’d like to drink next time. Find a beer that appeals to you and savor the flavor explosion in your mouth.