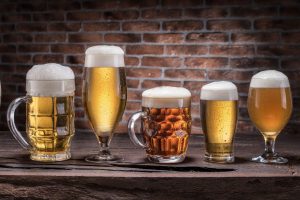 The craft beer vs. microbrew is one of the most popular arguments among beer lovers and enthusiasts. Both terms have been used a lot interchangeably, even if they have different meanings. This confusing argument can be easily put to rest by identifying what craft beers and microbrew beers are and their differences. Let’s start by defining what they mean, and then continue reading to have a full description of their characteristics!

What Do the Terms “Craft Beer” and “Microbrew” Mean?

Microbrewed beers and craft beers are often confused because they are sometimes used interchangeably, even when they have different definitions and features. Even if they have their similarities, they are also different.

Craft beer has become very popular among beer lovers because of the name “craft.” The primary definition is beer made by a small brewery in a traditional or non-mechanized way. These small breweries usually perceive their commitment to beer making as more of an art than a job. Also known as craft breweries, these establishments are usually small-sized and independent, focusing on building a relationship with their customers and the quality of their beer.

Because of this, customers are more attracted to them than large beer companies. Since craft breweries have a lot of pride in their entire brewing process, including their ingredients and machinery, they make only small batches, focusing on high quality. This certainly sets their products apart from other mass-produced beers.

The Brewer’s Association, which emerged in 1978, described a small, independent, and traditional craft brewery. Then, craft beer is a beer made with traditional or innovative ingredients, also decided by most associations. These ingredients include barley, hops, yeast, malts, and the like.

On the other hand, a microbrew beer is made by a microbrewery. These breweries make specialty beers, which can be brewed on demand for a special occasion, event, or season. It can also be made to show off the company’s unique or new ingredients.

A microbrewery is defined based on how many beer barrels it produces in a year. This is 15,000 barrels, which is way higher than craft breweries. Also, 75 percent of the microbrew beer is sold outside the brewery at off-site locations, while 25 percent is sold in the brewery. This is the definition given by the Brewer’s Association.

Even if most of the beer has to be sold outside the brewery, many companies have small testing rooms or open up their taprooms for customers to explore. Thus, you would find many microbreweries that act as a restaurant, a pub, or a bar.

The microbrewery can cut costs anyhow it wants and does not have to follow strict rules during brewing. They are more of a business than a company to showcase skills and art, although this doesn’t mean that their beers aren’t good. There’s a good chance that most of the beer you drink is made from microbreweries.

What Is the Difference Between Craft Beer and Microbrew Beer?

When comparing craft beer versus microbrew beer, you would notice that the main difference is the type and volume of beer produced. They are usually confused with each other because a microbrewery can also be a craft brewery as long as it meets the standards. Here are the main differences.

– The Volume of Beer Brewed Yearly

The first and most distinctive difference between craft and microbrewed beers is how much beer is made yearly. Both types of breweries have a limit placed on the amount of beer they can make annually. 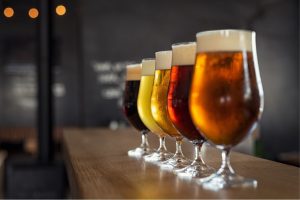 Another difference between these two breweries is who they can be owned by. A craft brewery, by definition, has to be owned for more than 75 percent by the company itself and less than 25 percent by other large brewery companies. This is important in ensuring that the company can focus on its art and quality rather than profit.

On the other hand, a microbrewery can be owned by anyone who can buy shares of the company. There are no restrictions to the ownership, as the company aims to profit.

– Types of Beer Made

This isn’t to say that their beers are necessarily very different in terms of quality, only that the process, ingredients, and focus are not always the same between craft breweries and microbreweries. Craft beer is meant to be made traditionally, with innovative and traditional elements. There are no preservatives, and it is just unfiltered, fresh, artsy beer.

But in the case of microbrew beers, they change based on seasons and special occasions; hence you get the specialty beer. Since they make a lot of beer annually, they don’t focus on the traditional way but leverage technology, automation, and machinery when making their beer.

One of the strict rules found in the case of craft beers is that they can’t change their brewing process except for a better flavor. If they do, then it’s not a craft brewery anymore. But, you don’t see the same strictness exerted on microbreweries.

– Where the Beer Is Sold

Another way microbreweries differ from craft breweries is in the case of where their products are sold. Craft breweries aren’t given any restrictions on where they can sell the beers. But with microbreweries, 25 percent of what they have must be sold in the brewery. This gives them the chance to open up their taps and testing rooms to customers, offering a fantastic experience.

These breweries can also be designed to be a pub or restaurants to stand out even better. Then, the other 75 percent can be distributed to different stores for sale.

What To Expect When Getting a Craft Beer?

If you’ve had regular beer for a while and you finally want to drink a craft beer, there are a few things that you should look out for. Firstly, craft beers are made with natural malt, which means you have a robust texture, flavor, and dimension. They are also left unfiltered, with no added preservatives or chemicals. Some might even call them “real beers.”

Also, craft beers are served a bit warmer than typical types of beer, especially if you want to get the best out of them. The colder it is, the fewer aromatic compounds it has to offer. If you don’t know how warm it should be, know that the darker it is, the less chilled it should be.

What To Expect When Getting a Microbrew Beer?

Microbrew beers can be ales or beers and are also unpasteurized and unfiltered like craft beers. They are made with unique hops and malts, so their aroma and flavor stand out. Asides from the fact that they make specialty beers, which all beer drinkers are most likely aware of, there’s nothing different you can expect from a microbrew beer that you might not already know.

Other Types of Breweries

Here are some examples of non-traditional breweries, which are increasingly popular today, as customers do not just expect beer to be refreshing — they crave for the full beer experience.

If you’ve heard of craft beer versus microbrew, then you’ve probably heard a nano brewery too. This brewery makes even less beer than the microbrewery size per year. But there is no specific number of barrels to classify a company as a nano brewery.

Most industry-leading companies in the brewery world are classified as macro breweries. As you can guess based on the name, a macro brewery makes an enormous amount of beer. These companies can produce and distribute more than six million barrels per year, which is a huge step up for microbreweries. Their beer is mass-produced, so it’s cheaper than craft beers. 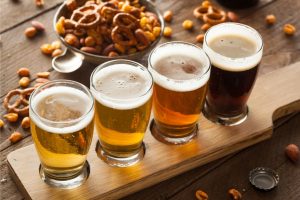 The essential difference between the microbrewery and craft brewery is that the latter is not usually the former. The microbrewery can be a craft brewery if it follows the required standards. The type of beer you prefer depends on your tastes and preferences, and you can choose the one that works for you after trying both types of beers. It doesn’t mean that you have to prefer one, as many people love both craft beers and microbrewed beers.