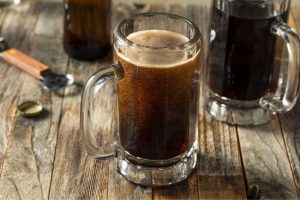 The birch beer vs root beer debacle needs to be settled once and for all. Although the flavors of these two varieties of beer are very similar, there are some differences. These beers would make excellent additions to your beverage list. In specific ways, their manufacturing procedures are also comparable.

In this article, we’ll highlight the similarities and distinctions between birch beer and root beer.

Birch beer, despite its name, isn’t a beer but simply a sugary, carbonated drink that originated in Pennsylvania. Commercial brands of Birch Beer started in the late 1800s after it was first manufactured at home by Americans.

The birch beer was brewed from sap tapped directly from the birch plant. But now, commercial productions employ replacements such as birch syrup, birch bark, and birch oil. They also use yeast to ferment the syrup and promote CO2 generation, which gives the drink its crisp texture.

A birch tree is native to North America, with various species and variants ranging from tiny shrubs to large trees. Birch tree bark may be stripped and utilized to extract essential oils. These are subsequently commonly used as flavoring.

Here are the main characteristics of birch beer:

Despite its name, birch beer is a non-alcoholic beverage. However, an alcoholic version is also available by fermenting the liquid with ale yeast. The carbohydrates in the beer will be broken down by yeast into ethanol (alcohol) and carbon dioxide, giving the drink a crisp texture.

Birch bark is the main ingredient in Birch beer. After brewing, it is this bark extract that gives the beer its color. You can make birch beer by distilling birch oil from the sap of the sweet birch tree. It is also possible to make birch beer from the oil, twigs, and root of birch trees. As a result, the flavor is distinct and immediately identifiable.

Birch beer flavor is minty and wintergreen. The birch beer taste has earthy, sweet, and creamy undertones, although it might taste peppery depending on if your recipe includes spices like nutmeg, cinnamon, vanilla, or cloves. However, if you have a pollen allergy, you should avoid birch beer since it might trigger a response.

The color depends on the sap, essential oil, or bark taken from the tree. In general, the hue ranges from brown to red and even white. The red kind has a milder texture, and the carbonation isn’t as strong. White birch beer, on the other hand, is a clear version with a distinct wintergreen taste.

In this section, our experts describe the process of preparing birch beer.

– Create the Birch Beer Base

You can brew Birch beer using birch oil. You may extract the oil from the bark of the birch tree or with dried bark.

A syrup, generally produced with brown or white sugar or other sweeteners, is required in addition to the birch bark. Brown sugar and molasses can provide color to your birch beer, providing it with a faint caramel hue. Vanilla bean, crushed ginger and star anise are also popular additions to birch beer.

The birch beer gets its carbonation from either carbonated liquid or fermentation. You can ferment birch beer by putting ale yeast into the base mixture.

When preparing the birch beer foundation, use less water if you are utilizing carbonated water. Instead of a sweetened liquid, make a heavy syrup.

If you use carbonated water to make the birch beer, you can serve it after cooling. If you are using yeast, instead, allow the mix to remain in tiny, sealed containers for 36 hours before measuring the carbonation level.

Refrigerate for two days before consuming after it is ready. When prepared with yeast, birch beer may last for about a month. Keep the syrup in a firmly sealed container and combine with carbonated liquid as required for beer prepared from the syrup. The syrup will last four to five months in the fridge. 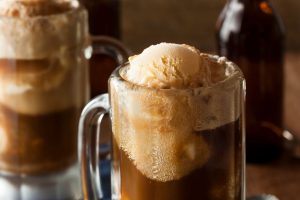 Root beer is also a carbonated soft drink. It is a traditional American beverage with a rich, herbal flavor. Brewers used to manufacture the beer by fermentation of herbal decoction, including sarsaparilla root, sassafras bark, and plants with yeast and sugar to produce a naturally bubbly, probiotic soft drink.

The entire plant of the sassafras tree, which belongs to the laurel family, contains volatile oils. However, nowadays, root beer does not include the ingredient due to various health issues with sassafras consumption.

If you want to brew root beer from home, stay away from any plants you aren’t sure about. Avoid using plants that have been treated with pesticides or contain safrole. Other herbal ingredients, such as wintergreen, cinnamon, and anise, may be present in your root beer. Most modern root beers come with artificial flavors and sweeteners. Some companies have even added caffeine to give their sodas a boost.

The root beer is available in a variety of tastes, depending on the other roots utilized. Since it contains a mixture of components, root beer is essentially tainted sarsaparilla. Both beverages are well-known and have a large following across the world.

Here are the features of root beer:

Root beer produced the old-fashioned way has 2 percent alcohol, but some add extra to make it a strong alcoholic beverage. Root beers with a high alcohol by volume (ABV) have been popular in recent decades. Not Your Father’s Root Beer is a well-known brand that makes this drink in various ABVs ranging from 5 to 19.5 percent.

Others include honey, vanilla, nutmeg and molasses, among others. The additional ingredients provide the right flavor, and the amounts may be adjusted to suit your tastes.

Root beer has a sweet flavor. However, you can also find a hint of acidity in commercial root beers from well-known brands, which adds some complexity to the overall taste.

Most businesses utilize vanilla extracts and other spices to enhance the flavor of the beer. The root beer taste and aroma can vary from one brand to the next.

Root Beer is brown. You can also find a blend of red and orange. Most brewers add a small quantity of black or chocolate malt to add color and taste.

To avoid introducing potentially hazardous bacteria into the mix, sterilize the bottles before you begin. Transfer the bottles to the refrigerator once your homemade root beer has reached the proper level of fizz, where it will last for about a month.

The first step is to make the root beer syrup. Combine the sassafras, sarsaparilla, and a vanilla bean that has been split in half and scraped to liberate the seeds with water and sugar. Boil the mixture and reduce to low heat for about 10 minutes, then soak the spices for two hours.

Fill a sieve with the syrup and put it over a big basin or saucepan lined with cheesecloth. Allow it cool before combining a third of the syrup with two-thirds of the seltzer water to produce root beer soda. Don’t forget to top it up with some ice cream!

The debate between birch beer and root beer will rage on for years to come. So, which do you prefer out of the two? Why do you think you would choose it for the other?

Here is the difference between birch beer and root beer. 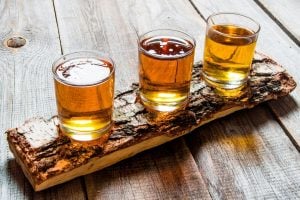 Although birch and root beer have similar tastes and histories, they also have significant variances. The principal component is notable since birch is used for one and a mix of roots and plants is used for the other. Birch beer is non-alcoholic, whereas root beer usually contains some alcohol. You can find them in drinks, sweets, and cuisine. They are both highly ranked, regardless of which one you choose.