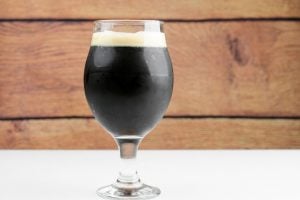 Our Guinness Extra Stout Review offers detailed information on Guinness Extra Stout. As a historic beer that has been around for 250 years, the Guinness Extra Stout is a beer like no other. Its heavy body, strong flavors, rich and dark color makes it stand out. From what it is made of to why you should try out the beer, we’ve covered all the details an enthusiastic drinker is looking for.

What Is Guinness Extra Stout?

Guinness Extra Stout is a traditional Irish dry stout beer that is a type of Ale. The Extra stout beer originated in 1759, at the brewery of Arthur Guinness in Dublin, Ireland. The beer has very creamy and rich flavors with well-balanced bittersweetness. Guinness Extra Stout bottle is available in 6 and 12 can packs and in 12 fl oz glass bottles.

The term “extra stout” refers to the brewing with more hops, that helps to keep stout beers good for a long period of time. The Guinness Extra Stout also has two other variants known as Guinness Foreign Extra Stout and Guinness Draught, each having a different flavor profile than the Extra Stout version. While the Draught version is creamy and smooth, the Foreign Extra Stout tends to be punchier with extra hops and a higher alcohol percentage.

The three main styles of beer Guinness offers are:

What Are the Ingredients in Guinness Extra Stout?

What Does Guinness Extra Stout Taste and Look Like?

The Guinness Extra Stout has a well-blended and rounded flavor of sweet and bitter. With a rich flavor of roast notes coming from the barley, this stout starts with a smoothness that ends in a dry finish. The noticeable fruity flavor and malt add sweetness to the stout while the strong hop characters add bitterness. The stout also offers a rich flavor of caramel, coffee, and toffee that are combined to give a crisp, refreshing and sharp flavor personality to the Extra Stout.

The Guinness Extra Stout is a carbonated beer that provides it with extra crispiness, thickness, and more of a hop bite than other beers. The stout has an almost black appearance that reveals a dark brownish-red color when observed carefully. It ends with an almost perfect foamy head. According to the official website, the Guinness Extra Stout beer’s color is ruby red.

Consumers who tried the Guinness Extra Stout mentioned that the stout had deep chocolatey flavors and felt unique. The dark beer leaves a sharp aftertaste that many drinkers may not prefer.

Here’s a side by side comparison of Guinness Extra Stout and Guinness Foreign Extra Stout: 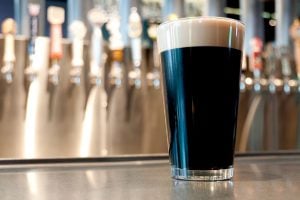 The majority of reviewers on the internet have praised and liked the Guinness Extra Stout, mostly because of its style and rich flavors. Many have mentioned that the beer has flavors of biscuit, dark chocolate, mocha, and the sweetness of malt. The smooth consistency and the similarity to the taste of original Guinness beer make it worth trying for those looking for a heavy and creamy Irish beer. Mostly, it finishes off nice and is easy to drink.

The drink starts with a sour roasty flavor that gradually turns creamy and tangy in the middle. Finally, the last portion of the beer has roasty, dry, and little smoky flavors.

How Do You Drink Guinness Extra Stout?

The right way to drink the Guinness Extra Stout is by first pouring it into a beer glass. The pouring method plays an important role as it should be done correctly to achieve maximum foam head. The rule of thumb while pouring the Guinness Extra Stout is to make sure that the glass bottle does not touch the beer glass in any way. The liquid should be poured gently in one go. Make sure you hold the bottle at a 45-degree angle while pouring slowly.

You probably didn’t know this, but the Guinness Extra Stout beer offers numerous health benefits that are absent in other regular beers. As the beer company advertises itself as “Guinness is good for you”, there is actually some truth to it. The beer contains antioxidants, iron, fiber, ferulic acid, B vitamins, and here’s how they are beneficial to your health: 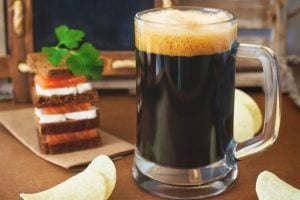 Dark beers are good for health which adds more credit to the already popular Guinness Extra Stout beer. The rich, toasty, chocolatey, and malt flavor of the beer, brewed in an Irish style, has strong flavors. Considering the moderate alcohol percentage, great taste, and favorable reviews, this beer is a must-try. And, wherever you are in the world, chances are you will find it!

Coors Banquet vs Coors Light: Who Wins This Beer Battle

Budweiser Review: Is This Beer the Finest Option for You?