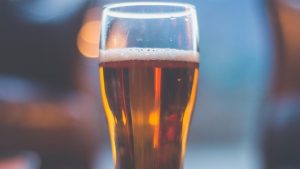 IPA vs APA is probably the most common comparison between the various pale ale styles. The American pale ale and the India pale ale have some related ancestry, so there’s no wonder why some people find it difficult to differentiate the two.

Keep reading to get all the necessary knowledge to be able to distinguish between IPA versus APA.

What Is the Difference Between IPA and APA?

The main difference between APA and IPA is their flavor and alcohol percentage: IPA is spicier and more alcohol-heavy, whereas the APA is lighter with a more prominent citrusy undertone.

Any beer lover will probably be familiar with the famous beer styles IPA and APA. Both beers belong to the hoppy ale category of beers according to the beer style guidelines.

Let’s take a look at each one of them separately in the following overviews:

IPA stands for “Indian Pale Ale” and its history dates back to the early 1800s when the British colonized India. It was noticed that when the beer was shipped down to India, it would usually get worse before it got there. So, naturally, the English soldiers in the country missed their home-brewed beer.

There was a need for an alternative, and the brewers had to do their experiments to improve the storage property. The brewers at that time found out an increase in hop added would make the drink keep longer. So, anything getting shipped to India would get highly hopped to survive the long voyage.

What About Double IPA?

Here, we have a more robust version of IPA with an aggressive hop flavor. It’s a bolder and huskier version of the IPA with extra bitterness. It is a popular beer style among craft beer lovers in the United States. A Double IPA can be very bitter.

However, the bitterness balances out with great hop aromatics and dry malt structure. Their alcohol strength by volume ranges between eight percent to over 10 percent, with IBUs between 65 and 90 percent.

This Indian pale ale has gained so much popularity over the years. It laid a foundation for several pale bitter ale styles today. Beers in this range have a unique hoppy style with a delightful taste.

So, let’s take a closer look at all of its characteristics below:

The brewing of IPA beers is such that it presents consumers globally with a good tang of alcohol. IPA beers are clear to slightly hazy with medium rising bubbles. The most prominent white IPA taste includes spice. The hop aroma is high with strong citrus-like and floral qualities.

The hop bitterness is also medium-high to very high. Moreover, you will find the ingredients in IPA beers to contain water, traditional hops, yeast, spices, pale malts, fruit juices, and citrus. Notably, some IPAs can be bitter, while others have sweet tastes.

Several brands of Indian pale ale cap their alcohol content to about five percent. Keeping such an average alcohol content will ensure that consumers can enjoy the alcohol impacts of the beer while tasting the various IPA ingredients.

However, some beers may have IPA alcohol content reaching up to 20 percent.

IPAs have calorific values that are fairly consistent with other popular beer styles. Typically, they contain about 180 to 200 calories per 12-ounce bottle. So, you could conclude that one bottle of IPA accounts for up to 10 percent of one’s average daily calorie consumption. 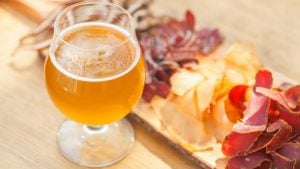 Indian pale ale also goes well with a wide range of foods, allowing you to combine it with your light lunch of salad and chicken. IPA beers also go well with a spicy tuna roll, blue cheeses, and seafood. If you also prefer to take your beer with persimmon rice pudding, then you should choose from the available IPA beers.

The common commercial examples of IPA beers are:

Several beer styles have changed over the years. However, the American pale ale continues to remain the balanced beer option for its fans. The APA is the original American craft beer, with its origin dating back to around 1980.

When creating the APA, the aim was to distinguish the American style pale ale from the European or British variant. When brewers looked for inspiration in the early days, they usually checked out classic styles made in the UK.

A lot of the early American brewers learned their techniques from the English. They tried to recreate the bitter English ales using the American Ingredients. This launched what we know today as the American Pale Ale.

These are the APA characteristics in more detail:

American pale ale has a moderate hop bitterness because the volume of malt contained is enough to dilute it. The clarity of these beers is slightly haze to clear while the carbonation is medium to fast-rising.

The hop flavor varies depending on the characteristics of the American hop used, and it could be citrus, piney, spicy, or minty. The medium to medium-high hop bitterness combines with the resinous aroma to give this beer style an exciting flavor.

The alcoholic content for the American pale ale ranges from 4.5 to 6.2 percent. However, many of the brands generally contain around five percent ABV. At the same time, the bitterness level varies from 30 to 45 International bitterness unit.

When it comes to comparing calories, there is not much difference between IPA versus APA. Therefore, you would expect a 12-ounce bottle of APA beer to contain around 170 to 200 calories, depending on the brand.

APA is among the most food-friendly beer styles you can enjoy. It goes perfectly with lighter foods like chicken and salads as a pale ale. However, this does not mean that you can’t enjoy it with a big bowl of chili. You can also pair it with cheeses like cheddar, plates of seafood like fish or steamed clams, as well as desserts.

We can attribute the American pale ale’s pairing abilities with food to its ingredients. The ingredients, including fermenting ale yeast, toasty pale male, and balance of healthy hops, are light. This allows the beer to clean your palate and prepare you for another bite of your meal.

Some of the popular commercial examples of APA beers include the following:

What Is Pale Ale: A Brief Overview of the Popular Beer Style

The renowned pale ale is golden to an amber color beer style that is hop-forward. This combines perfectly with a malty flavor to give exciting tasting notes. Beers referred to as pale ales have been around since the 17th century.

Brewers make these beers with significantly more hops than other popular beer styles. The addition of pale malt and ale yeast in their brewing helps them to bridge the gap between light lagers and dark stouts.

While they are quite more bitter than many other styles, they are also full of flavor. The flavor remains mild, softly hitting the palate, making this beer style an excellent option for beer lovers.

Just as the ingredients (hop) differ according to areas, each has specific characteristics that distinguish one from the other. Well, let’s start from the beginning.

What Is An ‘Ale’ and What Gave It Its Name?

‘Ale’ is a common term for warm fermented beer. The pale ale is a broader term covering so many styles of beer that are made from the fermentation of yeast and pale malt. The fact that the malt is dried with coke gives the beer its pale color.

Before this time, malts were dried over firewood until coke was introduced as fuel. During that time, the firewood gave the beers a dark woody color. The signature pale color gave it the name ‘pale ale.’

Moreover, there are different types of beer within the pale ale category. Among them are the famous IPA and APA, which we reviewed in this article. 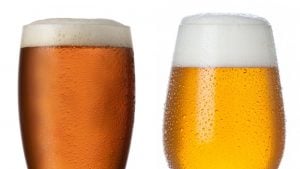 Now you must have a better understanding of these popular pale ale styles. IPA and APA are two of the most popular beer styles in the world. The India pale ale even laid a foundation for several pale bitter ale styles today. Moreover, we have covered enough grounds regarding IPA vs APA beer styles in our article, so let’s give a summary to help you narrow this information down:

IPA beers in this range have a unique hoppy style with a delightful taste, and their ingredients include water, traditional hops, yeast, spices, pale males, fruit juices, and citrus. On the other hand, the American pale ale may have flavors ranging between citrusy, piney, spicy, or minty. IPA beers often have their ABV between 4.5-20 percent. However, APA beers have alcohol contents between 4.5-6.2 percent. There is also not much difference between APA and IPA when it comes to caloric content. Their calories are usually between 180 to 200. So, whenever it is time for you to decide between IPA vs APA, return to this comparison and make up your mind with the information herein.