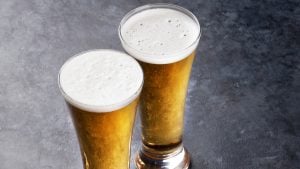 As the competition among the craft breweries and Mega brands increases, many brands lose ground.

However, the rising demand for low-calorie beer has come to the rescue of these brands.

These beers are best for people who seek an active lifestyle. Read on to gather all the information your taste buds need to decide between Michelob Ultra and Miller Lite.

Before we get into the difference between Michelob Ultra and Miller Light, let us first understand the styles of these two beers.

Here is a table stating the key differences between the two popular drinks:

What Are the Differences Between Michelob Ultra and Miller Lite?

Miller Lite is best for being paired with fried foods like burgers and fries, shrimps, and BBQs as its carbonation can cleanse your palate. Its slight maltiness also works with light-bodied cheese like mozzarella.

Miller Lite was introduced as a guiltless pleasure for consumers who are mindful about their health and wellness and continue to remain one of the top-selling low-cal beer alternatives.

Here are a few things you should know about this low-cal beer:

The original name of Miller Lite was Gablinger’s Diet Beer, and the formula was developed in 1967 by Joseph Owades, who was a biochemist working in Rheingold Brewery in New York. This formula was passed on in 1979 to Meister Brau, which led to the introduction of Meister Brau Lite. Finally, the labels were sold to Miller in 1972.

The launch of Miller Lite was a breakthrough in the beer industry. This was because it was the fad-diet era where people were looking for a low-calorie beer option in America.

Even though being the same beer, Gablinger and Meister Brau failed in topping the beer charts. But with a solid motto of “Great Taste… Less Filling!”,along with exciting commercials, Miller Lite changed the beer demographic. Its advertisement also included professional athletes such as Bubba Smith and Joe Frazier.

What Is Michelob Ultra Best For?

Michelob Ultra is best for being paired with light salads, grilled chicken or fish, and even citrusy desserts like raspberry cheesecake.

Often described as a once-in-a-generation beer, Michelob Ultra has essentially created its name for a top-notch American player in the beer industry, especially regarded as a trendsetter for low-cal, hydrating beer.

Here are a few things you should know about Michelob Ultra:

When Michelob Ultra was first launched in 2002, it was pitched to weight watchers with the motto of “Sip this beer if you want to ditch carbs.” With only 95 calories and 2.6 grams of carbs per serving, it became the first-ever brand to target the dietary enemy- carbohydrates.

Emerging as a “lifestyle brand,” people practicing disciplined wellness find it easy to integrate Michelob Ultra into their lives, all thanks to the on-point marketing. This fast success is attributed to its marketing strategy targeting atelic and calorie-conscious audiences.

Its strongest trait has been television ads that changed how people see beers for years. Michelob Ultra was advertised as an ideal post-workout much-needed hydrating drink, whether jogging or golf.

At that time, it was hard for people to imagine beer being advertised in a health and lifestyle ad. That is how Michelob Ultra capitalized on the increasing trend of an active lifestyle.

Lager is a beer produced from bottom-fermented yeast. These bottom-fermented lagers originate from Europe. Brewing was a winter work, and ice was used to keep the beer cool during summer, so came the name “lager,” which means German Lagern, i.e., to store.

When compared to ales, lagers are a tight category of beer. While ales have numerous styles, lagers are limited with specific characteristics of being light, crisp, and less bitter with high carbonation.

– What is a Pilsner Beer?

Pilsner beer is a corrected version of lager. It all began with a river full of beer. In 1838, the brewmasters of Plzen (Pilsen), Bohemia (now the Czech Republic) rolled out 36 barrels of spoiled ale and opened them into Main Square because nothing could mask off this spoilage. Beer spilled into the Radbuza River was officially undrinkable. 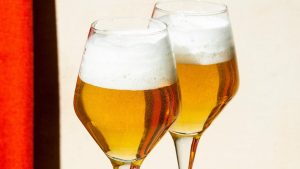 After witnessing their beer running down the street and into the river, the Bohemian brewers were ready for a drastic change. They hired a Bavarian brewer, Josef Groll, to teach them the German lager brewing method that will prevent the future spoilage of ales.

His solution was the introduction of Saaz Hops- the Nobel Variety of hops. These hops are what define Pilsner to this date.

With partially malted light and unroasted barley along with the addition of aromatic Saaz hops, Groll introduced a new recipe created explicitly for the Bohemians. Upon tapping the cask, a refreshingly clean and light beer came out, which is now known as Pilsner beer.

This palate-rinsing brew spread like wildfire globally, giving rise to other prominent Pilsner-style beers such as German and American Pilsner.

– Is Miller Lite a Lager or a Pilsner?

Miller Lite is a fine pilsner, not a light lager. People seem to miss this point while deciding their beer preferences as there is a vast difference. The German immigrants brought traditional techniques of brewing Pilsner in the 19th Century. Anheuser-Busch was the first brewery to use this brewing method.

It is pertinent to note that although American Pilsners are closer to the German ones, there are certain key differences. The classic American style Pilsners have less hop notes and bitterness with a medium-to-sweet malt flavor.

However, with the rising goodness of craft beer, the American Pilsners experimented with American hop to create a bold-flavored Pilsner to bring together an earthy tone with a little bit of spicy, fruity, and floral accents.

Miller Lite taste ranges from fruity to sweet notes of caramel with a perfect balance of hops and malts, proving that healthy beverages don’t need to taste and smell nasty.

With only 96 calories and 3.2 grams of carbohydrates per 12-ounce serving, this is a perfect beverage for a hang-out session with your friends.

– What Type of Beer Is Michelob Ultra?

Michelob Ultra is a type of beer that belongs to the style category of light lagers. A lighter version of the premium lager, light lager is low in alcohol and calories. Generally, rice or corn is used in the brewing recipe to give out this lighter version.

With a dry body and significantly less malty flavor, American-style light lager has fewer hops notes. In fact, the hops are only used to balance the brew.

The ABV ranges from 2.5 to five percent in American Light lager with a pale straw color and cloudy head. The craft version of light lager is created to refresh the palate without any assertive flavor and aroma and just a hint of a flowery note.

– What Is a Michelob Ultra Fridge+?

Michelob ULTRA FRIDGE+ is an interactive beer fridge. This concept revolves around the idea of a refrigerator-based workout routine with a state-of-the-art touch screen fridge that works on strengthening your core. Michelob Ultra also provides proper workout gears from Beerbells to Beer Foam Roller. 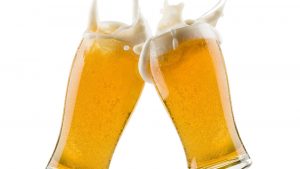 Clearly, the beer market has spoken with the surge in low-calorie beer consumption. With the increasing awareness about living a health-conscious lifestyle, beer drinkers are attracted to such low-cal beer alternatives that can keep you hydrated without having to compromise in taste.

That said, knowing what style of beer suits your taste palate can help you narrow down your favorite beer from these two beverages quite easily.

Both– Miller Lite and Michelob Ultra have marked their territories in the up-and-coming, low-calorie beer market. Though Michelob Ultra alcohol contents are just the same as Miller Lite’s, which is 4.2 percent, the choice depends on your taste.