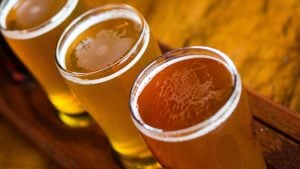 While it may seem a little too obvious on the surface, understanding the art of craft beer is much more intricate. But you don’t need to be a beer expert to know the difference between Pale Ale and IPA.

This article will provide you with a brief breakdown of IPA and Pale Ale and the key distinctions to look for.

Before we differentiate IPA and Pale Ale, it becomes necessary to go back to the basics of beer.

Many know that the surge in craft beer consumption and the consequent opening of craft breweries have given birth to different styles and flavors to the people. Among these, two craft beers have gained the most buzz among beer evangelists: Pale Ales and IPAs, which brings us to the discussion of distinction.

So, what’s the difference between these two?

What Are the Differences Between Pale Ale and IPA?

The main difference between Pale Ale and IPA is, Pale Ales have lower alcohol content, around five percent, than IPAs, which range from six to seven percent. Moreover, Pale Ales have a mild maltiness with citrusy taste, while IPAs give out a strong malt flavor with a hoppy to bitter taste.

What Is Pale Ale Best For

Pale Ale is best paired with cheese as its almost fruity undertones and aromatic hops blend deliciously with the tangy taste of the likes of cheddar. Pizza and Mexican food lovers will also find that this drink is suitable to cleanse their palates after consuming their favorite spicy delights. 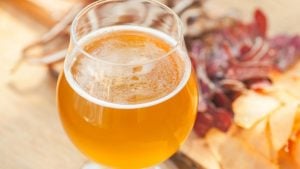 Pale Ale is a popular hop-forward kind of beer that dates back centuries. In the early 17th century, darker malts were used to brew dark-colored beer. It was only in the 18th Century; people began dry-roasting malt with coke, a type of coal.

This dry-roasting produced a light-colored beer which came to be known as Pale Ale Beer.

The original Pale Ale was created in England, and this style sparked the emergence of craft beer in America. Interestingly, the first advertisement using the term ‘Pale Ale’ that offered “light and excellent” beer was published in the Calcutta Gazette of 1784.

During those days, the term ‘bitter’ was associated with the taste of Pale Ale because of the addition of more hops.

Today, accompanied by a malty flavor, this beer bridges the gap between dark stouts and light lagers. They are light to medium-bodied, consistent, and well-made with low alcohol content. Pale Ale taste tends to be citrus due to the added hops, making it an easy drink.

There are plenty of styles under the broad spectrum of Pale Beer, from Belgium session ale to malty English style, well-balanced American brews, and hoppy IPAs, with each beer tasting slightly different.

The ale category is broad, including numerous beers such as Porter, Stout, Pale Ale, and India Pale Ale (IPA).

This traditional English-style ale is an understated beer. The flavor profile includes malty, woodsy, floral, and fruit accents. Scoring between 20 to 40 International Bitterness Units (IBU), it is a full-body beer with sparkling clear golden to almost copper color.

Relatively mild in hoppy flavor with tones of caramel and toasted malt is the best way to describe this session beer. With a copper color, the Belgian-style pale ales are influenced by the English ales.

The general rule for hoppier beer is that it should be slightly on the warmer side. Thus, Pale Ales are generally served at cellar temperature between 50 to 60 degrees Fahrenheit. Unlike most beers, this is not served “chilled.”

The typical choice is Nonic pint glass. A British pub standard, Nonic pint glasses are known for their bulge. The ridge of this glass gives the drinker a grip to hold the beverage and ensures it does not slip.

While pouring Pale Ale, the glass is usually tilted at a 45-degree angle and poured to that side of the glass, and is straightened to an upright position as it starts filling.

What Is IPA Best For

IPA is best paired with fish dishes like salmon, fish tacos, fish and chips, etc. The principle should always be that since IPAs have a strong hoppy to bitter taste, you need a lighter or citrusy snack. Any light fried food with a dash of lemon or even a dip of tartar sauce can work. Even veggies like asparagus and English peas will work magic. 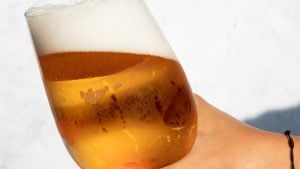 IPA is a unique beer made by British colonizers that can withstand tropical weather. It stands for Indian Pale Ale (IPA). Yes, there is an explanation in history behind the inclusion of “India” in its name. IPA beer was created by the British while they were colonizing.

The hot weather of India made it difficult for the British to brew beer. The intense heat sped up the fermentation process, resulting in an unpleasant change in flavors.

IPA beer is usually beer drinkers’ introduction to the diverse world of craft beer. Having been born at sea, IPAs have been explored and evolved to focus on aromas and flavor accents. Versatile in style, the flavor profile of IPA beer ranges from purely citrus to herbal and fruity notes.

The problem lies in the shipping of regularly consumed English beer, as it takes a lot of time, resulting in the infected or stale beer. A London brewery came up with a solution for this. George Hodgson, a London brewer, inculcated the two most essential ingredients in a beer—hops and alcohol. He decided to send an alcoholic beer loaded with hops. The results were a flavorful and aromatic beer.

There’s a scientific explanation for this too. Some kind of maturation occurred when the hops and added alcohol stewed in the ship’s hold. Due to the amount of oxygen and the consequent reactions, new flavors and aromas were invented over the extended period of shipping. Solving this problem gave the world new hoppy beers with intense flavors and aromas.

Here are a few commonly used IPA terms which novice beer connoisseurs should add to their vocabulary:

Often known as Double IPA, Imperial Pale Ale has a high hop concentration which gives character to the beer. To balance this fresh hoppy flavor, the brewers tend to use malts resulting in a high ABV of 8 percent or higher. When it is a triple IPA, the ABV is 10 percent and above.

This IPA is drinkable with a dash of sweet and the addition of three to five percent of hops. It is a fully flavored beer and has a top-notch aroma making it the best fit for repeated sessions.

Brewers usually combine several hop varieties to bring all the flavors in a beer, just like a chef puts multiple seasonings in your pasta. However, when it comes to single-hopped IPA, it is brewed exclusively with only one variety of hops. For instance, Citra hops are boiled to bring out the best flavor in Citra Single Hop IPA.

With a malty start and an assertive balance of bitter-sweet end, today the IPAs encompass numerous styles of beer, some of them are enlisted below:

Created in California in the 1980s with Northwest hops such as Cascade and Chinook hops, this beer begins with a fruity hop explosion and a rowdy, woodsy aroma and high bitterness. However, this bitterness is well-balanced with crisp body and carbonation.

This style is in trend now since it is unfiltered and significantly low in bitterness. Due to the blends of several hops, it has a fruity accent balancing the bitterness. It is fermented in low carbonation. This IPA is on the orange-ish side of the color palette with a fruity aroma.

When it comes to new trends, there is one attached with IPAs too. The word ‘soft’ is being used in reference to IPAs, thanks to oats. While the west coast IPA falls on the crispy side, these oats IPAs brewed with oat milk or flaked oats are all about a cozy mouthfeel with a bonus flavor of fruity hops.

Ales and Lagers: The Basics

The two most common words that often come up in beer conversations are ales and lagers. Generally, beers start as ales and lagers, and the variations in style and flavor entail these two basic beer categories.

This broad classification, irrespective of the color, flavor, or alcoholic content is highly determined by the fermentation method and the yeast used in brewing.

The table below provides an overview of the general distinction: 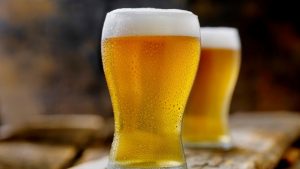 When it comes to craft beer, there are endless styles and flavors. Knowing the up-and-coming craft beer styles is the best way to figure out the beer that your taste buds like. While these variations often go unnoticeable if you are just for the drinking, that is not the case with beer aficionados.

Exploring craft beer is their mission, so much so that the peculiarities between different brews such as IPA and Pale Ale do matter a lot. Now that you can spot the difference between the two, you can pick your perfect partner for a relaxing night.