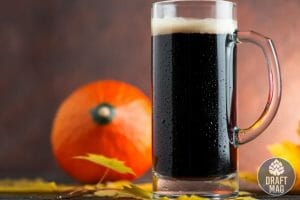 Porter vs stout is an age-old comparison that continues to this day. Even though both these beverages are velvety and malty dark ales and share a common history, there are a few differences of note.

In this article, we shall take on this popular comparison and outline the exact differences amidst many similarities.

What Are the Differences Between Porter and Stout Beer?

What Is Porter Beer Best For?

The Porter is best known for its top-fermenting ale first brewed in England in the early 1700s as a darker and stronger version of the standard beverage. This was due to the usage of a different ingredient than others, brown malt, distinctive darker appearance than most brews.

Porters are highly versatile beers when it comes to pairing. To start with, they go very well on their own due to the melange of mild and complex flavors. Food pairings vary depending on the type of Porter being consumed.

English porters pair well with grilled meat, gruyere cheese, or baked food items. While the American counterpart pair the best with chicken dishes. Generally, most Porters work exceedingly well with most meat dishes, a wide array of cheese, and almost any dessert you can pair them with.

When poured perfectly in a glass, the Porter is a dark ale even though it’s lighter than stouts both in color as well as alcohol content. Even though they lack Stout’s signature qualities, including its roasty and burnt flavors, it carries a wide array of aromatic notes.

Subtle hints of chocolate, coffee, and caramel would not go amiss with a glass of poured Porter. To summarize its appearance, Porter can be best described as an ale with a substantially malty dark body and a complex and flavor-rich character.

The earliest known appearance of the beer known as the Porter was in London in the early 1700s. The robust brown ale was designed to be drunk immediately upon delivery and gained a quick following among the parched workers of the city.

Additionally, it is one of the few beers whose name is derived from its first audience, which means, the porters of London that were tasked with delivering casks of the ale from the breweries to the pubs of the city.

Much later, the famous Guinness brewery in Ireland acquired this brewing style and added its spin to it. They were ultimately responsible for the signature dark color and the burnt taste of the Porter with the infusion of pale malt with a well-measured quantity of black malt to the original recipe.

Ever since its first appearance in England, and especially in London, Porter gained steady popularity among the street and river porters of the city that related to its less refined appearance and strong flavor.

Since its inception, Porter beers have developed individually in many styles and varieties worldwide. Some of them are listed below:

Irish Porter is perhaps the most well-known variant of the ale. Deliberation of the history of Porter in Ireland cannot be made without a mention of Guinness, which made it a worldwide name. Such was their devotion to the brew that they had eschewed all other forms of beer by the 19th century.

In Dublin particularly, a stronger version of the Porter came to be known as the Stout, while the standard variant came to be known as the plain Porter or just plain. Things changed in the early 19th century, as Irish brewers started being partial to pale or patent malt over the usual brown malt used elsewhere, most notably in England.

In the 19th century, the English Porter was exported from Britain to Russia as the Imperial porter. The Baltic Porter originated as a local variant of the same export, which was altered following local brewing standards and native ingredients. Baltic Porters started as warm-fermented ales, later switching over to cool-fermentation.

They have a high alcoholic content going as high as 10 percent ABV. Baltic Porters have managed to sustain their popularity over the years and are brewed across many countries outside of the Baltics, including the US, Russia, and Germany.

Porter crossed the Atlantic Ocean to reach the American shores in the 18th century, mainly across the northeastern US and states like Pennsylvania. The Americans worked their twist on the Ale, where it was brewed with lager yeasts that were already popular rather than following the standard process of top fermentation.

They also added several adjuncts to further differentiate the Porter, including maize, molasses, and Porterine. However, porterine was used to emulate Porter’s color and flavor profile by adding lighter beer worts.

The Porter was sold in Germany according to fermentation rules which meant the beer could only be sold in bottles containing up to 0.45 kg/hl of caramel coloring and up to 100 g/hl of salt. 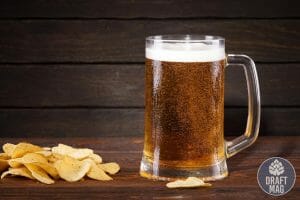 Stout is best known for its stronger variant of Porter, containing about seven to eight percent ABV. Stouts are also the top-fermented beer that features an almost burnt, roasted, and espresso flavor and an even darker body.

The cardinal rule of pairing Stout with food is to use items that are less sweet than the beer itself. As such, Stout can be paired with a wide array of dishes. Some of them include roasted and smoked food, braised dishes, rich stews, barbecued/ grilled food, oysters, and other saline snacks. It also goes well with uncommon food pairings such as chocolate and a myriad of desserts.

Stouts are immediately identifiable by their appearance. A distinctive tan or brown head and a typically opaque dark body. However, a clear profile is visible across the glass when light is shined through it. Even before you taste the brew, subtle aromatic notes of coffee, chocolate, licorice, and molasses make their presence known to you.

Importantly though, there are no hoppy notes to be found. And when you do finally take the sip, you discover a strong yet symphonic flavor profile that aligns with the aromatic notes. A good glass of Stout would never be watery but should present itself in a rich, full, creamy, and silky profile. 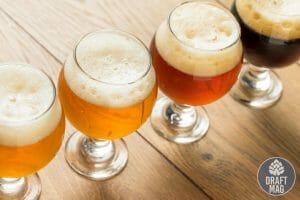 Stout shares much of its history with Porter and harks back to England in the early 1700s. While the quest to develop a strong and dark craft beer gave rise to the Porter, the same process was taken to the next level with a patented black malt. This resulted in the brew being named “Stout” for its extra dark and strong characteristics.

The ubiquity of craft and regional breweries has made the Stout a fairly popular beer in recent times. Presently, newer generations of beer aficionados are constantly being offered new forms of Stouts that help sustain its popularity.

Owing to its widespread popularity and availability, Stout has manifested in numerous versions around the world. The main variations of Stout include Dry, Oatmeal, Milk, and Imperial Stout. And even though Stout originated as a version of the original Porter, it developed its own distinct identity and is now known as just Stouts rather than Stout Porter.

This stout is a typically sweeter version of the Stout due to the presence of milk sugar called Lactose. In recent times, craft breweries are brewing this variant in numbers, bringing it back to popularity after losing some in the later part of the 20th century. Milk Stout is also commonly known as sweet stout or cream stout.

A unique variant of the stronger Stout, the pastry stout is quite sweet, mimicking the flavor and appearance of popular desserts. Breweries that brew the pastry stout want to present it with the flavor and aroma of popular desserts and sweet dishes. This opens up a world of flavors for them to play around with. Some of the most common ones are fruits, chocolate, marshmallow, vanilla, and even maple syrup.

While sweeter milk stouts gained substantial popularity in the UK and the US, the Irish went the other way with Stouts. Instead of the standard sweet brew, they developed a drier ale that lacked any lactose or oatmeal, which were popular ingredients for Stout elsewhere. The most notable stout (dry) out of Ireland is, of course, the Guinness Stout, which has contributed much to the popularity of Stout across the world.

These Stouts have a bitter flavor profile with a unique smoothness. This is due to the presence of gums, lipids, and oat-derived proteins added during fermentation. The bitter and astringent flavor profile of the Oatmeal Stout comes from a portion of Oats, which is added to the recipe during the brewing process. In many cases, Oats form close to 30 percent of the entire brew.

The Imperial stout, as the name suggests, was exclusively brewed to cater to Russian royalty. They are among the darkest and strongest versions of all stouts and boast a high alcoholic presence, close to nine percent ABV. Due to its strong flavor profile, the Imperial Stout has found takers in the modern generation, mainly among the craft breweries in the US.

During the early days of Stout, oysters were a common accompaniment being served along with beer across most taverns and public houses throughout England. In the modern context, the concept has been used to develop the Oyster Stout by infusing oyster concentrate into the stout brew, most notably in New Zealand. However, as Oyster Stout gains popularity, it continues to be found across other regions.

Chocolate stout uses a darker and more aromatic variation of the brewing malt called the chocolate malt. The malt develops a dark chocolaty color through persistent kilning or roasting of the ingredient. Some finished brews contain amounts of chocolate, flavoring, or cacao nibs to justify the theme.

As we have depicted in the article, there are subtle yet notable differences between Porters and Stouts. This is despite their common origins and a myriad of other similarities. The most significant difference is in the key ingredient used to brew Porters and Stouts. While Porters use dark malted barley, imparting them a dark brown body, Stouts are brewed with black malt or unmalted barley, which imparts an even darker body to the Stouts.

However, both can be equally enjoyable when trying to have a good time, provided you serve them well and pair them with the right food. As these are some of the finest brews around, we wholeheartedly recommend both Porters and Stouts to beer lovers all around the world. And your final decision will come down to personal preferences in terms of flavor, aroma, and mouthfeel.