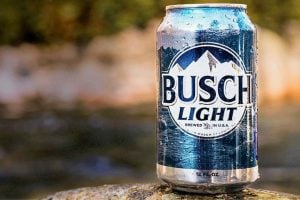 Natural Light vs. Busch Light: These two light beers are often compared. Consumers often think that, as both these beers are light, they are the same.

But can you say this with facts?

If not, read this article to find out the differences between Natural Light and Busch Light to choose the best one to quench your thirst.

The confusion between Natural Light and Busch Light isn’t without reason. These beers share many things in common, including their origin. Both Busch Light and Natural Light are produced by an American brewery located in St. Louis, Missouri. The founder of both these beers is Anheuser Busch. He had an idea to make high-quality beer having the same flavor as regular beers, but lower in calories.

To turn his vision into a reality, in 1977, he introduced Natural Light, which is also famous as Natty Light. Natural Light became a hit as soon as it was introduced to beer consumers. In fact, in 2008, Natural Light won the bronze World Beer Cup for “American-style light lager.”

Natural Light was the pioneer among other light beers that Anheuser Busch produced. Soon after it, Michelob Light and Bud Light were also introduced in 1978 and 1981, respectively.

Busch Light was first introduced as “Busch Light Draft” in 1989. However, later the “Draft” was removed, and the name was changed to Busch Light. Afterward, many other light beer versions were produced. One of these includes Busch Ice, which has a higher alcohol content than Busch Light.

Busch Light vs. Natural Light: What Are the Differences?

These beers are considered similar and often confused because they don’t have many dissimilarities. They have the same light colors and are American-style light lagers. Even their flavor and aroma profile are very close to each other. So, you must be wondering what’s the difference between Natural Light and Busch Light?

On the standard scales, both Natural Light and Busch Light have low alcohol content. Beers having an alcohol content of more than 4.5 percent are known to have moderate ABV. These beers with higher alcohol content get you drunk quicker. In the case of light beers, the only way you can get drunk faster is to increase the number of beers you drink at a time.

Moreover, drinking beers with higher ABV affects your mental and physical health. But if you choose Natural Light and Busch Light, can you relax in this regard due to their low ABV.

How Are Light Beers Different From Regular Beers?

Light beers are extremely popular in the United States. Many surveys reveal that 7 out of 10 top-selling beers in America are light beers. Light beers aren’t popular without reason. Some differences make light beers, including Natty Light and Busch Light, superior to regular beers.

Light beers are cheaper than regular beers. No doubt, there are some differences in taste. If you want quality over quantity, then you should choose a top brand of regular beer. But, if you’re a student or young person and looking for an economical yet flavorsome beer, then a light beer is perfect. 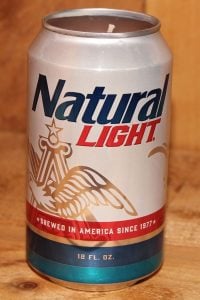 According to expert brewers, the brewing process for light beers is more challenging than regular beers. It’s because reducing the calorie count of beer isn’t a simple thing. Brewers use one of these four methods mentioned below to produce a light beer:

This involves combining the regular beer with water. The addition of water reduces the calorie and alcohol content, resulting in a light beer.

By increasing the time for the mashing process, more carbohydrates in grains are converted to simple sugars. These simple sugars have fewer calories. This beer is then further diluted with water to produce a light beer.

During the brewing process, external enzymes are added to increase the breakdown of carbohydrates into simple sugars. These simple sugars containing wort are fermented to alcohol and CO2. Then, water is added to lower the carbohydrate percentage for producing a low-carb beer, light beer.

For the production of a light beer, brewers also reduce the size of the beer bottle. A smaller beer bottle delivers fewer calories than a regular-sized bottle. For example, if a 12-oz bottle of a regular beer has 120 calories, by reducing the bottle size to 6-oz, you’ll get only 60 calories.

The table below shows the calories, carbs, alcohol, and protein percentage present in Natural Light and Busch Light.

Why Is Natural Light So Popular?

Apart from the flavor, here are some reasons why Natural Light is so popular:

It’s been more than 40 years since Natty Light was introduced, but it’s still a top-selling beer in the United States and worldwide. According to 2018 stats, 6.7 million barrels of Natural Light were sold. This vast number made Natty Light the eighth best-selling light beer in America in the year 2018.

– First Beer in the Space

Natty Light is the first beer that was launched in space in 2011. A can of Natural Light was attached with a helium balloon, known as the “The Aluminium Fullcan.” The balloon traveled to a height of 90,000 feet. Natural Light couldn’t reach the cosmos, but the project won immense recognition, making Natural Light even more popular.

Natural Light’s marketing strategies are another reason why this beer is so popular. Natural Light brewery always had eyes on the top events happening across the globe. For example, in 2019, the Washington Nationals baseball team participated in the World Series for the first time.

No, Natural Light and Busch Beer aren’t gluten-free. Both beers have barley as an ingredient which is a gluten grain. The presence of gluten makes these beers unsuitable if you’re on a gluten-free diet.

Busch Light vs. Natural Light: Which One Is Better?

It’s hard to say which one is better between Busch Light vs. Natural Light comparison. Because these two light beers have many things in common. These include:

Due to a bit of difference in the alcohol content, Natural Light is slightly heavier than Busch Light. So, if you want to save some money and a somewhat heavier flavor in your beer, then you can choose Natural Light. Otherwise, you should go for Busch Light. The choice of which one is better depends entirely on personal preference.

Now, as you know everything about Natural Light vs. Busch Light, let’s have a look at the most important points of the article: