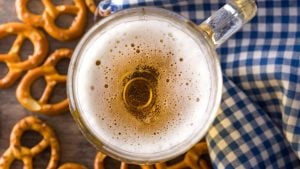 If you’ve decided to make an Oktoberfest beer recipe, you’re in for an exciting ride. There’s a reason why this Märzen beer is enjoyed by many people every year, and you can find out by enjoying this delicious, festive beer yourself.

This beer is just one of the many parts of the Oktoberfest traditions, but you can enjoy it whenever you want as long as you have the recipe. We’ve got you covered, so keep on reading to know how to make it.

How To Make Oktoberfest Beer

Making the Märzen beer is straightforward, so you can quickly dive into it if you’re an experienced homebrewer. The same goes for novices since it doesn’t require any special steps except secondary fermentation. There are extract and all-grain recipes available for you below, so gather your Oktoberfest beer ingredients and get brewing.

Follow the steps below if you’re an extract brewer.

All grain brewers can use the recipe below to make their Oktoberfest beer.

What Is Oktoberfest Beer?

Oktoberfest beer, also called Märzen beer, is a lager with a full body and a pale amber to dark brown color originating from Bavaria. It is traditionally served at the Munich Oktoberfest festival, but it dates back to the 1800s when the festival first began.

The beer style is a seasonal favorite and is enjoyed by beer enthusiasts worldwide. Depending on the brewer who makes it, it can come in different types and variants. You can enjoy this lager any time with a good Oktoberfest homebrew recipe.

The Oktoberfest celebration is traced to the 1810 wedding between Crown Prince Ludwig of Bavaria and Princess Therese von Sachsen-Hildburghausen. Although it wasn’t known as Oktoberfest at that time, the party lasted for five days. The celebration became very popular, so it became an annual tradition.

During the party, the people served a type of beer that had been fermenting since March, which is where Märzen gets its name. Thus, Märzen became the customary Oktoberfest beer. From that time onwards, the Oktoberfest beer style went through different changes until it became the full-bodied amber lager that we know and love today.

It started as a dark lager made with Munich malt. This was unsurprising as most beers made before the 19th century were dark.

By the 1870s, lighter beers had become more popular, so Josef Sedlmayr, the son of the owner of the Spaten Brewery, introduced a pale Vienna lager during Oktoberfest.

The light beer became very popular too, so many Oktoberfest brewers made this lighter version at the later festivals. The Oktoberfest beers served in America are different from those sold in Germany. These beers are on the darker side with a malt-forward, sweet taste, and an ABV between 5.0 and 6.5 percent.

Origin of Oktoberfest and Märzen Beer

The origin of Märzen beer is often disputed. Some say that the name was given to beers brewed in Vienna in the 1700s, but the beer is also closely related to the darker brews made in Bavaria in the 16th century.

The word Märzen means March, so the name was given to beers that were initially brewed in March. Since summer months were too hot for brewing and fermenting beers, they could only brew these beers during the colder months, just in time for drinking in the summer.

The modern Oktoberfest or Märzen beers are similar to the earlier versions. They are described as dark and full-bodied. Although the wars in Europe almost ended these beer styles, they became more popular again after the Second World War.

Today, the words Oktoberfest and Märzen are used interchangeably. Oktoberfest beers are served during the festival and Märzen is served most of the time, hence the similarities between the two.

There are varying recipes today, and you can even find some award winning Oktoberfest recipe styles online. These recipes win awards during the festival and are widely replicated as seasonal beers.

When Is the Brewing Season? 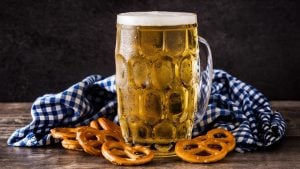 The brewing season was already set centuries away since the beginning of this practice. There were no refrigerators in Bavaria at that time, so they left the lagers in caves for them to ferment. The last brew of the year was done in March so people could enjoy them during the warm summer months.

When making your Märzen beer recipe, you should keep this style profile in mind so you know what to expect after brewing. This profile includes the appearance, scent, mouthfeel and flavor of the beer.

The color of your Oktoberfest beer should either be pale amber, amber orange, deep reddish copper or dark brown. It shouldn’t be any shade of gold, or you did it wrong. The lagering process will give it brilliant clarity, and the head should be off-white with decent retention.

The dominating aroma of the Märzen beer is a deep malty richness which seems similar to slightly toasted bread. It also has a light bread crust aroma. Even if it’s sometimes a dark beer, there are no roasted malt, caramel or biscuit hints. There is also no hop aroma in this beer.

This beer features a medium to full body, with a creamy texture on the palate. The mouthfeel does not feature any alcohol texture as it is hidden in the warmth of the beer. It is fully attenuated with no sweetness on the tongue.

The Oktoberfest beer’s flavor is similar to its aroma, so what you taste is what you smell. There are no roasted, caramel or biscuit tastes in the flavor. Instead, the dominating flavor is its bread-like, toasty malt character.

There are barely any hops in the flavor, and if there are, they are minimal. The hop character should be German nobles and show herbal, floral and spice hints.

Tips To Keep In Mind When Brewing

You should keep these specific tips in mind before you start making your Oktoberfest beer. These tips and tricks include how to choose the best ingredients and how to go about lagering and mashing the beer.

It’s best to use a decoction mash when making the Oktoberfest beer style, but this is only if you want to stick strictly to tradition. Today’s grains might not need a decoction mash because they have been modified so that you can make them the usual way.

In freezing temperatures, the traditional Oktoberfest style goes through secondary fermentation for four to six months. This can be pretty frustrating, but it’s best to start making the beer months before you plan on drinking it. It would be best if you also had a temperature-controlled fridge to consistently keep the beer in a suitable condition.

Usually, Oktoberfest beers are made with Munich malts. You can use a combination of Munich, Vienna and Pilsner or 2-Row malts, but Munich malts should dominate. You can also add some Crystal malt or a Cara-pils malt to improve the body and head retention. Avoid using malts that add caramel, biscuit or roasted flavors.

Oktoberfest beers are not hop forward, but they still need hops to support the malt. There should be a good balance between the two so that the malt shouldn’t be too sweet and the hops shouldn’t be overshadowing.

You can use low alpha acid noble hops like Saaz, Hallertauer and Tettnanger.

The best choice for a Märzen beer is Bavarian lager yeast. This will give you the right historical taste that you’re looking for in this beer. If you don’t get Bavarian lager, you can look for Oktoberfest blends or standard lager yeast.

You also need to consider the water you’re using to brew your Oktoberfest beer. It should be soft, and if you have hard water in your home, you can use Reverse Osmosis water just for the brewing process. You can also use water from a softening machine.

If you want the full traditional experience after brewing Oktoberfest beer, you can go for some delicious German food. These include soft pretzels and mustard, sauerbraten, sausage and sauerkraut, or pork schnitzel. All these types of food are salty, so they balance well with the sweet taste of the beer.

However, if you don’t have access to any of these delicacies, you can pair your Oktoberfest beer with grilled chicken, fish, pork and steak. You can also enjoy the beer with grilled vegetables, as they go well with the malty flavor.

Spicy food like Mexican and Asian dishes are good pairings too. Besides eating hearty food with your Märzen beer, you can also use it in your food recipes. This beer goes well with making chili and soups.

To enjoy your Oktoberfest beer to the fullest, you should serve it at warmer temperatures, ideally between 45 and 50 degrees Fahrenheit. It’s also best to use a mug or beer stein, which is a traditional cup with a boxy design and a large handle at the side. It gives enough room for the head and aroma of the beer to circulate.

As for storage, the beer should be kept in colder temperatures and consumed within months so it does not become stale or change its taste. You should also keep it away from sunlight.

Last Thoughts: Enjoy Oktoberfest in the Comfort of Your Home! 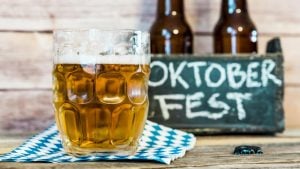 With our complete guide, you now have all you need to start an Oktoberfest festival in your home!

You can easily make the delicious Märzen beer for the party.

Now bring out your brewing equipment and attempt to make the best Oktoberfest beer today!