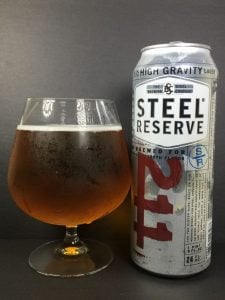 It is Steel Reserve review time, folks! A beer many enjoy, while some others dread. This is one beer that might scare away the bravest of all.

A beer that even the most seasoned drinkers would drink with caution, and that has a mixed response in the market, with an unclear target audience.

In short, Steel Reserve is beer that is most dreaded, but is also a cult of some sort. A beer that should come with a disclaimer – drink it with caution! Find out why this beer is so controversial in this article.

Would you be interested in trying out this beer? Read ahead to know what this beer is all about.

Steel Reserve – The Beer That Has Everyone Talking

Steel Reserve 211 is a beer that has high gravity, which in layman terms means: high alcohol content. Traditionally beers have about 4 to 6 percent alcohol content, but this particular beer shouts out danger. It contains about 8.1 percent alcohol. This is by far one of the highest ABV percentages found in any lager.

The taste is also hard on the palate, and does not encounter everyone’s taste. If you were to buy this, I can imagine the store manager saying: “Caution dear, the small pack is just enough, if you wish to wake up sane and with all your memory intact”. With regards to its effect, this beer should come with its own set of drinking guidelines.

The Steel Reserve brewery, which is owned by Miller, is the sole manufacturer of this high-gravity lager beer. Steel Reserve was released by Miller Brewing company in 1994 and, up until 2016, it stayed as the number one best-selling malt liquor in the States. The packaging comes in two forms – Black for Triple export malt liquor, and Silver for High gravity lager. This beer is slow-brewed with selected hops and extra barley, giving it a bread-like aroma and essence.

It is likely that it gets its number one spot in terms of sales because of its unimaginable ABV to price ratio. The Steel Reserve alcohol content is about 8.1 percent and is available in retail for $2.19 for a 24oz serving. Looking at the price factor, wouldn’t you pick one yourself?

Steel Reserve 211 Review – Is It Really a Double-Edged Sword? 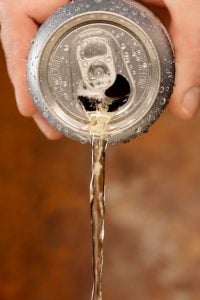 Steel Reserve beer is an extremely high gravity lager beer. The design embodies a 211 logo, representing the medieval symbol for steel. Steel Reserve is a slow brew with unique hops, which give this beer a smooth taste despite having an extremely high alcohol content. The brewers have used twice as many ingredients for this beer and have brewed it for over twice as long as traditional beers.

But here’s the thing: Even though the marketers of this beer tried to make the logo unique, the 211 symbol is used in a lot more places. Not so unique anymore, aye? Also, being one with such high gravity, high hops, and a pungent aroma, it is very unlikely that people with a taste for a bland beer would settle for a brew like this.

As you sip through the beer, you will come across a customer hotline number on the side. Give it a ring and you would be greeted with a friendly and funny reminder, “for a medical emergency please hang up and dial 911.”

If nothing else, it is just a subtle reminder that — even though drinking responsibly is important at all times — this could be a dangerous pick. Drink it abusively, and you would end up counting all your sins. Drink it in moderation and you might just have good memories to tag along.

– How Does Steel Reserve Pour?

The Steel Reserve 211 pours light golden-yellow, with a white head and slight lacing around the glass. It has an appealing gold body and is dimly transparent. One could also notice that the body of the beer is crystal clear and has an overall nice appearance.

Its pleasant appearance is also tightly connected with the white head lasting not long enough. This head quickly dissipates and leaves a small lace as you drink through. Some could also say the color of the beer is clear bronze-like, with a quick and short-lived effervescence and heavy carbonation.

Surprisingly, for a beer of such high gravity, the taste remains slightly on the sweeter side, like an apricot. It also has a sweet grainy flavor with a faint floral tinge. It has a little hoppy bitterness with a dry after-finish. Some people also felt bits of sweet corn, corn liquor, and a hint of honey.

The tasting experience ends with an explosion of malt and white bread; in other words, a stronger but very sweet ale flavor. Steel Reserve has got a lot of punch to it, which makes sense given its high ABV. Overall, the beer is surprisingly well balanced, with refined aromas and a solid alcohol presence.

The aroma and the taste of Steel Reserve both take some getting used to. The best way to get going with this brew is to drink it cold in a pint glass alongside some spicy side dish. Thanks to the high gravity, the alcohol content stands out in the initial aroma of the pour. It also has notes of bread and corn.

There is also a brief aroma of sweet cough syrup with some sweet grain-like structure. Some also noted the smell of banana and a hint of clove. Overall, the beer has a subtle smoothness when it comes to aromas, despite being a high gravity lager. One can say with confidence that the Steel Reserve has a mixed set of hints in terms of smell, catering to different sensory notes.

The first thing you’ll notice with the first sip of Steel Reserve is the hops. This is very unlikely for any other malt liquor. The second thing you will notice is the syrupy, sticky feel on the tongue. Also, as the beer goes down, one would perceive a sense of burn due to the high alcohol content.

But, surprisingly, there is a lack of burn, which is a good thing and makes Steel Reserve easier to drink than other high alcohol content drinks. The feel of the Steel Reserve has had mixed reviews. While some people enjoyed the sweetness, some others disliked the aftertaste, which left the tongue feeling coated.

Steel Reserve: What Should You Make of It?

The Steel Reserve 211 is an accurate purchase to get a good buzz with just a pint at pocket-friendly prices. Some can get a decent buzz with one can alone.

With a sweet corn-like taste and bread-like aroma, this beer looks and feels different from any beer with such a high alcohol content. If you are not one to get carried away with online reviews, you should probably try one for yourself and see if it can win you over.

This would be a great beer to pair with a pound store frozen pizza or a quick takeaway sandwich. You could maybe use it as a substitute for other hard liquors too. You could also pair it with seafood and spicy food to enhance and balance off the sweetness of the beer.

We have covered plenty of information in this Steel Reserve review. Let’s sum it up here:

Overall, when it comes to the Steel Reserve beer review, you should know that it has a bolt taste, to say the least. But, considering the price at which this beer is available in the market, it is not a bad pick. Especially college-goers, who have fixed pocket money to spend, would reach out for the Steel Reserve 211. Does the beer stand a chance to get into your refrigerator too?