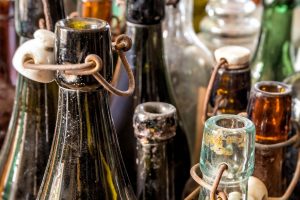 Beer sediment is made of protein and yeast particles left from the brewing process. You may have wondered if consuming this yeast sediment in beer is safe or not. We know that those floating particles in your beer don’t look appealing. However, they are not as harmful as they might appear.

Let’s find out more about the stuff floating in beer and the possible things you can do about it, whether you want to drink your beer with the sediments or not.

The Reasons Behind Sediment in Beer

We know, the white flakes in beer can feel gross or put you off from drinking the beer. The particles in beer bottles could indicate a few things. Understanding the reasons why a beer bottle may contain sediments or particles is crucial as you will be aware of what you’re consuming, why it’s there, and whether you should be concerned about it or not (other than appearance factors).

Below we have listed some of the most common reasons and factors that contribute to beer sediment:

– The Beer Style Can Be Unfiltered

It could just be the style of the beer! Some beers, such as a Belgian Witbier, hazy New England IPA, American Wheat, or German Hefeweizen beers tend to have sediments or a cloudy appearance as a part of its style. These beers are served with cloudiness and in an unfiltered manner. When unfiltered IPAs are dry-hopped, many polyphenols from hops provide a hazing appearance to the liquid by binding with proteins.

Most bottled beers go through a technique that includes adding a small proportion of sugar and active yeast before it is bottled, hence the technique is known as “bottle conditioning”. This may not be the case for all bottled beers, but some beers are indeed packaged during active fermentation.

As a result of this packaging method, the alcohol volume increases in the beer while also allowing the liquid to carbonate naturally. Yeast cells get clumped together and fall to the bottom of the container to form a thin cake-like structure when the fermentation process is complete.

The structure at the bottom gets disturbed and mixes into the suspension when the bottle or container is shaken, giving the beer bottle a snow globe effect. The particles in beer might make you hesitate or wonder if it’s safe to consume but actually the yeast particles are safe and good for consumption. In most cases, the ongoing fermentation of the yeast creates CO2 that in turn helps to keep the beer better and fresh for long.

Another reason why beer sediment can form in beer is due to aging. Apart from strong ales that get better with the aging process, not all beers perform or taste better when left to age for a long time. As we know, bottle-conditioned beers already have yeast present in them which helps to ferment out complex sugar particles. Some specific beers, such as high gravity beers, are dosed with yeast during packaging as well.

However, not all beers are appropriate for aging. Some beers turn stale, musty and oxidized. The hop character fades away and the protein particles get clumped in beers that do not tolerate aging so well. In such cases, you’ll notice a different kind of floating particle that does not look like beer sediment. These particles may look like tiny snowflakes or similar-shaped floaties.

No matter the taste or appearance, such beers are still safe to drink.

Dry hopping can sometimes contribute to the hazy/cloudy appearance of a beer. Dry-hopped beers may release tiny particles into the liquid over time, which could be one of the reasons why there are floating particles in your beer.

If you’re familiar with aggressively hopped beers such as IPAs, Double IPAs and New England IPAs, you’d know that these beers get charged with hops from time to time and often have a cloudy appearance when compared to others. It’s often the brewers’ choice whether to filter these hop particles or not.

The good news is dry-hopped beers or unfiltered beer that may have floating particles in them are completely safe to consume.

Even though there are many different types of beers that may naturally have a cloudy style or accumulate beer sediment in its liquid due to fermentation or hop particles, sometimes it could indicate that the beer is spoiled or infected.

This could be due to the effect of wild yeast that can be an access to the yeast that already exists in the liquid. Beers that are poorly sanitized or contain bacterial contamination may have floating particles or a cloudy appearance. Spoiled or infected beer usually gives off a bad flavor, smell and taste, all of which makes it unpleasant for drinking.

Unless you choose to drink wild-fermented beers such as Lambics, you should definitely let go of a beer that tastes and looks bad at the same time.

Is Sediment Safe To Drink? 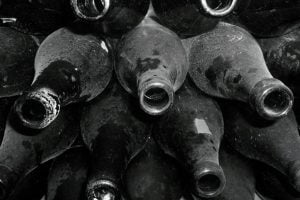 Yes, beer sediment is normally safe to drink. Despite the fact that those floating particles in a beer don’t look much appealing to our eyes, the white particles are actually harmless and safe to consume.

Some beers presente these particles due to lack of filtration, bottle conditioning, dry hopping, aging, or just as a style. Beer sediment is a natural particle and does not affect the beer quality in any way.

Surprisingly, spoiled or infected beers may smell or look bad but are still safe to drink.

What To Do With Beer Sediment?

This allows the tiny particles to settle down at the bottom of the bottle. During serving, you can gently and carefully pour the liquid into the beer glass while holding it firmly at an angle that only the clean beer gets poured.

As soon as you are done pouring the majority of the beer into the glass, the last portion of the beer that has residue and particles or chunks in it can be disposed of. You might lose a little bit of beer but it is the closest you can get to a filtered beer experience if that’s your preference.

How To Clear Your Beer

If you’re homebrewing and want to serve yourself or your guest with a splendid glass of beer that’s clear and clean, then you might want to know some common ways to clear beer. The appearance of beer sediment might not be visually pleasing to all which is why some may want to get their beers filtered and rid of any particles. There are three distinctive ways to filter your beer for a cleaner look:

Once the fermentation process is complete, you can transfer the beer into another container for a few weeks in order to age the beer. During the transfer of the beer batch, most beer sediments get filtered and left into the previous container. Along with that, it also offers more time so that the yeast can drop out of suspension and less sediment remains in the bottle. This increases the flavor of the beer due to aging, especially when the brew has a high alcohol content.

Another interesting process to get rid of floating particles and chunks from your beer is through hot and cold breaks. This unique process allows the proteins present in the beer to bind together in both hot and cold conditions. However, the most crucial part of this process is to maintain an adequate amount of heat or cold temperature to ensure that the process reaches its reaction point. Without sufficient heat or cold, the beer will remain cloudy and the beer sediments will float in the beer.

To get a clear beer, fining is one of the easiest methods and requires minimal time. The process involves the addition of finings to the liquid, which helps to remove proteins from the suspension. Usually, many homebrewers add finings to the beer during the last minutes of boiling, in order to clear their beer batches and produce fresh beer without any residue. Common finings are Irish Moss and Whirlfloc.

How To Miv the Sediment Into the Beer

The easiest way to mix the sediment into the beer is by gently placing the beer on its side and rolling it back and forth so the particles get mixed with the suspension. The gentle movement will help to dilute the yeast particles.

Why Does Commercial Beer Have No Sediment?

Commercial beers do not contain any sediment or beer particles because the companies force-carbonate the beers right into the container with the aid of specialized machinery and technology. This is not the same case for small breweries or craft breweries that still rely on bottle conditioning.

How Can You Tell if Beer Has Gone Bad?

The flavor and smell of a beer that has gone bad can easily be pointed out because of its abnormality. Many beers have wild and strong flavors but you can always tell apart between a beer that intentionally tastes different or if it has gone bad. If you can taste bad flavors like that of sulfur, cooked cabbage, extreme sourness, or sewage, then the beer is no longer consumable.

Can You Drink 50 Year Old Beer?

Drinking a 50-year-old beer or an expired beer is harmless. The downside to drinking an old beer is that it won’t have a good taste or smell. Plus, even though it is safe to drink in most cases, there are chances that you may get an upset stomach or digestive problems. It’s best to avoid drinking a beer that is very old but if you do, you’ll have to deal with the staleness or maybe a stomach ache. 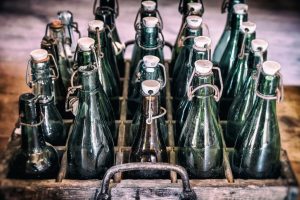 Let’s sum up the main points from this article, before leaving you to experiment with beer sediment:

Finding little floating particles in your beer bottle could be alarming and unappealing at times. However, most of the time there’s nothing to worry about. The particles are safe and natural residue from yeast which sometimes even helps to keep the beer fresh for longer. There are various ways to get rid of the chunks and beer sediment to enjoy a clear glass of beer or if you prefer, the beer sediment can be mixed back into the beer.