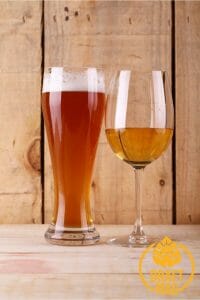 Beer vs wine is an age-old debate. Beer and wine are by far the most popular alcoholic beverages. Wine has always had a devoted following, and the current rise in popularity of craft beer has ensured that beer will continue to be popular.

In this article, we’ll discover the ingredients in each of these drinks and how their distinct flavors might improve your drinking experience. Keep scrolling to learn the difference between beer and wine.

Wine vs Beer: What’s The Difference?

Here are the differences between beer and wine:

Beer is best for tasty fried foods. It works alongside various BBQs, roasted meats, or traditional American snacks like burgers and pizzas.

Let’s dive into the features of beer:

Beer has a lower alcohol content, with an average of five percent. High-gravity beers may have a higher alcohol-by-volume percentage, some reaching as high as seven or eight percent. The regular serving size of beer is slightly larger than wine’s, at 12 ounces.

The flavor of a beer depends on a lot of factors, such as the materials used by the brewer, the brewing technique, fermentation, bottling, and its age. You can typically anticipate malty, hoppy, sweet, bitter, sour, or even skunky flavors in your beer. Darker beers, such as porters and stouts, are sometimes brewed with tastes like coffee, caramel, or chocolate.

Let’s have a look at the ingredients that affect the flavor of your beer:

It is impossible to brew beer without yeast. It is the component that aids in the fermentation process. Yeast assists in the conversion of sugars to alcohol, absorbs carbohydrates from malted grain and emits ethyl alcohol and carbon dioxide in exchange.

Hops, which come from female flowers, are often used to impart the beer a bitter or acidic flavor. Hops provide beer with a strong scent, a wide range of aromas, and bitterness that counteracts the malt’s sweetness. The hops are the blossoms of a perennial vine that look like soft, green pine cones and have lupulin, a yellow powder.

Barley (mainly malted barley) helps sweeten beer during the fermentation process. The yeast feeds on barley to make carbon dioxide and alcohol. As barley is grainy, it can impart a gritty texture or flavor to beers depending on the usage.

Beer colors can range from gold to red since it is prepared using grain-derived carbohydrates (with deviations of haziness and opacity and depending on the beer). Some beers will have a deeper color than others.

Beer is a fermented alcoholic beverage brewed by extracting raw components with water, boiling (hops), and fermenting.  Beer employs a wider spectrum of ingredients than other beverages, resulting in complexity that other beverages like wine, distilled spirits, mead, and cider cannot match. The precision needed for its development is far higher.

It has a wider range of flavor, color, mouthfeel, and strength than any craft beverage. It is bubbly, flat, affordable, old, and constantly changing. It can be dark, light, sweet, fruity, sour, or bitter – depending on what you like.

You might be familiar with the two basic categories of ale and lager – both are beers. However, they use different strains of yeast. This has an impact on the brewing procedures used and the flavors produced.

What Is Wine Best For?

Wine is best for cheese and meats. There are rules to be followed based on the color of the wine served.

White wine works with white meat, while red wine is best paired with red meat. Bitter wine is suited to fatty foods. And it should be noted that it is better to pair the wine with the sauce of the dish.

A basic understanding of wine’s essential qualities will set you up for a lifetime of tasting pleasure.

Here are some of the features of wine:

Wine has a substantially higher amount of alcohol by volume than beer. The alcohol content of wine runs from 11 to 13 percent, making a conventional drink only five ounces. White wines are typically lower in alcohol than red wines. However, certain dessert wines can contain up to 40 percent alcohol.

You can determine the alcohol content in wine by swallowing it and then exhaling. The intensity of the burning sensation will help you figure out the amount of alcohol in your wine. 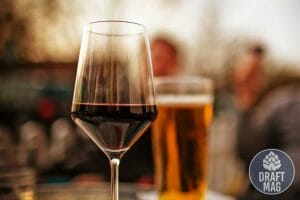 Depending on the wine you choose, the flavor might be very different. Some wines are sweet, while some have no sugar and are pretty dry.

An excellent wine will have a nice mix of sour, sweet, salty, and bitter flavors. Tannin is frequently the source of bitterness in the wine.

The ingredients in wine are:

Yeast is an essential component in winemaking as it aids in converting carbohydrates to alcohol. All fruits, including grapes, have yeast that, when exposed to air, proceeds to ferment the drink.

This is the base wine. It has all of the necessary components for fermentation, from the wild yeast that will kickstart the process to the sugars that will be converted to CO2 and alcohol.

During fermentation, vintners add enzymes to the wine to prevent harmful indigenous yeast from overtaking the good yeast. These additions alter the flavor, look, and scent of the wine. Clay, fake yeasts, acid, gelatin, enzymes, sugar, and charcoal are a few additives. Sulfur, for example, is used as an antioxidant preserver in wine.

Tannins are natural compounds found in plant seeds and skins. They are also in chips and oak barrels used to mature wine. They have a harsh flavor and the same hue as wine. Tannins give the wine its flavor and body and help it age effectively.

Acids, such as malic acid, and tartaric acid, are widely used to boost the acidity of the wine.

You brew beer using only four ingredients: hops, water, yeast, and malt. The process of making beer is known as brewing. It is the process of heating and chilling water, hops, and malt to release a variety of floral, aromatic, bittering flavors and fermentable sugars to convert them into alcohol.

After the water, hops, and malt has been cooked, chilled, and strained, the yeast can attach itself to the sugars released by the malted barley. Yeast, a microorganism, consumes sugar, produces alcohol, and creates distinct flavors, resulting in the beer we all know and love.

– What Are the Varieties of Beer?

There are over 100 different beer varieties available, with the majority being Ales and more than 25 different types of Lagers.

Here are some of the most well-known types of beer:

Lager beers are fermented at the bottom of the container with Saccharomyces Pastorianus yeast. Temperatures between 35 F and 55 F are ideal for this yeast to ferment. However, since Lagers ferment at lower temperatures, it takes longer to ferment than other types of beer. They also have a sharper, more refreshing flavor.

Porter beers, a type of ale, are distinguished by their dark black color, roasted malt aroma and overtones. Their flavor can be fruity or dry, depending on the roasted malt used in the brewing process.

Stouts, like porters, are dark, roasted ales. Stouts are less sweet than porters and often have a bitter coffee flavor due to the addition of unmalted roasted barley to the wort. A thick, creamy head distinguishes them. Guinness is one of the most well-known stouts in the world.

– What Are the Types of Wine?

There are three types of wine: red, white, and blush.

In contrast to the other two varieties of wine, red wine has the highest health advantages. They contain more tannins, which are responsible for the dry mouthfeel in red wines.

The most prevalent smells and flavors in red wine varietals are:

White wine is an alcoholic beverage prepared from light-skinned grapes that is clear or pale golden. The most prevalent fragrances and flavors in white wine varieties are:

Additionally, white wines have a higher level of acidity.

The color of blush wines varies from extremely light to medium pink. The practice of leaving clear grape juice in touch with colorful skins in a wine lends the blush color to the wine.

Mostly this wine is made in two ways:

– How Does the Winemaking Process Go?

– What Are the Health Benefits of Beer Versus Wine?

The health benefits of beer and wine are abundant. Wine is rich in tannin and contains procyanidins, which protect against heart disease. This nourishing drink reduces inflammation and removes harmful toxins from the body.

Beer is a good source of dietary silicon, which helps maintain bone density and decreases the chance of osteoporosis. None of these give you permission to binge drink, but a glass of wine or beer a day could keep the doctor away if consumed in moderation. 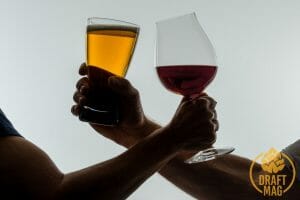 When it comes to alcoholic beverages, wine and beer are popular. Is beer equivalent to wine in certain aspects, even though their flavors are vastly different?

We all know that each type of alcohol has its own set of varieties, taste, and brewing techniques.

However, beer or wine comes down to personal choice. When choosing what to buy for your weekend celebrations, consider the health benefits of beer and wine as well as the flavor characteristics of each.