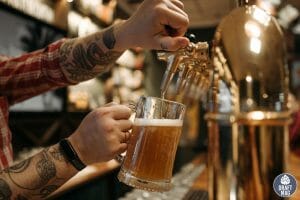 Here is the ultimate list of Best Breweries in Manhattan. Did you know the very first brewery in North America was built on current-day Manhattan Stone Street? This simply goes to show how rich and historic Manhattan and its surroundings are when it comes to beer and brewing.

Here is the ultimate list of 23 best breweries in and around Manhattan that you should definitely visit.

This brewery is located in Lower Manhattan in an upbeat and welcoming neighborhood. This is also the first location in the U.S for Swedish Bastard burgers.

They have a 1BBL pilot system that houses experimental and limited seasonal releases on tap. The taproom has a punk atmosphere with semi-garage-like furniture and spray-painted walls.

Their hot seller and the latest entry on their tap list is the Cream Milkshake IPA. At 8 percent ABV, the beer is a flood of orange, a burst of lactose and a pinch of vanilla extract.

This brewery is located in the Bronx area of New York, in a site full of rich history, tragic loss and revolution. That’s where the name took birth.

They brew fresh, unfiltered and artisanal brews. The makers of this brewery focused on the growing Brooklyn area of NYC. The original brewery is a site with rich history and tragic war losses.

The S’more Void of Light is a delicious Milkshake Stout brewed at 7.9 percent ABV. It has a well-balanced sweetness from marshmallows and a graham cracker base with cacao.

This is one of the best breweries in Brooklyn. The Brooklyn branch is located in the industrial city and is dedicated to the barrel aging facility. They are a licensed farm brewery which means almost all of their ingredients are either grown by themselves or locally sourced in collaboration with farmers.

Green Door is a mixed culture Japanese Rice Lager brewed at 5.4 percent ABV and has all the crispness of a classic Lager with a clean finish. 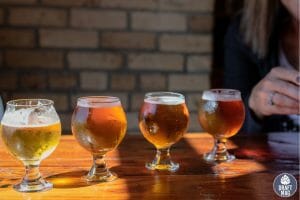 Mostly known for its heavy smoothie beers and rich Stouts, this brewery in Queens brews all its beers on site. Their taproom is a well-lit, well-seated upbeat atmosphere, perfect to relax on a mid-Sunday afternoon. Their taproom and brewery are located in the Ridgewood neighborhood with over 20 beers offered on rotation and a bunch of selected wines, ciders and cafe food.

For Stout lovers, this place is a dream come true. You can try the Freezer Fresh Sundae and Imperial Stout at 12 percent ABV.

This is one of the best breweries on the NYC breweries map. The brewery opened in 2014 and they offer everything from traditional to mixed-culture beers. The flooring is laid out with sand, giving it a very beachy vibe. The Montgomery is the music venue indoors, and the yard is a year-round outdoor space.

Sidenote Grapefruit and Mint is a Hard Seltzer brewed at 5.0 percent ABV.

This New York State farm brewery is located in an upbeat neighborhood and has an inviting indoor space. The source and utilize ingredients from local farmers and promote community living, often hosting small events and local artists.

You must try the Lager House Vienna brewed at 4.9 percent ABV. It is a classy malty Amber Lager with a well-balanced bitterness.

This is the best New York City craft brewery that features fresh beer, NYC’s favorite pub grub food in an extremely relaxed surrounding in the middle of lower Manhattan. The welcoming bar makes it an unpretentious space for people to come by and enjoy a couple of drinks with desirable music.

The Sub Rosa is a classic Lager at 4.7 percent ABV. This is an extremely crisp, dry and perfectly balanced Lager.

This brewery opened in 2017 on Long Island. They brew a wide range of beers, both traditional and experimental. Their taproom has a high ceiling and comfortable high chairs perfect for a get-together or a noon outing. They brew some of the best craft beers in town.

The Owl Theory is a delicious Coconut Stout that has semi-sweet flavors of cocoa and a rich mouthfeel thanks to the lactose infusion.

Alewife is all about loving the ancient elixir. They brew with the intention to bring traditional brewing techniques and recipes with modern brewing technology. Their taproom has both indoor and outdoor seating and a welcoming atmosphere.

The Alewife Thousand Stars is one of the best seller, Czech Pilsner brewed at 5.2 percent ABV. It is a classic German Pilsner with a clean, crisp and refreshing finish.

The brewery was founded in 2013 with the idea to keep the spirit of experimentation in the American craft brewing world. They brew delicious beers, which have depth and flavor by pushing the boundaries of traditional flavors and styles that make up for a wow factor.

The Double Negative is a rich Imperial Stout brewed at 10 percent ABV. It has a rich mouthfeel, a heavy body and a warming effect, making it perfect for the winter months.

The brewery opened in 2016 with the idea of bringing fresh brews and spirits under one roof to bring people together. This is Brookly’s first craft brewery and distillery. They are specialists in making flavor-forward beers.

Ill Plus Matic is a DIPA brewed at 8.2 percent ABV. It is a hazy beer with flavors of apricot, papaya, lemon and sweet guava. The hazy character comes from flaked and malted oats

KCBC is located just outside of Manhattan, under 25 minutes away. They are a 15 BBL production brewery with a 5000 sq. ft warehouse in Brooklyn that houses their taproom.

It is widely popular as the beer capital of the Northeast. Keep an eye on their social space to know more.

KCBC Bad Owl is a West Coast IPA at 7.0 percent ABV. It has a copper-red pour and is flooded with flavors of lime zest and grapefruit. 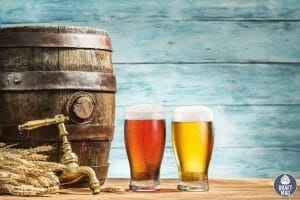 This brewery was founded in 2007 but got pulled down to dust during a hurricane in 2012. Soon after, in 2015, they were back up on their feet with an iconic Boardwalk neighborhood by the edge of the Atlantic ocean.

Pride 365 is a Hazy IPA at 7.0 percent ABV with citrus-like character, high hoppiness and a balanced maltiness.

This brewery is on Staten Island and opened in 2017. They brew some of the best experimental sours and Fruity IPAs. They have small outdoor seating and offer takeout as well and have an overall welcoming ambiance.

One of their must-try beers is the Apropos at 4.9 percent ABV. This is a Mexican Lager flooded with whirlpool hop additions to create a mild, hoppy and crisp beer.

This is a classic Brooklyn brewery that usually produces traditional and farmhouse-style Belgian, English, German and American beers. Their main goal is to keep the history of craft brewing intact with the changing dimensions of the craft beer industry by creating unique and historic beers.

The Abby Quad is an excellent Farmhouse Ale at 10.1 percent ABV. It has rich flavors of banana, and dried plums and has intense rounded maltiness.

This brewery is located in Queens, just 15 minutes from central Manhattan. This was the first brewery in Queens and their taproom offers to-go food and daily events that are listed on their social pages. This brewery is known particularly for its Pastry Stout.

The Spider Friendz IPA is a silky, smooth West Coast IPA at 6.9 percent ABV. It isn’t too hoppy, and has juicy and citrusy notes with hints of berry jam on the back.

This is yet another epic iconic brewery just 15 minutes away from central Manhattan with both indoor and outdoor seating. This is a dog and child-friendly brewery. They also serve cider and selected wines.

The Sushi Grade is a classic Japanese Lager brewed using Japanese rice at 4.3 percent ABV. This beer is a perfect summer beer as it is crisp, clean and has a refreshing mouthfeel.

This brewery runs on the basic need for quality beer, community, creativity and local collaboration. This brewery is surrounded by the hip culture of Staten Island, which defines its creativity.

King Like Mom is a Fruited Gose beer with a rich orange pour. It has delicious notes of citrus and lemon, making it an excellent summer beer at 4.5 percent ABV.

This brewery mixes European brewing techniques with modern American craft beer innovations to brew classic Farmhouse, Lagers and Ales. They have a diverse range of offering on their tap list in a taproom with both indoor and outdoor seating.

Sinister Rouge is a delicious Flander Red Ale at 6.0 percent ABV. This is a Flemish-style Sour with medium acidity and notes of white chocolate, dark fruit, cherry and red wine with a dry finish.

The Single Cut Queen’s taproom has a garage-like, upbeat atmosphere. They have small outdoor seating and larger indoor seating. They are famous for creating hop-driven beers and have a loyal following of the East Coast folks and markets.

The Hops Sound Dry Hop Ale is a beer at 5.0 percent ABV with flavors of citrus, grassy flowers and a clean and crisp finish. The beer also finishes slightly dry on the mouth.

For someone who enjoys a tasty beer in a relaxing environment, this brewpub should be on your list. The space has a classy yet hipster vibe to it and often hosts live music on weekends. This is also a microbrewery that produces small-batch beers.

The Band of Gold is a Farmhouse Style Ale at 7.0 percent ABV. It is for the OG and traditional beer lovers who enjoy dry-mouthfeel beers that leave them wanting more.

This is the only Women-owned and operated brewery in NYC with a taproom that has both indoor and outdoor space. They are most known for their bitter IPAs and strong, high ABV ales.

Sun Up is a Hazy IPA at 6.5 percent ABV. it is flooded with flavors of pineapple and mango smoothies. It also has a dose of milk sugar for the sweetness.

This is one of the most well-known local breweries in Manhattan, KS with a brewing experience of over two decades. They aim at brewing artisanal beers and offer a family-friendly environment. Their taproom is well-lit and spacious.

Anustart is a  new addition of NEIPA at 6.0 percent ABV to their tap list. This delicious brew has notes of pineapple, citrus and melon.

NYC has been booming with brewing for centuries now. The city was hit by the craft brewing wave in the early 19th Century, and today, from Manhattan to Long Island, Queens to Brooklyn, hundreds of breweries have popped up. 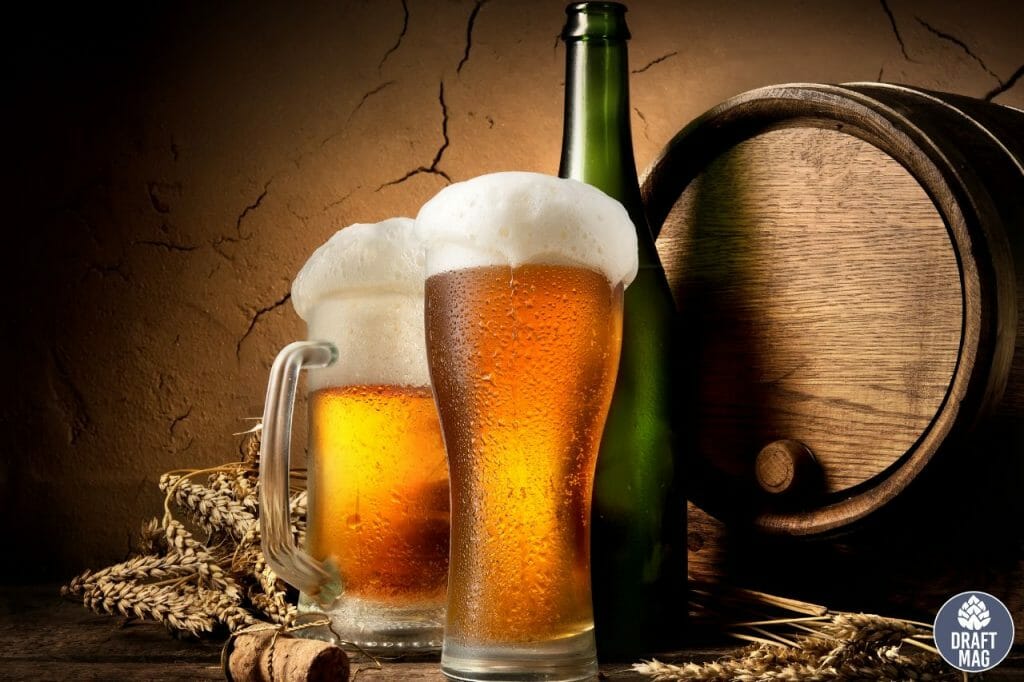 So where do you plan on starting your NYC brewery tour from? Pick a place, raise your glass and have a great time.