Corona Familiar vs Corona comparison is one that might be challenging to notice the difference between the two beers since they have similar styles. Both beers are brewed by Grupo Modelo, under the Corona brand. Both beers are poured with the same color and clarity, and it’s also hard to identify either one based on their aroma. If you’re wondering about the difference between Corona Familiar and Corona, our guide has all you need to know. 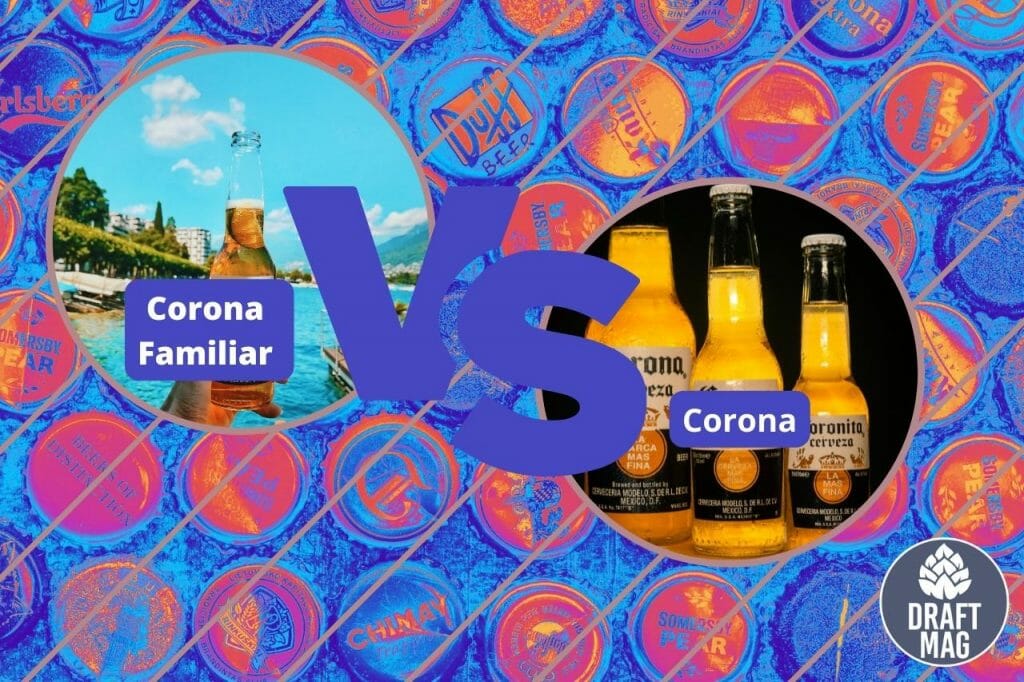 What Is the Difference Between Corona Familiar and Corona?

The main difference between Corona Familiar and Corona is that the Familiar one has a fuller and richer flavor than the regular Corona, which is light and crisp. The Familiar one features flavors of malt and sweet cereal, while the Corona Extra has tart barley and honey-sweet flavor.

What Is Corona Familiar Best For?

Corona Familiar is a Mexican adjunct lager brewed by Grupo Model in Mexico City. It features an ABV of 4.8 percent while the IBU is 19.5, giving you less bitterness. The Familiar named beer is full and rich, with a medium body.

The Familiar beer pours a pale straw color and is a bit darker than the Corona beer. It features a minimal head that will dissipate quickly. On the nose, the main aroma is the malt, which scents fresh white bread and biscuits. It does not smell as skunky as other beers.

There are hints of grassiness that can come up as the beer remains open. When you taste the Familiar Corona, you’ll notice the full body and refreshing flavor. The malt taste is rich, with the cereal flavor upfront. The grassy and skunky scent in the carbonated beer is not present in the Corona Familiar, as it is in the rest.

With the fine carbonation of this beer, the Modelo beer offers a zippy and slightly crisp finish. It is pretty refreshing, with hints of grain following into the aftertaste.

This beer might not be as popular as the rest of the styles of the beer, but it features a malty and biscuit flavor profile. It ends with a smooth flavor and is easily paired with different kinds of food, whether you’re drinking alone or with friends.

The Familiar Corona offers different advantages, especially the full-bodied, crisp, and malty character, these are its popularity and styles. The Mexican beer is well-packaged in brown bottles, so it is protected from becoming skunky and features a slightly higher ABV than the Corona. It is available for purchase in the 32-oz bottle format.

However, some beer drinkers have criticized the Familiar one because the flavor is not as complex as other Mexican lagers. The carbonation will dissipate quickly after you pour it too, and the body is too heavy for some when compared to the other bears of this style.

What Is Corona Best For?

The Corona beer, which is a Mexican lager by Grupo Modelo. The beer has a 4.6 percent ABV with an 18 IBU. Beer lovers say it is too simple, highly drinkable and approachable due to its crisp flavor profile. This also makes it very popular among beer lovers.

The Corona Extra is a light and crisp lager and is popular in the USA. The flavor profile is not too complex and with notes of sweetness. It is sweeter than the Familiar but has a bit of a hoppy yet pungent taste on the palate. The beer features a tart flavor, mainly of barley honey-sweet, and ends with a vegetal taste.

The Corona has a lighter appearance than the other beers, with a light yellow hue in the glass. The head is light and thin, too, and will dissipate quickly. On the nose, the lager smells of sweet malt and has slightly bold smell. There are also aroma notes of citrus and green apple.

The first thing you taste when you drink the Corona Extra is the effervescence from the carbonation. It starts at the tip of your tongue and will travel up. The sweetness becomes higher as you drink, but the beer does not get sugary. There is a bit of bitterness in the middle. The flavor notes are mild, with grains and orange.

After enjoying the sweet flavor on the palate, the beer is slightly bitter in the finish. The bitter flavor will disappear very quickly, and you’ll be left with sugar and carbonation bubbles while you swallow.

One of the reasons why people enjoy Corona Extra is its simple and uncomplicated character. The beer is highly drinkable since the flavor is not complex. It is also refreshing and crisp. Plus, the lager is affordable and is widely available, so you can purchase it at any time.

This gold-colored beer may be delicious, but it has a bit of a weird smell to it that people find unpleasant. Some also say the flavor is too basic compared to other Mexican lagers.

– What Is the Difference Between All The Coronas?

The main difference between the Corona beers is the mouthfeel and flavors, as some are fuller or lighter and sweeter or more bitter than the others.

– How Long Has Corona Been Around?

The Corona brand was established in 1925 at the Grupo Modelo company in Mexico. It was meant to celebrate the 10th anniversary. Aside from Familiar and Extra, there is also the Corona Premier and Corona Light.

– Is Corona Extra The Same as Corona?

Yes, it is. The official name of Corona is the Corona Extra beer, and both terms can be used interchangeably.

Based on our well-tailored comparison review, the two lagers have some similarities but are also different. The main difference is that the Familiar one has a fuller and richer flavor than the original one, which is light and crisp.

The Familiar Corona has a slightly higher alcohol content than the Corona, while the latter is a bitter one. Overall, note that the two beers are always a good choice regardless of the occasion since they are both refreshing and drinkable.