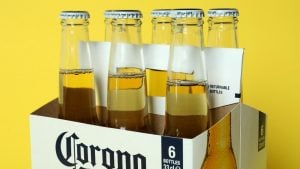 As a casual beer enthusiast, especially one looking to cut back on carbs and calories, you may find it confusing how different the new Corona Premier is from the traditional Corona Light pint.

Let’s review each of the above corona beer variants to understand the notable differences.

The table below summarizes the difference between corona premier and corona light:

What Are the Differences Between Corona Premier and Corona Light?

While both products from Corona are light lagers and marketed as a healthier option for drinkers, Corona Premier is blander and watery than Corona Light, which retains the original Corona aftertaste.

Corona Premier beers do not have a strong flavor; they can come off as bitter and hoppy, so they need flavorful dishes to complement their taste.

It has a crisp and refined taste but has a watery and bland profile compared to its full-strength cousin – Corona extra. It doesn’t have a heavy head when poured into a pint glass.

The fruit-honey aroma with a touch of the malt makes it the smoothest, most drinkable Corona that’s packaged in a familiar clear bottle. You can add a lime wedge to give it a flavor kick.

For a 12-ounce (330 milliliters) bottle, Corona premier calories are measured to 90 calories (less than corona light calorie count). The lager contains 2.6 grams of carbohydrates and 0.7 grams of protein with zero fat content.

Considered the most suitable drink for people on a strict low-calorie diet, it’s an easy-to-drink brew that isn’t loaded with calories and carbs. 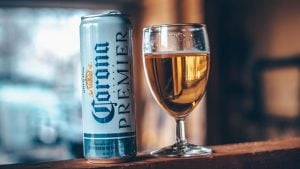 Corona Premier is the lightest version of all the other beers produced by Corona. It is perfectly balanced with a dash of sugariness and a pleasantly dry finish. The upgraded version of lager light beer is pale yellow, has a straw-colored hue, and has the same ingredients as Corona Light.

It is meant for people looking to stick to a familiar brand but still want to reduce the calories and alcohol content. The beverage has a familiar aroma of fresh-cut grass and skunky on the nose and goes especially well with seafood.

What Is Corona Light Best For?

It is smoother and tastes thinner than Corona Extra but retains the traditional corona aftertaste. It doesn’t have enough bubbles but has a warm, comforting taste.

The light-bodied pint has a fanbase among females and beginners due to its delicate palate and skunky nose. It’s grainy, dry, and smooth.

Corona Light calories stand at 99 in a 12-ounce (330 milliliters) bottle. It also has 5 grams of carbohydrates and 0.8 grams of protein with zero fat content.

The corona light alcohol content is low compared to Corona Extra. The ABV of Corona Light is 4.1 percent.

It’s a mild refreshing beverage that doesn’t lead to potential hangovers if consumed moderately. Plus, it is packed with antioxidants and probiotics.

Corona Light is one of the most popular beers from the brand and has been a beach staple since its introduction in 1989. Brewed with barley malt, non-malted cereals, hops, water, and yeast, Corona light has received a lot of praise and little criticism among beer lovers.

This is a lighter version of a brewery’s original lager, with a low alcohol content, fewer calories, almost half the carbohydrates, and a clean finish compared to other beers variants like extra and familiar. Moreover, while drinking the Mexican pilsner-style lager paired well with lime, one may have an exciting experience. However, the flavors are unadorned compared to the traditional Corona versions.

Originated in Mexico by Grupo Modelo in 1925, the Mexican brand is among the top-selling beer brands on the international market. It entered the U.S market in 1979 with Corona extra, its original brew, and currently exports the pints to more than 150 countries. It is also popularly known as the vacation and beach fun beer brand.

Interestingly, the Corona Concoction has a tinge of German origin, as many brewers working in the brewery in the early years were German immigrants. The main highlighted ingredients of their beer style are malted barley, rice, or maize with ascorbic acid(antioxidant) and propylene glycol alginate as a stabilizer with Bohemian and Saaz hops and yeast.

To have multiple flavors and styles, Corona just changed the quantity and variety of the ingredients. Since its inception, it has always been packaged in iconic shaped, clear transparent bottles. However, in 2009, the brand started offering its light-lager versions in cans.

The aptitude with which the brand had marketed its pale-colored beer in different flavors and sizes to its customers is outstanding. Corona has introduced more diet-friendly alcoholic beverages like Corona light and Premier with changing times.

Corona beer variants tend to be crowd-pleasers, and their fame extends through many generations. For some, it’s classics, and for some, it’s trendy.

The art of consuming beer is not known to all. In five simple steps, let us guide you through the perfect way to drink the Mexican lager Corona.

Before opening, the pint bottle should be properly refrigerated at an ideal storage temperature of 53 to 59 F (1–7 C). The beverage should always be kept in a dry, cool, and dark area. Avoid keeping the bottle in the freezer for more than 30 minutes.

Remove the bottle cap from the top of the ice-cold beer using an opener. Before serving, the temperature should be around 32 F (1–7 C), nearly 20 degrees less than recommended storage temperature.

These individual pints are available in cans and bottles only and drank as is. Don’t try drinking from a frosted mug, as when the liquid comes into contact with the glass, it spoils the flavor. A can/bottle is the best vehicle.

Corona light lagers are already a hit amongst the youth who enjoy the refreshing taste of the pint without getting washed out. The light Corona Beer is ideal for a small party at home or a movie date, family vacay, etc.

Although alcoholic beverages contain low ABV, they come with a strong health warning.

– Which Is the Most Popular Beer From Corona?

Corona Extra. One serving (from a 7 ounce bottle) of Corona Extra contains 71.1 grams of carbohydrates, 81 calories, and has 4.6 percent alcohol by volume.

– Does Any of the Beer Variant From Brand Corona Available on Tap?

All versions of Corona beer are available only in bottle/can form. None is available on tap, keg, or draft.

Corona is costlier than most beers. The reason is that the company has a production facility located exclusively in Mexico. The products have been made and directly imported from Mexico, thus justifying its price ticket.

How Do You Put the Lime in Corona?

There are multiple stories of how this tradition of putting lime on this beer began, but now it has become a ritual to serve lime with Corona. Moreover, there are many ways to put lime in the beer. 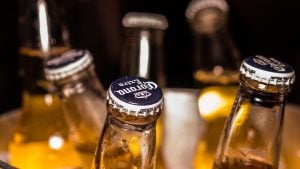 Beer diehards may have started to favor misty, bitter, dry, and slightly higher alcoholic beverages, the India Pale Ale (IPAs). They are barrel-aged stouts. But given on any hot summer day, Mexican-born light lager-style beer is still the best cold beverage choice among casual beer drinkers.

Corona premier is revered and marketed as a more sophisticated choice than its peers.

People who like fewer calories and carbs prefer these styles of beer. One can choose between these two variants of Corona beers based on the marginal differences we have pointed above. For us, both lagers are equally good and are a diet-friendly version of the iconic Corona.

Modelo vs. Corona Beer: Key Differences and Which One Tastes Better