Kolsch vs Pilsner is one of the famous arguments between beer lovers is one of, as both of which are German beers. The two beers look similar and have the same roots but differ in their styles, flavors, and aromas. You can notice the difference between a Kolsch and pilsner when you drink them, and the brewing process and style are also easily separated. Our comparison review will look at the main differences between a pilsner and a Kolsch, so take a look below. 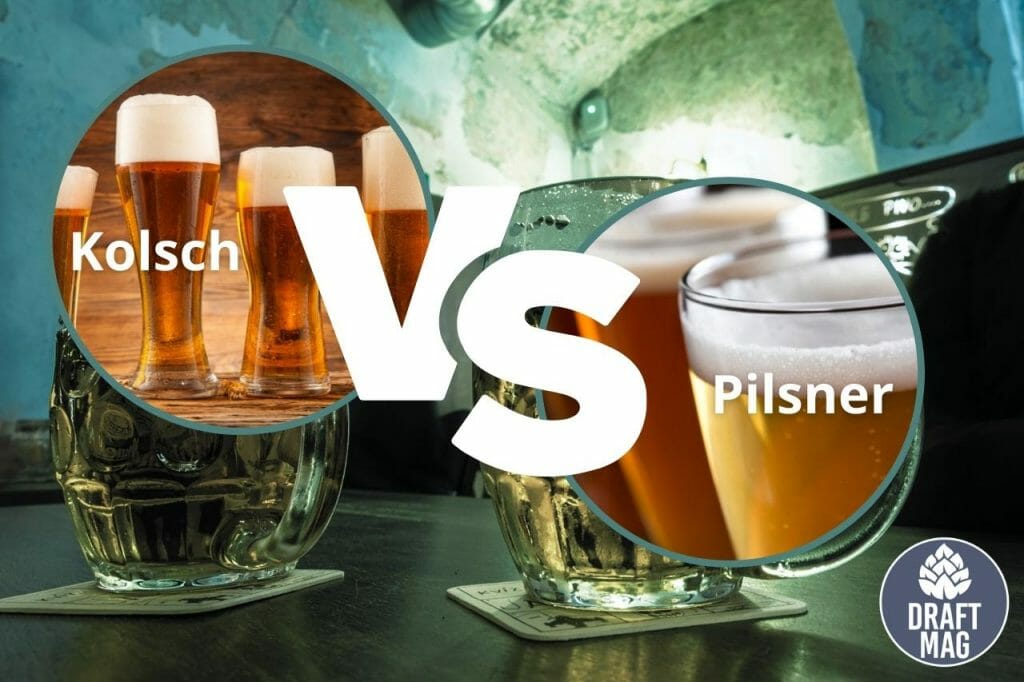 What Are the Differences Between Kolsch and Pilsner?

What Is Kolsch Best For?

A Kolsch is the best hybrid beer because it is a pale ale that is brewed in Cologne. It is a top-fermented beer made with ale yeast, pilsner malt, and noble hops and will be fermented at a warm temperature, giving it a fruity flavor.

A Kolsch is served in a stange glass, which looks similar to a pilsner glass. It has a tall and narrow design that shows the clear appearance of the craft beer, and it holds about seven ounces at a time. Kolsch is best served cold, from 38 to 45 degrees Fahrenheit, as this makes it sparkle.

If you have the Kolsch in Cologne, it will be served by Kobes who wear blue and white uniforms. The servers use a specially made tray with a coaster underneath the stage. When you’re done with the beer, you can place the coaster on top of the glass.

Overall, this beer taste stand out from other ales because of the lagering process. Despite being a top-fermented ale, the beer features some lager characteristics.

The Kolsch beer goes well with a wide range of foods as long as the flavor is not too intense; it overwhelms the beer. Have your Kolsch with foods like German sausage, nutty cheese, bratwurst with sauerkraut, and more.

The Kolsch emerged directly after the Second World War when the brewers needed to make something simpler to a lager. Since lager brewing arrived much later in Germany, a Kolsch was brewed more often than others.

The Kolsch style was established in the mid-80s, during the Kolsch-Konvention. This style states that the beer must be pale, hop-accented, top-fermented, and filtered, and the gravity must be between 11 and 14 degrees on the Plato scale.

Then, the Kolsch beer was given a Protected Geographical Indication when Germany joined the European Union. This limits the brewing of a Kolsch to Cologne in Germany, although American craft breweries have started making this beer.

In Germany, Kolsch is made based on the Reinheitsgebot law, a German beer purity law dating back to 500 years. The law states that you can only brew with barley, water, hops, and yeast.

When brewed in Germany, Kolsch is lightly hopped with fruits and malts in the flavor and a crisp finish. Depending on the brand, nonetheless, it can be fruity, peppery, herbal, or grassy. For instance, Kolsch in the USA is stronger and hoppier because brewers use non-traditional ingredients.

pilsner is best for being a pale lager with a refreshing and crisp taste. The craft beer is lightly hopped and bottom-fermented, with a moderate alcohol level and a malted barley backbone. The lightly kilned malted barley and spicy hops define the flavor and aroma of the beer.

There are different kinds of pilsners, with the German pilsner being the most popular. The American pilsner can also be defined as an American pale lager and originates from German immigrants in America. As for the American imperial pilsner, it has a higher ABV level. The Bohemian pilsner originates from the Czech Republic.

Overall, this beer comes with a pale golden yellow and snowy head, which means they are drier, and are crisp due to the cold lagering process.

You should serve your pilsner in a pilsner glass, which is tall and narrow, with a wide rim and a slim base. This enhances the beer’s snowy head and clarity. It should be served from 38 to 45 degrees Fahrenheit, same with the Kolsch.

In Germany, this beer is served with a slow, multi-stage pouring process. They pour the beer directly into the center of the glass so that two-thirds will be foam. Then, the foam will dissipate, and they serve more until the head reaches the top of the glass. Then finally, the glass will be topped off.

Pilsner pairs with the same foods that you can have a Kolsch with. You can have it with roasted chicken, meat, and fish. The food pairing also depends on the style. A Bohemian pilsner is nice with mild Thai, Chinese, and Japanese food, while German pilsners go well with spicy Mexican and Indian dishes.

The beer history of Pilsner also starts in Germany. Pilsners were first brewed in Pilsen (Plzen), a town that is now the Czech Republic. The brewery that first made the beer was Pilsner Urquell, which created the beer in 1842 and became popular immediately. The beer style spread throughout Bohemia.

Pilsner was the first pale lager to be created in Bavaria and Bohemia, and since it was different, it was a success. This led to adaptations like an American light lager and German Pils. The recipe for making Pilsner emerged as a need to prevent wasting beers that got spoilt because of poor storage.

– What is the Difference Between a Lager and a Kolsch?

A Kolsch is an ale and is not a lager. Unlike a lager, it is top-fermented and made with ale yeast.

Based on our Kolsch vs Pilsner article, the two beers have slight similarities but are completely different beer styles. The main difference is that the Kolsch is a top-fermented style ale made with ale yeast, pilsner malt, and noble hops, while a pilsner is a bottom-fermented lager made with lightly kilned malted barley.

While the Kolsch and pilsner beers are crisp, dry, and served in similar glasses, the Kolsch is less alcoholic and bitter. You can enjoy having both beers at any time, especially in Germany. Now you know their key differences, and how they aren’t brewed the same way, as Kolsch is often compared to a pilsner, although it is less bitter with a lower ABV. It is also similar to an altbier.