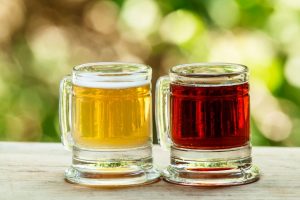 Light beer vs. dark beer is an ever-going debate among avid beer lovers. Numerous misconceptions circle around. Some of these are genuine, while others are just myths.

When it comes to the color, type, and flavor of beer, every beer enthusiast has preferences. Diverse light and dark beers with various alcohol levels, aromas, and hop combinations are now available.

Beer consumption is popular as ever, despite the more health-conscious lifestyle now sweeping the western world. This article will educate you on the distinctions between dark and light beer.

What Is Light Beer?

Unsurprisingly, a beer that claims to be healthier will pique the interest of health-conscious drinkers. But, what exactly is a light beer? What differentiates it from dark beer? Why don’t more breweries produce light beers if it’s so healthy and popular? The answers to these questions are more complex than you expect.

Light beer refers to any beer with a low-calorie count and, in some cases, a low alcohol content. Note that they may or may not have the same flavor, crispness or creaminess as a full-bodied beer. The term “light” refers to how low the calorie count is in a bottle or can of beer.

Any beer style, be it lager, ale, pale ale or Indian Pale Ale (IPA), can be a light beer if the caloric content is lower than in the original. Manufacturing beer with fewer calories, according to some brewers, is more tedious and demanding than brewing regular beer. Light beers are for beer lovers who want to gulp more without becoming inebriated or who want to consume fewer calories and carbohydrates.

Light beer is advertised as a lower-calorie, lower-ABV alternative to ordinary beer. We’ve established that light beer is “healthier” than normal beer, but is it healthy in its own right?

Beer, like wine, is considered to have several health benefits. Light beer’s lower calorie and carbohydrate content is a plus, but its flipsides include a higher consumption by regular beer drinkers. The consumption rate, at some point, will neutralize the health benefits one would have drawn from normal consumption.

Let’s talk about some of the enticing features of light beer:

A light beer contains less alcohol and calories per volume than a black beer. The faint, pleasant light beer taste can give the impression that you’re drinking something with less alcohol.

Pro Tip: Do not drink too much beer as it can cause intoxication, be it dark or light beer.

Light beer hues typically begin from a medium shade and lighten as they progress. On the lighter end of the spectrum, you will find colors like Light Amber, Gold, Pale Straw, etc. Some manufacturers add more colors to this list, such as rich gold or copper.

Light beer is typically refreshing, light, and easy to drink. Thanks to the hops, light beer tastes a little bitter. Plus, you can also occasionally taste the yeast.

Note that light beers will also have floral or fruity notes to them. Moreover, light beer’s aroma will also reveal a lot about its ingredients. In general, the smell of light beer is more crisp and light. 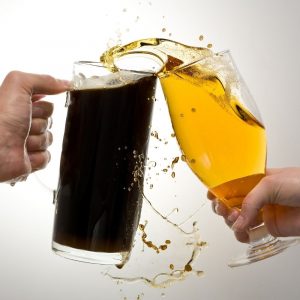 Darker beers are more likely to employ barley, while lighter beers go with hops. The hops are added in the boiling process for shorter periods of time and at lower temperatures.

Light beer, unlike dark colored beer, focuses on a delicate, refreshing flavor rather than deep, complex characteristics. It’s more likely to employ elements like fruit or flowers to change the taste of its products during the manufacturing process. As a result, breweries frequently add flower or fruit flavors to light beers.

What Is Dark Beer?

A beer with a light color doesn’t necessarily mean it is a light beer. Some beers are carbonated, light in color, and have a high calories content and ABV. Dark beer is a type of beer that has a richer flavor, increased alcohol, calorie and carbohydrate content. It’s much more robust than its light version and is usually more filling, with a powerful aftertaste that stays on the palate.

Dark brew beer gets its color from the darker malts in the brewing process. These darker malts are responsible for the beer’s distinct taste as well. Dark brew beers range in color from copper to dark brown. Malt flavors are often dominant — these include caramel, roasted nuts, coffee, chocolate, fruits, raisins, almonds, and currants.

The malt blend employed by the brewer for darker colors is more complex than most light to pale beers since the color is no longer dictated by simply one type of malt.

The malt bill is primarily due to the light malts (used to make light beers), with dark malts adding color and flavor. Although it isn’t the most popular beer out there, it’s pretty popular among beer connoisseurs who prefer to sip and taste their beverage. Did you know? Dark beer warms the body and is excellent for colder weather!

What makes dark brew beer so special? Let’s find out!

Keep in mind that all dark beers do not have the same alcohol level. Instead, the alcoholic strength of the beer is determined by the type of beer, the brewer, and the brewing method rather than the drink’s color.

Certain beers may have similar hues and flavors since amber beers are listed in both light and dark beer categories. Usually, there are only slight differences in beer hues within the same category.

Dark colored beer is meant to have intense flavors and ingredients. Many darker beers, such as stouts, have a nutty, chocolate, or coffee flavor.

Their strong flavor leaves a lingering residue on your tongue. Many stouts and porters, for example, include coffee and nut additions. Dark brew beer may have a bitter or roast flavor and a dark chocolate fragrance in some situations.

The dark colored beer uses a more complex blend of ingredients than light beer, owing to its pungent flavor. These beers should generally contain more barley than light beers.

However, darker beers take longer to roast. Regardless of the grain mix, the more grains you prepare at this phase, the darker the beer will be. 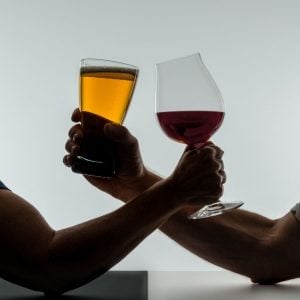 So, what exactly is the difference between light and dark beer?

If you prefer dark beer over light beer, you’ll probably love it with pork, smoked meat, beef, grilled sausages, or turkey. This beer goes well with hot and spicy foods since it enhances the flavor.

Contrary to popular belief, bland foods such as fish, pizza, chicken, or pasta go well with mild wines. Avoid dark beer when eating such a meal since it can mask the delicate flavors of these dishes.

Light beer contains fewer alcohol, calories, and carbs than regular beer. All these are potent reasons for light beer’s popularity! On the other hand, dark beer has more alcohol and calories simply because it contains more components.

– The Winner Is… Dark Beer!

Regardless of whether you prefer light or dark beer, it’s good for your health. Specific tests have revealed dark beer to be safer than light beer. It has more antioxidants, boosts mental performance, and is good for the heart muscles.

Dark beers also have more iron content than light beers — iron is necessary for hemoglobin and myoglobin production and oxygen delivery to internal organs and muscles.

Dark beers are known for their rich, complex flavors and aromas. They are usually hefty, so you should sip them, while light beers are pleasant and easy to drink.

Also, dark beers serve you best when you’re home, during cold weather, and after a nice, hearty meal, whereas light beer is best for parties, social gatherings, and outdoor activities.

Beer differences stem from the differences in their color, grain combination, alcohol content, taste, among others. The differences between dark and light beer are plenty–from their ingredients and concentration to their color and heaviness. 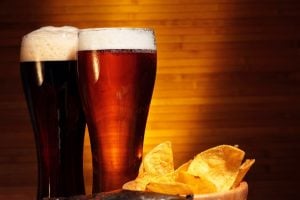 Beer drinking is a very special and almost euphoric experience. Only by sipping gently can you appreciate its delicious diversity. Like wine, good black beer should be tasted, smelled, and savored slowly.

The only way you can figure out which beer kind is for you is to try different sorts, styles, and flavors of beer. The dark beer vs. light beer debate doesn’t have a clear winner, and it all boils down to personal preference.