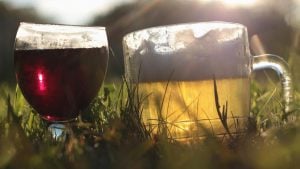 Mixing beer and wine is a controversial topic that a lot of people are against. While it is common to receive warnings on mixing the two, science paints a different picture. Scientists say it does not matter and we will tell you why in the sections up next.

If you are curious to learn about the specifics of this and more, keep reading!

Drinking Beer And Wine: Which One Should You Have First?

Leaving science out of the picture, folklore has a different suggestion. In some areas, drinking beer before wine is safer because of the low alcohol content. Furthermore, in the olden days, beer was not as strong as some of the ones we have now, beer was light and made a good start to a day or night of drinking. By the time you were done with the beer, you were ready for wine, which has a higher ABV.

By ready, we mean that you feel buzzed after the beer and when you hit the wine, you are happy with just one or two glasses. According to this myth, drinking wine before beer makes you feel drunker.

This is because, by the time you finish the wine, you are already drunk and have no control over your drinking— you are just elated. If someone keeps handing you a beer after getting tipsy on wine, you are prone to keep drinking.

Actually, the carbonation in the beer forces more alcohol into your body due to an increase in pressure on the stomach lining. While the thought pattern makes sense because carbonated drinks make you tipsy faster, science busted the myth that the order of the drinks matters. You can drink beer and wine in the order that you prefer.

Beer And Wine Together: Will It Send You To The Hospital?

No, it will not as long as you drink in moderation. Suffering from hangovers or alcohol poisoning can land you in hospital so avoid overdrinking. Keep hydrated and always make sure that you eat properly before engaging in high amounts of alcohol. Hangovers vary in intensity but it is still an annoying feeling that may leave you sick.

It may be hard to control alcohol intake once you are tipsy, but you can try. A way you can do that is to always have water on your table as you drink. At least this way, you won’t feel the intense effects of a hangover.

Snacking and hydrating while drinking also prevents the alcohol from irritating the stomach. If you don’t, however, that could lead to vomiting and corrosion of the stomach walls.

Wine is an especially known culprit for the worst hangovers in history due to congeners. Congeners stem from the process of making wine and dark-colored liquor; in high levels, they make your hangover worse. Scientists are yet to find why congeners affect the body and all they know is that there is a correlation.

Can You Mix Beer and Wine Without Experiencing The Worst Hangover?

Yes, you absolutely can have beer and wine together! However, there is a catch: it does not matter if you mix them but it matters if you drink too much of either one combined.

Say, you had a glass of wine with dinner before going to a party and you drink some beer at the party; this does not mean you will end up superiorly drunk. If you happen to have a bottle of wine for dinner then go through several cans of beer later, you are definitely due for a nasty hangover later.

You can drink either beer after wine or wine after beer with no devastating consequences as long as you drink in moderation. Too much of anything, even low percentage alcohol, will have significant effects on your body.

To back this up, scientists launched a study to investigate if having wine or beer before the other had an impact. The results indicated that there were no major differences regarding the order of consuming the drinks, what mattered was how much they drank. You will still get a hangover if you overdrink, and that is why health experts recommend staying hydrated while drinking to mitigate the hangover effects.

Are There Drinks That Mix Beer And Wine?

Yes, there are drinks in the market that mix beer and wine, and they are called hybrids. The mixing of these two types of alcohol came out of the need to experiment, especially in the craft beer scene. The mixing of grapes and beer is not new; in fact, there are traces back to the Bronze Age. 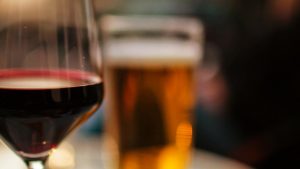 In 1999, Dogfish brewed its own hybrid by the name of Midas Touch that is a mix between wine, mead, and beer. These hybrids include wine grapes in the mashing and fermentation process, and then the liquid ferments in barrels to impart the wine flavor. This results in a beer-looking but wine-tasting liquid.

Apart from the hybrids, you can also get wine and beer cocktails such as the Black Velvet that features white wine and beer. If you are daring, try the Hangman’s Blood cocktail that features Guinness, port, champagne, and shots of different spirits.

Beer and Hybrid Brands on the Market

To prove that beer and wine can mix into a delicious drink, several brands have created hybrid drinks that are already available in the market.

Some of the more notable ones include:

This is among the older hybrids as it debuted in the market in 1999. This drink offers a nine percent ABV with sweet notes on the tongue followed by a dry crisp finish.

The alcohol, despite its ABV, is subtle and you might even mistake it for a fruity IPA due to the flavors and aroma. You can also try other Dogfish Head Brewery products as they have many drinks under the oenobeer category.

Featuring white grapes and unmalted wheat, Cantillon Vigneronne is not a strong drink but it is flavorful. It has an ABV of five percent and it is a little funky on the nose but nothing intense.

You will pick up a sweet flavor from the wine followed by a dry and crisp finish, especially when it’s served cold. Considered the grandfather in the oenobeer scene, the Cantillon Vigneronne is worth a try despite its premium price.

This is another good mixture of red wine and beer consisting of sour beer and pinot noir grapes. It is a 6.5 percent ABV drink presenting sour notes with a hint of sweetness.

From the packaging to the flavor, this drink will keep your senses engaged. It also offers notes of the oak barrel used and a faint funk from the yeast. It is a relatively affordable and accessible drink depending on where you live.

Made by Jester King Brewery, the fermented beer sits in oak barrels to age until it’s ready. The drink also features Muscat grapes that give it a distinct flavor and taste. You will pick up the aroma of the grapes when you open the bottle together with a little funk.

Furthermore, the drink is sweet but tangy, finishing off with a dry and clean taste. It is a product from Texas with an ABV of six percent and comes in a 12oz. bottle at a premium price.

This is a 6.7 ABV drink by the DE PROEF BROUWERIJ, which is a Flemish company with several drinks under their belt.

What’s more, the Mikkeller Riesling People is moderately sweet and presents notes of hops, citrus, grapes, tropical fruits, and malts. It does have some sour notes but nothing unpleasant, and to make matters better, it is affordable.

Victoria from the Allagash Brewing Co. is a perfect mixture between white wine and beer. The drink features chardonnay grapes, pilsner malt, hops, and wine yeast.

It has a 7.3 percent ABV has a medium body, tastes sweet, and possesses a faint alcoholic taste. You can purchase the sizeable 25oz. bottle at a budget-friendly price. 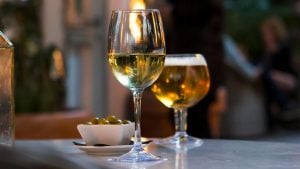 It is easy to listen to people’s opinions about different matters, but sometimes proof is necessary. In this case, science provided proof that the order in which you take your drinks has little effect on your hangover.

Finally, keep the main points of our article that follow closeby whenever you get in a debate about this matter with your friend group:

Now that the myth behind drinking beer and wine burst in flames, you can go ahead and indulge responsibly in these drinks with less worry.