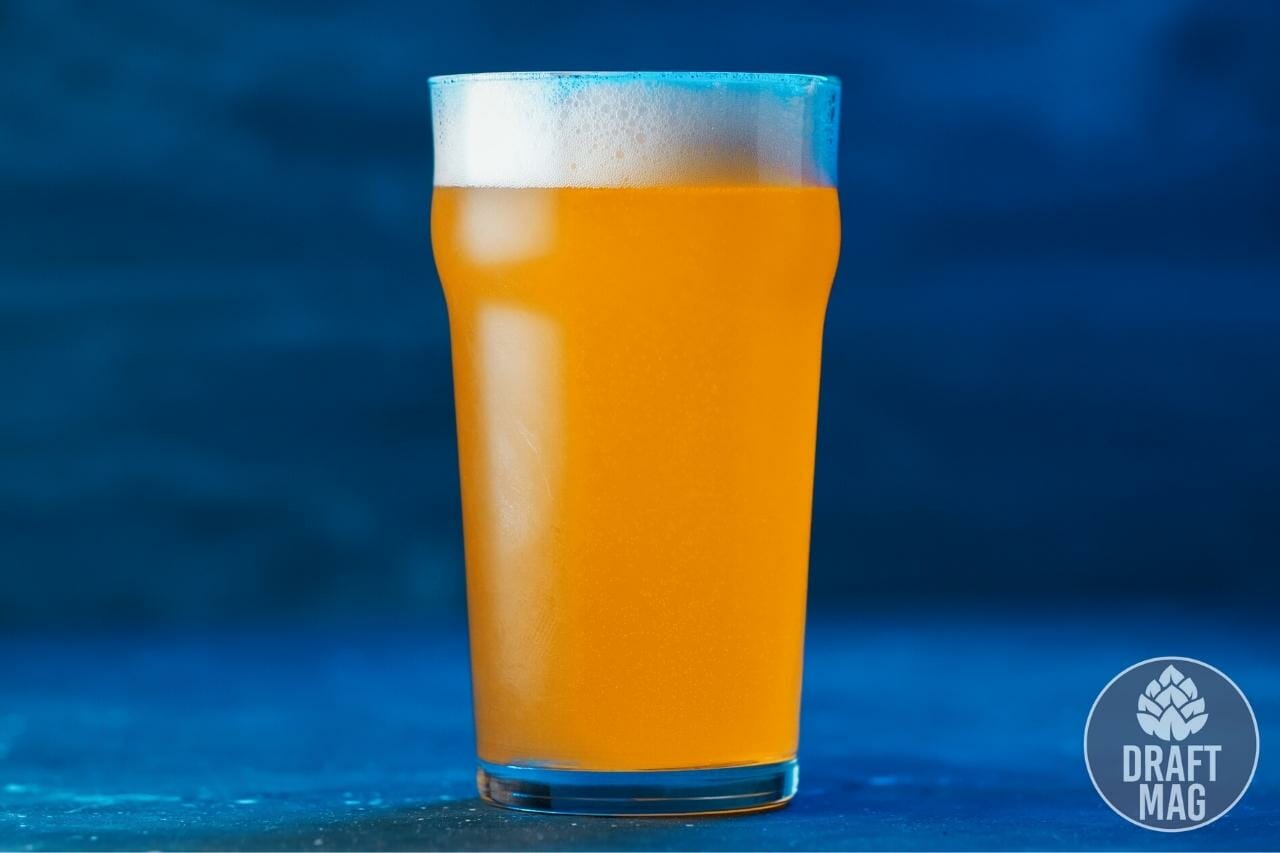 Drinkers are now looking for low calorie IPA drinks after years of creamy, juicy, and fruity IPAs. Low-cal IPAs usually feature about 4 percent alcohol and 100 calories in a 12-ounce can.

We have compiled the top low calorie IPAs in this complete guide, so continue reading to know more!

This guide has a list of the top 18 low-calorie IPAs, so there’s definitely something for you here.

It’s not surprising that Dogfish Head Slightly Mighty is at the top of our list of low-calorie IPAs, as this popular beer is well-known among enthusiasts. It features 95 calories per 12-ounce can, while the ABV is 4 percent.

Dogfish Head is a well-known craft brewery that heavily influences craft beers. Despite this, the brewing team headed by Sam Calagoine continues to release impressive brews that feel great on the palate.

The Slightly Mighty brew is brewed with monk fruit, a sweetener that adds no calories to the brew. This gives it an underlying richness that most low-cal IPAs don’t have. Its tropical fruit flavor is well-balanced with its sweet IPA body, giving you a unique beverage.

Next on our list is the Light Hearted ale from Bell’s Brewery, a delicious low calorie IPA well-known for its delicious flavor. The beer features a 3.7 percent ABV and 110 calories, so you can have a few cans and still enjoy the beer.

Bell’s Brewery is well-known in the Midwest, especially for having some of the best IPAs in the US. They brewed the Two Hearted Ale, and then to offer a low calorie beer option, they then trimmed the ale to create the Light-Hearted beer.

Light-Hearted features a hazy appearance with a bright yellow-orange color. Its hoppy flavor involves Centennial and Galaxy hops. While the latter offers a tropical and stone fruit kick, the former offers an orange and piney flavor to produce a delicious ale.

Another India Pale Ale with low-calorie content is the Deschutes Wowza, a hazy pale ale. The beer features 4 percent alcohol in the standard 12-ounce can and 100 calories.

Deschutes Brewery focused on a New England IPA style for the Wowza low-calorie IPA, so the beer is bursting with berry and tropical fruit flavors. Since it’s a hazy beer, you will notice a cloudy appearance as you pour it into a cup.

The beer is made with Simcoe, Callista, Citra and Cashmere hops, which come together to give you a delicious and sweet package. The carbonation also caresses your tongue and adds a layer of crispness. There’s another feeling of crispness as the finish is quite dry as you swallow the beer.

Another low-cal IPA that gets the flavor right despite the low calories is the Weldwerks Fit Bits. The Fit Bits beer features 130 calories in its 16-ounce can, which means with every 12 ounces you drink, you get 100 calories. The drink features a 4.2 percent ABV.

The Fit Bits is a good choice when looking at the most drinkable beer on this list. The New England-style IPA has a hazy, juicy and soft character, making it go down easy and quench your thirst. It’s not surprising that Weldwerks did well with this low-cal IPA, especially since they made one of the best NEIPAs out there, the Juicy Bits.

Fit Bits is made with top-quality hops, including Citra, Sabro and El Dorado, enhancing its fruity flavor and aroma. You might taste a low bitter flavor, but this is overshadowed by hints of ripe mango, vanilla and orange.

The Cigar City Jai Low is another impressive low calorie beer that health-conscious beer lovers will enjoy. As some of the best IPAs also come from Cigar City, it’s not surprising that Jai Low is heading the market.

Although you might notice the English character, the beer is hopped and brewed with American methods. The strong hop process is obtained from Simcoe, Motueka, CTZ, Amarillo, Cascade and Centennial, which provide IPA citrus tones with the beer flavor. You might also taste hints of dank resin.

The Firestone Walker Flyjack has one of the lowest calories and alcohol contents in this list. The low-cal IPA features 96 calories and a 4 percent ABV in a 12-ounce can or bottle.

Firestone Walker is another well-known brewing company, and they did a great job brewing a light, low-cal beer with an expressive hop profile. The beer has a balanced body, with many oats and wheat in the flavor.

When you pour it out into the cup, you notice its roundness, medium body, and hazy, bright appearance. It is also hop-forward as it contains Cascade, El Dorado, Mosaic, Sabro, Callista, Chinook, Strata and Idaho 7 hops. This also gives it a complex flavor.

Another hazy low-cal IPA is Oskar Blues One-Y, popular among craft beer lovers. The beer features 100 calories, as stated in the name. It also has 4 percent alcohol content.

Despite its low calorie and ABV levels, the beer does not appear weak or light. Instead, it is still hop-forward and is a successful launch from Oskar Blues. The beer has a slightly hazy appearance with tropical hints caused by El Dorado, Citra and Comet hops.

Oskar Blues is a pretty popular brewing company, as the Colorado-based brewery has been releasing hoppy beers since 2002. The beer is now distributed around the US, with four breweries in three different states.

Those who want a delicious IPA with well-balanced hops and a calorie level below 99 will enjoy drinking the SoundBoard IPA. This hazy IPA packs a punch and works great in quenching your thirst.

The beer is brewed by DESTIHL, which has a wide range of beer styles in its collection. When it comes to their IPAs, you can expect them to be well-balanced, and their hops pack a punch. The same is done for the SoundBoard, and luckily, you don’t have to give up the flavor for fewer calories.

The SoundBoard Lo-Cal Hazy IPA is brewed with Citra, Summit, Cascade and Simcoe hops, which are well-known to create a classic American IPA. This beer is not thin but has a smooth and dry body. You can also expect hints of bitterness from IPAs, with tropical fruit and citrus flavors.

The Odell Good Behavior IPA features 110 calories in a 12-ounce can and 4 percent of alcohol, making it qualify as a low-cal IPA. Not only this, but the brew is pretty impressive with well-integrated flavors, so drinkers can enjoy it.

Brewed by Odell Brewing Co in Fort Collins, the beer will meet you first with an alluring and soft aroma of tangerine and kumquat. The beer features a dry body, and the flavor is mineral-focused, giving you a unique and delicious flavor.

After drinking the beer, you can enjoy the lingering taste of fruits, although it’s a bit dry. The beer also has a medium level of bitterness that is expected from IPAs without overshadowing the fruity flavors.

The Harpoon Rec League is next on our list, which offers 120 calories and 3.8 percent ABV in a 12-ounce can. It’s still within the range for low-cal IPAs. This beer is a lighter version of a standard Northeastern IPA, and any well-versed beer drinker will realize this. Despite the low-cal character, it is still flavorful. 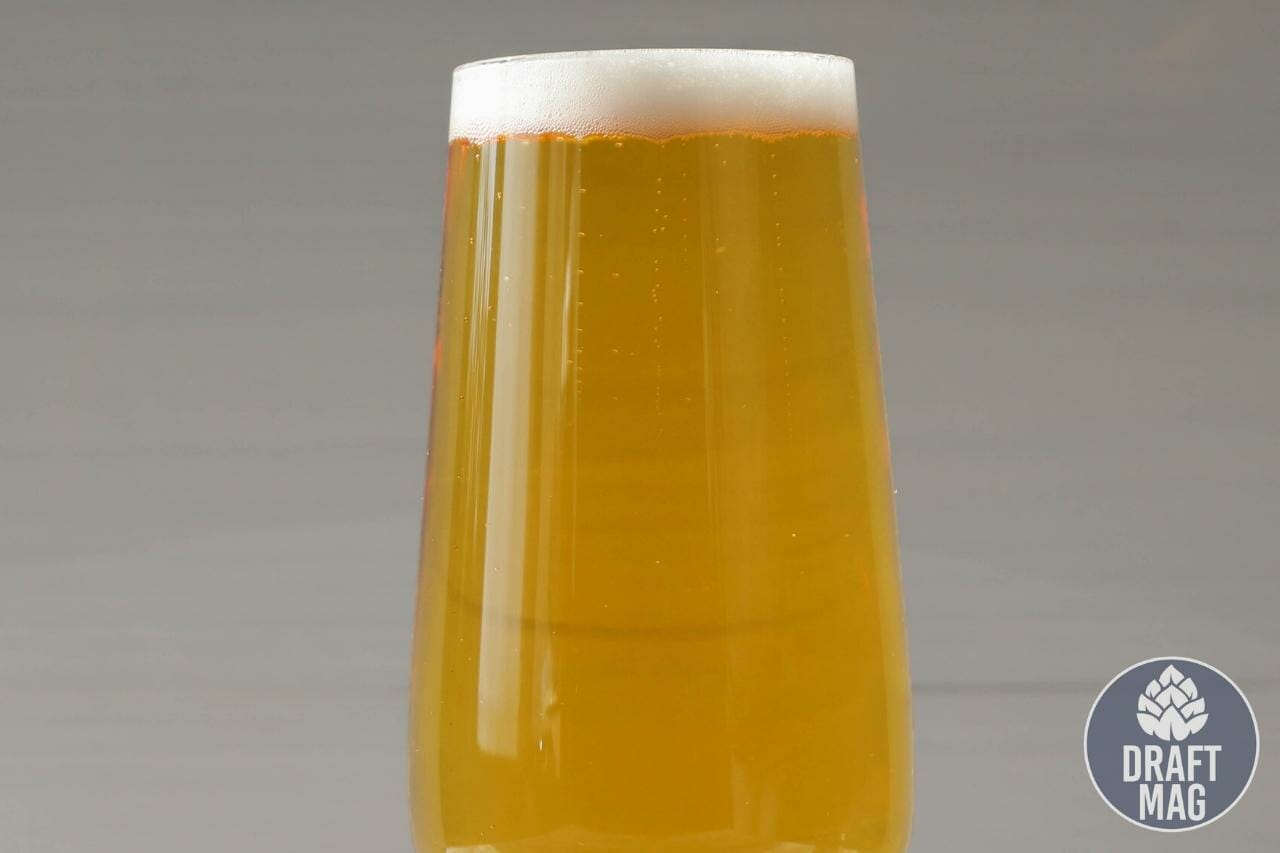 The beer is brewed with chia, buckwheat and Mediterranean Sea salt, a perfect choice for those who want to drink a unique IPA.

The hops are noticeable in the taste but don’t dominate the other flavor components. It is also great for those who want to quench their thirst with beer.

The DayTime IPA from Lagunitas was first released in 2010, but it was not yet a low-cal beer, as it featured 130 calories and 4.6 percent ABV. At this time, session IPA beers were very popular. But they later cut the calories down to 98 and the ABV became 4 percent.

Lagunitas did that by keeping the hops the same while changing their mashing process and reducing the amount of sugar in the beer. It has a crisp and hoppy flavor on your palate, with hints of grassiness and fruit that help you enjoy the beer. The DayTime IPA is great for day drinking.

If you’re looking for super low ABV in your low-cal IPA, the Goose Island So-Lo is ideal. The beer features a 3 percent alcohol content and 98 calories in a standard can. The low-calorie IPA offers a refreshing and delicious flavor even if it has a small amount of ethanol.

The So-Lo beer has a crisp feeling on your palate, with less bitterness than you’d expect from an IPA. It also has a very light body, with an impressive flavor despite this. You can enjoy a dry finish and floral aroma when you drink it.

The Two Roads Wee Demon beer is a pretty light beer, but you’ll be surprised to see how complicated the flavor profile is once you open a can. Made by a popular Connecticut-based brewery, the beer features 3.8 percent alcohol and 95 calories.

The low-cal IPA is brewed with Ekuanot, Simcoe, Azacca and Citra hops, which offer medium hoppiness to your flavor. You will notice the orange citrus flavor and hop-forward bitterness when you first drink it, but it finishes with a mild malty flavor that makes you enjoy the beer a lot.

Another low-calorie IPA is the Hop Skinny IPA made by Community Beer Co. The brewing company describes it as Texas’s first craft lifestyle IPA, but it also qualifies as a low-cal beer since it has 95 calories and a 4.2 percent ABV.

The beer features a crisp and zesty flavor that caresses your palate. You will notice a strong lemon flavor from the hops that make this beer taste great. It is also very drinkable like many IPAs, but you might notice some hints of crackers from the malt flavor and light herbal flavors.

Although this brew is further down on our list, the Easy Ringer beer is still one of the top low-cal IPAs you can get in today’s market. The IPA has 96 calories, while the alcohol content is 4.3 percent. Its flavor will remind you of a blonde ale, except it is very sessionable.

It is brewed with Strata and Citra hops, giving you mild berries and passionfruit flavors. It also includes Cascade hops, which give you citrus and pine flavors.

The Summit Triumphant features a 4 percent ABV and 95 calories in its 12-ounce can. Those who have tasted the Extra Pale Ale from Summit, its flagship beer, will notice similarities in the flavor and aroma.

Both beers have a backbone of toast-like barley, balanced with classic and experimental hops. The beer tastes like a classic American pale ale, but it’s a juicy, low-cal IPA. This makes it stand out from the modern-style hazy IPAs.

You can also try out the Sixpoint Trail Haze IPA if you’re looking for a low-calorie brew. The beer has 99 calories and 4 percent alcohol in the 12-ounce can. It was designed by Sixpoint in collaboration with REI and offers a refreshing flavor.

The light-bodied low-cal IPA has thirst-quenching qualities, making it perfect for you to drink on a warm and sunny day. It also has heavy pear and peach flavors, and the hoppy flavor offers a strong and juicy punch.

The final item on our list is the Sufferfest Gut Check, which features 100 calories and 4 percent alcohol. The Gut Check beer is a pretty inventive low-cal IPA, which combines an apple cider vinegar flavor with hops.

The subtle flavor of vinegar will bring the flavor of the hops out, and it offers a crisp finish. It is well blended with the citrus flavors and has a hint of bitterness, as expected from IPA. There is also a hint of apple juice. 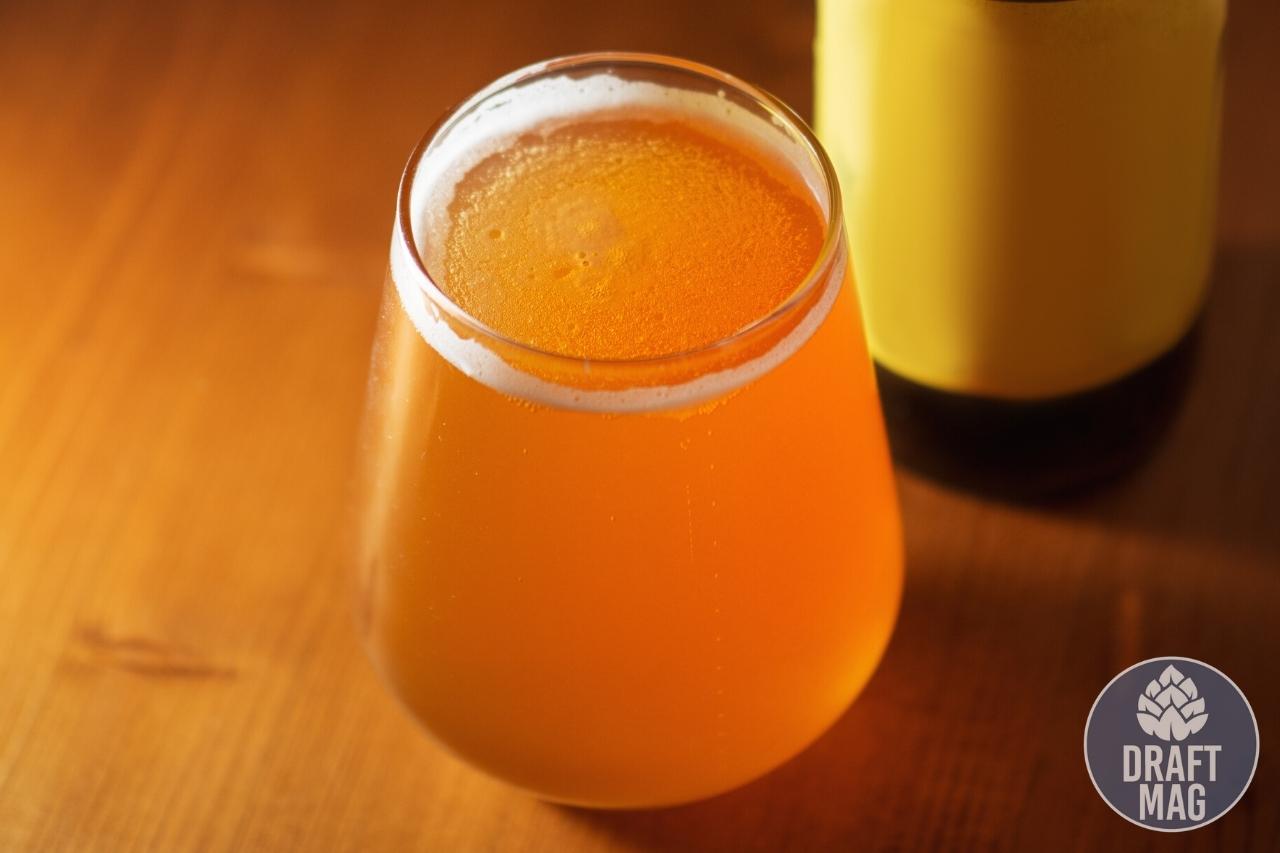 Low-calorie beers are the ideal choice for those who want to enjoy the real character of beer without consuming too many calories. Here’s a rundown of what we looked at in this guide:

Next time you’re looking for a delicious low-cal IPA, you can check out those in our complete guide.