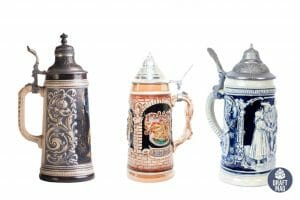 Fortunately, experts know how to differentiate authentic beer steins from cheap copies and we have compiled some of the most useful tips and tricks for you in this guide.

What Is a Valuable German Beer Stein Marking?

German beer stein markings are specific valuable signs and symbols on authentic or traditionally made German beer steins; the markings can tell the country of origin, capacity, or manufacturer name. It requires a keen eye to identify German steins as they come in different sizes, shapes, and materials.

Most authentic German beer steins are made of metal, earthenware, ceramic, porcelain, silver, or glass. They have a hinged lid, handles, and hand-crafted body. Here are some valuable German beer stein markings that separate authentic ones from commercially produced ones.

– Markings at the Bottom

Markings at the bottom of the German beer stein tell a lot about the origin, manufacturer, capacity, and edition of the stein, but to identify these markings, you have to have a keen eye. Here are some important markings you will find on a traditional German Stein.

The first thing you have to notice is where it was made. If the label says “Gemacht in Deutschland,” it means the stein is made in Germany. Similarly, labels such as “handarbeit,” which means “handmade” in German, point at its local origins. A valuable German beer stein will always have such markings at the bottom.

In contrast, avoid steins that do not have any mark at all or have a “Made in China” or another country’s label.

The next marking you will notice will be the company logo or brand name. Sometimes, you will see numbers, but chances are that they don’t have any meaning.

At times, a model or a form number can be seen on the stein markings, which are helpful for manufacturing purposes only. Other steins will have capacity or volume measurements written on the bottoms as well. Often, artists who designed or painted the stein also put their initials on the stein.

Sometimes with a collector or limited edition stein, you will see the maximum number of such steins made in total for that specific model. For instance, the limited edition markings mostly number in a couple of thousands. However, it can be smaller amounts as well, especially for the fine collector beer steins.

These are only a couple of hundreds in total or made on special events such as 212 years Oktoberfest, which has only 212 pieces of steins. So to conclude, the lower the stein number, the higher the chances of it being among the first ones made. Similarly, the lower the number, the rarer the steins, which makes them the most valuable steins of all time.

In the next stage, look in the interior for the hand-painted lithophane at the bottom. These unique, raised, and imperfect markings are present on nearly all German steins. However, its presence doesn’t mean it is an old beer stein.

You can look at the bottom of the beer stein while holding it facing the sunlight. If you see nude or provocative pictures, it is a fake stein. No German steins, new or old, contain nudity and provocative pictures as they prefer painting modest scenes. Also, as the lithophane is hand-painted using very long brushes, it turns out not so perfect.

The raised scenes on the interior of the German steins are often of angels to give the drinker the stein luck.

A close examination of the stein’s exterior reveals a lot more about it. Mostly, old German steins have hand-painted pictures on their exteriors. And as these scenes are hand-painted or hand-crafted, they are often raised and are not perfect. Sometimes, some steins have raised edges, which reveals the stein is valuable.

Additionally, if the exterior contains one of the following depictions, the chances of it being vintage increases:

The valuable German stein comes with a metal lid. It is often decorated to complement the painting scenes on the main body. Often, the inside of stein lids is lighter compared to the outside; as the exterior is exposed, it oxidizes at a faster rate than the interior.

Moreover, the lid’s design should be in accordance with stein’s overall design to ensure the stein is intact and valuable.

German steins were originally developed for regular use, so if you come across faded colors, chipping, or any other minute imperfections, it is entirely normal with antiques.

However, the stein’s overall condition does affect its value. Your piece will be more valuable if it meets some or most of these conditions:

Intricate designs featuring folk tales and battle scenes carved on the wood are something truly unique. These steins showcase the spirit of Germanic tribes and craftsmanship at best. Some carved steins fetch more value than porcelain, glass, or metal ones.

Depiction of patriotic heroes and animals on pure ivory white looks unparalleled, especially when it is on a beer mug. Ivory beer steins are very liable and sought after. However, be cautious about the source of ivory. It should not violate any law or harm animals at risk.

These steins were personalized to commemorate the war heroes of Germany. Regimental beer steins have rank, names, and status of soldiers embossed on them. Like medals, these steins become meaningful for families and even passed down to generations.

Mettlach steins are akin to quality and value. From 1880 to 1910, manufacturers Villeroy and Boch Co. Mettlach are credited with producing some of the finest steins in German history. Every stein has an original design and well-defined markings for easy identification. To date, there is a ready market for Mettlach steins due to their excellent quality. Moreover, it comes in all designs, sizes, and shapes.

This is one of the oldest versions of steins. Glass-blown steins come in various colors, including cobalt, brown, green, and red. Different colors were a result of using corresponding salts. Today, you can still find some pieces in the market.

As the name suggests, character steins are made in the shape of any structure, animal, or even person. Handcrafted steins in this category are most unique, personalized, and creative.

In the aftermath of the bubonic plague (black death), which eradicated almost half of Europe’s population, strict sanitary measures were taken. One such law mandated that food and beverages be covered to protect them from flies or other types of contamination. In pursuit of this, the steins with hinged lids evolved.

According to another theory, earlier folks used to drink beverages from mugs made of earthenware or wood, but both were porous, difficult to clean, and with regular use, grew rancid. So, to replace these mugs, steins or stoneware mugs were produced by firing earthenware mugs at higher temperatures. They were stronger, non-porous, easy to clean, and resistant to breakage.

Here is the timeline of German Steins:

The broader price range for Antique German steins ranges from $50-$5,000. However, many traditional hand-made steins sell between $100 to $500. Any precise information regarding a specific piece alone can make a difference of thousands of dollars.

For instance, a 17th-century American tankard belonging to a family for generations got sold at $140,000, whereas a Marzi and Remy stein (the 1850s) which lacked proof of origin, managed just $150.

So, to determine the correct value of German beer stains, you must look for markings to ascertain how old the stein is as well as its origin. It is vital to know how to differentiate authentic German stein from counterfeits. It not only helps in the correct valuation but may help you pick up the authentic piece of your choice.

This complete guide laid down a few expert tips on how to identify valuable German beer stein markings. So let’s sum up to make sure you shop or discuss German Beer Steins like a pro: 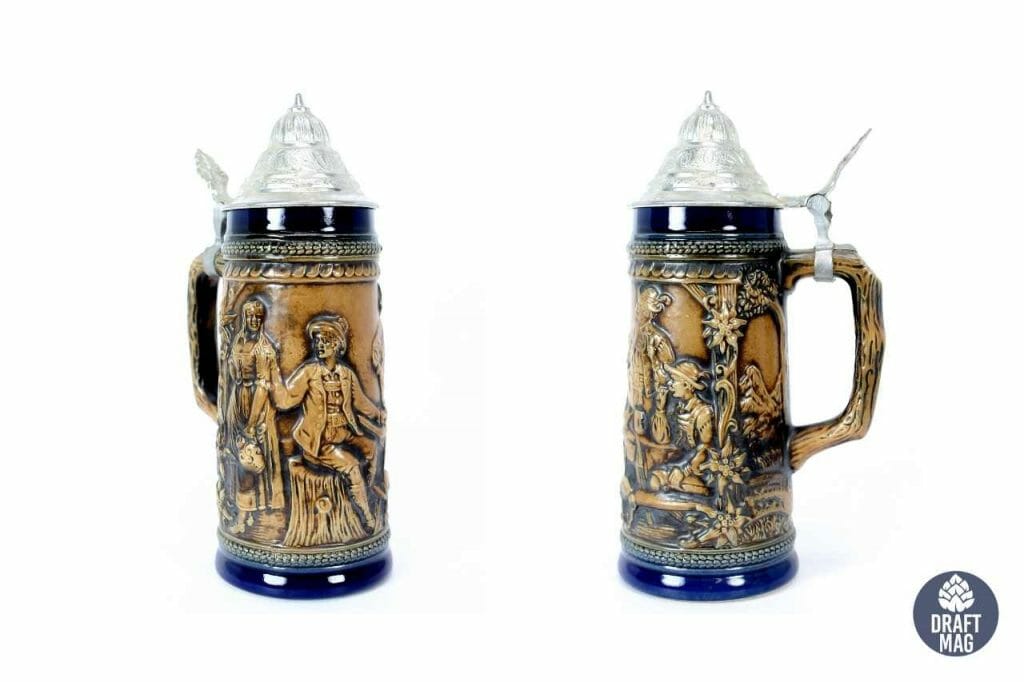 For some, a German beer stein may only be another piece of porcelain mug, but those who know its long and rich history realize its true value. The intricate designs and hand-made paintings on every German stein tell a different story.