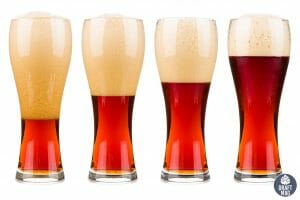 The Whale’s Tale beer continues to catch the eye of beer lovers with its unique malty taste balanced with hints of fruity hop aroma. This England-style pale ale from Cisco Brewers was the company’s flagship brew in honor of Nantucket’s whaling history.

It is readily accessible in bars, restaurants, pubs and beer stores to delight your taste buds whenever you’re up for it. In this complete review, we’ll discuss the various features of this beer.

We have you covered if you are wondering what this beer tastes like. Here, we will spell out everything you need to know. Let’s get to it!

Generally, English-style pale ales appear golden to amber-colored clear brews with English-variety hop and malt character. Cisco Brewers Whale’s Tale Pale Ale is no exception, as it pours with an attractive copper color while displaying mild haze. Even though this brown ale is not completely clear, it is still within the range of the style.

On the nose, this beer’s aroma is quite distinct. You’ll find that Whale’s Tale beer has a lightly sweet malt with mild hints of straw aroma. This aroma is overlaid with floral and spicy hops.

When you pay closer attention, you may begin to notice a soft toast with crisp caramel malts aroma. You might want to try this brew and get rid of your doubts.

Whale’s Tale is moderately polished, justifying its medium body and slight haze. However, this beer displays a creamy feel on the tongue with a smooth texture and lightness.

As such, it is often compared to Fiddlehead beer. Besides, it provides a semi-dry finish as the bitterness rises above average. In a nutshell, Whale’s Tale beer has a moderate mouthfeel with a medium carbonation rate.

Whale’s Tale’s interplay between malt and hop bitterness can be exhilarating alongside the alcohol notes and light spiciness that peek through. So we suggest you grab this beer from time to time to savor its fullness.

It gives a bittering hop flavor with hints of crystal malt, caramel and vague fruit, which livens you up. Further, while savoring this flavorful beer, it also provides a blend of citrus bite, mainly lemon and malt sweetness. The sweetness lingers a while to balance the rising hop bitterness.

Whale’s Tale is highly credited for its easy drinking when served chilled and its versatility in terms of pairing with a variety of cuisine. This beer’s flavor profile makes it fantastic with food like beef, salads, turkey, garlic steak fries and burgers topped with cheese. We suggest you try this with a pint glass or mug. Above all, always remember to drink in moderation.

This beer has a prominent dry hop bitterness generously balanced with ample malts, thus giving this pale ale an English-styled poise. Take a look at the ingredients below:

In addition to these ingredients, other aromatics are infused within this beer to give various notes and flavors for satisfying drinking experiences.

Concisely, the malt is mashed at 154 degrees Fahrenheit then boiled for 90 minutes while adding hops as noted. Then the mixture gets fermented at 70 degrees Fahrenheit for four days. Afterward, it gets racked with dry hops, and on day 12, the brew gets bottled with corn sugar.

Whale’s Tale Pale Ale alcohol content is 5.6 percent. Thus, it is mild and will not quickly get you intoxicated. It also has an IBU of 40, providing neutral sweetness to satisfy most drinkers but with a distinctively subtle bitterness on the finish.

Whale’s Tale Pale Ale sprung out from Cisco brewery Nantucket Vineyards, established in 1996 as an ode to Nantucket’s maritime history. The brewery was founded by homebrewers Randy, Wendy Hudson, Dean, Melissa Long and Jay Harman. You can quickly tell the theme from the aesthetics of the sea blue color with a whale’s tail on this beer can or bottle.

Nantucket is well known for its rich history in the whaling industry. The island claimed over 150 whaling vessels out of the 250 whaling ships dominating England’s whaling industry in the 1700s. We suggest you see the thrilling movie “In the Heart of the Sea” to capture the events that occurred back in the day.

You can also try other popular brews like the Cisco Grey Lady, Cisco Brewers Summer Rays Golden Ale and Shark Tracker Light Lager. Additionally, you shouldn’t miss out on the Cisco Brewers Variety Pack. It includes a selection of Cisco brews with different flavors and styles that will bring you an all-around island vibe. This pack contains:

Whale’s Tale beer is an English-style pale ale named in honor of Nantucket’s whaling history. It continues to gain attention, showcasing its excellent flavors and aromas. Here’s a quick recap on some crucial points we mentioned in this article:

Grab a Whale’s Tale beer to enjoy its flavorful quality that will liven up your day — cheers!